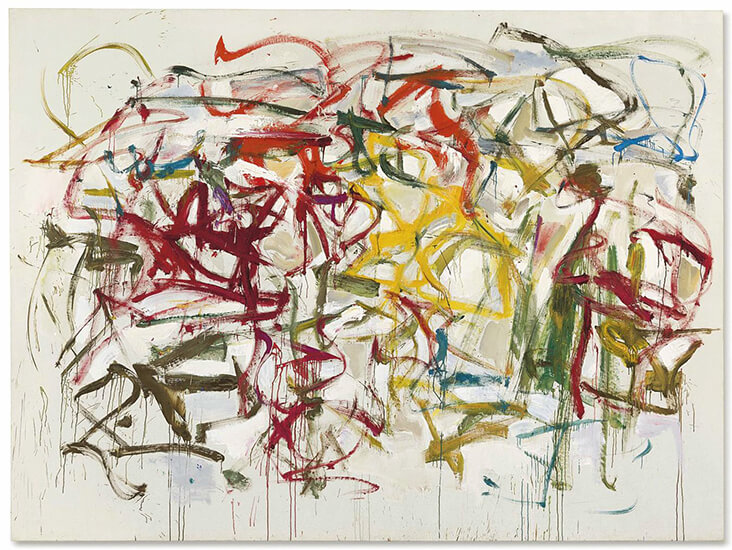 BEET RED Linen’s deep crimson burrows through Joan Mitchell’s paintings like the roots of an ancient tree, twisting and turning with a live, pulsating energy. Leader in the second generation of Abstract Expressionists throughout the 1950s, Mitchell pioneered a daring and adventurous approach to painting, allowing wild tangles of paint to become dense networks of fertile colour. Landscape was a driving force in her practice but she painted from memory rather than life, responding intuitively to the innate rhythms of nature. She wrote, “My paintings aren’t about art issues, they’re about a feeling that comes to me from the outside, from landscape.” 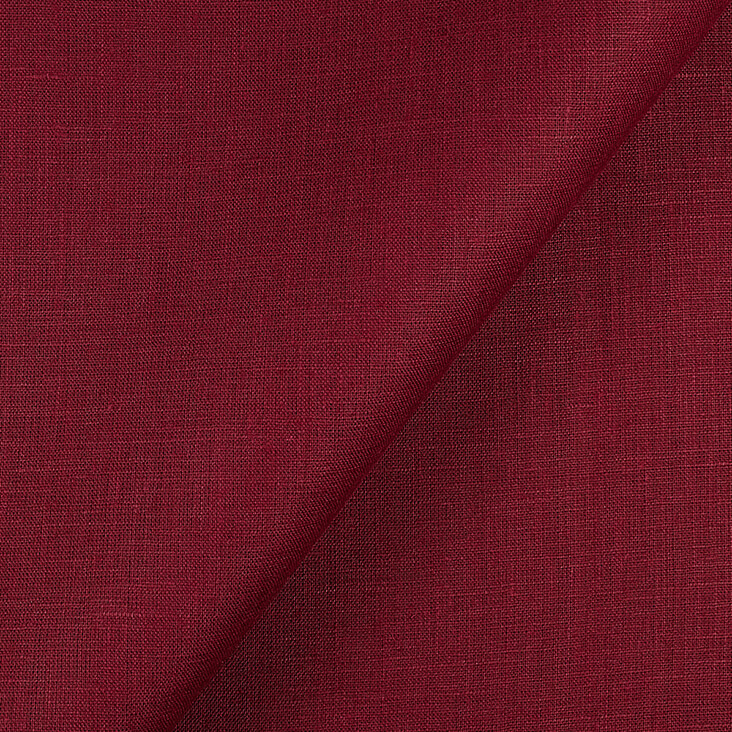 Joan Mitchell was born in Chicago, Illinois in 1925. A bright and inquisitive child, Mitchell loved reading and poetry, and when she was just 10 years old her poem Autumn was published in Poetry magazine, where Mitchell’s mother worked as an editor. Throughout her adolescence Mitchell was daring and athletic, competing in various sports including horse-rising, diving and figure skating. Mitchell took on an English major at Smiths College, Massachusetts but she transferred two years later to study fine art at the School of the Art Institute of Chicago. In 1948 Mitchell took her first trip to France with funding from a travel scholarship, visiting Paris and the Cote d’Azur where she was dazzled by the vibrancy of the landscape. 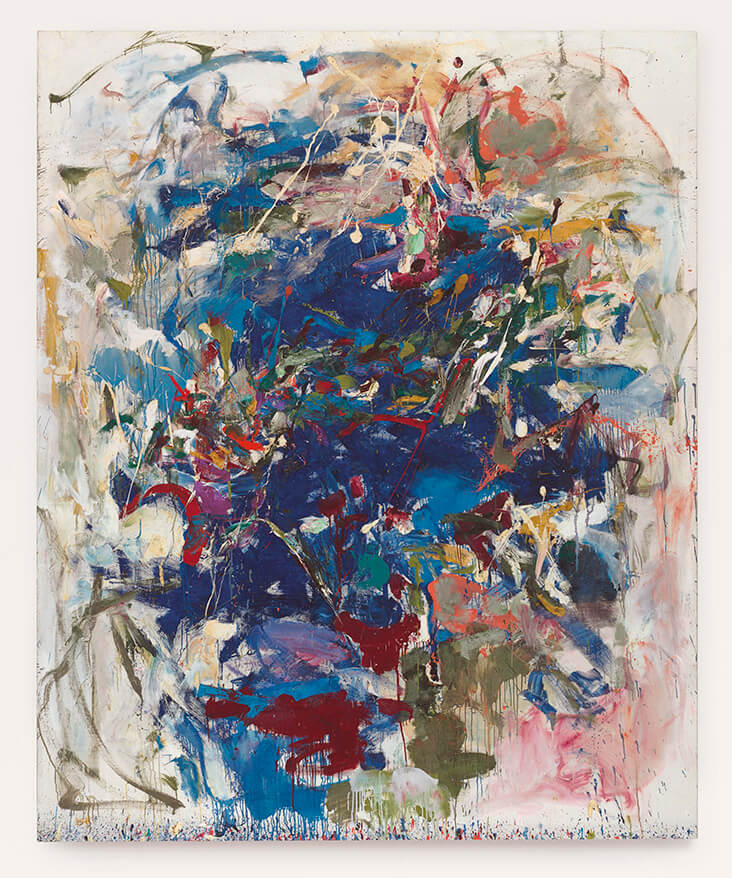 On her return to the United States, Mitchell took on a Master in Fine Arts degree from the School of the Art Institute of Chicago before moving to New York to pursue a career as an artist. In New York Mitchell soon integrated herself with the leading Abstract Expressionist painters including Willem De Kooning and Franz Kline and became one of only a handful of women associated with the downtown art scene. Throughout the early 1950s, Mitchell had a series of successful solo shows and took part in several major survey exhibitions, cementing her reputation as a leading figure in the Abstract Expressionist style. Mitchell’s paintings of this period demonstrated a fearless and adventurous approach to surface texture and colour, with wild, tempestuous strokes inspired by her travels to France, Long Island and beyond.

In 1952 Mitchell returned to France for an extended stay and during this trip she fell for the painter Jean Paul Riopelle; by 1959 she had moved permanently to France to be with him. Two of the major influences on Mitchell’s art of this period were Claude Monet’s late waterlilies, with their rippling movement and free, expressive paint, and the papercuts of Henri Matisse, containing striated bands of vivid colour. Untitled, 1958 demonstrates both these influences with loose, fluid calligraphic lines of intensely coloured paint that seem to shimmer across the canvas. Dense, naturalistic shades of green, brown and yellow suggest fertile undergrowth, while hot shades of magenta are sharp bursts of fruitiness, enlivening the swirling colours around it. 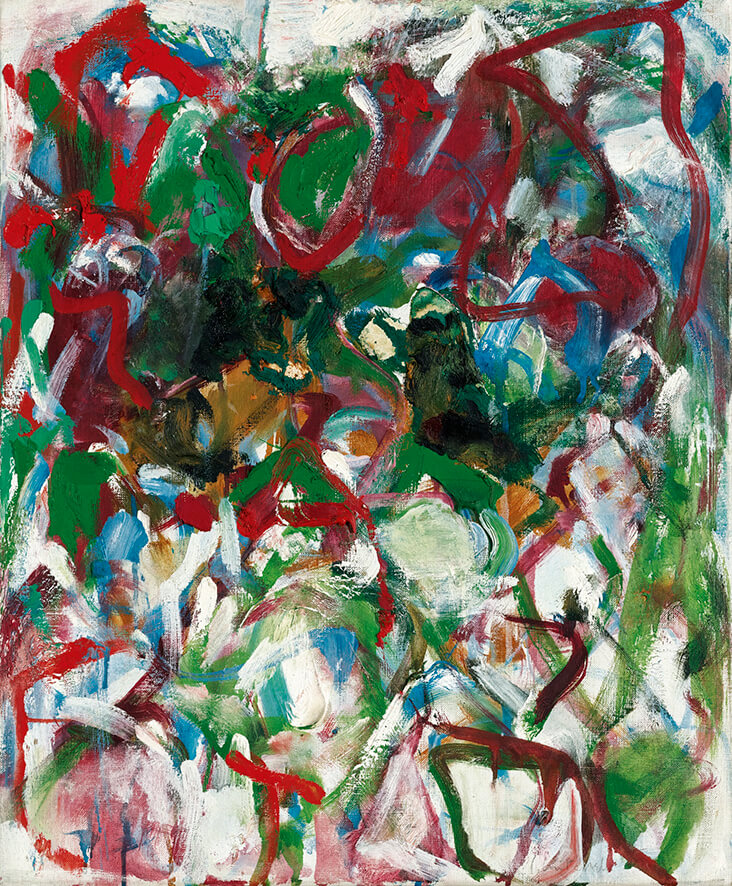 Many of Mitchell’s paintings of the early 1960s such as Untitled, 1960 introduced solid areas of colour in the centre of the canvas, from where tangled lines emerge organically like angry roots and shoots. In this painting smoky, hazy passages of brown and grey are shot through with wild streaks of raspberry and beetroot, bringing a crisp, sour vitality to the surface above them. Untitled, 1960 is denser and more complex, a billowing flurry of colour and movement as soft puffs of electric blue are woven into with blushing crimson ribbons. In the later Untitled, 1967 Mitchell take us closer to the action, packing the canvas tightly with a complex, intricately layered pattern. Threads of zesty apple green, cobalt blue and sharp crimson are interwoven into a loosely webbed blanket, enveloping the entire surface with the intoxicating power of colour. 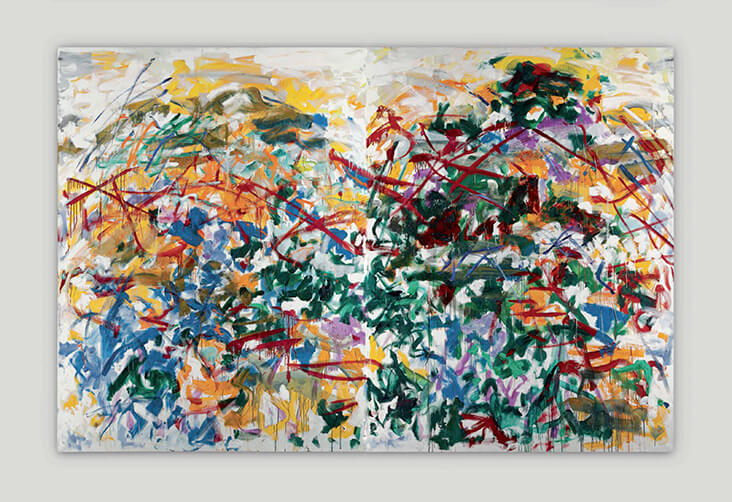 In 1968 Mitchell and Riopelle settled in Vethueil, near Claude Monet’s former home in Giverny, and like Monet, the vibrant, overgrown landscape was a constant source of inspiration for Mitchell. South, 1989 reveals Mitchell’s close affinity with the French countryside as wild tangles of colour become an overgrown garden of delights, one where violent streaks of deep red penetrate the scene with the shocking, fleeting intensity of summer flowers. “I get pleasure out of what happens visually,” said Mitchell, “Feeling, living, existing, I think it’s all the same thing…Painting is a way of feeling alive”.