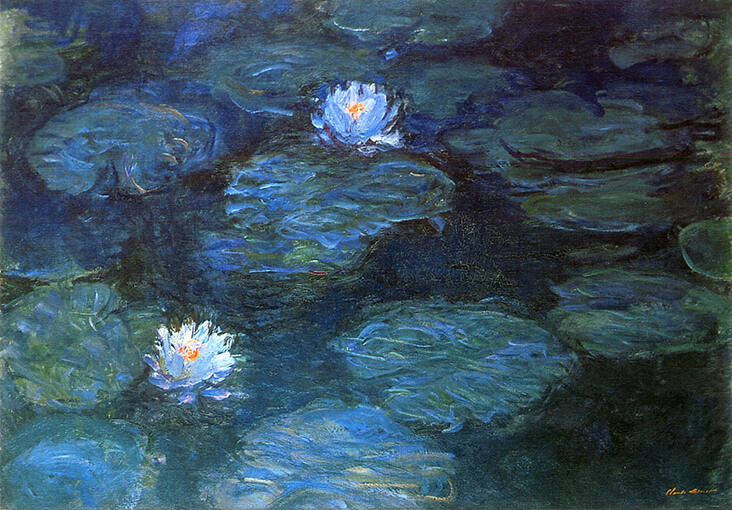 Cool and dark with just a hint of green, BLUE APATITE is a mysterious, naturalistic colour that has dominated some of the most famous artworks in the world. We particularly see this teal blue crop up in the art of many modernist artists, from the Impressionists to the Fauvists and the Abstract Expressionists. More often than not, it is employed to convey the rippling darkness of shadowy water, whose enigmatic depths hide untold stories. Three prominent artists who have played with the endlessly inventive possibilities within this shade of blue are Claude Monet, Maurice de Vlaminck and Helen Frankenthaler. 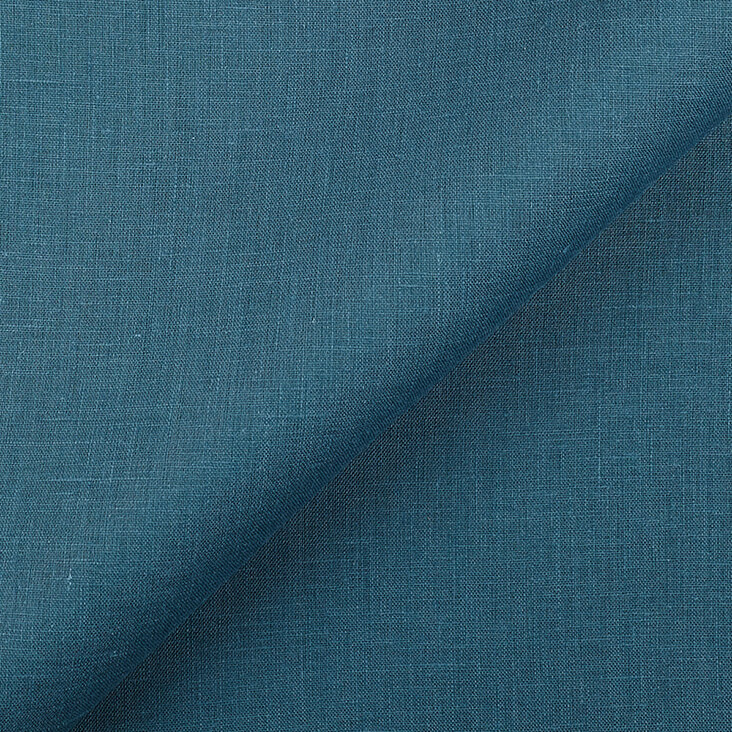 French Impressionist painter Claude Monet was, of course, no stranger to the colour blue – throughout his career, he was drawn to expansive skies and glassy reflections on water. His expressive, luminous en plein air paintings often flicker with shifting patterns of blue light. But it was in his late career that Monet’s attraction to blue became truly spectacular, dominating the entire stretches of his increasingly abstract paintings. By now settled in his famed water garden at Giverny, Monet zeroed in on the reflective surface of the water, removing any traces of sky or land. Instead, he pulls us in to a weightless, borderless, floating paradise. In the painting Waterlilies, 1899, Monet paints a hidden corner of his garden that is drenched in cool shadow. The surface of the water shimmers in and out of dappled sunlight, moving from teal blue to dark navy and forest green. On its surface, Monet scatters the leafy forms of the waterlilies, painted with ice cold shades of mint green, pastel blue, white, and just a hint of warm yellow. 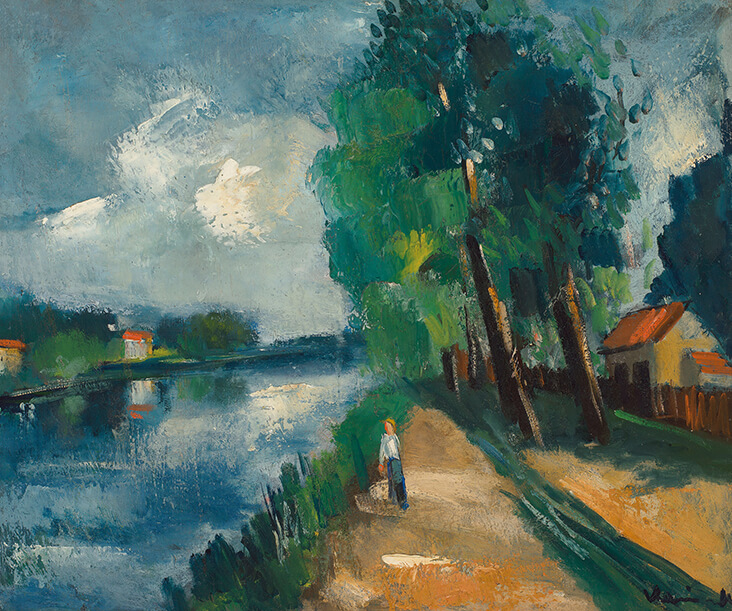 Much like Monet, the French Fauvist painter Maurice de Vlaminck looked to the natural world for his subject matter, and he also painted directly from life. But Vlaminck’s use of colour was more forceful and charged, derived as much from nature as the wild, turbulent inner workings of his mind. Meanwhile, his brushstrokes were bolder, bigger, and gutsier. Promeneuse au Bord de la Rivière, 1918 was made early in Vlaminck’s career, when he had recently begun making his name as a leading Fauvist alongside his contemporaries Henri Matisse and Andre Derain. Here a simple amble through the French countryside, along a riverside track, becomes a dynamic patchwork of living colour, veering close to abstraction. Warm, rusty shades of burnt orange and yellow ochre colour the dusty track and terracotta roof tiles, while smudges and swipes of apple and forest green in the grass and trees draw us to the water’s edge. Vlaminck’s water, by contrast, is awash with cold, translucent light, and patches of mesmerising dark blue shadow. 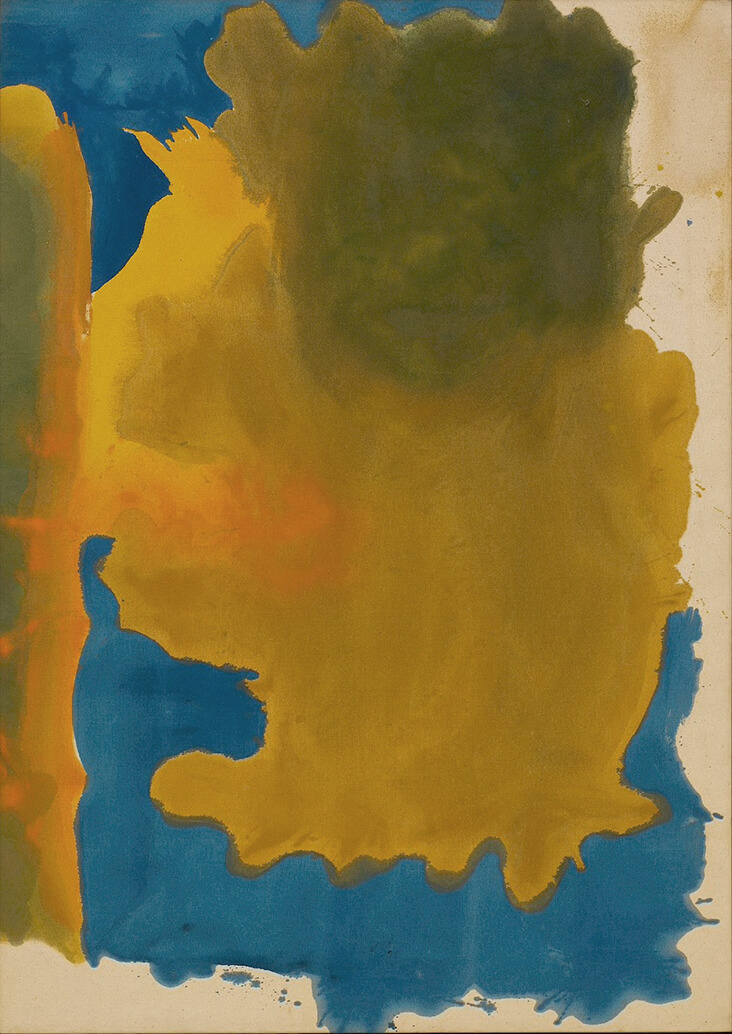 Many years later, American Abstract Expressionist Helen Frankenthaler looked back to the watery, light-infused art of modernist Europe. But she also looked forward to something new, a more spontaneous way of working that divorced art from the shackles of representation. Instead, she painted from memory, letting diluted pools of paint soak into her vast stretches of un-primed canvas. Blue was one of her favourite recurring colours – she saw it in the invocation of place, memory and the transience of the natural world. In the dazzlingly bright Canal, 1963, Frankenthaler creates a direct, punchy colour contrast, merging BLUE APATITE’s dark teal with the richest shade of golden yellow, letting the colours pool organically into one another, while tinges of moss green and dark orange form accents here and there. With simple, direct colour and the spontaneity of paint, Frankenthaler suggests the wide-open space of an aerial landscape, where the water of a canal laps at the edges of the golden, sun kissed land.