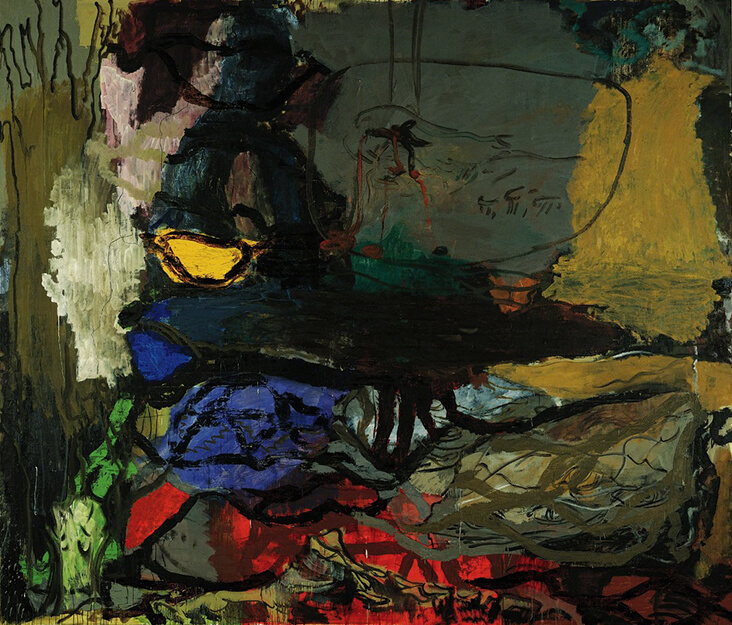 Painter, poet, filmmaker and sculptor, Danish artist Per Kirkeby had a prolific practice spanning multiple styles, but underpinning his ideas was a fascination with the structures and patterns of nature. The fertile, olive shade of green in DRIED HERB Linen appeared often in his evocative, expressive paintings, a colour that allowed him to express the emotional beauty and power of the Danish landscape. His view of nature was seen at ground level, where wild tangles of leaves and bracken allow new roots and shoots to emerge from their depths. 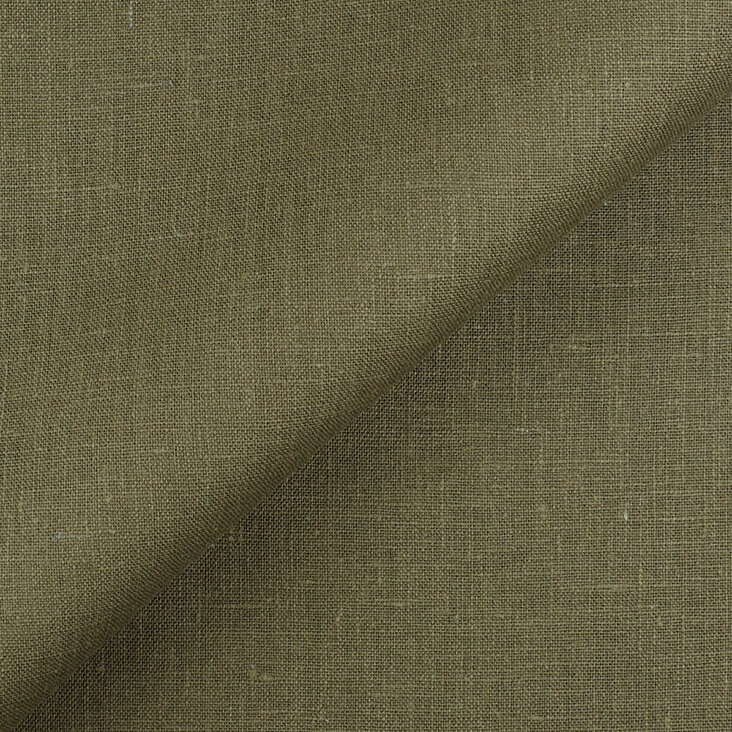 Kirkeby was born in 1938 in Copenhagen, and showed an interest in both nature and art from a young age. He began his career with a degree in natural history from the University of Copenhagen, followed by a masters in arctic geology. This fascination with geology, nature and the Danish landscape would later become the cornerstones of his artistic practice. In the early 1960s Kirkeby’s drive to be an artist pushed him to enrol in the Eksperimenterende Kunst-skole (Experimental Art School) in Copenhagen, where he interacted with various leading avant-garde artists including Joseph Beuys and Henning Christiansen. As an art student and young graduate Kirkeby explored a range of styles, joining the Fluxus group for a spell, as well as trying out Pop Art, Tachisme and Abstract Expressionism.

Throughout the late 1970s and 1980s Kirkeby focussed on what would become his signature, abstract landscapes. He took a non-traditional approach, focussing on the wild, uncontrollable energy of the undergrowth as opposed to the sublime scenery we so often see in landscape art. Structure, he argued was a fundamental component in these almost-abstract, expressionist paintings, echoing the underlying order of nature. “A structure-less painting is, to me, a painting that does not matter,” he observed, adding “Structure mirrors your degree of responsibility toward the work. You can’t just let it float around in pretty colours. It needs a kind of core.” Deeply spiritual, these paintings were less about conveying a literal translation of nature, and more about capturing its inner, poetic order. It was this balance between expressionism and symbolism that earned Kirkeby the title of “lyric expressionist” in the years that followed. 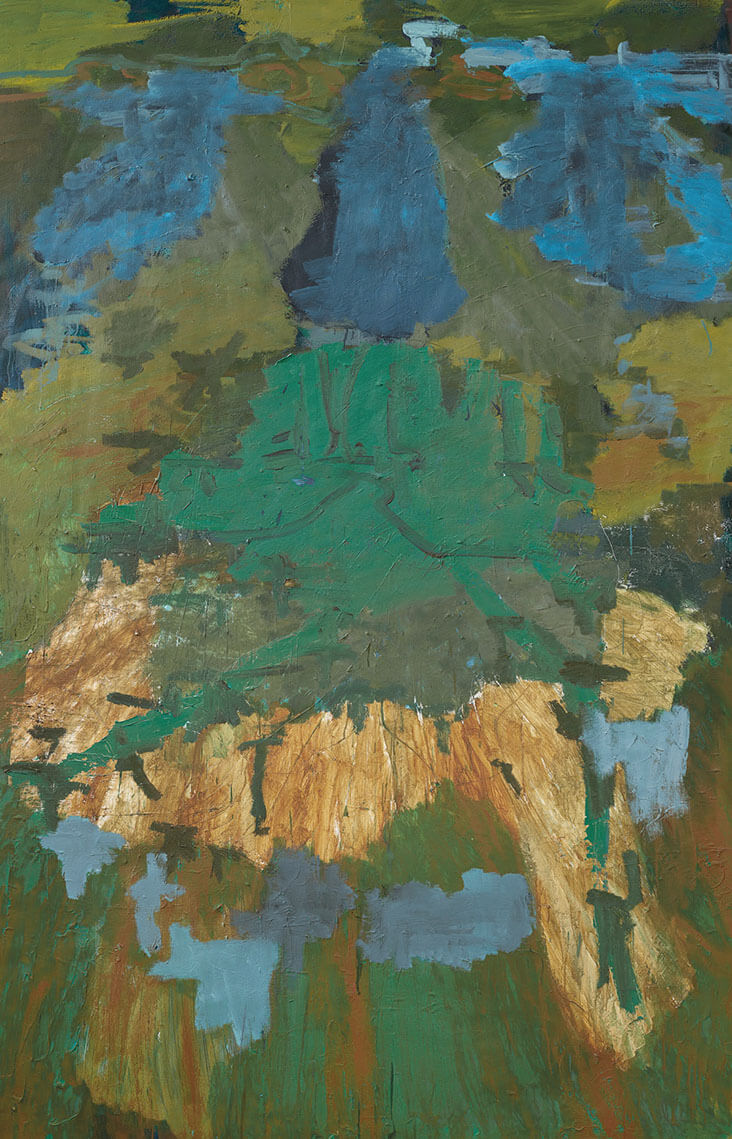 Because Kirkeby’s paintings were so focussed on nature, green was inevitably a core component. He relished in the rich variety of greens he could scratch, scrape and smear onto his lively, spirited canvases, so filled with energy and life. In the sensuously expressive Nach der Abnahme, (After Acceptance), 1988, deep shades of olive green suggest shadowy areas of nature left to roam wild and free, untouched by human hands. On the surface of this green patchwork, angry scrawls of black and red form a complex network of lines that mimic the squirrelling roots lying under the soil. Die Zeit Nagt III (The Time Gnaws III), 1992 is more map-like, with contoured shapes slotting into one another like patches of land. Deep green is the grounding colour here, evocative of energy and growth. 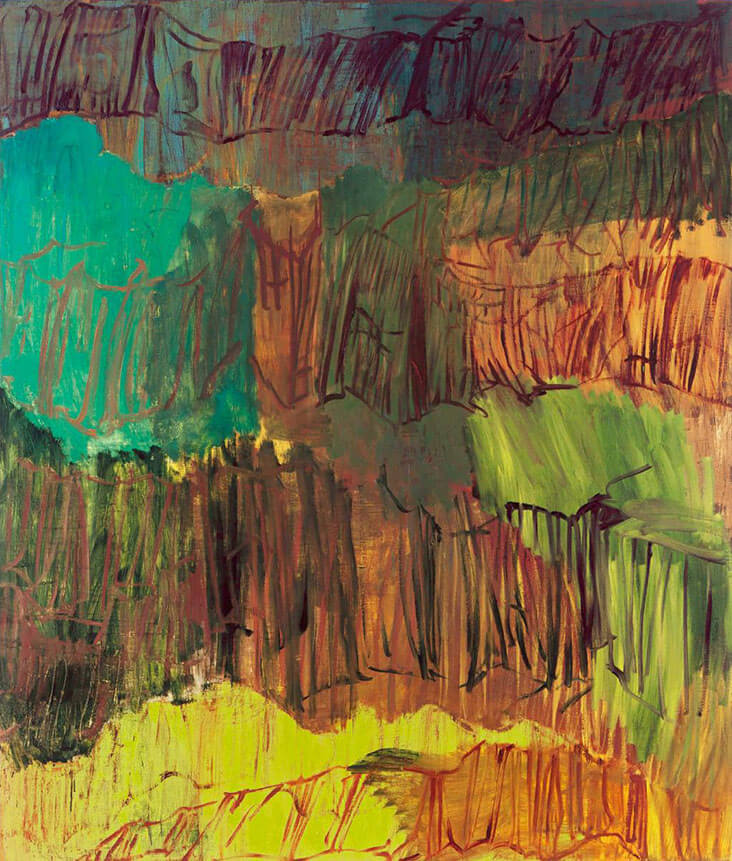 In the later Herbst-Anastasis III, (Autumn Resurrection), 1997 a dusty shade of deep olive is scumbled across the centre of the image, a grounding central point from where all the other colours seem to grow. Unusually Kirkeby juxtaposes this deep green with an iridescent shade of aqua blue, causing a jarringly sharp contrast. Again, Kirkeby plays with the way layered structural lines can bring in an almost architectural order to his image, drawn with deep red that frays here and there like the broken twigs or rugged branches we so often see in the dark pockets of the undergrowth. Herbst-Anastasis IV, (Autumn Resurrection), 1997 is a part of the same series, a sister image that is brimming with animated marks and lines. Green also dominates this painting, streaked and smeared in a myriad of complex shades that weave into one another like a densely layered quilt, while scrawled lines on top are like stitches, holding them all together.