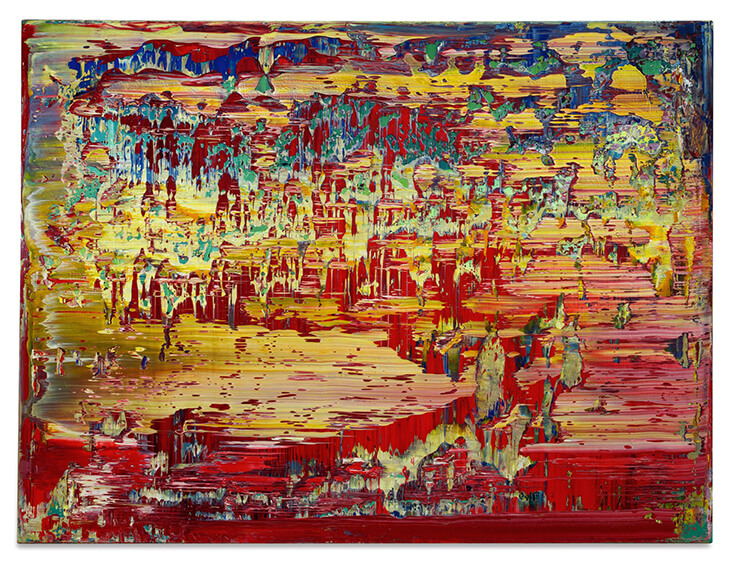 MAROON Linen’s deep, dark red often appears in the art of German painter Gerhard Richter, smeared across his canvases in daring streaks of deliciously thick oil paint. One of the most prominent living painters in the world, Richter’s art has encompassed a huge range of styles, from monochrome photorealism to expressive abstraction and almost everything else in-between. But at the heart of his practice is a fascination with the relationship between painting and photography, and the ways the two have become so enmeshed in the 21st century digital age. His abstract paintings seem to emanate a glowing, photographic light, a quality that is emphasised by his daringly bright, high contrast colour schemes. 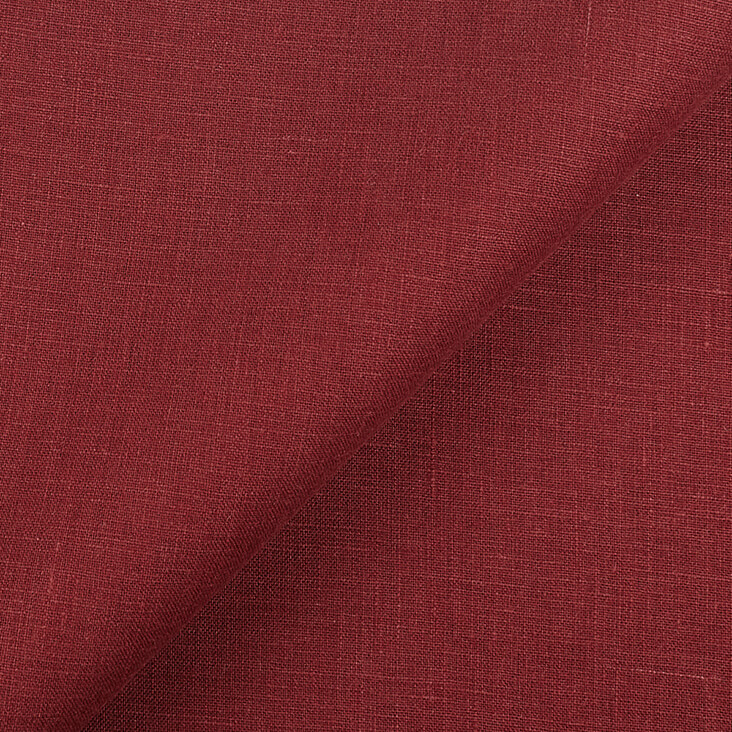 Richter trained in Soviet run Dresden as a Socialist Realist mural painter in the 1950s, and in his early career, he made several large-scale public artworks throughout East Berlin. But by the end of the 1950s, the pressure to “fall in line” with governmental styles was becoming too restrictive. A turning point for Richter came following a visit to the radical exhibition Documenta II in Kassel, where he encountered the subversive art of Jackson Pollock, Jean Fautrier and Lucio Fontana. In 1961, Richter left East Germany for the west. He enrolled in the renowned Dusseldorf Academy,  which placed an emphasis on radicalism and experimentation, and he was famously taught by Joseph Beuys. Richter’s experience here was nothing short of life-changing, altering his entire attitude towards art. 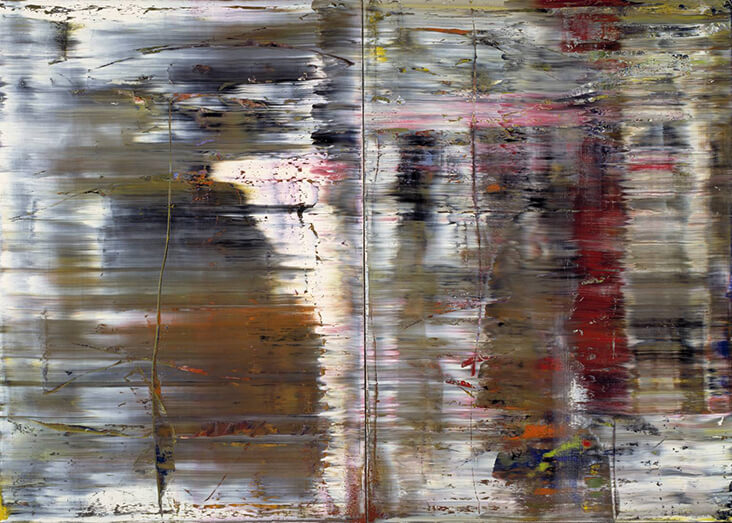 Following his years as a student in Dusseldorf, Richter became a founding member of the Capitalist Realism movement, a group self-proclaimed as Germany’s answer to Pop Art. Richter’s earliest art of this period toyed with the way politically loaded images lifted from newspapers and magazines could be incorporated into his art. He developed his trademark ‘blur’ technique in the 1960s, painting photographic imagery with a hazy, airbrushed quality that created a deliberate distance between the viewer and the image. Painting blurred imagery was Richter’s first exploration of abstraction, and it would become a catalyst for his vast abstract paintings to follow. 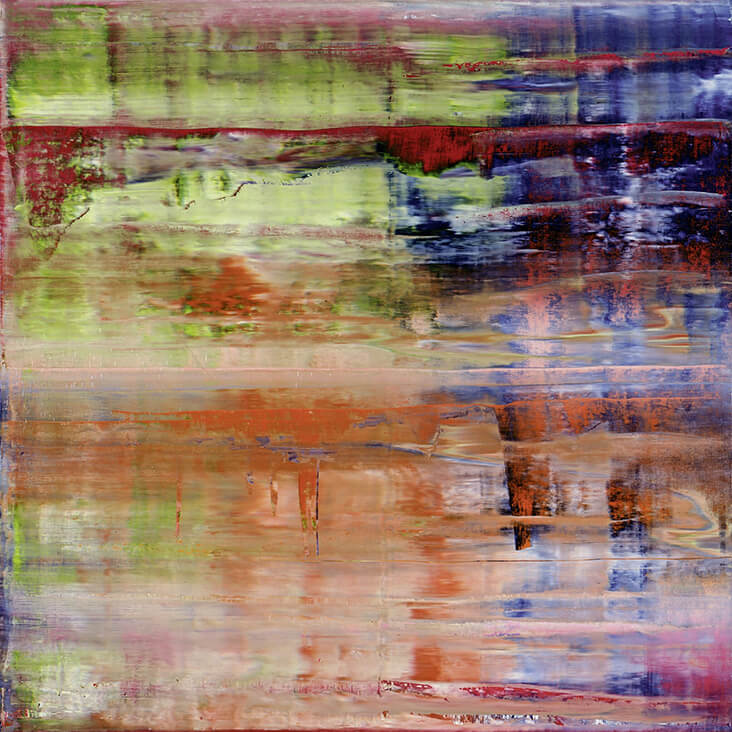 It was in the 1970s that Richter first began making abstract paintings, and by the 1980s he had perfected a process that occupied him for several decades to follow. First, he would paint bands of colour onto huge, wall sized canvases and let them dry. Over these bands he would squeeze out thick ribbons of oil paint, and, using a squeegee made from a long wooden ruler edged with a strip of rubber, he would pull the wet paint over the underlayers so it formed smooth, blurred lighting effects like an out of focus photograph, leaving the layers underneath peeking through. This almost mechanical process gave Richter the complete creative freedom to play with vivid colour relationships, as seen in Abstraktes Bild, 1989,  a theatrical display of intensely bright colours streaked over one another including rich dark maroons, vivid reds, ultramarines and turquoise blue. 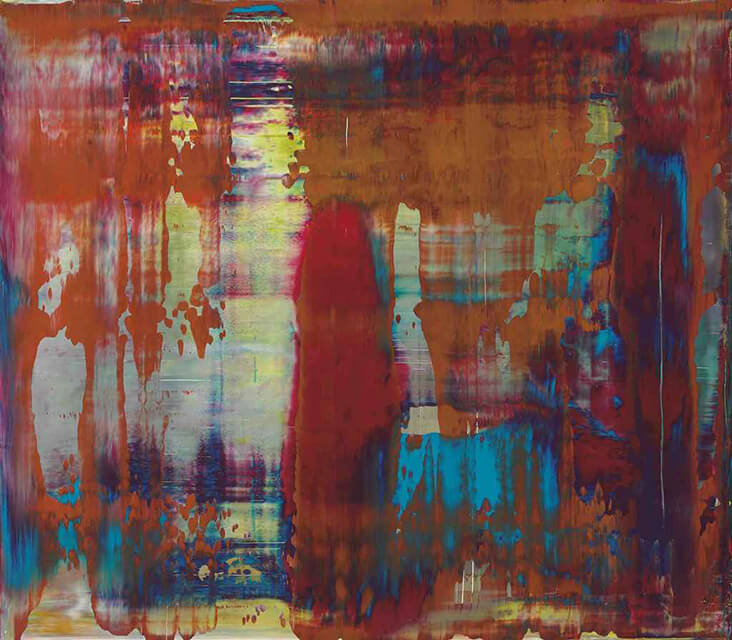 Made just a year later, the diptych painting Abstraktes Bild, 1990 is smoother in finish, with a glossy, almost metallic sheen that runs horizontally across our line of vision. In its centre, a streak of white appears to catch the light, flickering in uneven ripples as if moving on water. Next to it, underlayers of dark red peek through, adding dark layers of depth and intensity to the image. Abstraktes Bild, (811-2), 1994 has a similar slippery, wet quality, suggesting glassy reflections caught on a shimmering lake. Pale green and orange shades are contrasted with the deepest shade of burgundy red, violently streaking across the upper image like a wound or tear. Abstraktes Bild, 1997 plays instead with vertical bands of paint pulled top to bottom in deliciously thick streaks of oil paint. Warm tones of maroon and burnt orange creep in on the image from the edges, gradually eclipsing traces of pale, translucent light with their glowing embers, and they seem to suggest the descent of day into a warm, silently layered dusk.