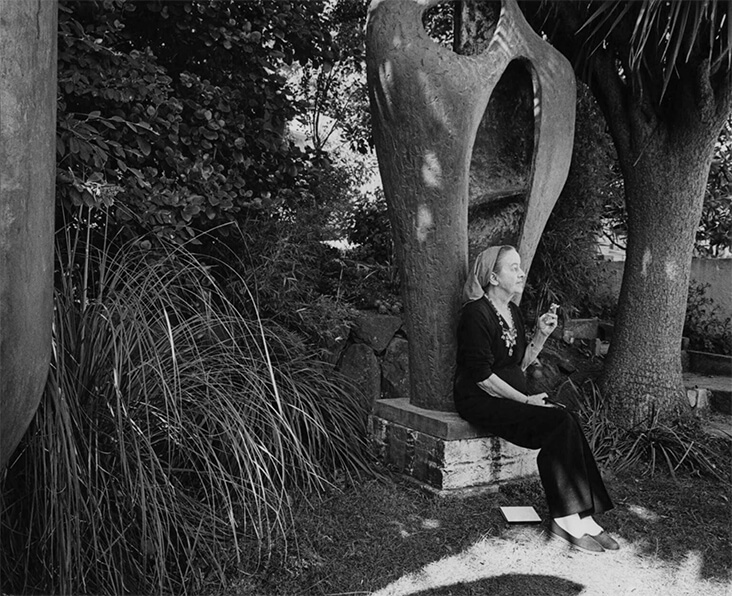 Like many artists of her generation, mid-20th century sculptor Dame Barbara Hepworth saw the importance of honing an intimate personal style, one that could reflect the same language as her art. And like her bold, sleek sculptures, her way of dressing was equally as elegant, classic and refined, often with practicality in mind. Along with her interests in fashion, Hepworth also tried her hand at textile design from the 1930s onwards, and many of her printed textiles from this period were realized as curtains and furniture fabric, demonstrating the wide scope of her creative practice.

Hepworth was a radical for her age, a bold pioneer who broke new ground. Earning a place to study at London’s Royal College of Art in 1920s London, she fearlessly fought for her place as an equal amongst her predominantly male peers. In London, while making her name as an artist she experimented with a broad range of mediums. Though she was primarily a sculptor, she tested out how her linear, drawn designs that suggested movement and form could be translated onto printed fabrics throughout the 1930s. It was a process she would return to again throughout her career, playing with how her distinctive, minimalist language could become flat, decorative pattern. 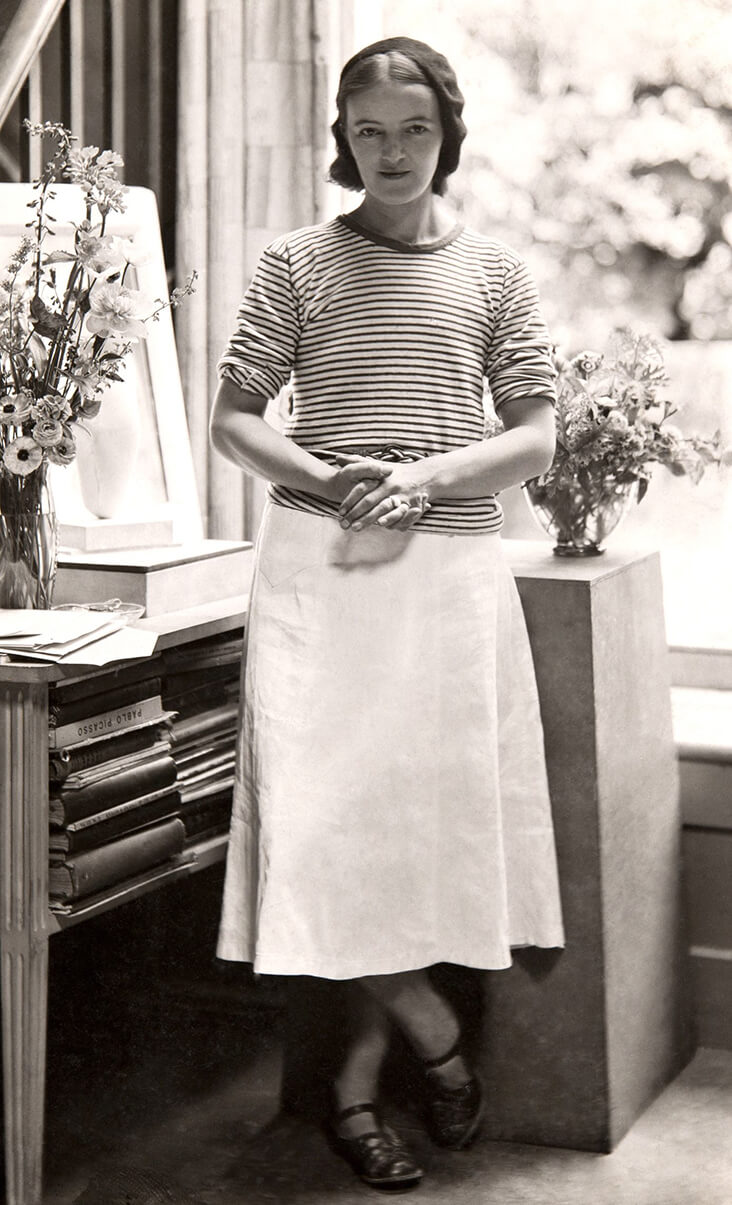 Barbara Hepworth in the 1930s

As her career as an artist grew and she began appearing in publicity shots, we see how Hepworth’s sense of personal style became important to her as a means of self-expression. Refusing to bow to stereotypes of ‘feminine’, Hepworth chose instead to dress in bold, simple shapes that leaned towards androgyny, much like Georgia O’Keeffe once had a generation earlier. This utilitarian style mimed the simple, minimal purity of her art. As a young artist in London, photographs show Hepworth wearing classic French- style clothing with an emphasis on comfort, including striped t-shirts, duffle coats, flat shoes and wide, long skirts.

Later, while living in St Ives in Cornwall, Hepworth wore clothes adapted to the cold weather, but they were still styled in her own considered way. She wore elegant shawls, loose smocks, printed silk head scarves, boiler suits and soft denim shirts with sleeves folded up. In the colder weather she added short duffle coats with enough give that allowed her to draw and sculpt unhindered outdoors. Hepworth was a mother to four young children by now, and spent much of her time doing practical activities, so clothing choices had to fit this active life. Contemporary British fashion designer Margaret Howell observed of Hepworth, “She was a woman to roll up her sleeves, and a woman who needed pockets – for chisel, pencil, and pebbles from the beach.” 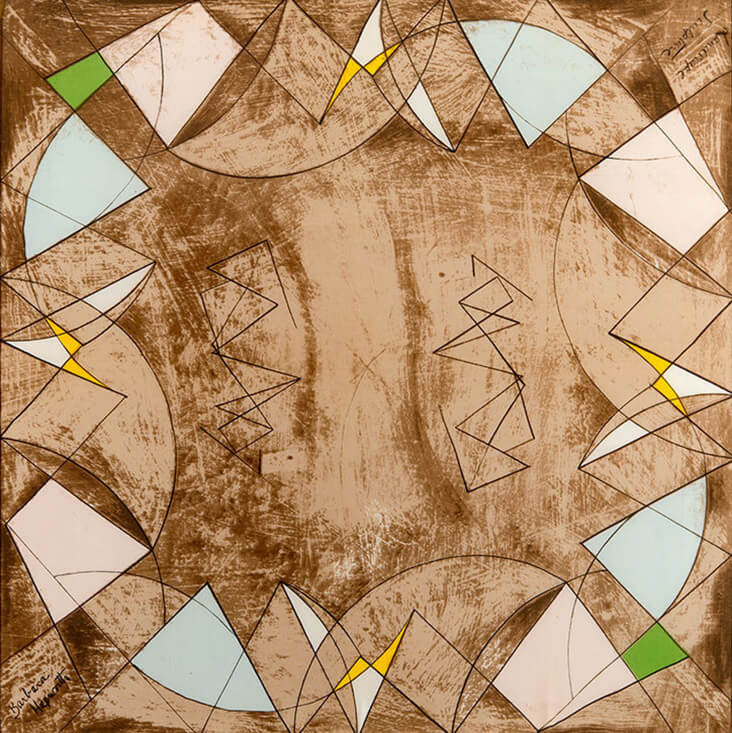 In St Ives, the textile company Porthia Prints was established as a commercial venture, and local artists were invited to submit designs which would be screen printed onto linen table mats. Hepworth produced a series of prints here, each with the same retrained minimalism and elegance as one would expect from her. In 2015, Tate Gallery paid tribute to this lesser-known strand of Hepworth’s practice, dedicating the design of a garden space overlooking the Thames to these same very table linens. 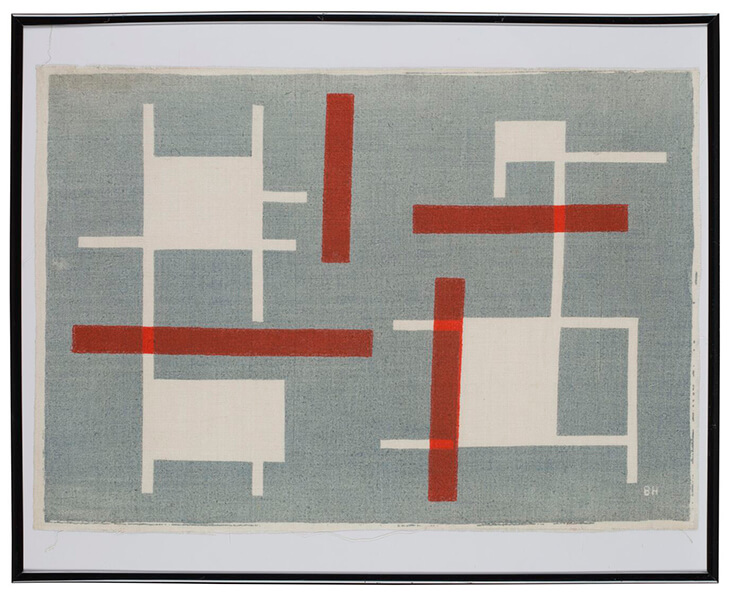 As Hepworth’s career as a sculptor expanded and she took on ever more adventurous public art commissions, often on a vast scale, Hepworth moved into a larger studio where she could really branch out and use her whole body in the process of making. The clothing choices Hepworth made, certainly for media shots, were simple and practical, yet remarkably stylish. When she is seen stretching out across epic, monumental sculptures mid-process, or pulling wet plaster over curved forms as it drips over her hands and arms, her clothing still makes a statement, with elegant head scarves pulling hair effortlessly back, while loose, masculine tailoring allows her to move freely across space. It was a timeless, understated style she had made her own, honed over the years to suit the needs of her lifestyle. 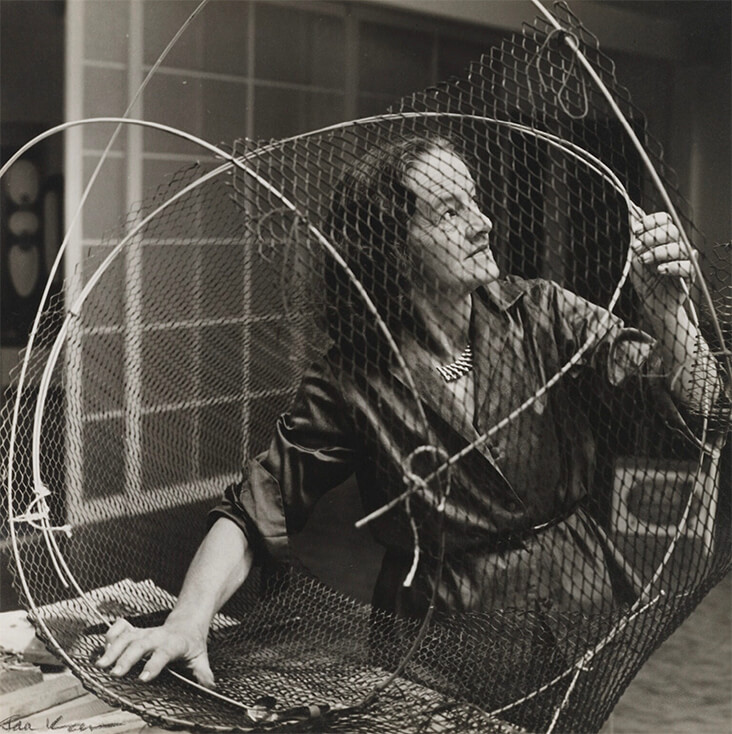 Hepworth undoubtedly left an indelible mark on the history of art with her bold, breath-taking sculptures, but her style has also had an influence on many creative voices since. American fashion and lifestyle company Permanent Collection were so inspired by Hepworth’s clothing they even dedicated their ‘Barbara’ coat to her, with its loose, flowing shape, unlined knit and large, low pockets. British fashion designer Margaret Howell has also often spoken of her admiration for Hepworth’s look, and in 2015 she dedicated an entire collection of clothing to Hepworth, to accompany Tate Gallery’s exhibition Barbara Hepworth: Sculpture for a Modern World. She commented, “Barbara Hepworth is one of a few special people who have inspired me – through her work, her life, and her style. I connect with her independence, strength and hands-on approach as an artist, but also with her choice of work clothes and the way she wore them.”