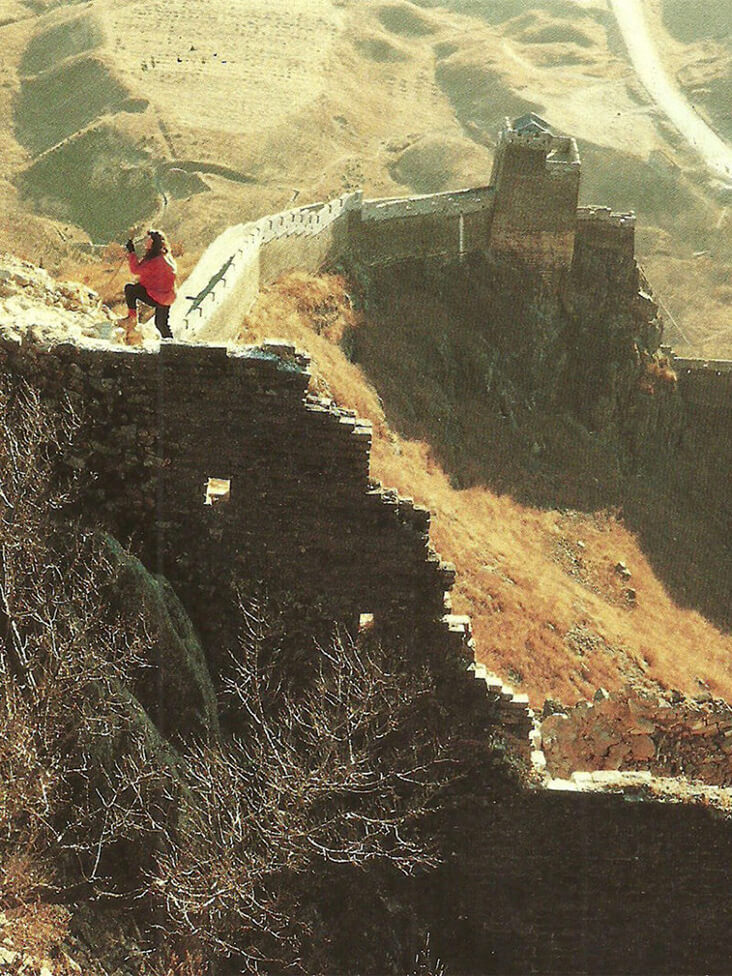 Marina Abramovic walking the Great Wall of China in The Lovers: The Great Walk, 1988, Public Delivery

With a successful career spanning more than 60 years, Serbian-American artist Marina Abramovic has jokingly named herself the “grandmother of performance art.” In this time, she has pushed her body to the extreme, inflicting pain, suffering, trauma and violence on herself in the name of art. Her work is no theatrical performance – instead it is the pain, gore and horror of real life up close and personal. She says, “the knife is real, the blood is real, and the emotions are real.” Unsurprisingly, given the bodily nature of her art, she has had a longstanding relationship with fabric and fashion, one that has shifted in different directions throughout the evolution of her practice, and her life.

Abramovic was born in Belgrade, former Yugoslavia in 1946. Her childhood was torn somewhere between communism and Catholicism, teetering between the two extremes that existed on different sides of her family. Catholicism, she has explained in various interviews, taught her about pain and self-sacrifice, while communism, on the other hand, showed her from a young age the political power of fashion. “There are codes and rules on dressing and behaving,” she has observed, explaining, “I came from a communist background where everything looked like a uniform. My mother dressed all her life in a double-breasted suit, very strictly buttoned up with a blouse. It created a certain idea of discipline and authority.” 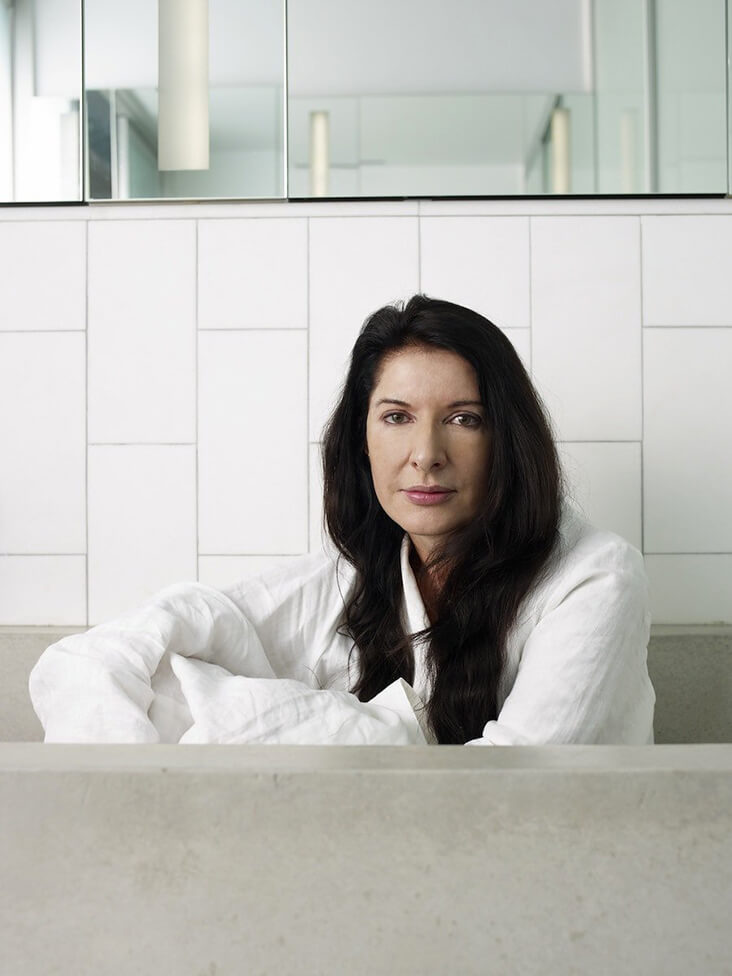 As a student at Belgrade’s Academy of Fine Arts in the 1960s Abramovic first began exploring the potential of performance art, often with a subversive, anti-establishment stance: “short, intense political pieces where I am plunging the knife between my fingers and cutting the communist star on my body”. Just a decade later she was making waves as an art world tour-de-force, with pain, endurance and human suffering playing central roles in her performance.

Clothing, if she wore it (she often performed naked), was minimal, austere and androgynous – white shirts, high collars and black skirts or trousers – an act of defiance against the overtly feminine, and a nod to her communist childhood. Ulay, her male co-collaborator and romantic partner of the 1980s would also wear the same austere, simple silhouettes. Red later appeared in her arsenal, the colour of passion, blood, torture and pain writ large in long, draping jackets and gowns. She had little interest in high fashion at this time, choosing clothing instead for political and personal reasons, as she explains, “In the 1970s I was never interested in fashion. I thought that to be fashionable was to be a less good artist.”

In 1988, Abramovic and Ulay arranged the ultimate act of union, agreeing to walk the great wall of China from opposite ends, meeting in the middle where they would marry. For the walk of a lifetime Abramovic wore baggy red clothes so she could be seen from a great distance by viewers looking on, who affectionately named her “Pa Ma Ta Je”, meaning “big fat sister mother.” Though the love between Abramovic and Ulay was not to last, the walk profoundly affected Abramovic, changing her attitude towards both her body and the clothing she wore. She said, “After I walked the Great Wall of China, which was a great achievement in my life that changed my career, I decided that I didn’t need to prove anything to anyone anymore.” 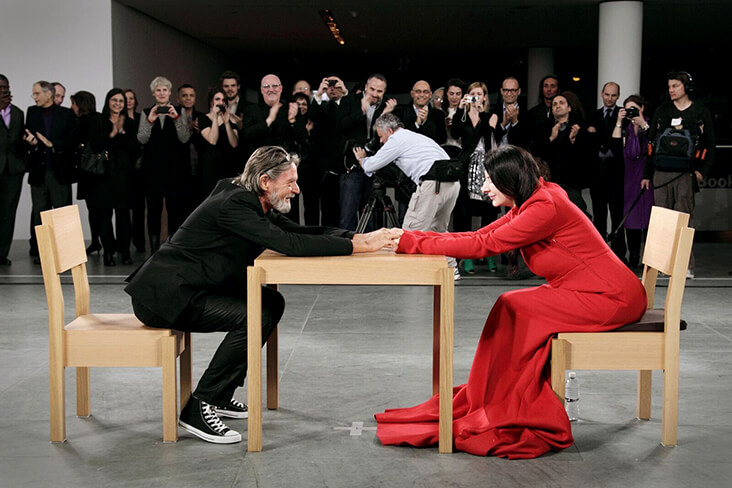 For the first time in her life, she began engaging with luxury clothing, tapping in to what she called “a secret desire to engage with fashion which I never admitted to myself.” Having more money as her reputation grew gave Abramovic freedom to select a quality of clothing she had never encountered before. She said, “the first time that I ever had serious money, I bought a Yamamoto suit. I felt so good in it, and without guilt! After that, I openly started being interested in fashion and tried to create my own style using different elements of what was fashionable at that moment.”

In the next decade, Abramovic struck up a friendship with the fashion designer and Burberry Creative Officer Riccardo Tisci, and he introduced the artist to the wonders of fashion and clothing. Since then, her relationship to costume, fabric and fashion has remained a close one. In contrast with the self-destructive nature of her earlier art, more recently Abramovic has been exploring the nourishing nature of clothing, a concept she first opened up through her “Energy Clothes” made in collaboration with Net-a-Porter. These vivid, batwing bodysuits were designed with magnets hidden inside the material, which the artist believed could “energise the body.” 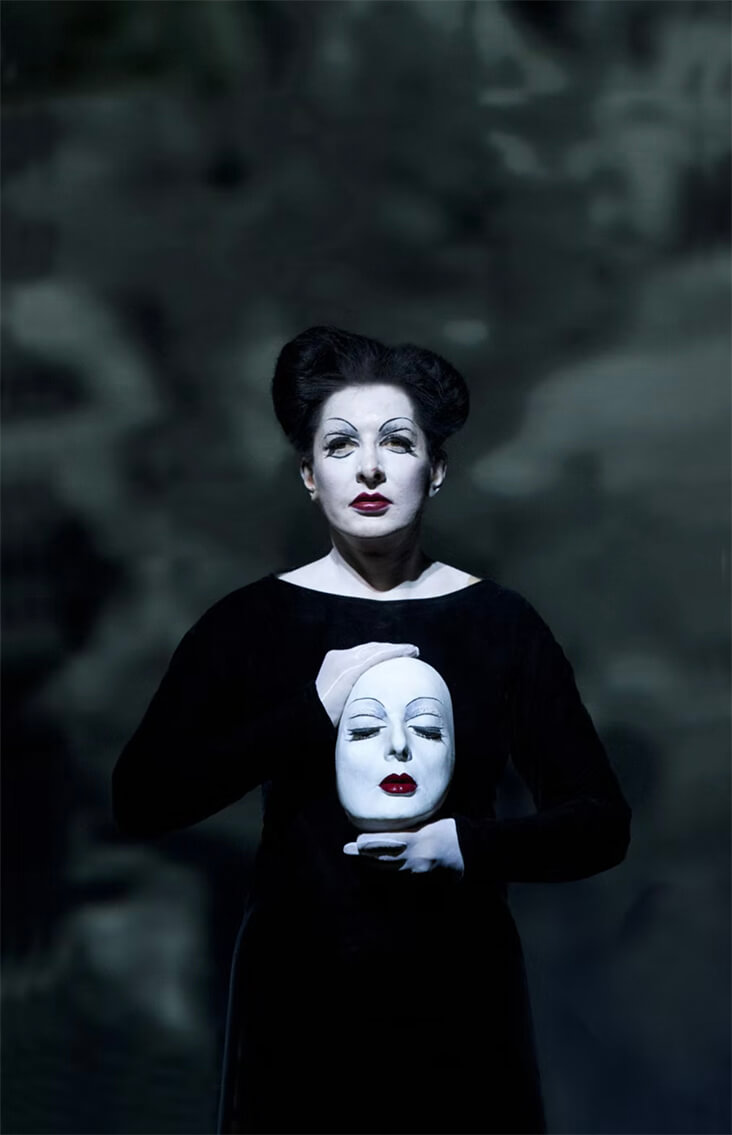 In her recent, stirring performance at New York’s Museum of Modern Art, titled The Artist is Present, 2010, Abramovic wore a striking, long red gown resembling a Cassock, and sat, unmoving for eight hours a day, over a 3-month period. Visitors were invited to lock eyes with her on the chair opposite, communicating silently, visually, across a table. The red gown here gave her a commanding, almost Biblical presence. In 2019 Abramovic ventured into new territory once again, writing an operatic performance titled 7 Deaths of Maria Callas, 2019, a tribute to the iconic singer with whom Abramovic has long felt a connection to. Abramovic brought her close friend Tisci in to create the awe-inducing, theatrical costumes which aid in the storytelling experience. These ventures demonstrate Abramovic’s open-ended, fluid approach to art, fashion and everyday life, which she blends seamlessly into one another. She says, “…now artists collaborate openly with fashion designers, which I think is the way to go. We can’t exclude fashion from our lives.”