Identity and Belonging: A Brief History of Asafo Flags 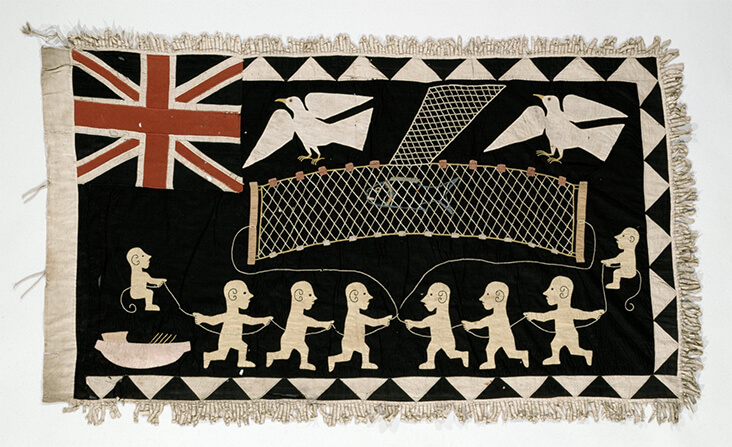 Asafo Flag, ca. 1863, The Detroit Institute of Arts, the message is: Europeans erected a strong stone fort (Anomabu Fort), but Africans can use many men to “catch” the fort.

Asafo flags are one of Ghana’s most fascinating historical artefacts, telling vivid, colourful and intimate stories about Ghanaian culture. These vibrant and spirited flags are a 400-year-old tradition of making that has been passed down through one generation to the next, and amazingly, they are still being made today. Older flags act as cultural emblems embedded with rich pictorial stories of the past, and it is this loaded history that has made Asafo flags such objects of interest for so many collectors and museums today. In this second article on Asafo flags we will look into their historical development in more detail, and the great significance they have held for Ghanaian people.

The history of Asafo flags has been tracked as far back as the 16th century. It was during this time that Europeans began to arrive on the southern coast of Ghana, some settling, and others forming trade routes from Europe to the Gold Coast. African markets were enthusiastic buyers of European fabric, and it was in part this abundance of cloth that led to the development of flag-making traditions. Although there is little surviving evidence of the earliest Ghanaian flags, it is thought they might have been originally painted onto raffia, before being replaced with appliqued cotton. 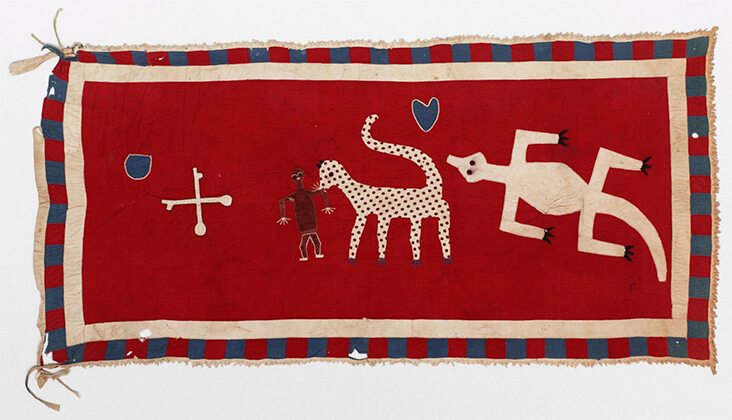 Asafo Flag made by the Fante people, early 20th century, The Detroit Institute of Arts

During the 1700s Europeans began to form alliances with the Fante people living along the southern coast of what is now known as Ghana. Different rival military companies were set up in towns all along the coastline, each affiliated with the British in different ways, and each protective of their own territory. It was from these military groups that the name Asafo, or “War People” was developed – ‘Sa’ meaning war, and ‘Fo’ meaning people.

Each military group began making their own flags, known as Frankaa, as symbols of their individual identities. Rather than having a single flag, each group had multiple flags which carried different meanings and significance. Whenever a new member joined ranks, a new flag would be made in their honour, and flags were also made to mark significant occasions such as festivals and funerals. This evolved into dramatic ritualistic dances with Asafo flags being unfurled and waved around that were performed by men to large community audiences. 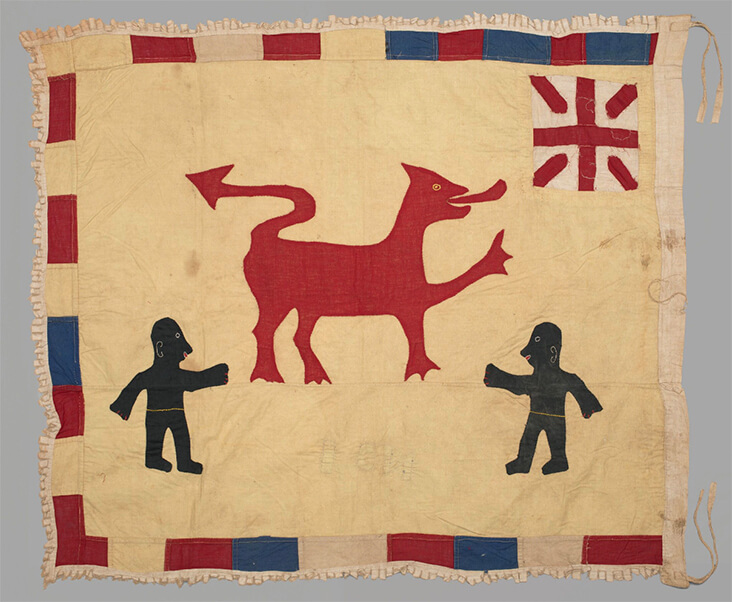 Asafo Flag made by the Fante people, between 1950 and 1959, The Detroit Institute of Arts

The aesthetic of Asafo flags was in part inspired by naval insignia, military regalia and banners. We can immediately see this in the Union Jack that was stitched into the corner of early Asafo flags, its ever-present motif indicating the problematic colonisation that was going on in Ghana during this time. Another trademark feature in Asafo flags was the inclusion of a border around the main picture, made in a detailed pattern to create an eye-catching frame. This was usually outlined by a fringed edge. Fascinatingly, despite all these similarities between flags, it has been noted that no two flags are ever the same – each one is its own work of art.

Within the main body of the flag symbolism was even more important. A pictorial language of storytelling evolved that could communicate the values and moralities that were most significant within the group’s community. Some illustrated Ghanian proverbs and allegories, usually featuring animals and mythical beasts as emblems of cunning and power, such as lions, crocodiles and dragons. Over time, the flags became potent branding tools, not just to ward off outside threats, but to create a deep sense of belonging, pride and identity. We also see in some flags the illustration of significant moments in Ghanian society, such as the arrival of European ships, the laying of railway lines and the introduction of aviation. 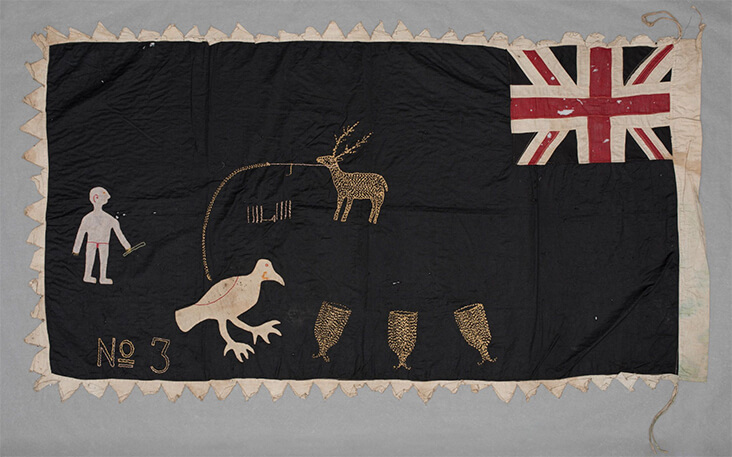 Asafo flag made by the Fante people, 1863, The Detroit Institute of Arts

Flags were traditionally made by men, who were trained as master applique flag makers, and they passed their skills on to sons and nephews as apprentices. The flags themselves were also passed down through families, and as such, they have become foundational roots of Ghanaian culture that continue to grow to this day. British historian Gus Casely-Hayford has experienced this first hand by visiting his own family’s historical textiles in Ghana. He points out how the wear and tear of these objects is a physical marker of their beloved, deeply personal and intergenerational significance, noting how we can “show respect by using things rather than by trying to hold them in aspic.”