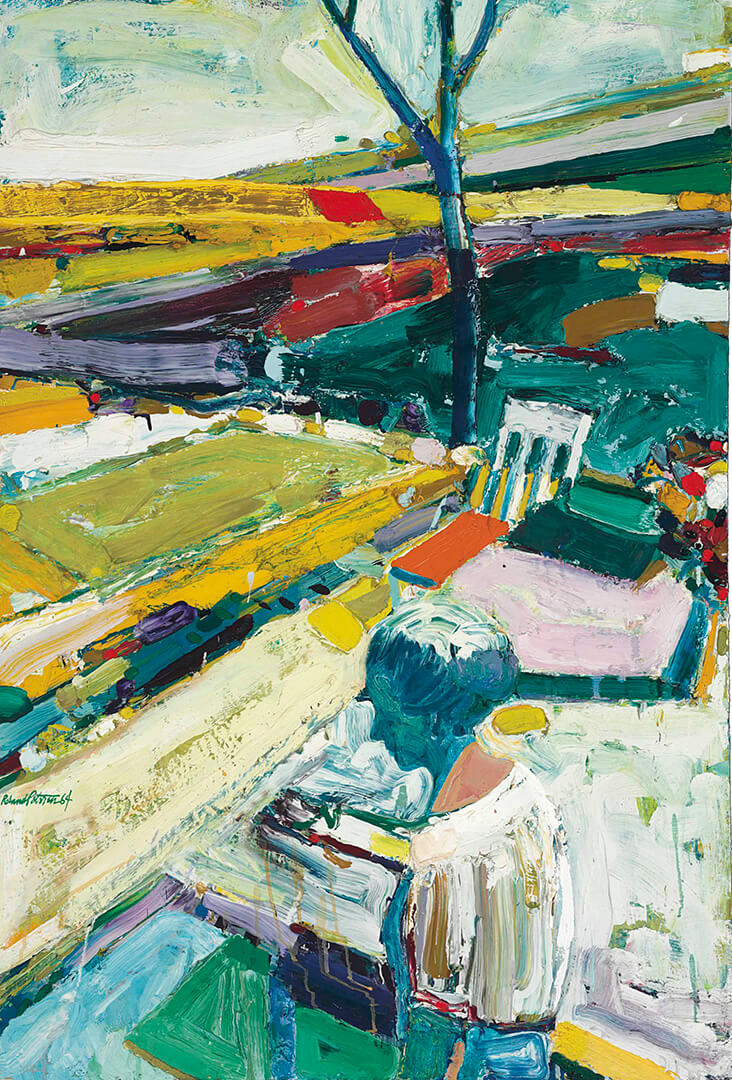 American painter Roland Petersen makes paintings that are streaked with angular slabs of sunlight, slotted together with the appealing playfulness of a tangram puzzle. A leading member of the Bay Area Figurative School in 1960s San Francisco, Petersen was one of a generation who rejected Abstract Expressionism for a return to figuration, combining all the messy glory of paint with the depiction of real people and places. The references to the real world in Petersen’s paintings came from San Francisco, with its sun-streaked, landscape of pale, iridescent colours like the soft green of WEEPING WILLOW.

Born in Endelave, Denmark in 1926, Petersen went on to train as a painter at the University of California at Berkeley and the California School of Fine Arts. In 1950 Petersen studied with the renowned Abstract Expressionist Hans Hoffman in Provincetown, who taught Petersen how to balance expressive passages of colour with ordered compositions. 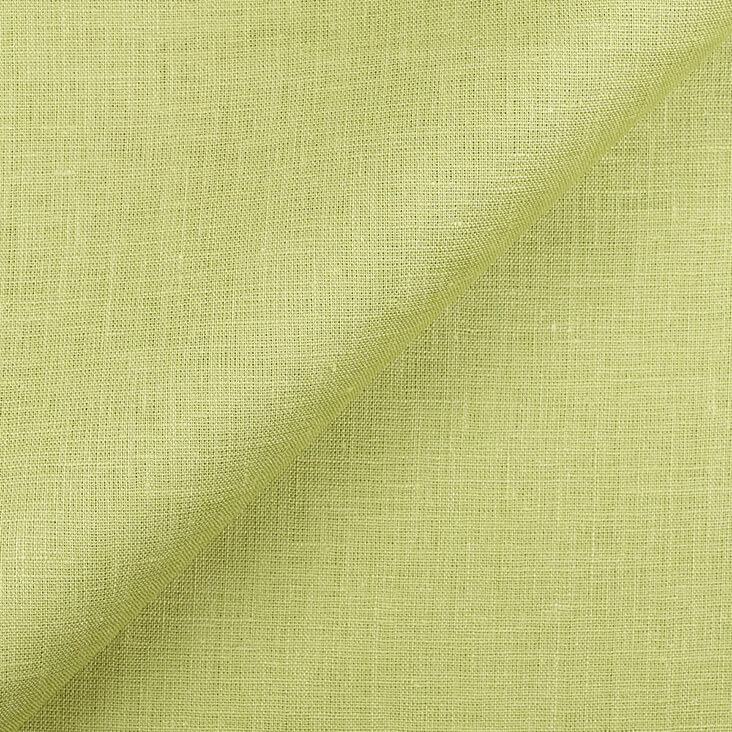 Throughout the 1950s and 1960s, Petersen combined his artistic practice with various teaching posts in Washington and California. It was during this time that Petersen mingled and became associated with a group of San Francisco based artists who were branching away from the fashion for Abstract Expressionism, towards a new language of expressive figuration. Alongside artists including David Park and Richard Diebenkorn, Petersen became a founding member of a new art movement that would become known as the Bay Area Figurative School. All artists associated with the group shared a sensibility for lively, painterly marks, ordered compositions, and the depiction of a distinctly Californian palette of pale, pastel colours that captured the crisp light of their landscape and interior views.

Petersen has moved through a variety of styles throughout his 50-year long career since, but he is particularly well-known for his angular, architectural landscapes, that combine the clean shadows of Edward Hopper with the visceral painterliness of Abstract Expressionism. But throughout this long and varied career, pale greens have populated Petersen’s art, lighting it up with the invigorating freshness of the Californian sunlight. 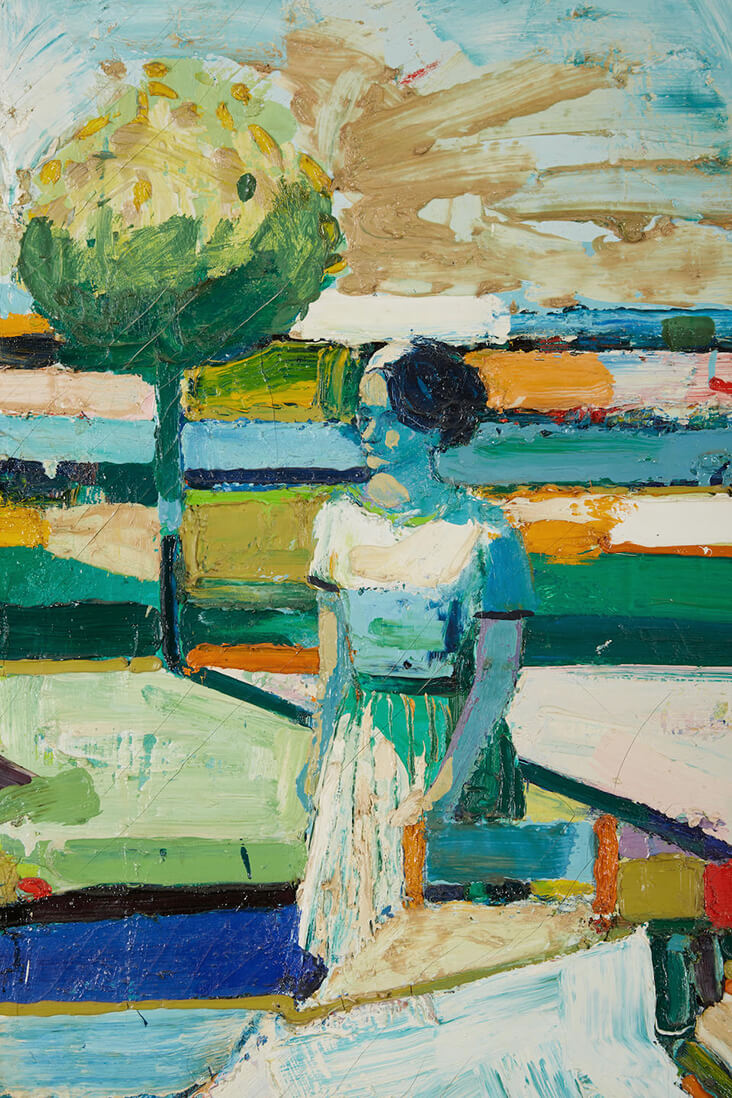 In the early career painting Autumn Figure, 1964, Petersen creates a dense, tightly packed patchwork of intense colour. The scene is almost entirely abstract on first viewing, but closer inspection reveals a ghostly blue female figure in the foreground, solemnly gazing down as a vast landscape opens out across the horizon beyond. In the distance, pastel shades of apple green catch the light, suggesting the warm, ambient glow of American sunlight. Made just a year later, Untitled, 1965 shares a similar design, with a pensive, lone female figure whose body is almost submerged into her surroundings. Around her, angular streaks of paint converge into a flat, geometric pattern, while the bristling circular treetop is a halo of glowing green light.

Although he is predominantly recognised as a painter, Petersen has experimented with a variety of other media, most notably printmaking. Pyramid of the Lake, 1973, is an example of the artist’s many etchings. Less structured and angular than his earlier paintings, this brooding, atmospheric landscape seems like a homage to Edvard Munch, with crystalline pale blue water and tinges of pale green that are scattered across rocks as the sun goes down, and the moon comes up. 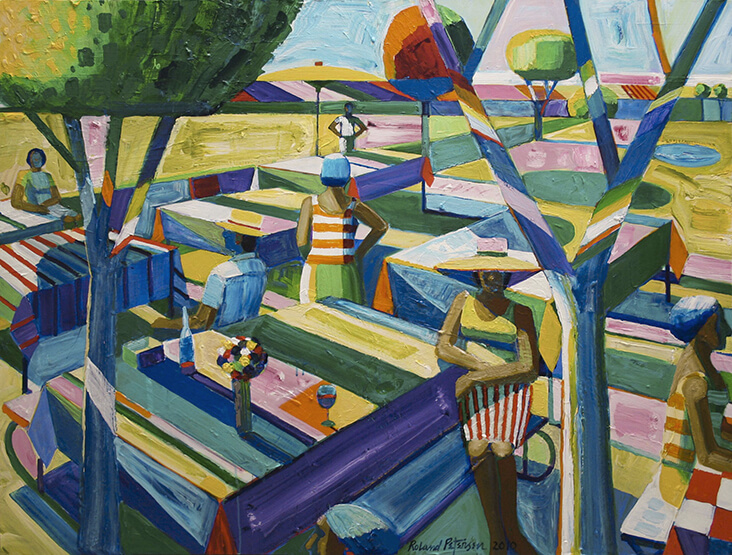 As his career has progressed, Petersen’s compositions have become increasingly complex and architectural, sometimes opening out into multi-layered, perspectival views. We see the beginning of this shift in the painting Untitled, 1988, which combines static, immobile figures with a complex arrangement of angular lines that pull us into and around the scene. As with his earlier art, pale greens are pivotal here, miming the last tinges of sunlit warmth as the sun goes down, casting cold blue shadows in its wake. In the later painting Girl in Striped Skirt, 2010, we see Petersen’s compositional complexity in all its glory, as we look down from above across an ordered arrangement of sunlit tables, while tranquil figures bask in the midsummer heat. Greens catch the light, sparkling with iridescence across the scene, and capturing the luminescence of a still summer’s day as the sun rages in the sky overhead.