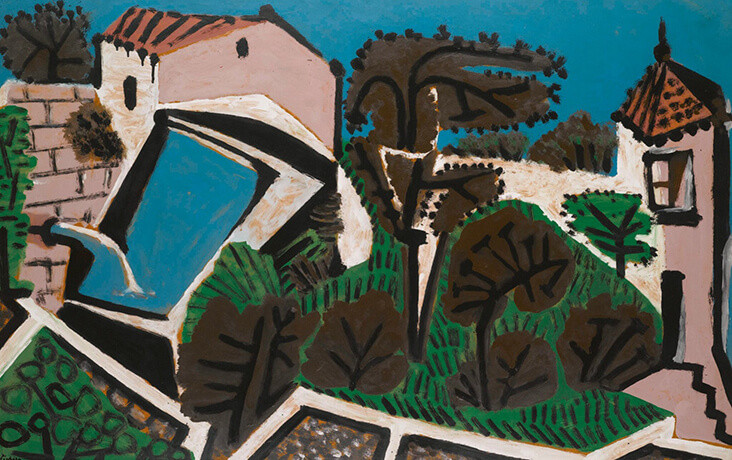 Dazzling shades of blue like CERULEAN linen were a hallmark feature of Pablo Picasso’s late art, colouring it with the fresh light of the Mediterranean Sea. In his later years Picasso settled in the South of France, and, much like his contemporary Henri Matisse, the vivid, intense colours he encountered there ignited his artworks with sparkling, joyful vitality. But there is another reason, perhaps, why Picasso’s late art is so forcefully bright; he knew, by now that his name would be cemented in history, and this breezy, effervescent confidence fizzes and sparkles through his late art, shaping its colours and forms. 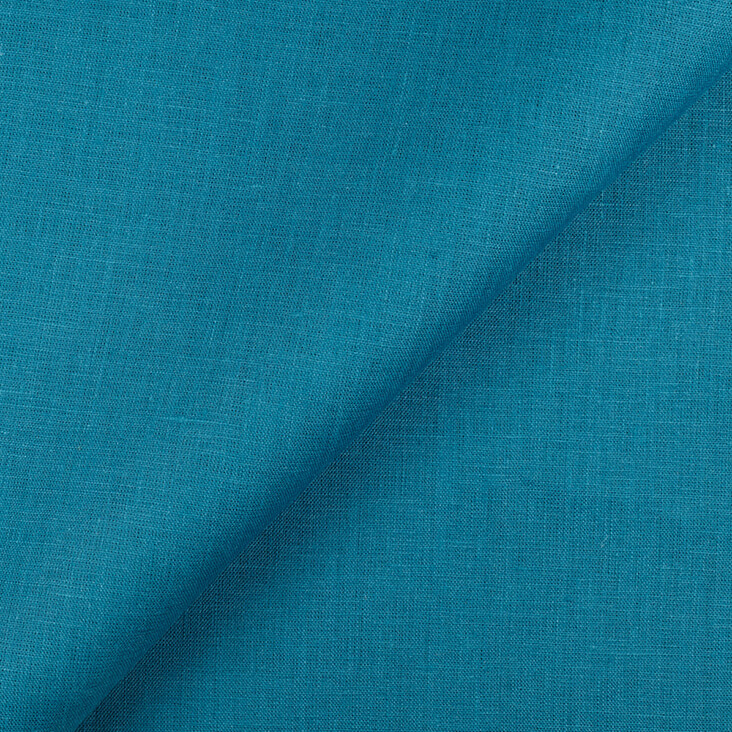 Born in Malaga, Spain in 1881, Picasso trained as a painter in Madrid and Barcelona, although it was in Paris as a young man that he truly made his name. Much has been written about Picasso’s early, so-called ‘Blue Period’ of the early 20th century, with its melancholic scenes of starvation, struggle and the fight for survival. Blues of all shades colour this early art, but they are predominantly dark and sombre, and their overall message is one of tragedy and grief. Fast forward 50 years and we see an entirely new approach to the colour blue; gone are the moody, sombre tones and in their place are flat, bold streaks of turquoise and aqua that seem to celebrate the successes of a life well lived.

In his early days in Paris, Picasso also pioneered a Cubist approach to art, breaking apart pictorial conventions of perspective and form in favour of a shattered, splintered world view. He went through a series of monumental life changes in the following decades, living through two world wars, loving and losing many friends and partners, and relocating many times over. But the Cubist way of seeing never really left him, and his late art is testament to this, with its angular shards, flattened forms and collage-like compositions. Le Resevoir, 1952 is one of a series of landscapes Picasso painted over several weeks in the early autumn of 1952. The atmospheric setting is near his South of France home, known as La Galloise, in the small town of Vallauris. In this painting scenery is reduced to a jumble of jagged, rocky and leafy forms, capturing the dry, rugged nature of the landscape. Intense aqua blue is the star feature, raging across the sky and spilling out into the resevoir in the near distance, carrying with it the blazing beauty of a clear, warm Mediterranean day. 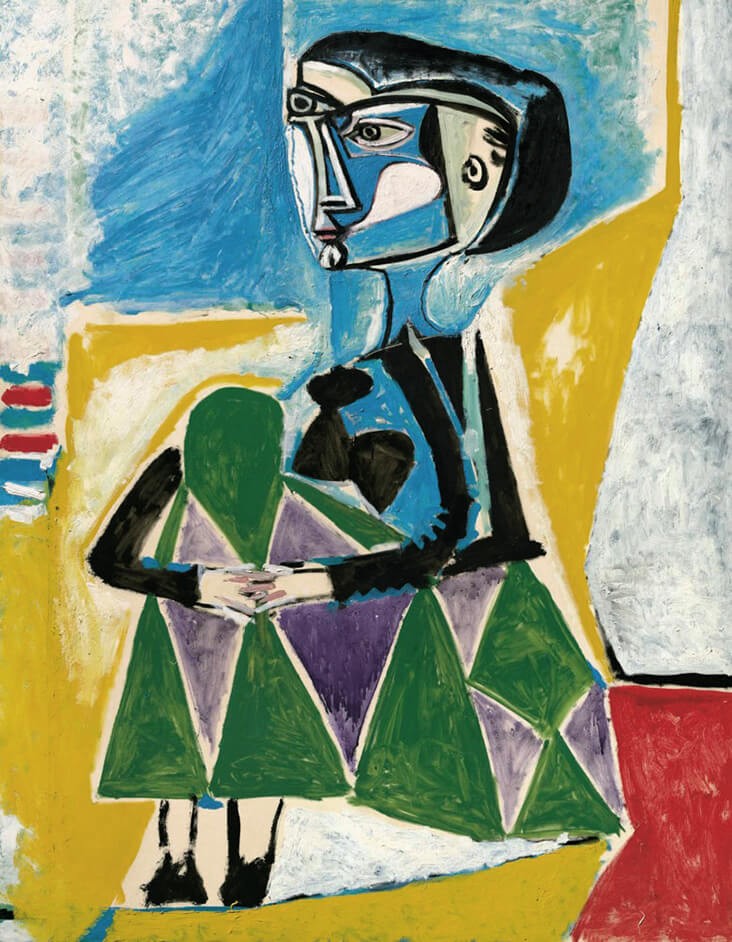 The same daring shade of blue is a defining feature of the painting Femme Accroupie (Jacqueline), 1954, a portrait of Picasso’s lover Jaqueline Roque, who he had met in 1952. She became his life partner for the remainder of his career, and Picasso seems to celebrate their passionate union with this vibrant and spirited canvas, so filled with optimism and life. He went on to paint her many times again, conveying his obsessive adoration of her as his partner and muse.

In the spring of 1954, Picasso met another young muse who fascinated him; the 19-year-old Sylvette David. She famously appeared in a series of Picasso’s paintings with her high, pulled back ponytail, long fringe and reserved, self-conscious manner. Portrait of Sylvette David in Green Chair, 1954 is one of a series of 31 paintings and drawings Picasso made of Sylvette in his typical angular, Cubist style. Though almost entirely abstract, Picasso captures the defining features of this young woman, with her long mane of hair and proud, delicate jawline. Colour is a driving force, with aqua blue shards of shadow that seem to fall across her face, contrasting with the apple green of the chair behind her. 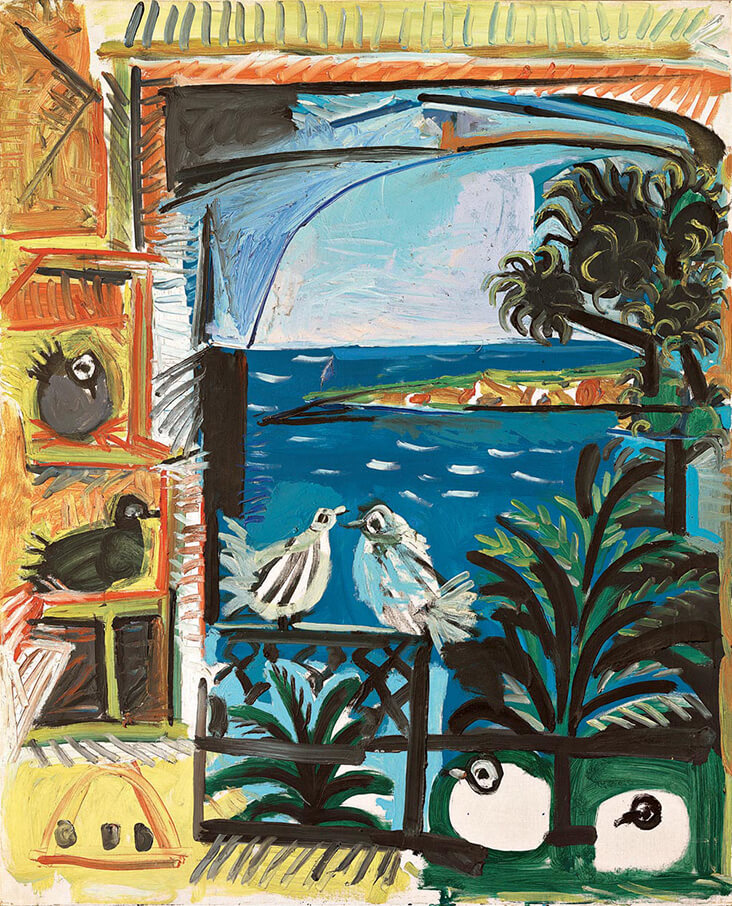 For the remainder of Picasso’s late career, he continued to paint with the same lively, optimistic colour schemes and bold, Cubist designs.  Les Pigeons, Cannes, 1957 merges an interior/exterior view, miming the designs of Picasso’s great contemporary Henri Matisse who had died just a few years before this work was painted. Dark turquoise is once again a trademark feature, expressing the stunningly picturesque, oceanic views of Cannes that dominated Picasso’s later years. It is no accident that this aqua blue ocean encircles two white doves, a recurring symbol of post-war peace in Picasso’s late art, and we are reminded of the security and tranquillity Picasso had now found with Jaqueline in the South of France, after enduring so many years of tumultuous change.

20th century Russian pioneer Natalia Goncharova had an astonishingly varied and prolific career, spanning painting, printmaking, costume, set design and more. Pulling together all these diverse ideas was a desire to celebrate her Russian heritage, and its place in an increasingly modern society. Russian fabrics were among her most favourite and cherished objects, particularly those…