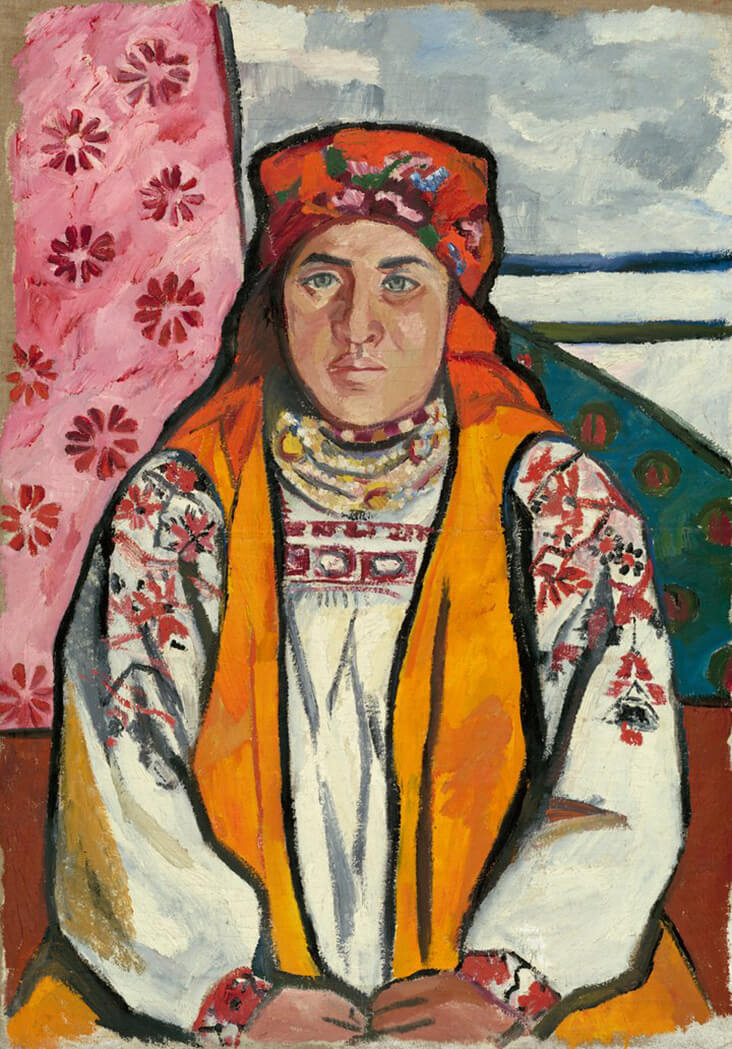 20th century Russian pioneer Natalia Goncharova had an astonishingly varied and prolific career, spanning painting, printmaking, costume, set design and more. Pulling together all these diverse ideas was a desire to celebrate her Russian heritage, and its place in an increasingly modern society. Russian fabrics were among her most favourite and cherished objects, particularly those that reminded her of her simple childhood in the Russian countryside, and her family’s textile business. Again and again, she would return to the intricacy of their patterns in search for ideas to propel her art forward in new and adventurous directions, while grounding it in a deeply personal visual language. 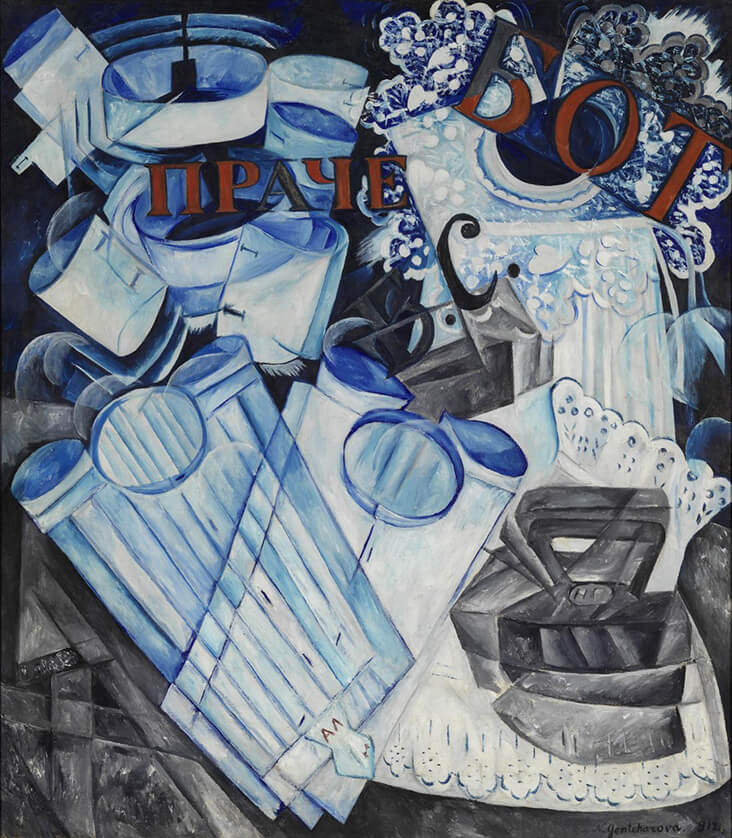 Goncharova was born in 1881 in Russia, and grew up on her grandmother’s family estate. Her family were descended from aristocracy, but they had fallen on hard times. They earned their living through textile production, and Goncharova saw every stage of fabric production, from sheep shearing to weaving, dyeing and decoration. Although her family later moved to Moscow, these early years in rural Russia had a marked impact on Goncharova, shaping the adult artist she would become.

Goncharova trained as a painter in the School of Painting, Sculpture and Architecture in Moscow. In her early years as an artist Goncharova would often return to her family estate, where she would seek out inspiration from the traditional styles of Russian folk art and fabrics, particularly those with elements of floral embroidery. Paintings such as Peasant Woman from Tula Province, 1910 demonstrate her deep fascination with the rich colours and patterns of Russian traditions that were kept alive through the rural communities that had settled on her family’s estate. 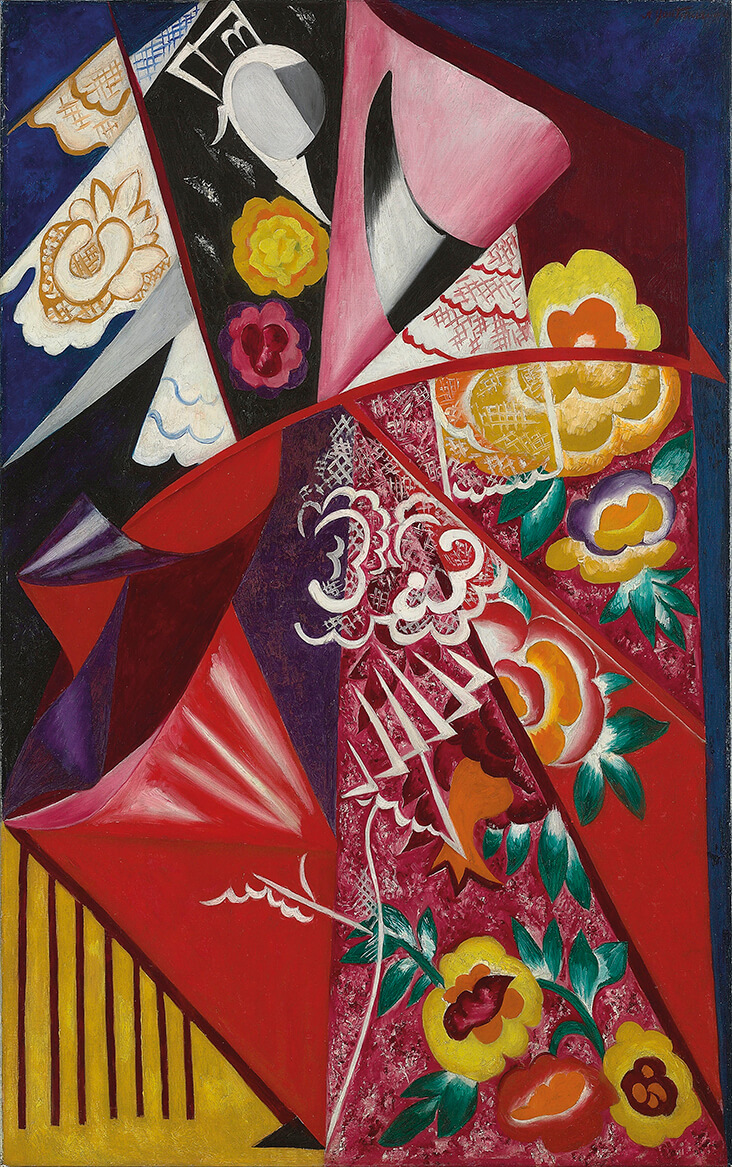 Throughout the following years Goncharova became actively involved with a radical band of fellow artists, who embraced the rising styles of European art such as Cubism and Futurism. Her subject matter was incredibly varied, including still life, portraiture, landscapes and allegorical stories. Even so, patterned fabrics still crept into many of her most radical artworks. In the abstract, Cubist-style painting Linen, 1913, Goncharova pays homage to the crisp freshness of white linen, merging fragmented pieces of her own Russian, traditionally embroidered lace blouses and aprons with her husband, the painter Michel Larionov’s shirts, collars and cuffs.

The experimental way Goncharova presented herself also demonstrated the artist’s love affair with fabric and clothing – she often wore men’s shirts and painted her face and body to attract attention on the streets of Moscow. It was this exhibitionist streak that first caught the attention of the ballet impresario Sergei Diaghilev, who observed of Goncharova: ‘It was she who made the shirt dress fashionable – black and white, blue and ginger’. 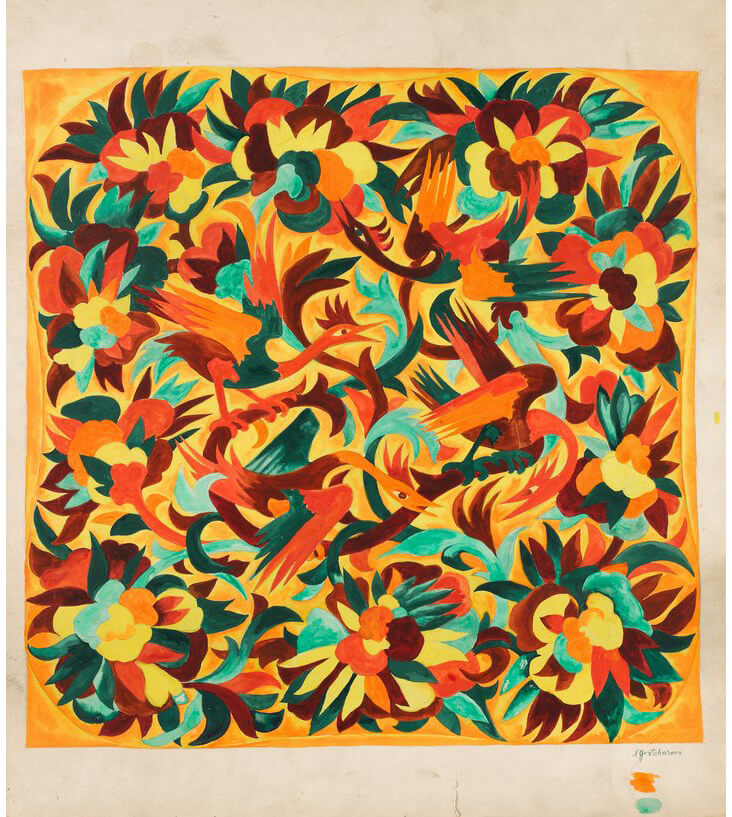 In 1913 Goncharova was hired to work with the Moscow-based fashion designer Nadezhda Lamanova. Among her various roles here, Goncharova worked on embroidery patterns, ornamental needlework and textile design, creating striking and immediately arresting patterns with the same dramatic impact as her works of art. Later, in Paris, Goncharova collaborated with Marie Cuttoli’s design house Myrbor, designing a series of floral motifs influenced by the folk art and peasant costumes of her childhood.

In 1914 Goncharova collaborated with Diaghilev on various Ballets Russes productions and their partnership was one of the highlights of her career. Again, she looked back to the rich embroidered textiles of rural Russia and these became a vital and individual ingredient that made her costumes stand out from the crowd. From this period onwards Goncharova’s aesthetic was often inspired by the colourful vibrancy of Spanish clothing, which reminded her of ornate Russian traditions. Throughout her later years Goncharova remained endlessly prolific, working across a huge variety of disciplines, including costume design, fashion, painting and illustration, demonstrating just how indivisible she saw the practices of textile design, clothing and art.