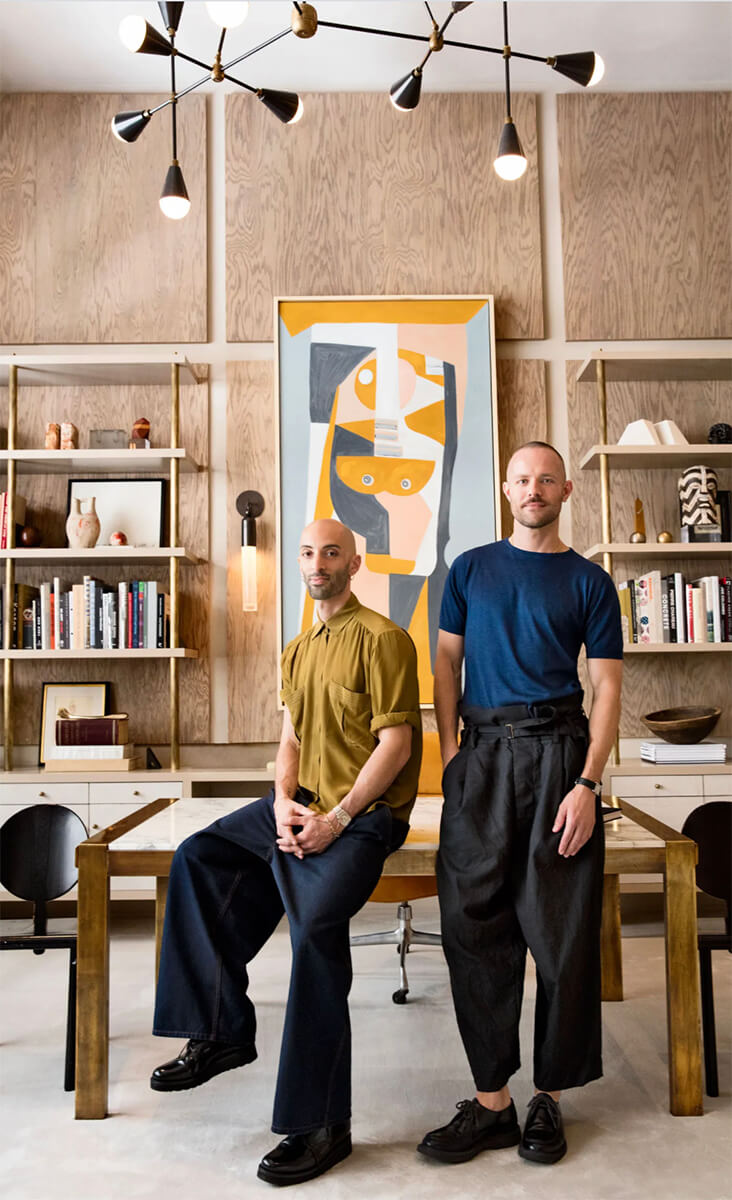 Gabriel Hendifar and Jeremy Anderson are the ingenious power couple behind famed lighting brand Apparatus, which has been steadily growing in stature over the last ten years. With a 40 strong team and a busy Manhattan workshop, Apparatus have developed a cult following for their eccentric take on lighting, which incorporates subversive materials including suede, alabaster, horse hair, brass and porcelain. While this might sound a little wacky, there is a surprisingly streamlined elegance to their designs, and it is this careful balance of opposites that defines the success of the Apparatus brand. 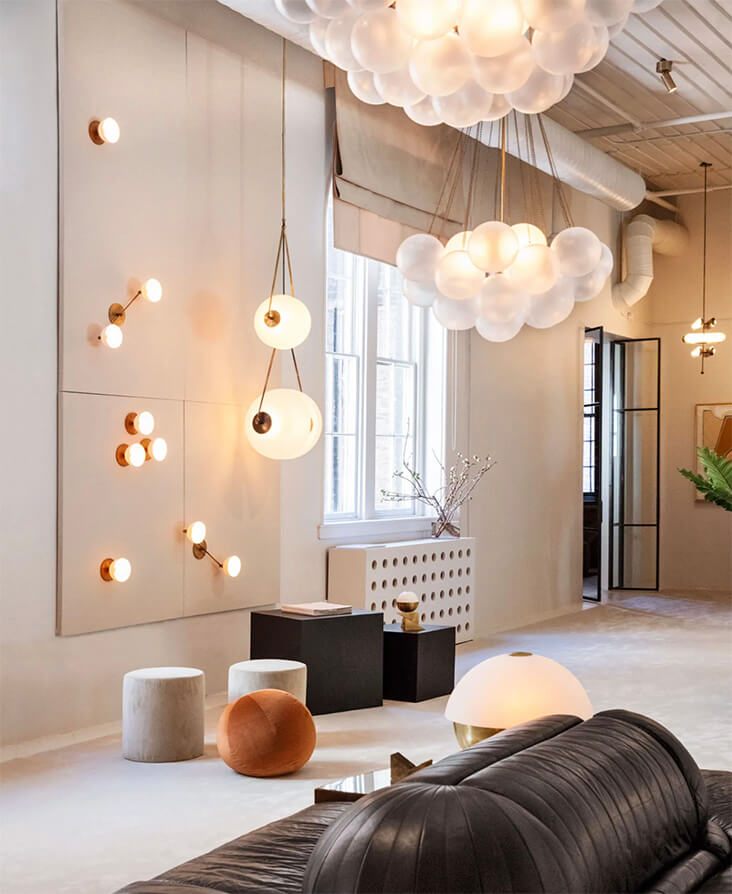 An arrangement of Apparatus lighting (including two signature Cloud pendants) within their Manhattan showroom. Photo: Courtesy of Apparatus Studio

Gabriel and Jeremy first met while living in Los Angeles; Gabriel was part of fashion designer Raquel Allegra’s design team while Jeremy was working in media relations and making his own pottery. When they moved in together six months later, the style of their home was at the forefront of both their minds. Searching for affordable, yet stylish lighting for their interior space was a struggle, and they quickly spotted a gap in the market, as Gabriel explains, “part of looking for lighting became, in all honesty, not being able to afford what we liked, or not liking what was out there. So, we decided to make our own. I remember saying, ‘I think there’s something we can do, that doesn’t exist.’”

The first design they would create together was the Twig light, a sophisticated brass fixture with slim bending elbows to allow adjustable light angles. They then moved on to develop the Cloud chandelier, a huge cluster of suspended orbs made in frosted glass to softly diffuse light, much like sunlight being cast through thin cloud. At this stage Gabriel and Jeremy still hadn’t given up their day jobs, but this side hustle was soon to become their main gig when a friend with a lighting store in Los Angeles offered to promote and sell their work. Within the next 18 months, a stream of orders and press interest followed and just a few years later they had relocated to New York, establishing a permanent workshop space in Manhattan. Here they were able to finesse their unique aesthetic, blending simple geometry with tactile materials and subtle irregularities. 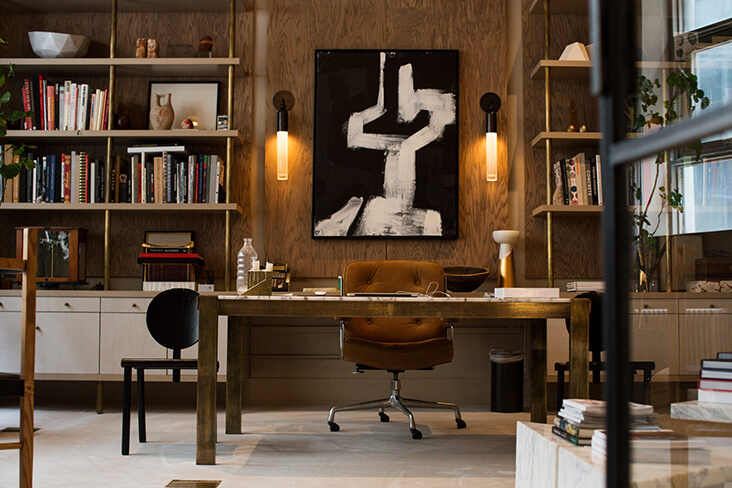 In Gabriel Hendifar and Jeremy Anderson’s studio are contemporary art pieces, from wall sculptures by Robert Moreland to paintings by Mattea Perrotta.

In the early years of their business, Gabriel focussed predominantly on design, drawing on his background in fashion, while Jeremy hand-built the designs, bringing in practical skills and a precise eye for detail. Since the business has extensively grown, design production has been outsourced to a wider team who are established in a cavernous Manhattan studio, leaving both designers to focus on concept work and team management. This means working closely together, as Gabriel explains, “I develop the concepts, but there’s always a point in that process where it is critical to have Jeremy’s feedback. He’s the eagle-eye editor and able to immediately find the weak link, which always results in the object becoming better.” 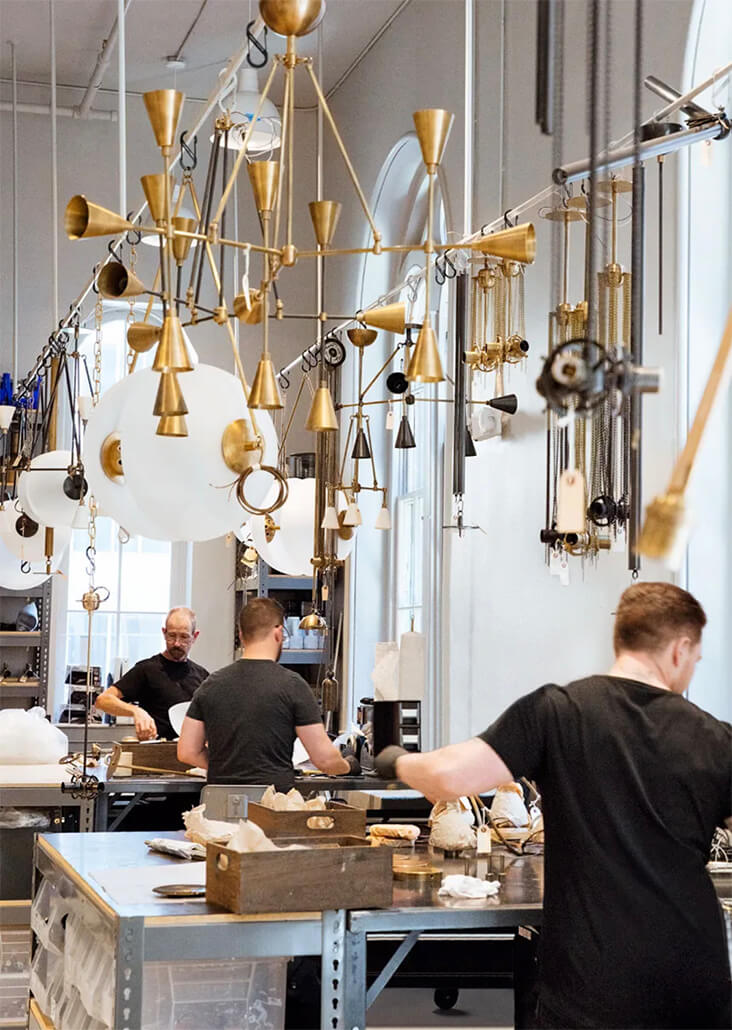 Like most couples who choose to work together, their partnership is not without conflict, and they are ready to admit how impossible it is to truly switch off. “I’m barely rubbing my eyes and waking up in the morning when he’ll be showing me all these things he’s already drawn,” says Jeremy. But it is their relentless drive to create and make something meaningful in the world with heart, body and soul that unites this power couple. Conflict, on the other hand seems to come from the small stuff beyond work, as Gabriel says, “The fights we get into aren’t about differences in ideas as to how we should do things. They’re about silly little behavioural patterns.” “They’re couple fights!” agrees Jeremy. 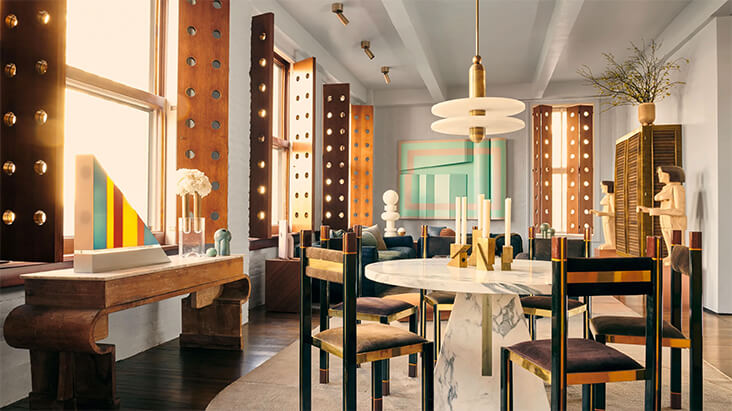 If anything demonstrates the incredible power of this duo, it is the home they share in a New York city loft. Much like Charles and Ray Eames before them, this intimate space speaks volumes about the people who inhabit it, blending Gabriel’s eccentricity with Jeremy’s precise and exacting eye. Curious half-formed prototypes jostle beside pristine lighting fixtures and quirky architectural details; this state of half-finished completion aptly reflects Gabriel and Jeremy’s endlessly prolific lives. Gabriel says, “As much as this loft functions as a creative laboratory, it’s also our home. We set a high bar for the things we live with and the things we put out into the world.”

French artist Raoul Dufy is one of the most celebrated artists of the 20th century, known for his brilliantly colourful, spirited artworks that convey a world of eternal optimism. Although he is primarily remembered today as a painter, there is another, less publicised side to Dufy – that of a pioneering textile designer. He produced…

Curated By You: Sara Borgeson Makes The Fringe Dress In Linen

Tell us a bit about yourself and what you do.   My name is Sara and I live in Northern California with my husband and 3 young boys. All I ever really wanted was to raise a family, and I married my love when I was 19 years old and began doing just that! I’ve dabbled…

Russia, as we now know it, has a long and complex history of embroidery, one going back many hundreds of years. From the gold thread vestments of medieval clergy to the colourful and intricately illustrated clothing of indigenous cultures, Russian embroidery has much to tell us about the nation through the centuries. Far more than…