The Patterns and Prints of Paris: Edouard Vuillard’s Fabric 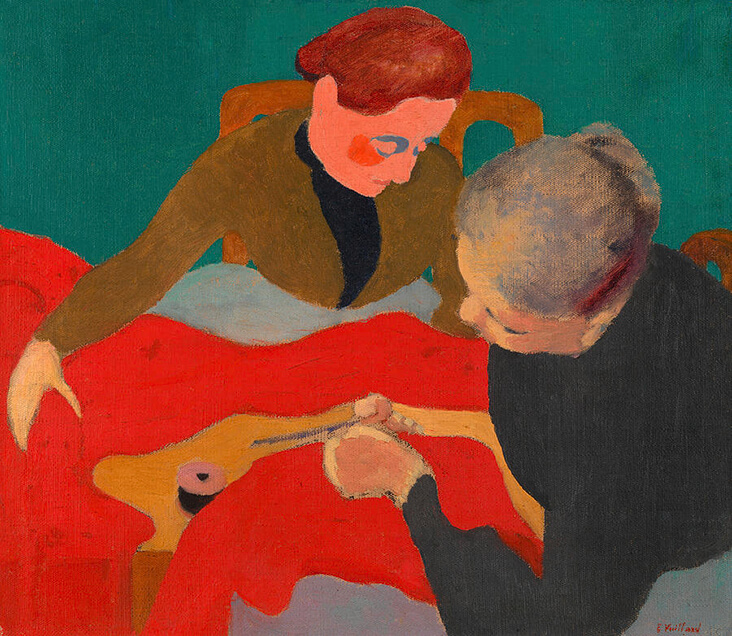 Bold, brilliant fabric was a lifeline for French Intimiste painter Edouard Vuillard, defining the aesthetic and conceptual meaning of his art. Vuillard’s mother and sister were both dress and corset makers and he grew up surrounded by a cacophony of printed textiles, all scattered haphazardly across their 19th century Parisian apartment. This environment shaped the artist Vuillard would become – his intimate paintings are an ode to the colourful magic of printed textiles, spread chaotically throughout their creative home, or buzzing on the streets of modern Paris.

Vuillard lived his entire life in Paris, where he shared a modest apartment with his mother until her death when he was 60 years old. His father died in 1884 when Vuillard was 16 years old and from this period on Vuillard’s mother became the sole breadwinner, earning her living by working tirelessly as a seamstress, dress and corset maker from home. She often appeared in Vuillard’s paintings throughout his career as a formidable woman dressed entirely in black, dominating the interior space around her with a solid and unbreakable permanence. Vuillard’s sister Marie later joined her mother in the family business, and Vuillard often painted both the women of his life at work in his home, observing their quiet, private word of creative endeavour with a beady eyed fascination that came to typify the Intimiste painting style. 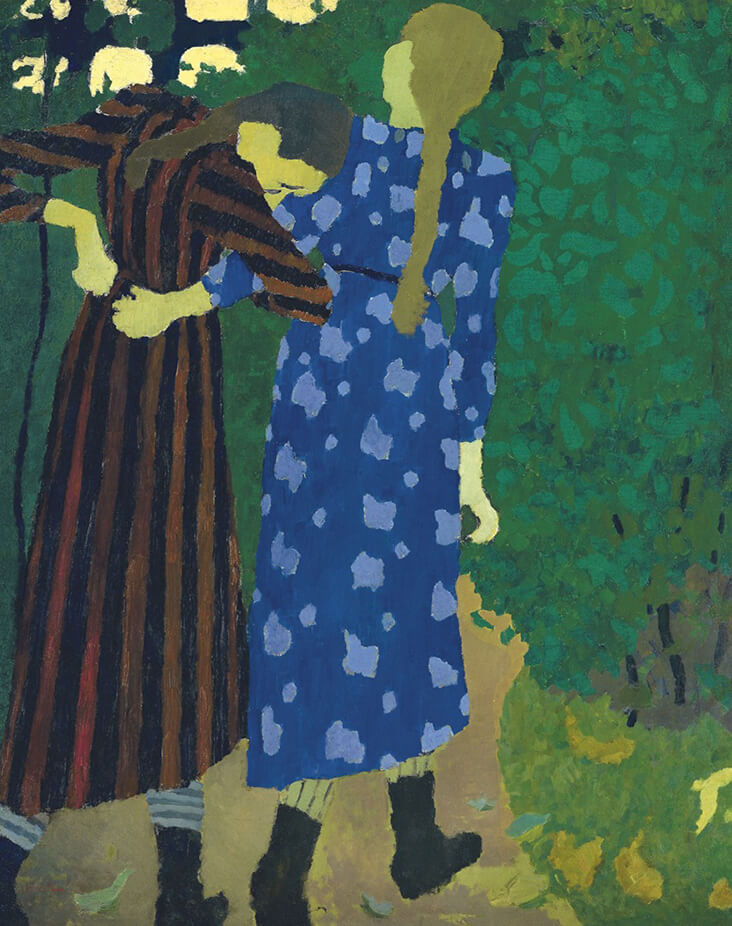 In the ground-breaking painting The Dressmakers, 1890, Vuillard paints his mother and sister working together on a hand-made, corseted dress. Marie grips a ream of intense red dress fabric which Madame Vuillard carefully cuts into with a pair of scissors, while both women are intensely absorbed in their shared activity. The painting’s daring exploration of flat, decorative colour as inspired by Oriental art was a radical breakthrough for the era, paving the way for the abstract art that followed. Yet it also demonstrated Vuillard’s early fascination with the creative and entrepreneurial women that dominated his home, and the fabric that bound them together.

In the slightly later Interior with Mother and Sister of the Artist, 1891, Vuillard once again paints the two dominant women in his life, but he sets up a curious and unsettling balance between them. Vuillard’s mother is a flat field of black, as permanent and immobile as a statue, while Vuillard’s sister Marie cowers to her left, wearing a checked dress that almost merges with the wallpaper behind it. The painting reveals Vuillard’s growing fascination with the interplay of clashing, closely toned prints, but he also explores the narrative potential of pattern, conveying his sister’s uneasy status beside her powerful matriarch mother, as if disappearing into her surroundings. 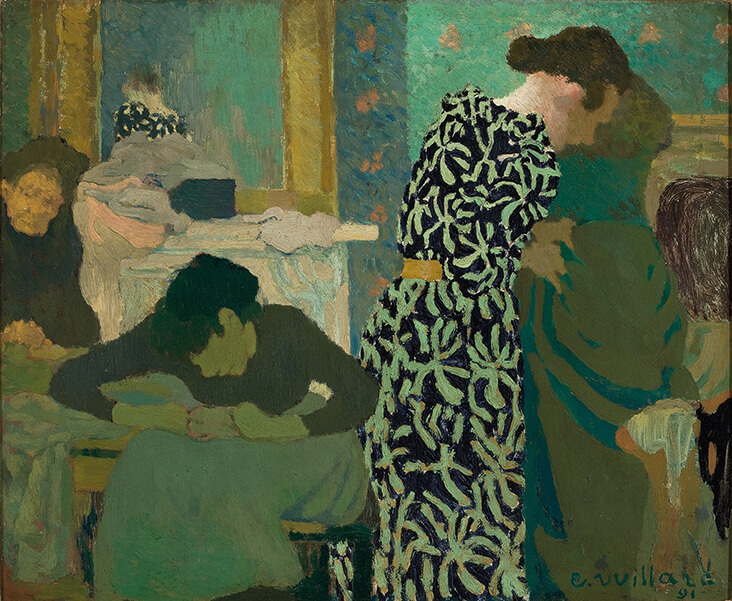 While Vuillard was still finding his voice as a young painter in Paris, his mother and sister’s all-consuming business kept him financially stable, so it’s easy to see why their work filtered through into his art. Marie and Madame Vuillard made clothing for a wide variety of Parisian clients and they would have sourced their fabrics from Parisian stores which housed the latest trends in textile design, including screen-printed Arts and Crafts designs shipped over from Liberty of London. The richly adorned textures in so many of Vuillard’s paintings demonstrate just how fascinated he was by their extensive collection of fabrics. This domestic environment also inspired Vuillard to look at fabrics beyond his home in the streets and cafes of Paris, where women were defined by the dazzling, striking prints adorning their bodies. In striking paintings such as Walking Girls, 1891, The Flowered Dress, 1891 and The Striped Blouse, 1891, the patterns of clothing become the very life and expression of the women wearing it, whose expressionless faces are turned away in muted silence.

Vuillard also imbued the tactile quality of textiles into the style of his paintings, with stroked, striped and dappled brushstrokes that mime the different weaves of fabric within a single image. The masterwork painting that is The Album, 1895 demonstrates this quality, with broad, loose streaks describing silky surfaces, while scumbled areas suggest indulgent ruffles, and tiny flickers of movement become intricate floral patterns. Here the women’s faces are smooth, silent and serene, while fabric takes centre stage, revealing just how vital it had become to Vuillard’s practice.

French artist Raoul Dufy is one of the most celebrated artists of the 20th century, known for his brilliantly colourful, spirited artworks that convey a world of eternal optimism. Although he is primarily remembered today as a painter, there is another, less publicised side to Dufy – that of a pioneering textile designer. He produced…

Curated By You: Sara Borgeson Makes The Fringe Dress In Linen

Tell us a bit about yourself and what you do.   My name is Sara and I live in Northern California with my husband and 3 young boys. All I ever really wanted was to raise a family, and I married my love when I was 19 years old and began doing just that! I’ve dabbled…

Russia, as we now know it, has a long and complex history of embroidery, one going back many hundreds of years. From the gold thread vestments of medieval clergy to the colourful and intricately illustrated clothing of indigenous cultures, Russian embroidery has much to tell us about the nation through the centuries. Far more than…