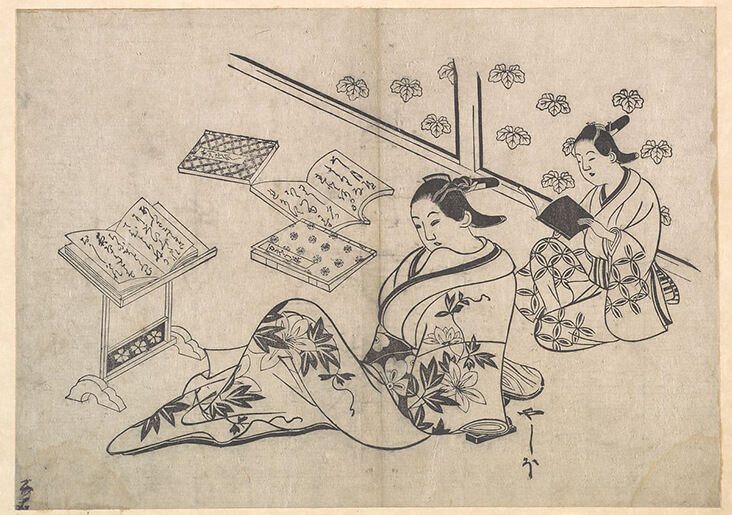 Japanese ukiyo-e art has a long and incredibly varied history, and a closely knit relationship with fabric. In this instalment of our series on ukiyo-e art, let’s start at the very beginning with the movement’s founder, and delve into the ways fabric informed his practice as a painter and printmaker. Ukiyo-e is often traced back to one man from the 17th century: Hishikawa Moronobu, known today as the “Father of Ukiyo-e.” Throughout his career, Hishigawa made pioneering illustrations of real people from Edo’s busy theatre district, and it is this area of Edo that became known as ukiyo-e, or the ‘floating world.’ Hishigawa was particularly interested in portraying beautiful women such as dancers and courtesans, who he adorned in elaborate clothing to lend them a mysterious theatricality. His influence was widespread and lasted for centuries, particularly after founding the Hishigawa School, his educational workshop.

Hishikawa had a particularly close connection to Japanese fabric because his family owned a textile business, which focussed on decorating fabrics with embroideries and impressed metal foils. In his youth Hishikawa’s family taught him their textile trade, sharing skills in intricate detail and precision that would be invaluable in his later career as an artist. The tradition for artists of the time was to train under a master in his workshop, or ‘school’, and Hishigawa studied with the traditional schools of Kano and Tosa before founding his own: the Hishigawa School. 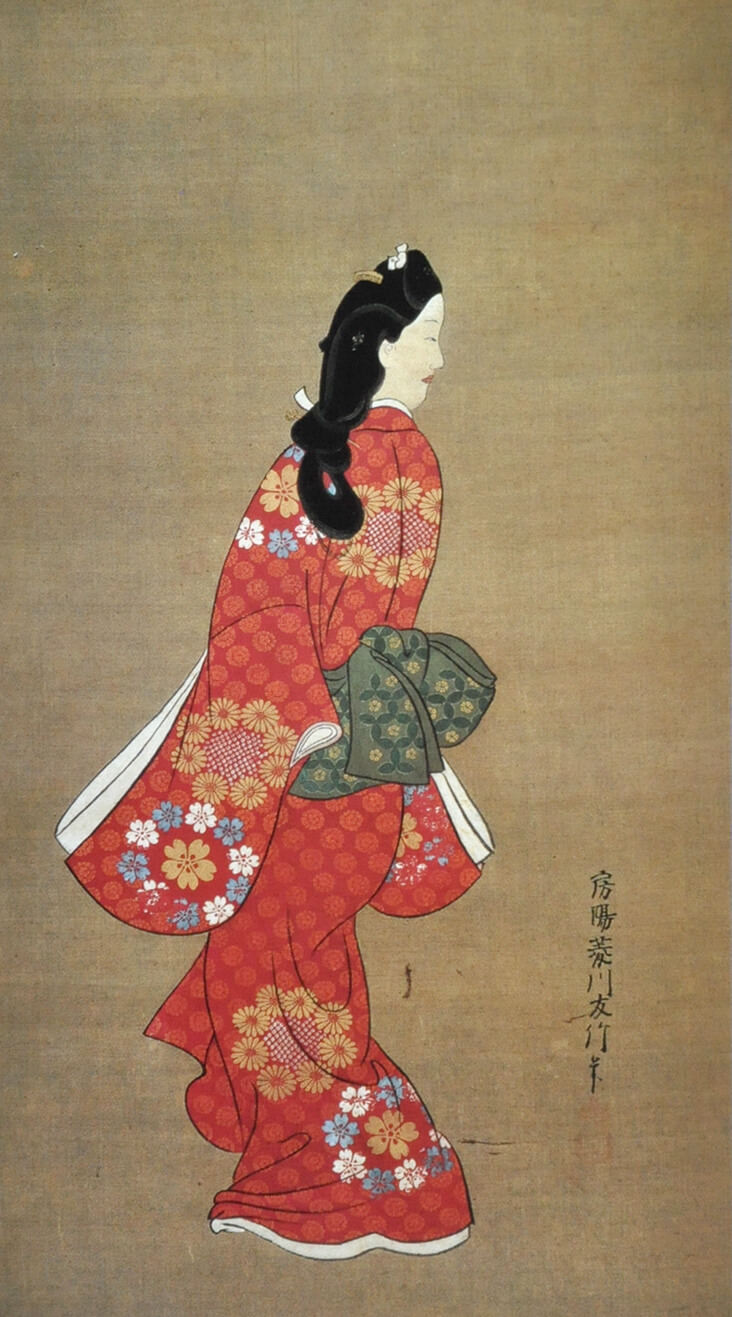 Hishigawa’s earliest independent art took the form of book illustrations, documenting an array of subjects with a whimsical, playful and spontaneous quality, including street scenes, folklore, beautiful women and historical events; they are recognised today as the earliest examples of ukiyo-e. Hishigawa later developed these playful illustrations into distinctive, one-off works of art, hand painted onto scrolls or silks, many of which illustrated beautiful women or courtesans drenched in swathes of luxurious fabric. One of his most famous paintings is the immediately striking Beauty Looking Back from the 17th century, painted onto on silk with bold, flat colours and strong outlines. The defining feature of this print is her eye-catching red robe, adorned with stunning embroidered flowers that seem to bloom with the intensity of a Japanese summer, set against the rich earthy green of her belt.

In Hishigawa’s Dancer, which now belongs to New York’s Metropolitan Museum collection, clothing is the dominant feature, conveying the sensuous movement of the dancer’s body as she twists and turns through space, bunching her voluminous robe into folds around her as she moves. Hishigawa masterfully combines bold areas of flat black with circular patterns that are scattered over her body like falling leaves, while carefully placed slim white lines suggest the soft ripples and creases of her clothing. 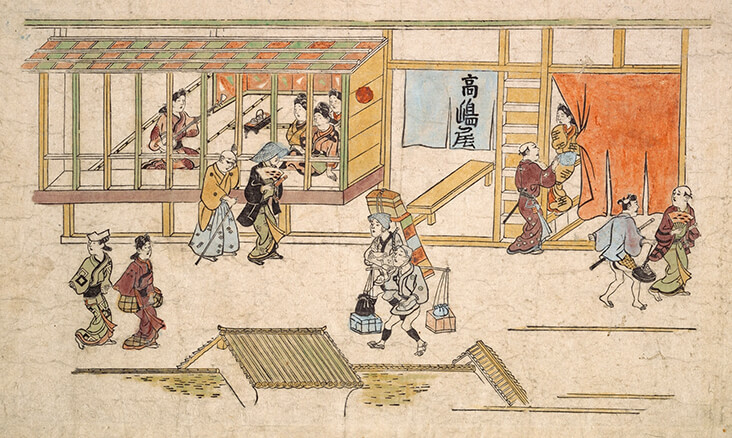 Throughout his mature period, Hishigawa was instrumental in introducing woodblock printing to Edo’s artistic culture, recognising that it allowed high-quality artworks to be produced in multiples for a fraction of the cost. His prints were generally made in black and white, due to the limitations of the medium at the time, but sometimes they were tinted with elements of hand-painted colour. Working predominantly in monochrome meant Hishigawa had to rely on the creative possibilities of line; the sensuous Two Lovers, 1675-80, demonstrates his skilful application of contour, combining angular architectural lines in the background with the flowing softness of foreground fabric and its carefully detailed, ornate floral patterning.

The Hishigawa School was profoundly influential across Japanese society, and many of the artists who trained here became important contributors to early ukiyo-e. Hishigawa Morofusa demonstrates the influence of his elder in many of his prints and paintings, such as the simple yet emotionally powerful woodblock print Lovers, from the early 18th century, which conveys the sinuous, organic lines of patterned Oriental silks as they melt onto the bodies beneath them. Hishikawa Morohira was also a leading member of early ukiyo-e from the Hishigawa School, and his prints explore the same poetic, lyrical qualities as his contemporaries. Autumn in the Yoshiwara; Cherry Blossom Viewing Party, 1688–1704 follows in the footsteps of his forefather, illustrating a complex, busy street scene, filled with the fleeting colours and patterns of clothing as they flutter like birds through the bustle of daily life. Torii Kiyonobu also trained under Hishigawa, and it was he and his father that would make progressive advancements in ukiyo-e art for a new era.