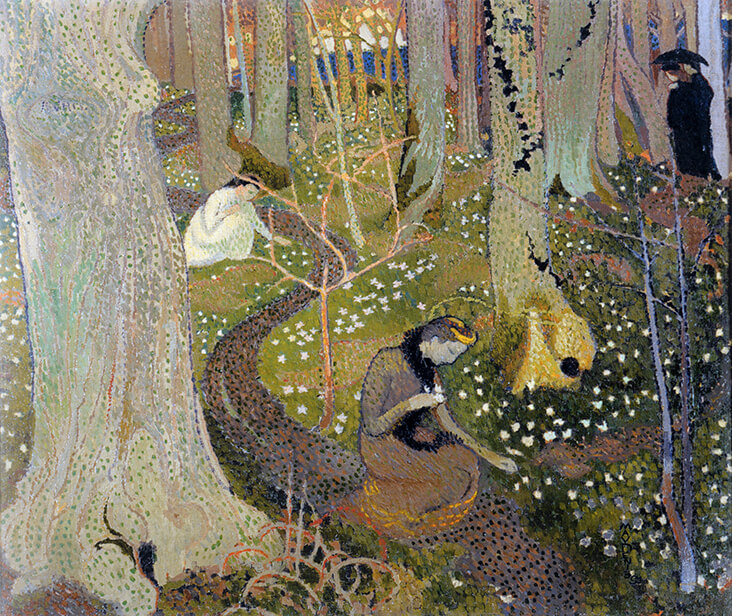 Earthy, intense shades of green like that of MOSS Linen fill Maurice Denis’s intimate art, investing it with a quietly hypnotising magic. Denis was a leader in the avant-garde artist circle Les Nabis alongside Edouard Vuillard, Paul Serusier and Pierre Bonnard; together they pioneered an avant-garde approach to painting that moved away from naturalism towards the expression of deeply felt inner emotions. Even when he adopted a neoclassical style in his later career, moody, intense colour was still vital in Denis’s oeuvre, allowing him to explore the dark, shadowy recesses of his mind with an entrancing theatricality. “Art is no longer a purely visual experience,” he observed, “it is a work of our intellect triggered by nature.” 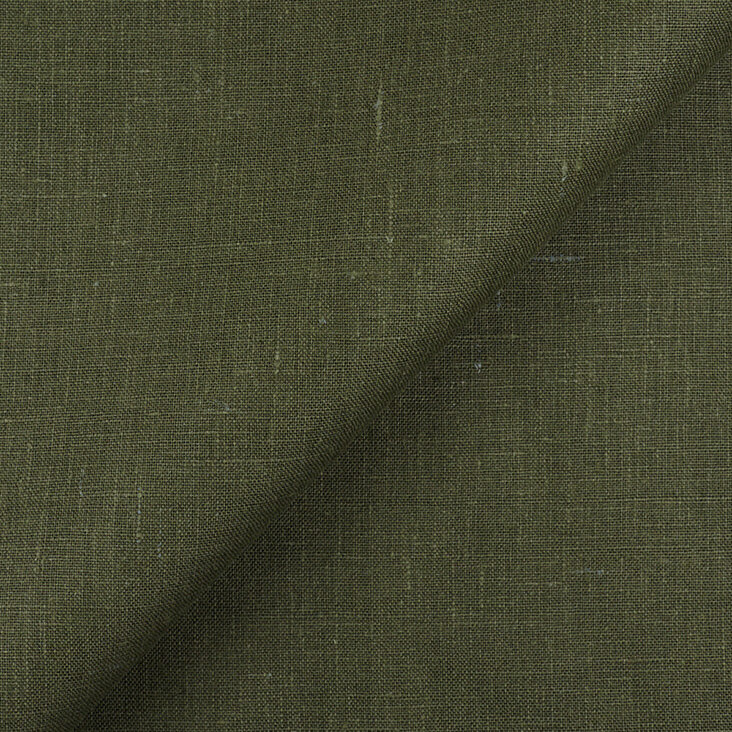 Denis was born in the small coastal area of Granville, Normandy in 1870, but they later relocated to the suburbs of Paris where Denis was raised. As a child Denis demonstrated an early passion for art, admiring the religious work of Fra Angelico and Raphael, with its vivid colours and symbolic mysteries. Denis trained as a painter at the Academie Julian, Paris, where he first met Pierre Bonnard, Paul Serusier and Édouard Vuillard, who would become lifelong friends. Together they were greatly inspired by Symbolist art, along with Japanese woodblock prints and the overflowing romanticism of the Pre-Raphaelites. Their group, Les Nabis, took its name from the Hebrew word n’vi’ím, meaning “the prophets,” emphasising the dreamy, otherworldly quality of their art. April, 1892 demonstrates Denis’s early Les Nabis style, with flat areas of decorative pattern and shimmering brushstrokes that weave rich shades of dark green into the foreground, suggesting the dampness of the forest floor. 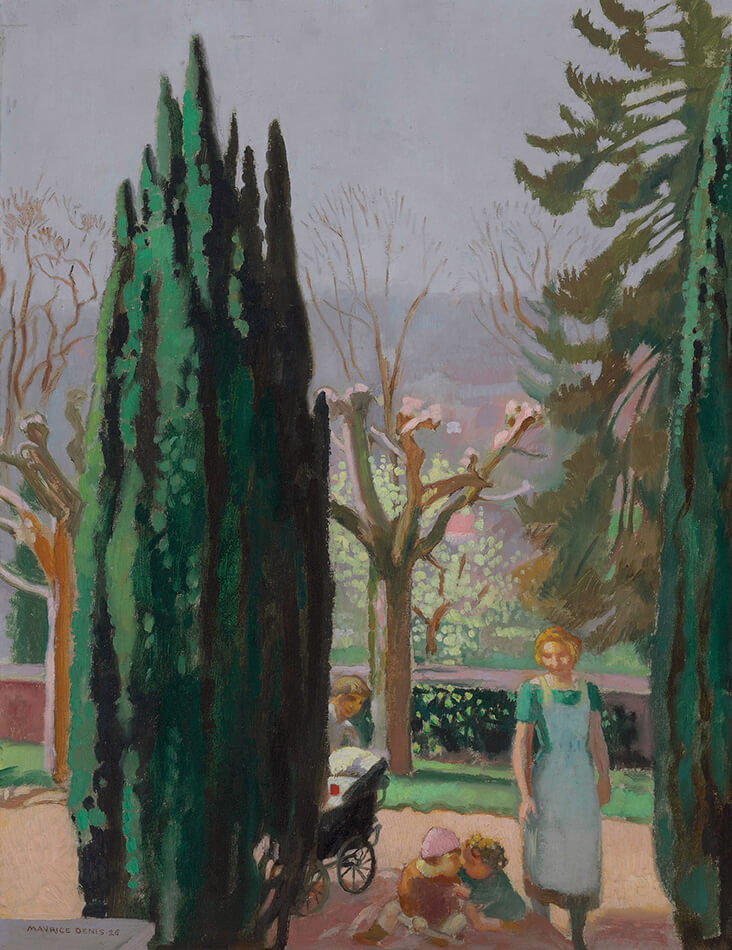 Denis’s art of the 1890s often focussed on intimate domestic scenes with an atmosphere of suspended tension, invoked through sombre, diffused light and figures caught mid-scene. La Cuisiniere, 1893 typifies his art of the era, illustrating a quiet interior which two women passively drift through in a dream-like state. The woman in the foreground was Denis’s new wife and muse, the musician and devout Christian Marthe Meunier, whose shadowy face is offset against a passage of vivid, flat pattern, while behind her another character is adorned in a deep green gown that adds layers of drama to the scene.

In the later 1890s Denis became increasingly preoccupied with making decorative art in an Art Nouveau and neoclassical style, producing a series of objects and commissions including woodblock book illustrations, decorated fans, tapestries, stained-glass windows, posters and painted murals. The painting La Legende De Saint Hubert, 1897 is part of a series of seven mural-like artworks made as a private commission for Baron Cochin. The series follows the life cycle of a woman, from youth to betrothal and motherhood, set in amongst a paradisiacal garden full of swirling, ominous plants, religious figures and majestic angels. In this image dark green punctuates the space with an intense, theatrical drama that bristles through the foreboding forest as if drawing us into the deep unknown. 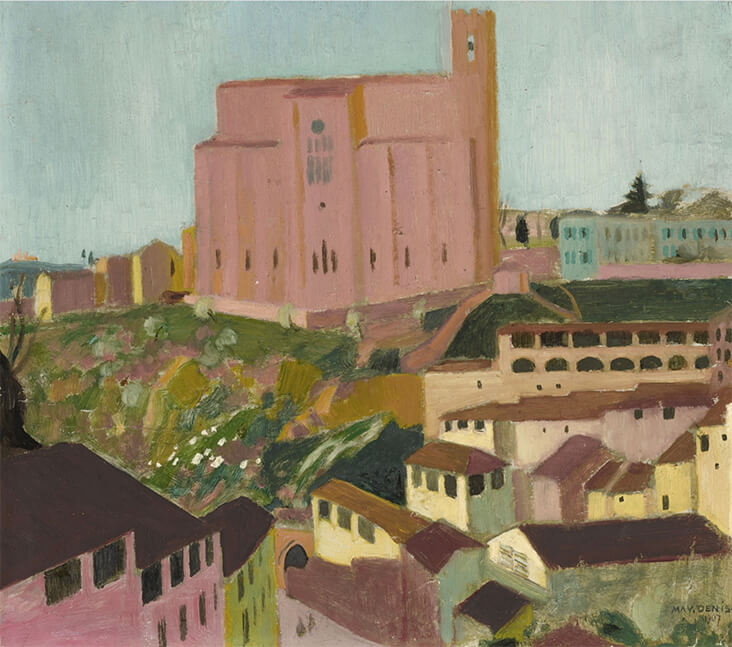 Following a trip to Rome in 1908 Denis introduced spiritual elements into his art, documenting places and characters of particular religious significance. San Domenico de Siena (Tanners’ Quarter), 1908 illustrates the well-known church in Siena as a towering pink emblem, grounded in fertile areas of lush green undergrowth. Denis often returned to painting quiet, intimate domestic scenes in his later years, sometimes illustrating his own family, as seen in the tranquil Enfants sur la terrasse, 1926. Here the artist’s young children play contentedly on a sunlit terrace while two women passively look on. Dark, silhouetted trees peppered with passages of earthy green frame their actions like the curtains of a stage, emphasising Denis’s enduring fascination with the theatrical mysteries of ordinary life.