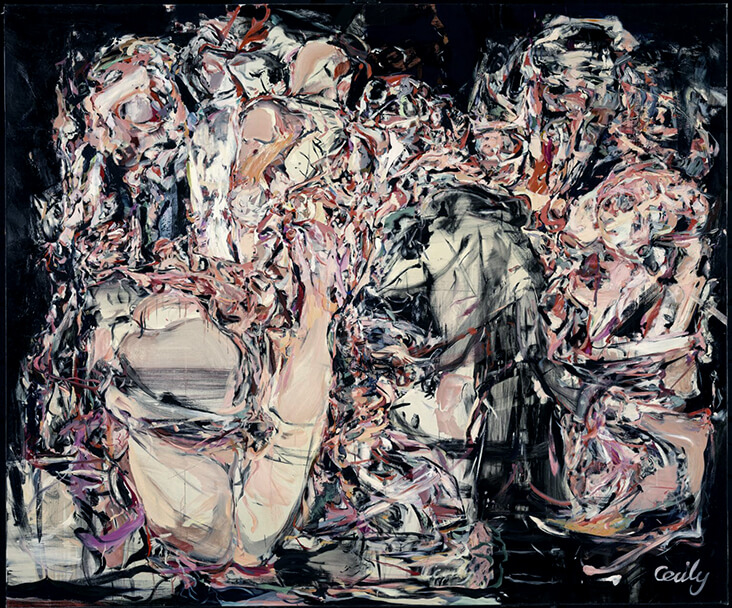 British-American painter Cecily Brown weaves Purple Sage Linen’s deep lavender shade into her expressionist canvases, letting it form shadowy rivulets of uneasy, hedonistic darkness. Brown made her name in New York in the late 1990s, painting tangled bodies lavishing in paradisiacal gardens with fleshy passages of paint in rich, indulgent jewel tones. Process, she explains is at the heart of her practice, which evolves naturally over time. “I’m not the kind of artist who has an idea and then carries it out,” she says. “It’s more like I find what the idea was through doing the paintings.” 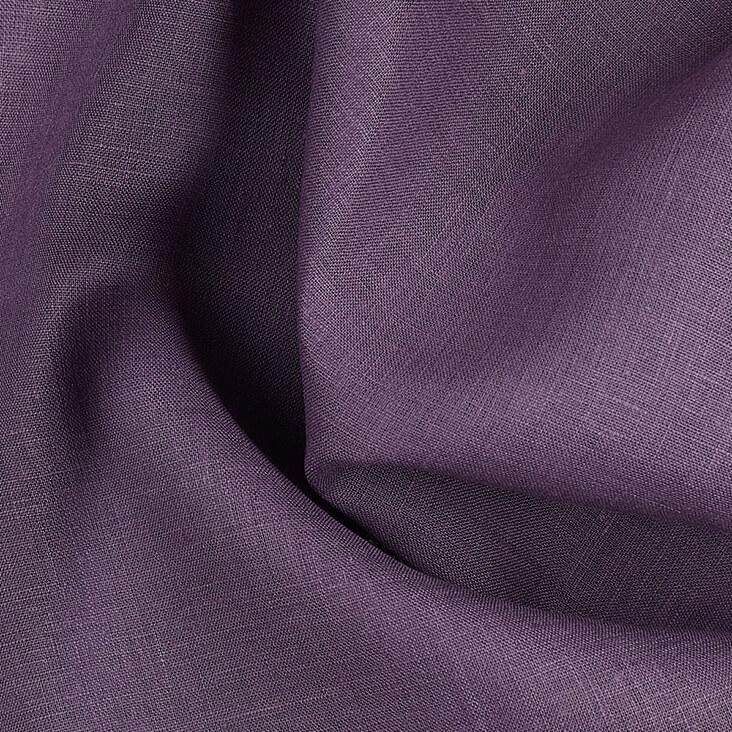 Brown was born in 1969 in the rural countryside of Surrey, England. Her mother is the Scottish novelist Shena Mackay whose novel The Orchard on Fire was shortlisted for the Booker Prize and her father was the renowned art critic and curator David Sylvester; this creative and bohemian family profoundly shaped Brown’s sense of herself and she knew instinctively from a young age that she wanted to be an artist. One of Sylvester’s closest friends was the British painter Francis Bacon and his practice came to have a marked influence on Brown’s art as an adult.

Brown moved to London to study art as a teenager, training with British painter Maggi Hambling at Morley College before taking on a degree in Fine Art at the Slade School of Art. As a young graduate in 1990s London, Brown struggled to find recognition, but a chance opportunity to study a 6-month scholarship in New York would be the making of her. Here she divided her time between waitressing jobs and painting, working obsessively on up to 20 paintings at the same time. This hard work paid off and by the time she was 29, Brown was taken up by the blue-chip Gagosian Gallery, cementing her place as a leading artist of her generation. 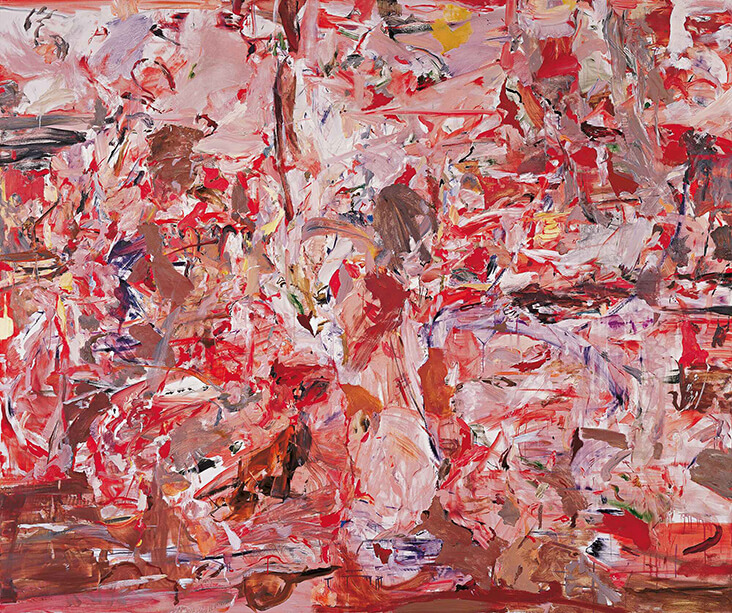 Brown’s early paintings were deliberately explicit representations of sexual acts, but by the later end of the 1990s her human bodies became increasingly abstract and obscure as if dissolving into one with their surroundings. In Trouble in Paradise, 1999, the canvas is crowded with wild tangles of semi-abstract male and female bodies, while gestural brushstrokes become loose rivulets of colour around them, rippling through shades of orange, pink and a dark violet that suggests the mysterious shadows of human flesh. 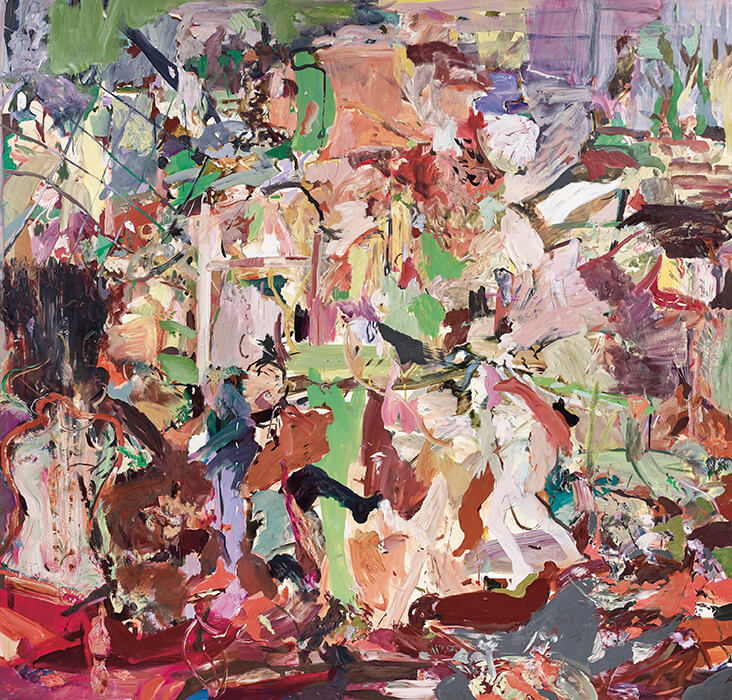 The later Confessions of a Window Cleaner, 2000-2001 is even more abstract and expressive, a riotous outburst of flesh tones that are shot through with angry streaks of searing crimson and tomato red, while thin ribbons of blazing dark purple add heightened intensity to the scene. Bedlam Vacation, 2005 is more spirited and optimistic, a dancing display of light and colour that only hints at references to the real world. Rose pink streaks emerge through leafy shades of green, suggesting human skin in amongst the landscape, while passages of deep purple seem to flicker around them, invoking the richness of half-lit shadows. 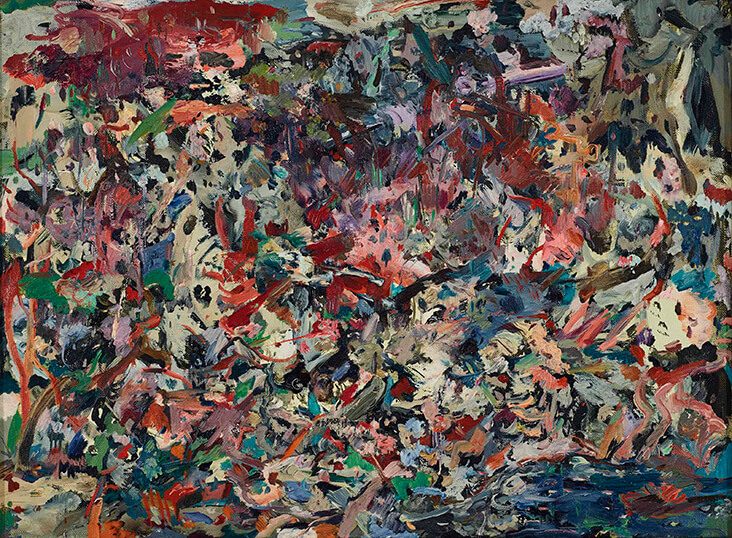 In more recent times Brown’s paintings have become even more abstract, abandoning the eroticism of earlier years for the exploration of oil paint’s visceral properties and the emotive power of colour. Untitled, 2007 demonstrates this shift in style as the entire canvas is streaked with a dense pattern of green and blue brushstrokes that suggest an overgrown wilderness, just tinged with flesh tones to suggest a lingering human presence. Brown brings hedonistic violet shades to the fore in this canvas, peppering it throughout the more vivid, elevated tones to add a threatening air of decadence and unease. The Park in the Dark, 2012 is similar in style with oblique references to the human body through biomorphic flesh tones scattered throughout, but they are small parts of this dense puzzle, which layers frenzied brushstrokes into a rich and complex mosaic pattern. Once again, deep, tart shades of violet are the dark subversion here, appealing pockets of the unknown that allow the imagination to roam free.