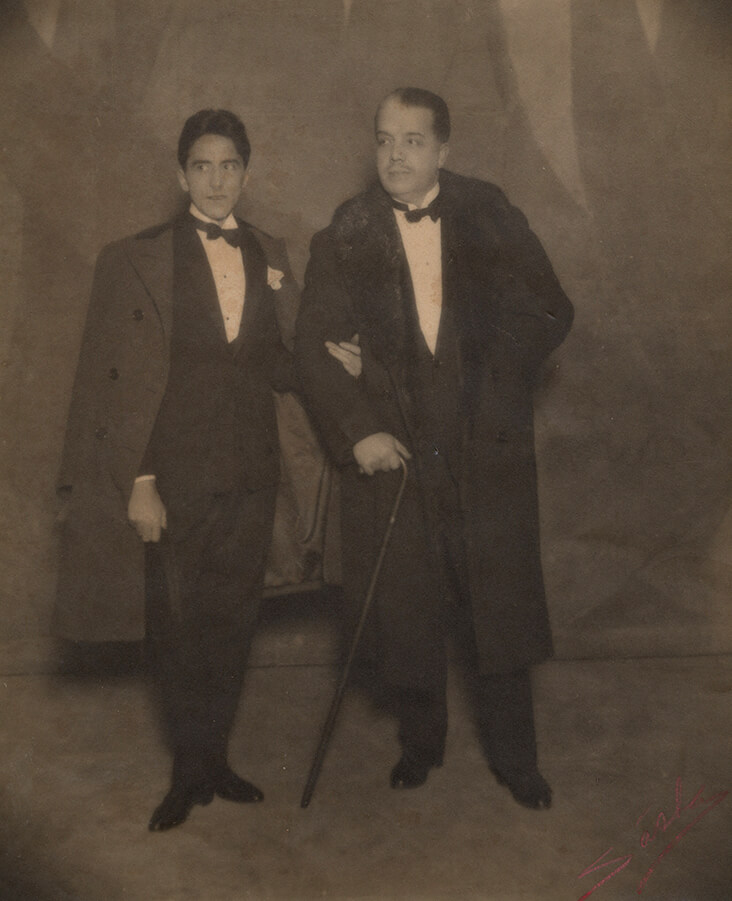 Jean Cocteau and Serge Diaghilev on the opening night of Le Train Bleu, 1924

French Surrealist Jean Cocteau led a remarkable life, spanning a huge range of genres including literature, poetry, filmmaking and visual art. From an early age he was fascinated by the ballet, and his long-lasting friendship with Sergei Diaghilev would prove one of the most influential and important aspects of his entire career. From striking poster designs to storytelling and costume, he wove his own brand of creativity into the Ballets Russes, leaving a long-lasting impact that would shape the nature of ballet for generations to come.

When the Ballets Russes burst onto the Parisian cultural scene in 1909, the young Cocteau was immediately entranced. He struck up a friendship with Sergei Diaghilev in the years that followed, and Diaghilev was instrumental in encouraging a lifelong fascination with ballet in his young protégé. Already making his name as a published poet and illustrator, when Cocteau first expressed a desire to write for the ballet, Diaghilev famously exclaimed, “Surprise me!”, prompting Cocteau to dig deep into his imagination for the wildest and most experimental ideas. 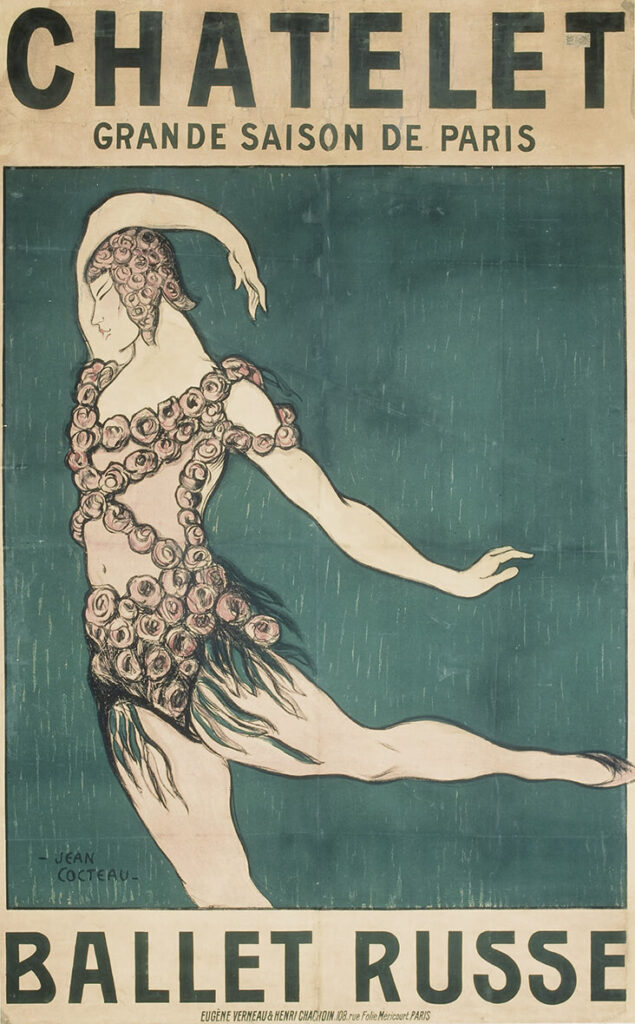 A poster with a Cocteau drawing of the dancer Nijinsky, for the company’s 1913 season. Victoria and Albert Museum, London

In 1912 Cocteau wrote the libretto for Le Dieu Bleu, (The Blue God), 1912, a story set in mythical India centring around a blue God and Goddess who charm a series of terrifying monsters and encourage love to flourish. Cocteau’s wild, imaginary world of child-like wonder was brought alive with the choreography of Michel Fokine and the set and costume designs of Leon Bakst.

The movement of dancers particularly lit up Cocteau’s imagination and he was so taken with the Ballets Russes’ star dancer Nijinsky that he made a series of striking illustrations capturing the sweeping motion of his lithe limbs through space, capturing what he called a “slender young torso contrasting with overdeveloped thighs,” adding “he is like some Florentine, vigorous beyond anything human, and feline to a disquieting degree.” 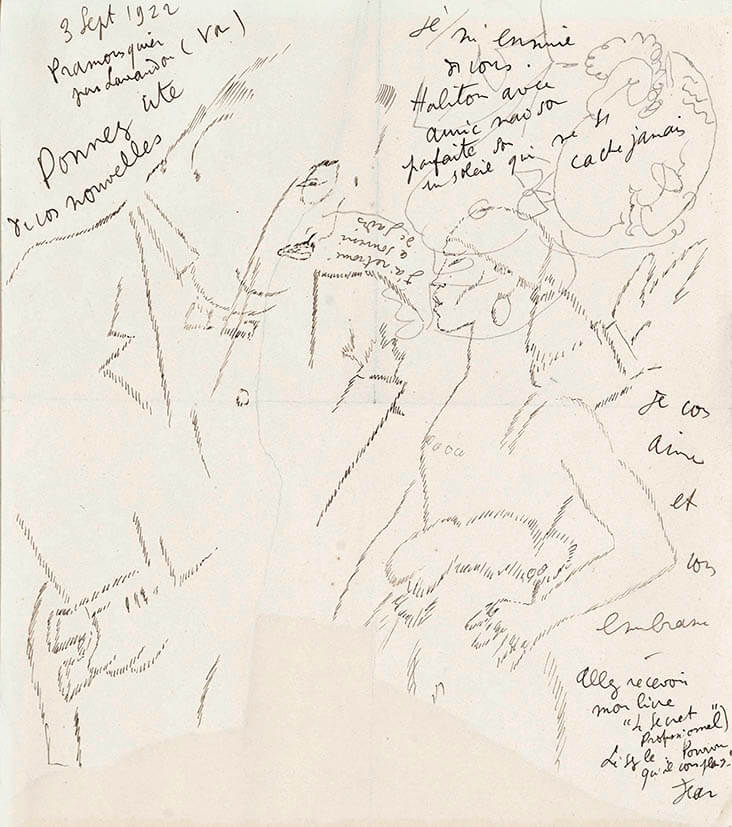 This fascination spilled out into Cocteau’s huge poster designs for the Ballets Russes, illustrating Nijinsky performing as the spirit of the rose in Fokine’s ballet Le Spectre de la Rose, 1911, with his muscular body caught mid-motion, wrapped in an intricate floral costume. Cocteau also designed a sister poster design to accompany this one, featuring the ballerina Tamara Karsavina in the same performance, playing the part of a young girl.

Cocteau continued his involvement with the Ballets Russes in the years that followed, writing the libretto for the now infamous Surrealist ballet Parade in 1917, an absurdist performance centred around three groups of circus acts, who try and ultimately fail to attract audiences for their show. Cocteau worked closely with Diaghilev to bring the entire performance together; he was instrumental in bringing Pablo Picasso into design Parade’s outrageous costumes, and the composer Erik Satie in to compose the deliberately disjointed and unsettling score, featuring unconventional noise-making instruments including a typewriter, foghorn and milk bottles. The end result was a riotous cacophony of clanging noise, movement and visuals which caused shock, uproar and astonishment in equal measure when first unveiled in Paris – both Cocteau and Diaghilev positively revelled in the scandal and the resulting attention it brought them. 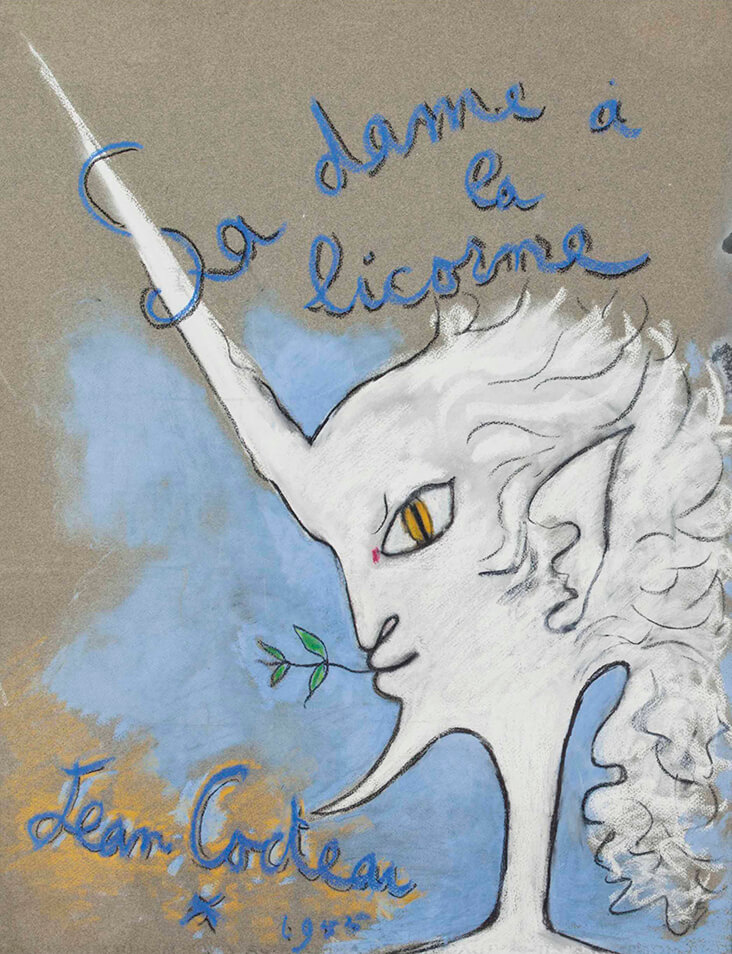 Jean Cocteau, Illustration to accompany the Ballets Russes production of La Dame a la Licorne (The Lady and the Unicorn), 1953

Cocteau’s close involvement with Diaghilev and the Ballets Russes early in his career would prove instrumental in defining his art that followed, pushing him to delve into the multidisciplinary worlds of theatre and film – he famously wrote the play Orphee in 1926 and went on to direct the Surrealist motion pictures Le Sang d’un Poète (The Blood of a Poet), 1930 and La Belle et la Bête (Beauty and the Beast), 1946.

Although Diaghilev sadly died in 1929, Cocteau would never forget the impact the great impresario had on his early years. In his later years Cocteau returned to the Ballets Russes, writing the mythical story of La Dame à la Licorne, (The Lady and the Unicorn), 1953, a tragic, absurd and fantastical tale centring around a young maiden and a white unicorn, demonstrating Cocteau’s ongoing fascination with the magical, child-like wonder of storytelling, theatre and the ballet.Jean Cocteau poster design for the Ballets Russes, featuring the dancer Tamara Karsavina in Le Spectre de la Rose, 1911