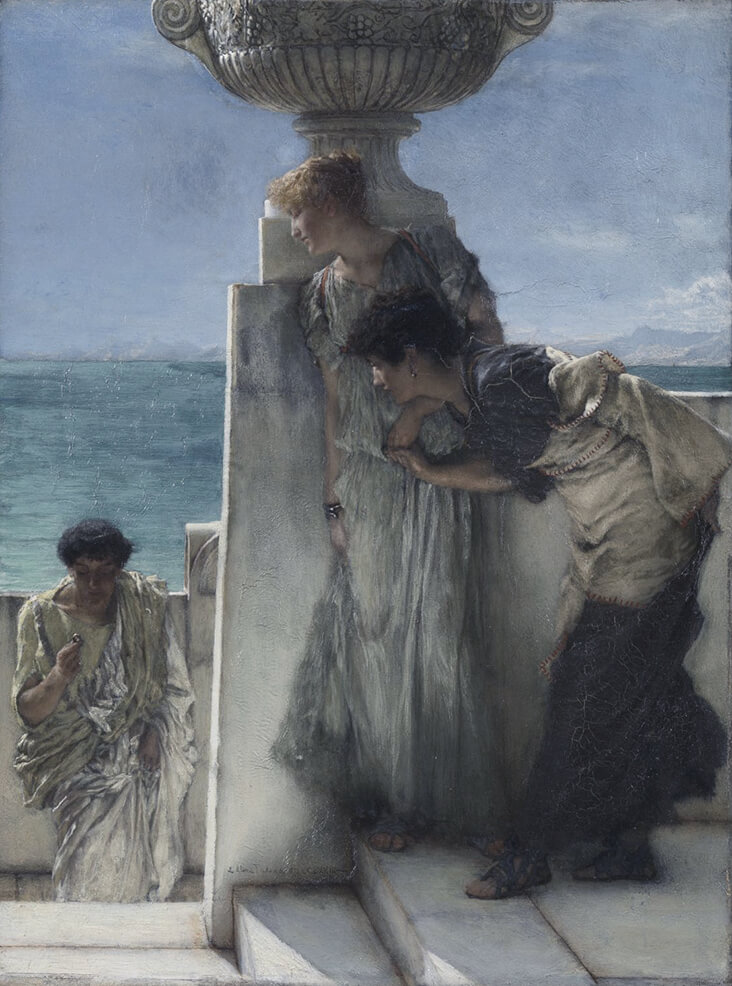 A Foregone Conclusion, 1885 image via Tate

Sir Lawrence Alma-Tadema was a dreamy romanticist, painting idealised historical scenes set amongst the marble pillars and iridescent light of ancient Greece. Cool shades of aqua blue like BLUE BAYOU Linen brought crisp, fresh lightness into his scenes, particularly when combined with the glossy marble architecture of the ancient world. In amongst these tranquil and otherworldly settings ethereal characters dressed in indulgent furs, velvets and silks waft weightlessly like ghosts from the distant past, hinting at fantastical half-told stories.

Alma-Tadema was born in Born in Dronryp in the Netherlands in 1836, but he later moved to Belgium to study at the Royal Academy of Antwerp. Fluid, sensuously painted historical scenes based on medieval architecture and stories became his speciality as a young artist. But a trip to the ruined cities of Pompeii and Herculaneum in 1863 was life-changing, prompting him to paint a series of fictional stories set in the ancient cities of Greece and Rome for the rest of his career. He would go on to make several return visits to gather photographic source material from which to paint, paying close attention to the architectural and sculptural details of ruined fragments. 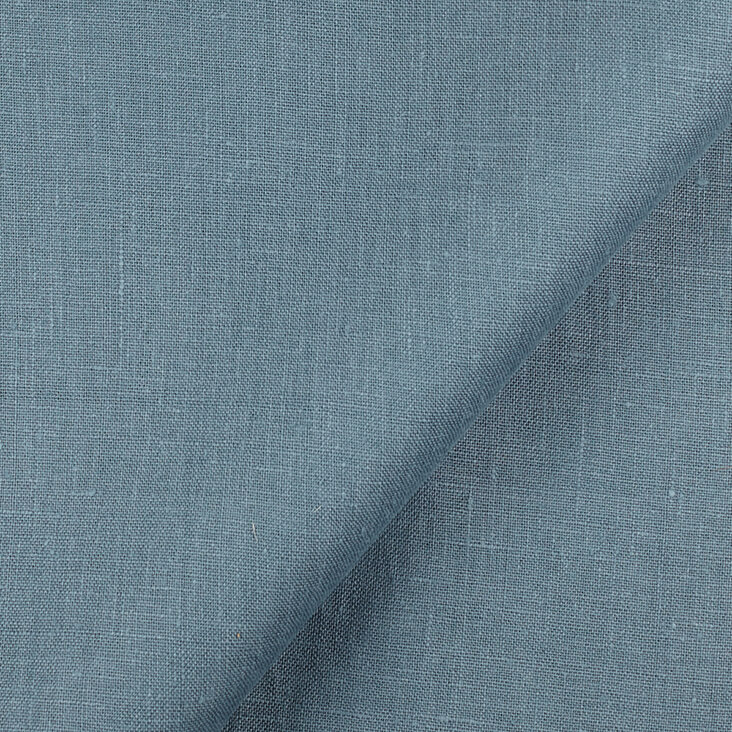 In the 1870s, Alma-Tadema moved to England, where he found a captive audience for his luminous, translucent portrayals of another time and place, painted on huge, expansive canvases. By 1873 he had become a full British citizen, and was elected as a Royal Academician in 1879. From the 1880s onwards Alma-Tadema’s paintings were smaller and quieter, celebrating fictional moments of silent wonder amongst a handful of imaginary characters, many of which were made for prestigious private clients. Writer Edwin Becker described these works in 1997 as “happy, inconsequential everyday incidents in the lives of anonymous though well-to-do inhabitants of Rome or Pompeii.”

A Foregone Conclusion, 1885 demonstrates the artist’s later style, with just three characters staged onto cold marble steps – a man approaching his expectant girlfriend and her attendant with an engagement ring – while the dazzling turquoise sea sparkles with salty and enticing freshness beyond. In The Secret, 1887, two women leisurely lounge from the stark afternoon sun in a cool marble interior, while the rippling fabric on the right figure’s legs echoes the entrancing blue darkness of the Mediterranean sea, just visible through a round window between them. 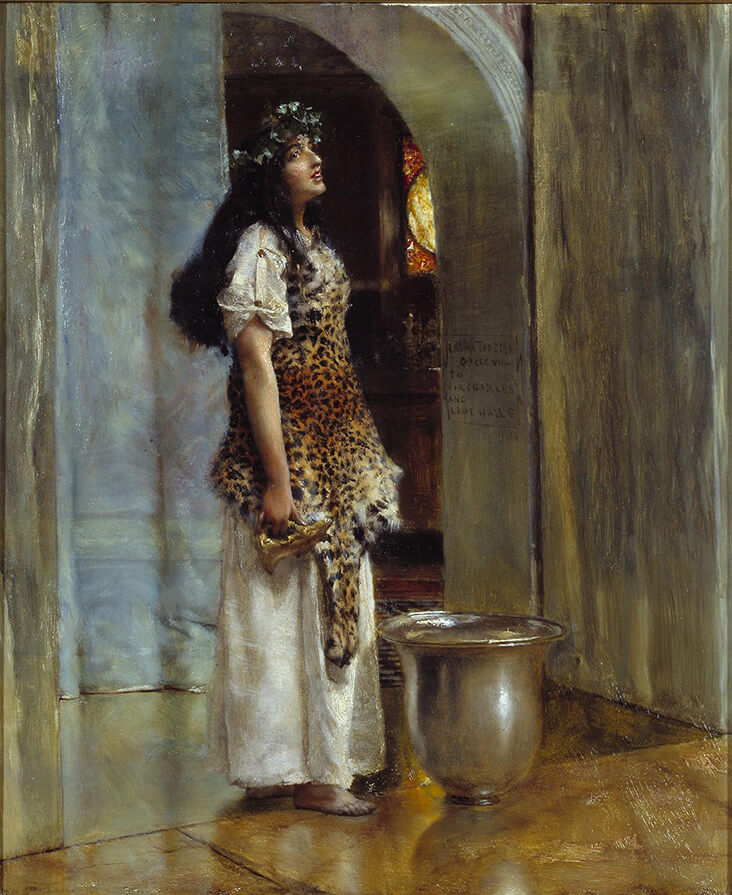 The later painting A Priestess of Apollo, 1888, marks a departure in style with darker subject matter, illustrating one of the Greek sun god Apollo’s priestesses as a ruinous temptress dressed in leopard skin, while the glossy, polished stone around her shimmers with sinful anticipation. Rather than bringing Grecian water into the scene, Alma-Tadema introduces his distinctive shade of turquoise blue as a thin sheath of transparent fabric that hangs weightlessly in the background, filling the scene with glistening Mediterranean light. 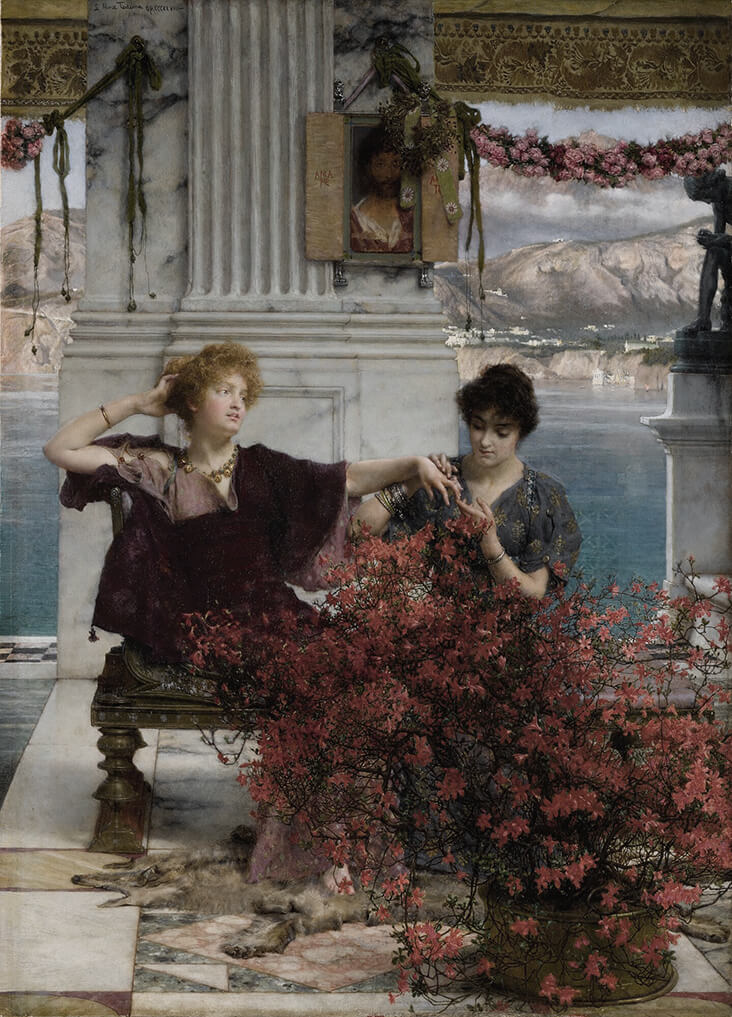 In Love’s Jewelled Fetter (The Betrothal Ring), 1894, Alma-Tadema returns to idealistic, romantic matter, documenting a young woman displaying an indulgent engagement ring to her companion, a character he based on the glamorous Marciana, from his friend, the historian Carel Vosmaer’s novella The Amazon, 1880. The two women are staged behind a dazzling red azalea bush, lending depth to the scene, while the deep purple velvet of Marciana’s draped gown is echoed in the vivid floral wreath swinging high above. But it is the mesmerising green and blue sea behind them that brings the entire scene to life, stretching across the horizon to lands far beyond, and suggesting the glistening, hopeful possibilities of a future life that is still to come.

The Colours of Autumn: Finding Time To Be Creative

Recently, I forced myself to take some time during one of my busiest times of the year, to purposefully go into nature and forage for sources of colour. I particularly love experimenting with new plants, seeing colour magically emerge from the dye bath. I love learning about the nuances of plants and familiarizing myself with…

DIARY OF A NOVICE SEWIST: The Zipper

Just like I announced in my last entry, today I would like to replace fear and anxiety with some inspiration. Some of you might remember the keywords IRONING and ZIPPER. I will talk about both of these in some detail today. But I promise you, it’s not that horrible and it won’t hurt. You have…

TUTORIAL: How to Create Beautiful Earthy Tones Naturally with Nettles and Other Leaves

There are so many dye plants in bloom during these warmer Summer months. I was recently surprised to find “Lady’s Bedstraw” growing in my neighbourhood. I am looking forward to the Autumn when I can harvest the roots for pinks and reds. With natural dyeing, you can use a few different parts of the plant:…

Is there anything better than getting out of the bath or shower and wrapping yourself up in a soft towel? While your daily bathing routine might not feel luxurious, our waffle weave bath towels can change that. To turn your bathroom into a fancy spa, just follow this tutorial and make a full set of…

Italian painter Giorgio de Chirico and ballet director Sergei Diaghilev only worked together on one Ballets Russes production, but their union would prove momentous and life-changing for both. Their collaboration was significant for Diaghilev because it was the last production he would produce before his death later that same year. It was also important for…