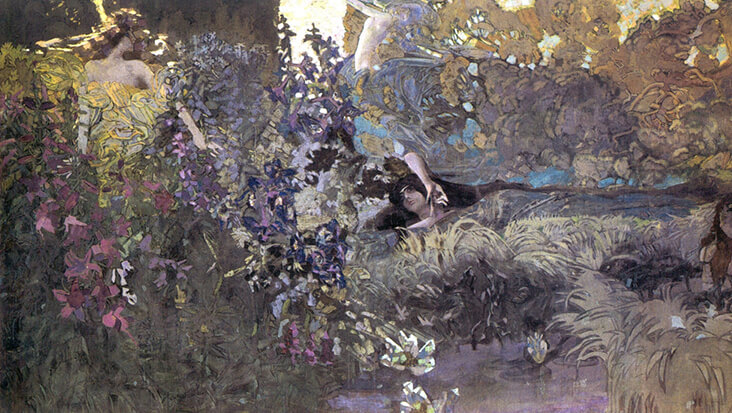 Russian Symbolist painter Mikhail Vrubel created a magical twilight zone of dwindling daylight hours with grey, purple and blue, capturing the moment when reality blurs into dreams. FOLKSTONE GRAY linen’s subtle violet grey tone was one of his favourite colours, because it allowed him to create subtle areas of mid-toned shadow as the evening quietly faded into night. Light and dark tones were enhanced in his paintings to create believable volume, weight and form, qualities which were vital to the atmospheric complexity of his art, as he explained, “I have a passion for grasping form as fully as possible.” 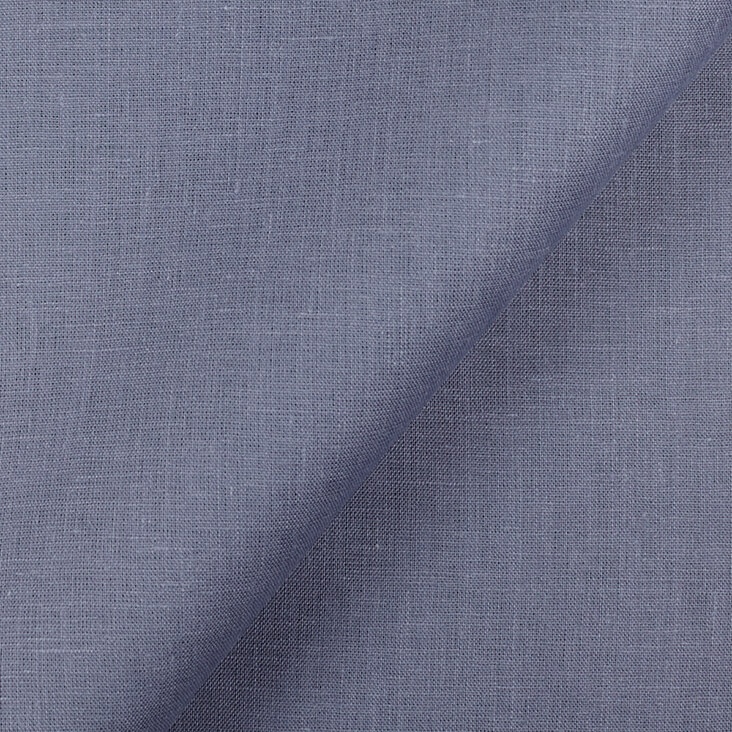 Born in 1856 in the city of Omsk in southwestern Siberia, Vrubel was descended from Russian nobility. He and his three siblings were raised as Roman Catholics and it was expected that Vrubel would follow his father’s footsteps into the military. But after experiencing the horrors of conflict in the Caucasian and Crimean Wars he changed direction, retraining as a military lawyer at St Petersburg University, and graduating in 1880. Alongside his legal studies, Vrubel took evening classes in art at St Petersburg’s Academy of Fine Arts and the side interest developed into a full-blown passion, prompting Vrubel to take up postgraduate studies in fine art hereunder Pavel Christyakov.

As a student, Vrubel was greatly inspired by medieval and Byzantine Russian art, and one of his first professional jobs while still studying was to help restore murals and mosaics in the Church of Saint Cyril in Kyiv. Many of Vrubel’s early paintings show the influence of church mosaic patterns, as brushstrokes applied in small, dappled patterns and richly tonal colours dance across the surface. After graduating Vrubel struggled to find paid work, and his suffering led to a crisis in the Catholic faith. Instead, he turned to Russian folklore and fairytales for artistic inspiration, immersing himself in fantastical stories about mythical creatures, fictional characters and faraway places. 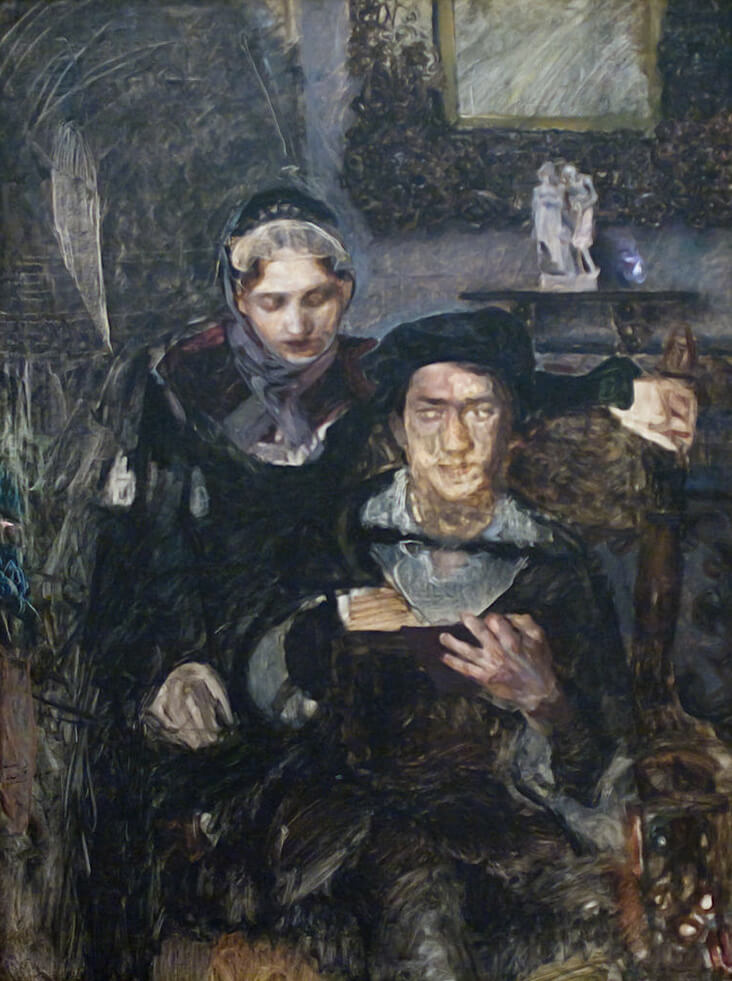 Vrubel was also deeply drawn to contemporary developments in philosophy and was one of the first to translate the literary world of Symbolism, which drew artistic inspiration from within the creative mind, into visual arts. Paintings such as Hamlet and Ophelia, 1884, demonstrate his passion for mystical and imaginary storytelling through colour and atmosphere, as dark, brooding shades of brown are off-set against painterly washes of violet shadow. The Card Reader or Fortune Teller, 1895, captures the artist’s growing fascination with alternative, occult beliefs, as a dark-eyed woman draws us in with her penetrating stare, while tarot cards are laid out in a pile before her. Decadent shades of purple and burgundy surround her, while in the background a streak of violet-grey shadow splices into the scene, bringing with it cool, refreshing light. 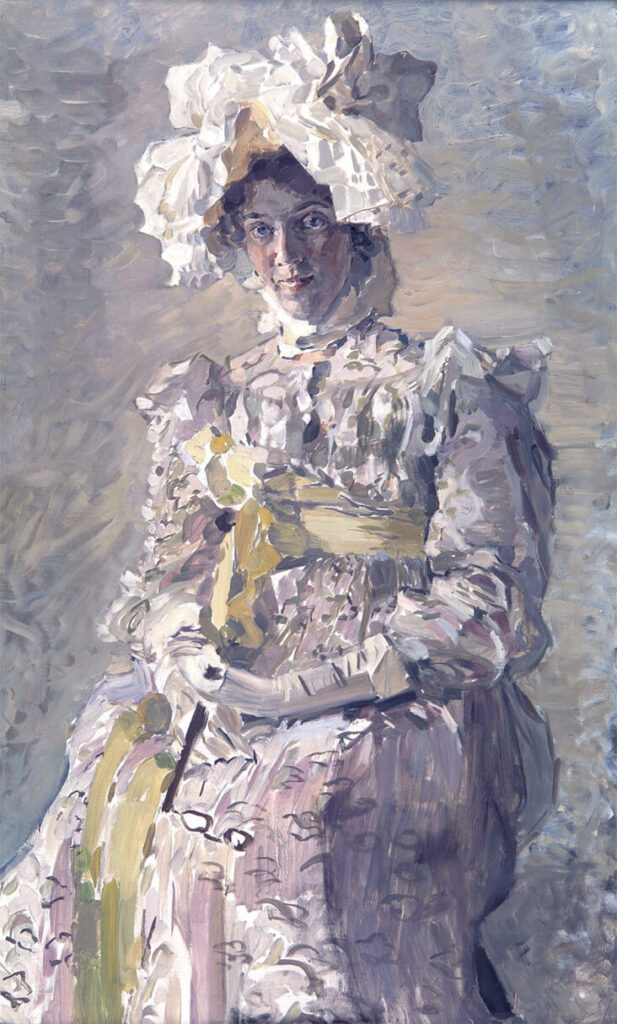 Vrubel married the renowned opera singer Nadezhda Zabiela in the 1890s. He was so entranced by the wondrous storytelling that surrounded her life that he even took up theatre set and costume design as a way to earn an income. Vrubel’s paintings of this period often featured his wife, demonstrating the engulfing love and passion he felt towards her. In Portrait of Nadezhda Zabiela-Vrubel, the Artist’s Wife, 1898, Nadezhda is painted with a flurry of rapidly applied, expressive and impressionistic marks that capture the energy and excitement of his blossoming new love affair. Across her white dress, shadow is created with fluid streaks of violet grey, making the fabric seem to shimmer with atmospheric theatricality in the light. 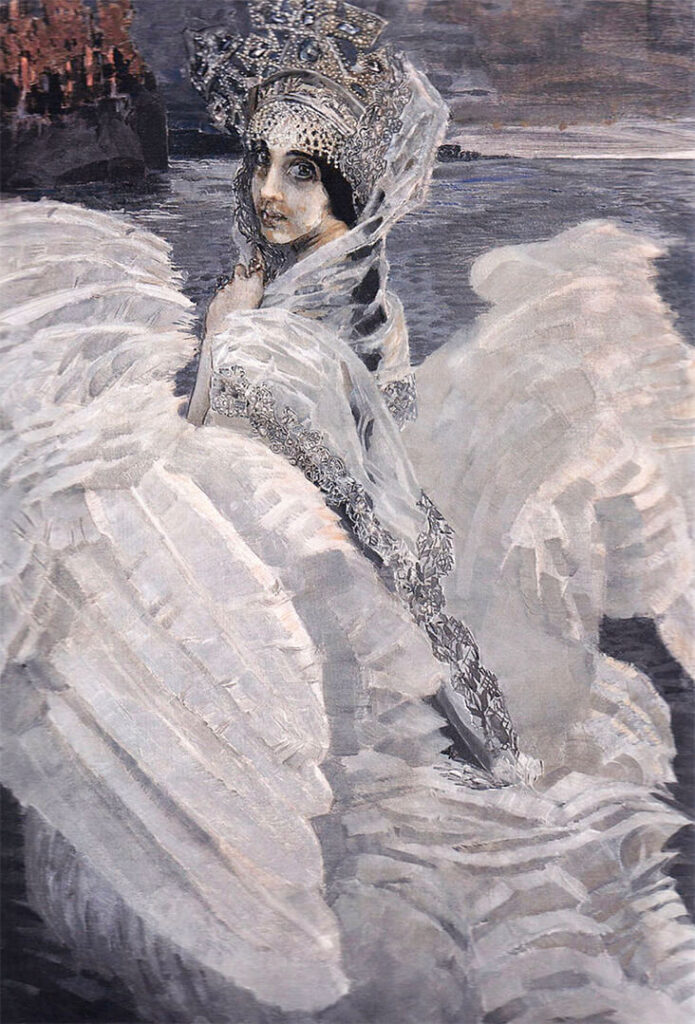 The Swan Princess, 1900, captures the artist’s wife starring as the Swan Princess character from Rimsky-Korsakov’s The Tale of Tsar Saltan. Her small, inquisitive face is almost completely engulfed by shadowy white plumage and an elaborate diamond-encrusted headdress, lifting her into a fictional world through the magic of theatre. In the far-off distance, Vrubel imagines the violet-tinged surface of slippery, night-time water is opening out for his swan princess, allowing her to transcend reality and disappear into a dream.