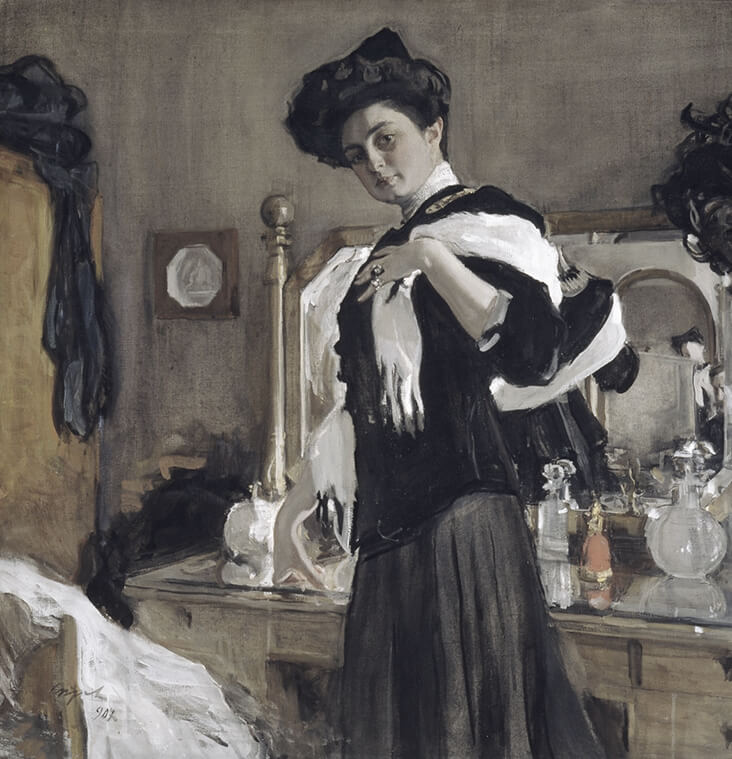 FROST GRAY’s steely metallic shade became cold light in Russian master Valentin Serov’s stirring portraits, illuminating the space around his sitters with the frosty air of Russia. Leader in the Russian Impressionist movement, pale exterior light was a vital component in Serov’s art, breaking through unseen windows to colour the interior walls, furniture and clothes of his atmospheric portraits. His favoured colour scheme was one of cool grey and silver tones, lending his aristocratic sitters an enigmatic aura of quietly unravelling mystery.

Serov was born into an artistic family in 1865 – his father was a composer and music critic with influential artistic friends who spotted the young Serov’s prodigious talents. Following his father’s death when the artist was six, Serov’s mother moved her young son to Paris so he could be taught by the esteemed artist and family friend Ilya Yefimovich Repin. Art patron Savva Mamontov was greatly impressed with Serov’s art, and he invited Serov and his mother to live in the area of Abramtsevo outside Moscow in 1875. The wide-open space of the central Russian countryside had a profound impact on Serov’s approach to making art and he spent increasing amounts of time working out of doors to capture the fall of light in areas of woodland and small, leafy villages. 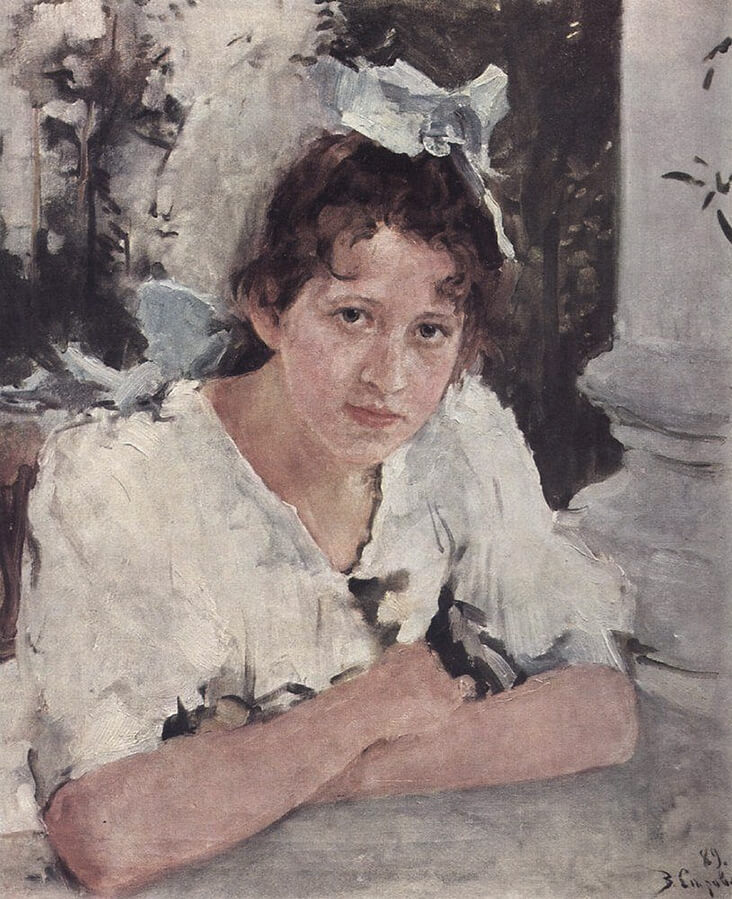 In 1880 Serov began formal art training at the Academy of Art in St Petersburg, but he found academic training stifling and restrictive. Travel offered greater inspiration to his enquiring mind and it was the French Impressionists in Paris who had the most profound influence on his style, leading him to work with paler colours, softer brushstrokes and more in-depth observations of dappled light and shade. 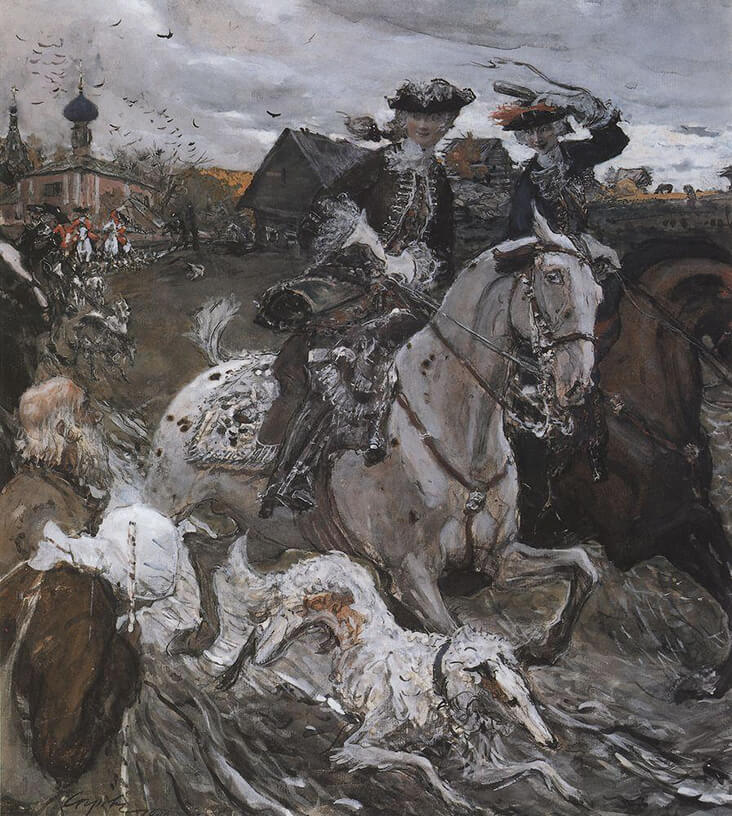 Portraiture became Serov’s primary subject from the 1890s onwards, and he developed a reputation amongst Russia’s elite for his ability to capture intense expressions and the psychological complexities of his subjects. By the 1890s Serov was recognised as one of Russia’s most prestigious portraitists, and a steady stream of commissions came his way from important and high-profile members of Russian society. 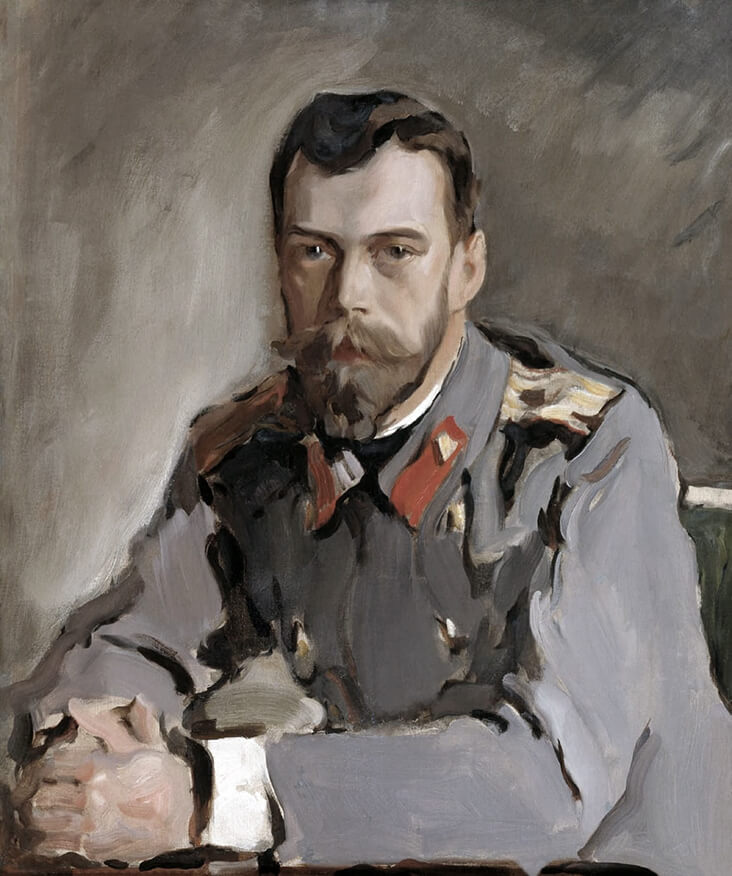 Portrait of Countess Varvara Musina-Pushkina, 1895 demonstrates the artist’s masterful command of pared back, cool colours and the subtle invocations of light. Shimmering, decadent wallpaper in steely shades of grey weaves in and out of naturally falling daylight behind the sitter, while the satin fabric of her chair sparkles like ice on glass, conveying a frosty mood that is enhanced by the model’s aloof, haughty expression. Portrait of Emperor Nicholas II, 1900, shares the same colour scheme, with cold shades of grey rippling around the model like freezing air on the breeze. The Emperor’s stiff, austere grey uniform lends him an aura of grandeur and importance, while the same grey tone is echoed in his intense, penetrating stare, which seems to hide layers of compassion within. 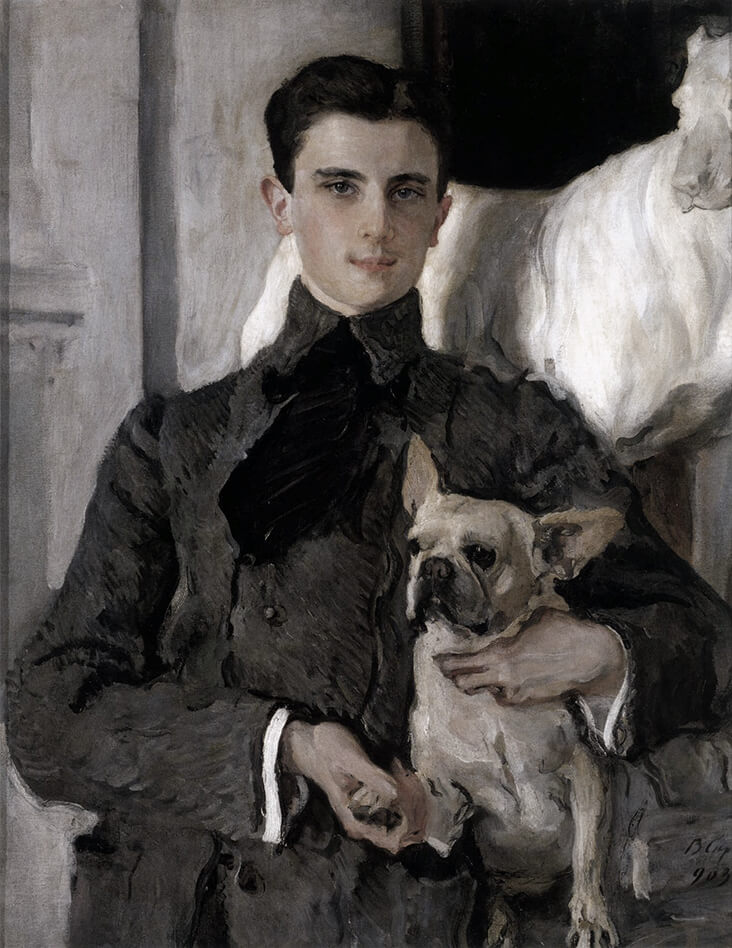 Although Serov branched out into history painting in the early 1900’s, he still continued to take on a range of society portraits, which became ever more invested with an awareness of character and personality. In Portrait of Count Feliks Feliksovich Sumarokov-Yelstov, 1903, the young count is captured posing with his two beloved dogs, while his dark eyes are filled with brimming anticipation for the future. The young man’s clothing and hair echo the brooding darkness of his eyes, but behind him pale, luminescent grey breezes through the background from beyond the confines of the canvas, creating depth, space and the invigorating freshness of outdoor light.