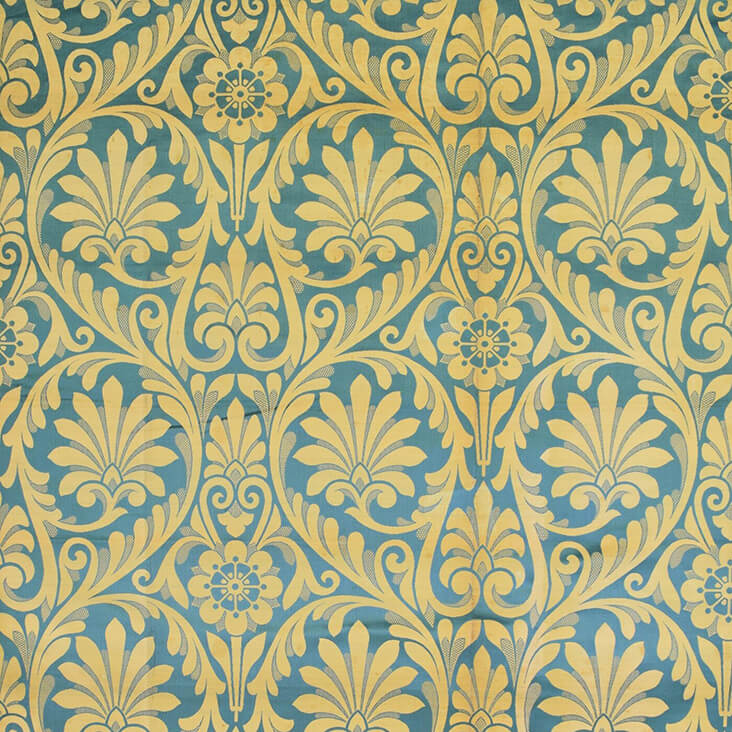 “Form without colour is like a body without a soul”.

Owen Jones was one of the most prolific and influential designers of the Victorian era, reinventing the ornate patterns and dazzling colours of the ancient world for a new era. A prolific polymath, his ideas spanned a huge range of fields including architecture, wallpaper, furniture, ceramics and textiles, all of which was informed by his extensive research into the history of ornamentation. Such was the radicalism of his wide-ranging practice that he still continues to influence and shape the way we think about pattern today. 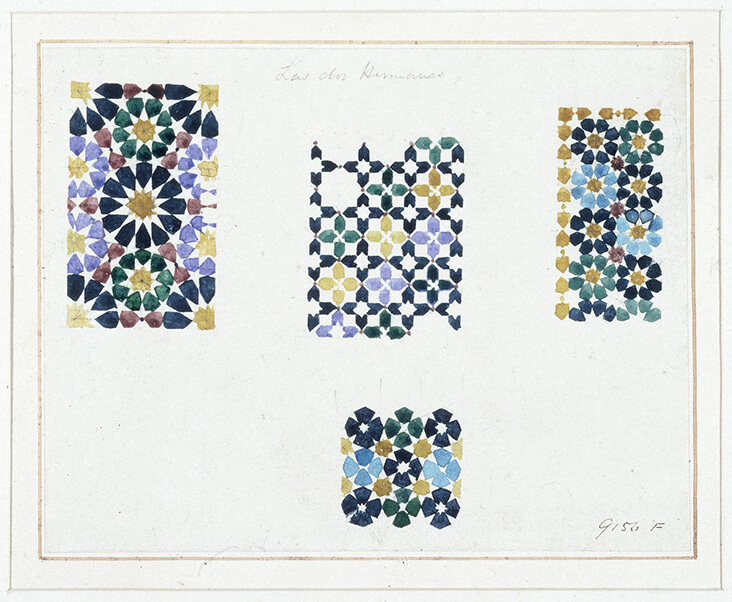 Born in London, Jones originally trained as an architect at the Royal Academy in London before turning his eye towards pattern. At the age of 23 he went on the Grand Tour, a rite of passage for many young men, travelling throughout Italy, Greece, Egypt and Turkey. A final stop at Granada in Spain was the most lifechanging aspect of the trip, allowing Jones to see the ornate and intricate Islamic designs of the Alhambra Palace. Jones spent over six months making detailed, comprehensive studies of the Alhambra’s stunning tessellated patterns, mosaics and vibrant polychromy, noting how it opened up what he called “infinite possibilities for invention of design.” On his return to London, Jones published the results of his in-depth research in Plans, Elevations, Sections and Details of the Alhambra (1842 – 45). 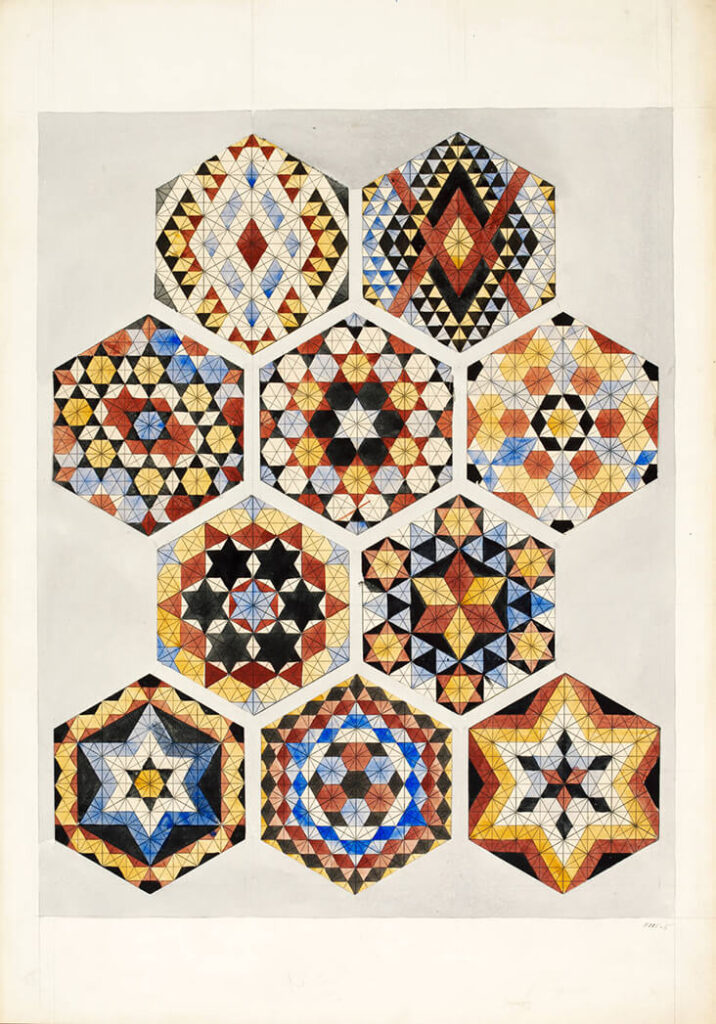 Designs for tiles in the Islamic style, 1840 – 50 © Victoria and Albert Museum, London

In the years that followed Jones was hugely prolific, creating a wide array of decorative pattern designs for various manufacturing companies inspired by Ancient Greece, Ancient Egypt and the Alhambra which appeared in a huge variety of contexts, including printed wallpaper, textiles, chess boards, playing cards and stamps. Prominent roles in interior design for the Great Exhibition of 1851 and The Crystal Palace in 1854 opened up Jones’ ideas to a wider audience and he went on to play a vital role in the founding of the South Kensington Museum, later known as the Victoria and Albert Museum, or the V&A. 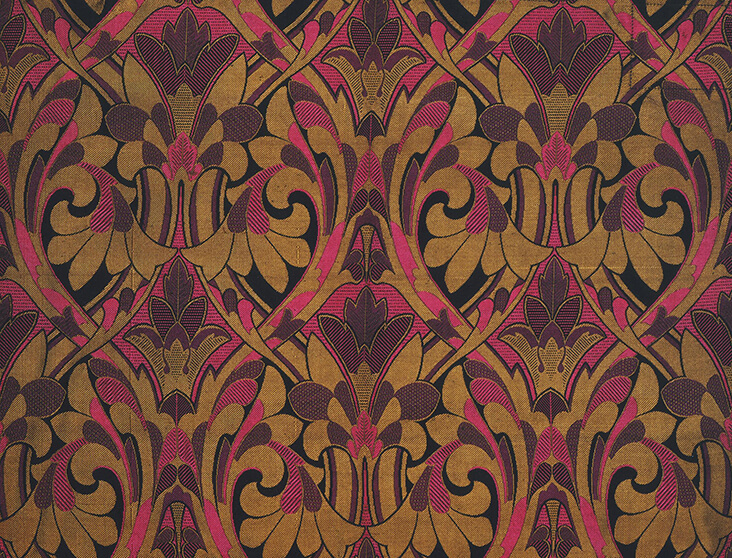 A series of high-profile lectures on the history of decoration and ornament raised Jones’ public profile further, as did his publication of the now iconic design manual The Grammar of Ornament, 1856. The text particularly celebrated the wonder of Eastern art, noting how Turkish, Moorish, Persian and Arabian patterns echoed the naturally occurring, structural patterns of nature, but in a stylised, flattened and decorative way. “True art,” he wrote, “consists of idealising, and not copying, the forms of nature.”

Jones developed these ideas into his own work as a designer, echoing the same flattened structural motifs of ancient design such as curling leaf shapes and repeat geometric prints in indulgent jewel toned colour schemes. This move was a deliberate rejection of the highly naturalistic fabrics and wallpapers that had dominated Victorian culture, which Jones saw as bad taste, because they failed to acknowledge or draw upon the detailed history of pattern. 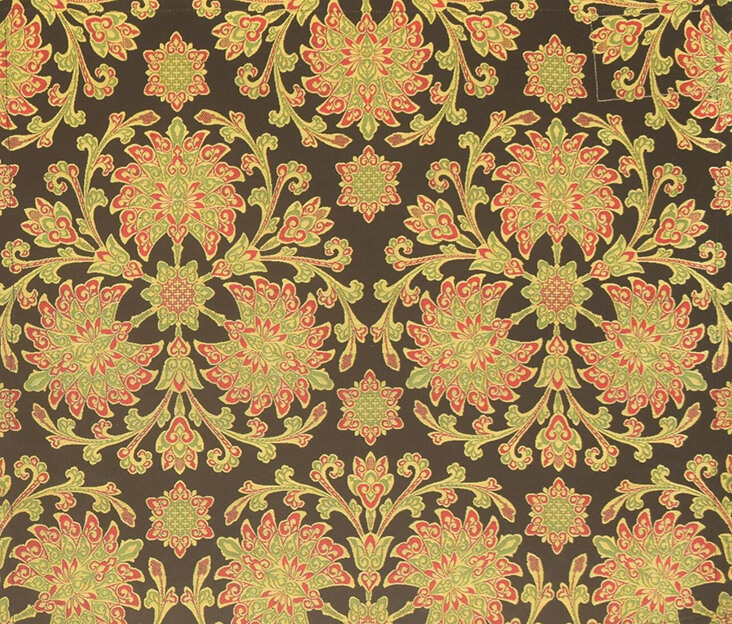 Throughout the 1870s Jones produced a number of textile designs for fabric manufacturers including Benjamin Warner and Daniel Walters & Sons, which were printed onto luxury reams of silk. Many featured curving leaf patterns inspired by the ornamentation of Greek columns or the palmettes that dominated Ancient Egyptian art. Some of his designs also emulated the furnishing fabrics and wallpapers of the Renaissance period, which had themselves been so heavily influenced by classical art.

The emphasis Jones placed on ancient principles of design, as both a designer and theorist became hugely influential throughout the following century, and his focus on structured, stylised naturalism undoubtedly paved the way for the Arts and Crafts and Art Nouveau eras. But perhaps most importantly, Jones opened up a new appreciation for the incredible art of the ancient world, arguing that this was where the foundations of design were built.