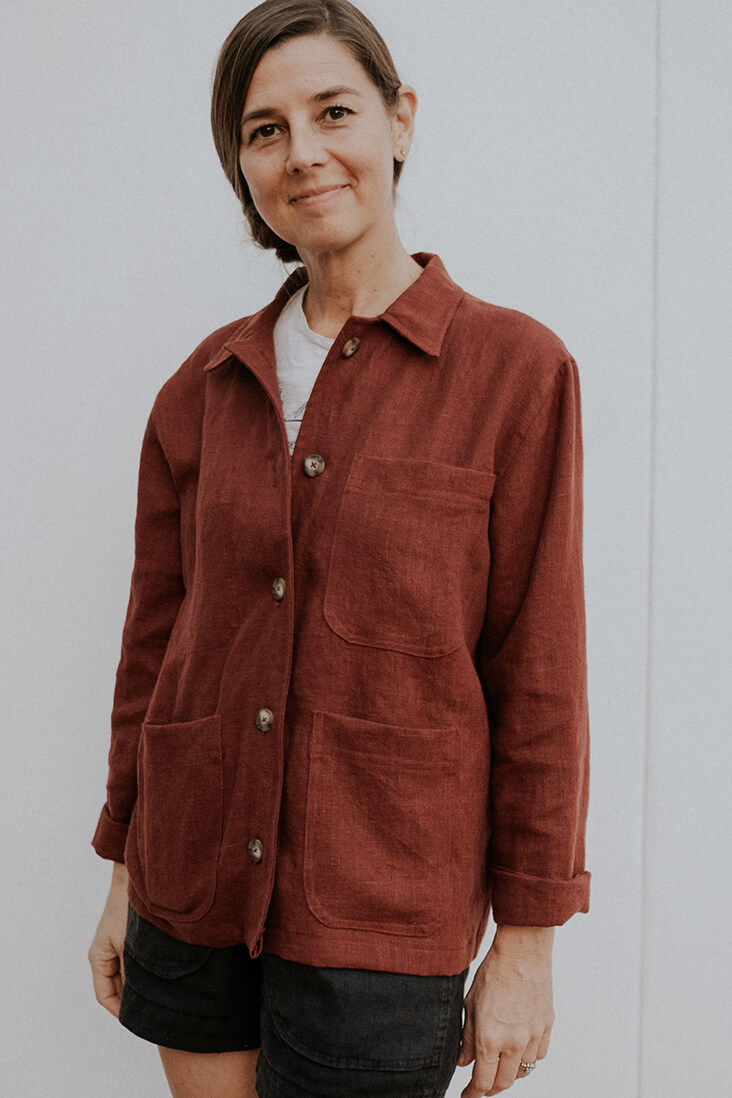 While thinking of making something for myself for the fall/ winter season, I stumbled upon the Paola Workwear Jacket Pattern, or Chore Jacket as my daughters call it. I ended up making six jackets and three of them were for men. I’m happy to share how I altered them. The Paola is one of Fabric-store’s Free Pattern offerings. We live in Florida so I knew right away making this jacket in linen would be perfect to wear with a t-shirt or for layering during the few cooler days we may receive December – March. 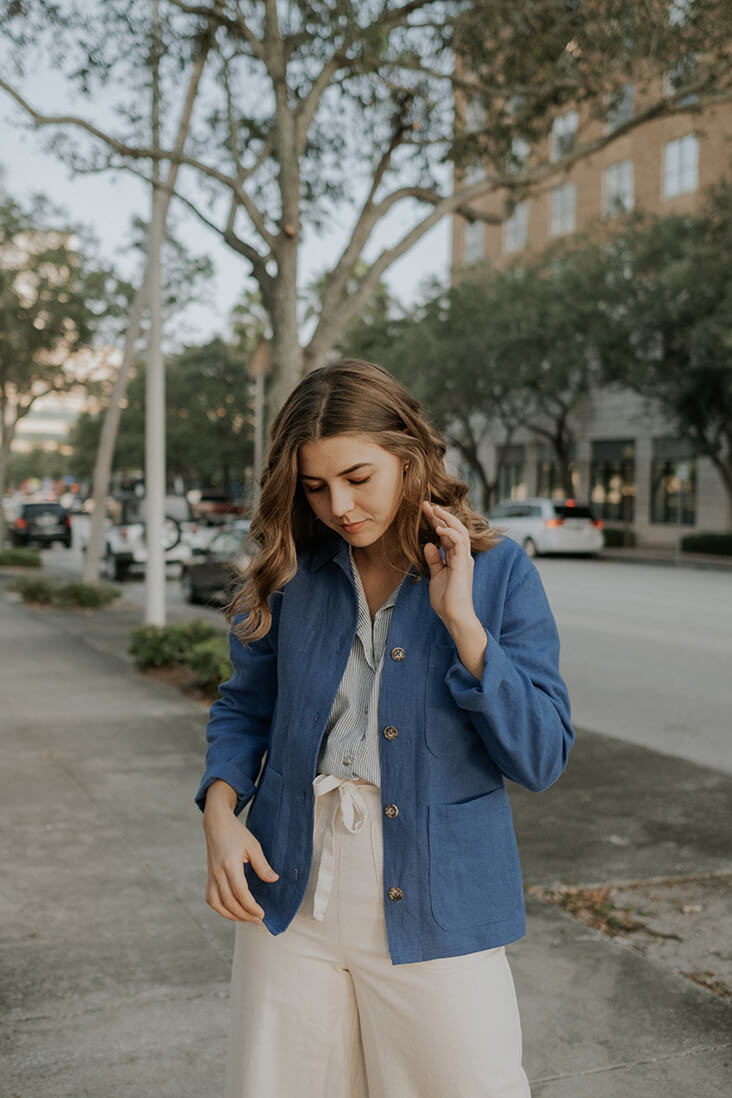 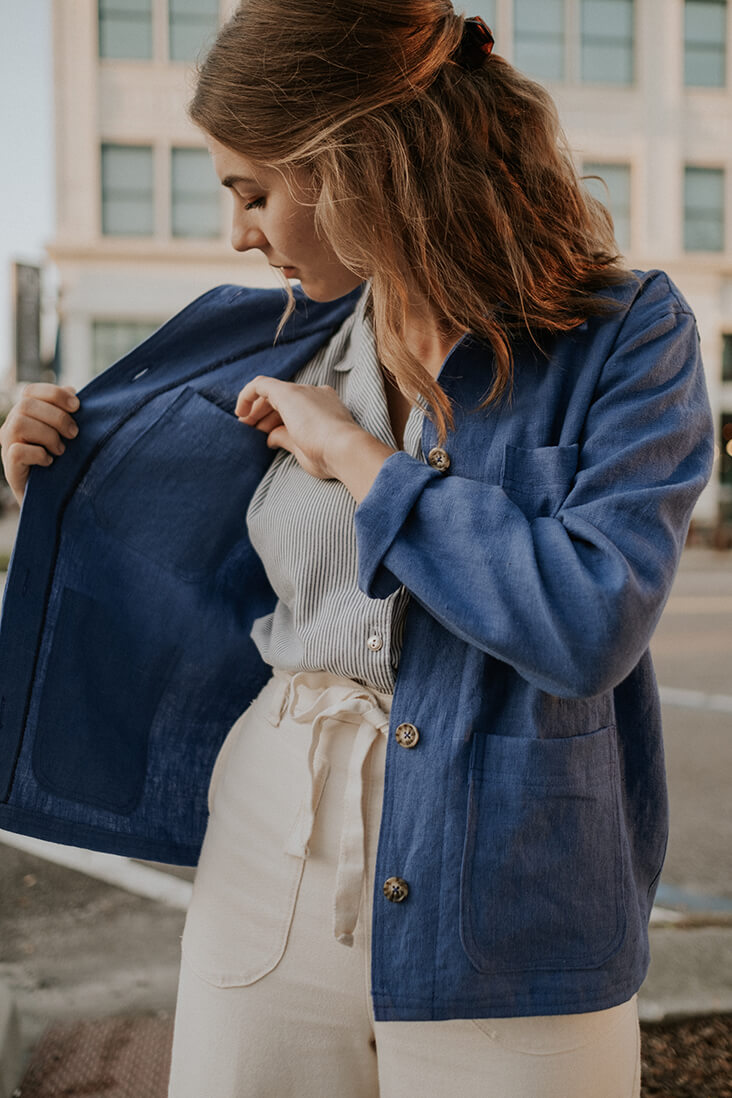 I began by making the Paola Jacket in Earth Linen for myself, then my youngest daughter asked for one in Bleached Linen; her guy friend, in turn, requested one in Black Linen; another male friend saw my Instagram post and requested one in Cobalt Linen ; my son in law requested a jacket in Red Cotton Twill, and finally my older daughter requested one in Ultramarine Linen. So, happily, many people will be warm this season.

Making a total of six Paola Jackets, five of them in 4C22 7.1oz linen and one in red cotton twill, gave me lots of opportunities to practice this pattern. I was able to make some variations and observations to share.  The pattern was so easy to use. You can absolutely make this as a beginner who is familiar with sewing basics. The only part that you may have to move slowly through is the attaching of the collar. Fabric-store did an amazing job showing each step on the tutorial featured on a blog post about the jacket. 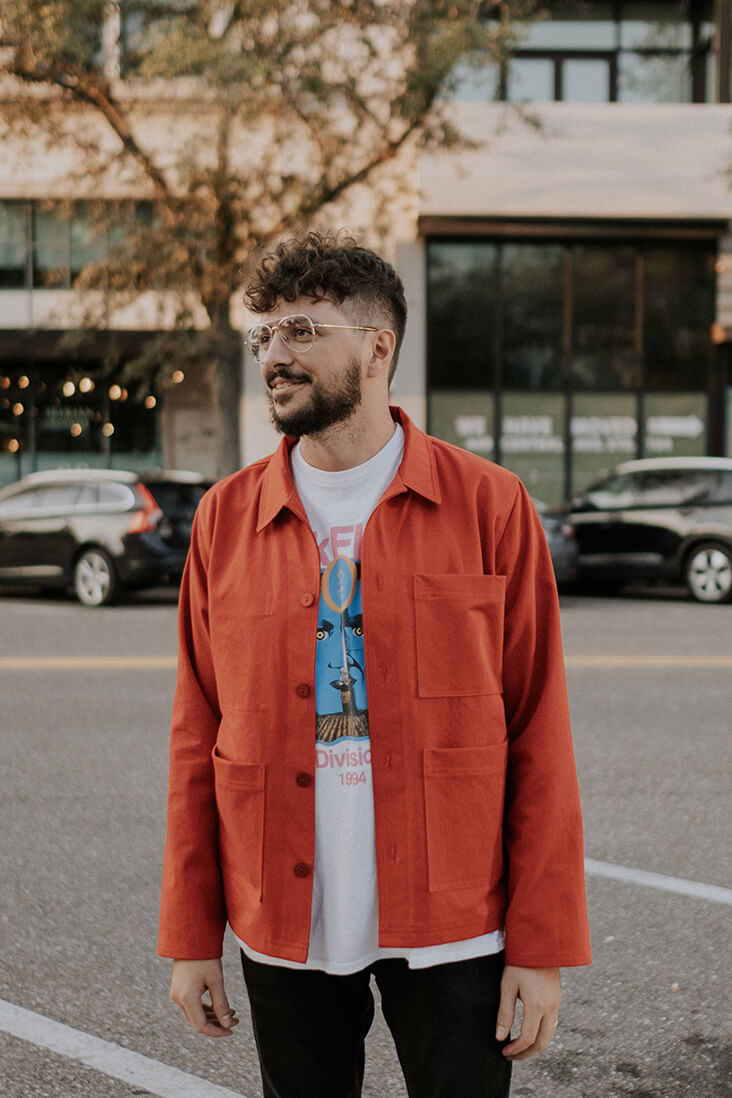 For the men’s jackets, I used the size guide to estimate which size might work for them even though it has women’s sizing. This wasn’t too tricky and I measured their shoulder width to make sure I got it correct comparing the width to the top of the back piece pattern.  For men, you also need to put the buttons on the opposite side – buttons on the right, buttonholes on the left. For the pockets on the cobalt jacket, I made the curves on the pockets into angled edges. The red and black jackets got squared pocket edges.  For the remaining jackets, I stuck with the pockets as designed within the pattern. 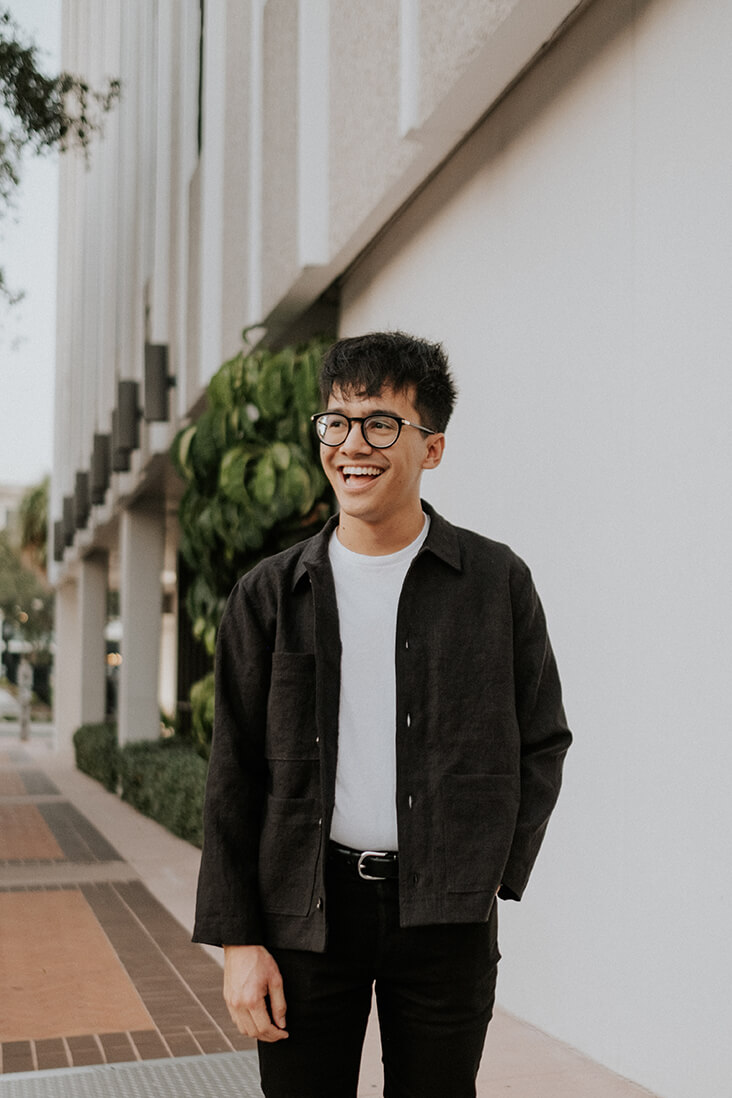 The only other alterations I made to the pattern as instructed was using a French seam for the sleeve and side seam instead of the flat-felled seam. I found the top stitch required for the flat-felled seam difficult to reach all the way inside the sleeve down to the cuff. I instead used a French Seam for both the sleeve and side and then was able to topstitch down the sides of the body, while still having a very finished seam inside the sleeve. I also decided to place one of the upper pockets on the inside.  This is a stylistic choice we had seen on other chore jackets.  This is simple to switch during the pocket pinning in step 1 of the tutorial.

The Paola Workwear Jacket is an amazing pattern! It is so on trend right now and you should feel absolutely confident in trying it if you have not made one yet! Maybe you’ll end up making several like me.

Ma Ma Osa is a handmade clothing brand that offers heirloom quality garments and patterns, hand-made by a mother. We celebrate the cherished craft of sewing and seek to honor the art of slow fashion in all our practices as a brand.

Other posts by Alisha Cooke

Back in November, I stumbled upon the FS Charlie Pattern set while searching for a high-waisted pant pattern. I was instantly drawn to these classic designs. I started by making the Charlie Pants in NATURAL Linen in the fall with the intention of eventually sewing a couple matching blouses. Last weekend, I completed my first…