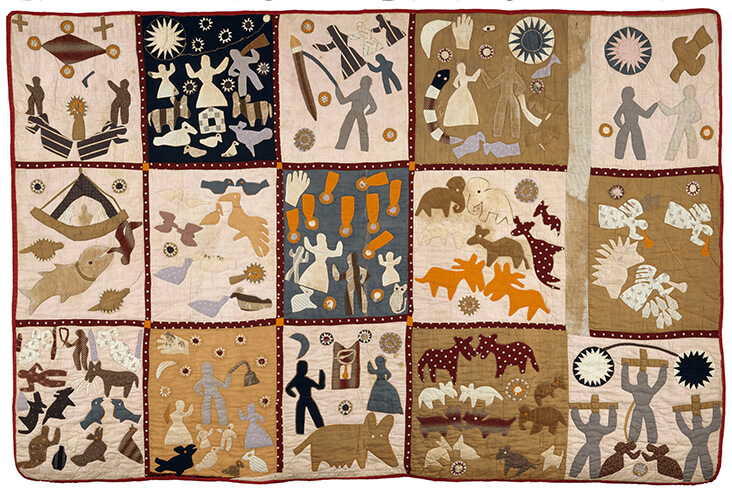 By the end of the American Civil War in 1865, quilting was an established practice across African American communities. But as emancipation gradually emerged, so, too did new approaches to quilting, which shifted and adapted to suit the changing times. No one overarching style ruled, but some of the most celebrated quilts of the era had a distinctly feminist, political agency, expressing ardently powerful stories, while others continued to explore the complex and dazzlingly inventive motifs and patterns of earlier generations.

In the immediate aftermath of the Civil War, many black women took up work in houses or small farms. Quilting continued to be a vital necessity for warmth and comfort in African American households, or one that could be sold to bring in additional family income. Fabric was more readily available during this time because of big cotton harvests and American textile mills, but many African Americans continued to find resourceful and inventive ways of reviving scraps of discarded clothing, ticking, fertilizer, and grain sacks and burlap. Some even opened up men’s suits at the seams and used the middle layer for extra warmth.

The swapping of ideas became common practice during this time, particularly when magazines emerged that printed both traditional and innovative quilt patterns. It was during this era that the ‘Pine Cone’ or ‘Pine Burr’ quilt, with its complex array of layered diamond shapes became widespread, particularly across Southern African American communities. Other popular designs included patchworks, crazy quilts, nine-patches, and log cabins. But as renowned quilt historian Cuesta Benberry has noted, the interchange of ideas across all nationalities and classes of women throughout this era meant styles amongst African Americans were hugely divergent: “…it is a simplistic notion that legions of black quilt makers produced works displaying a single aesthetic orientation.” 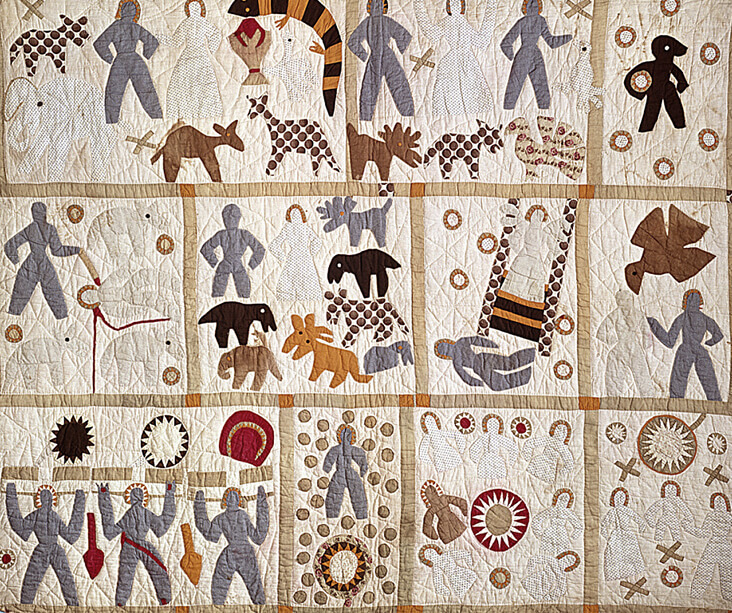 As industrialisation raged across the United States, cities promised a vast wealth of new opportunities for younger generations of African Americans. Increased prosperity meant less necessity to ‘mend and make do,’ so the domestic need for quilting was no longer considered essential, opening the medium up for creative possibilities. Yet the powerful social ties bound into quilting remained, as family, friendship and community groups continued to gather to make quilts and share ideas. This allowed concepts, stories, and techniques to be passed from one generation of women to the next. Benberry points out how important this has made quilting in expressing a distinctly female language throughout history, observing, “I soon realised that any investigation of quilt history, a female-dominated narrative, would also be closely allied to women’s history.”

One particularly important strand of inter-generational quilt making was the ‘story quilt’, which told personal, Biblical, and historical tales through pictorial depictions at a time when many women had not been taught how to read. The great African American quilt artist Harriet Powers was born into slavery in Georgia and had never learned how to read, but the language of making quilts was second nature. She raised nine children before going on to produce and exhibit her richly complex story quilts from 1886 onwards, using the medium of fabric and stitching to tell Biblical tales or stories of the struggle for freedom. Such was the popularity of her designs she is now widely regarded as the “mother of African American quilting,” while historians have also compared her striking visual imagery and earth toned colours with the textile traditions from the West African kingdom of Dahomey. 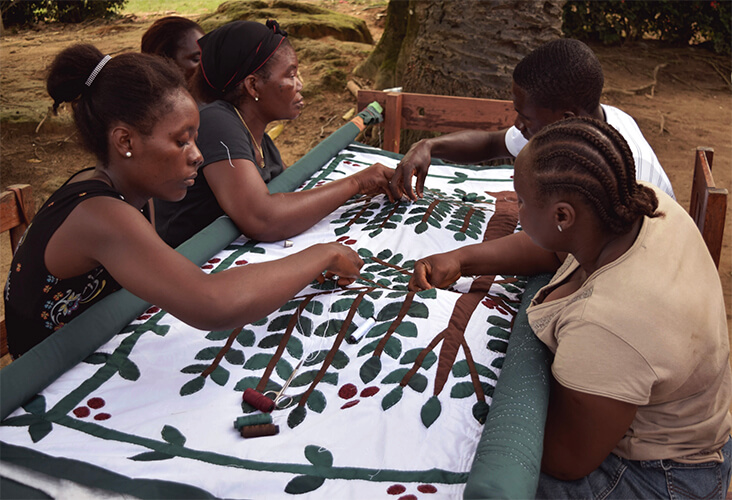 Martha Ann Ricks was a contemporary of Powers who had been born into slavery in Tennessee, but members of her family were returned to Africa by the Tennessee Colonization Society. Ricks first learned to craft quilts from her mother and grandmother and continued the practice into adulthood. As an adult, she was so inspired by Queen Victoria’s fight to keep Liberians and other Africans from being captured and sold as slaves that she even made a quilt for the Queen titled Queen Victoria with the Coffee Tree Quilt at Windsor Castle. Her design featured over 300 coffee tree leaves in honour of African American life in Liberia, where the tree grew in abundance and symbolised economic security. She eventually travelled to England to present this work directly to the Queen to thank her for her role in the abolition of slavery and was awarded a Royal escort on her travel home. Though the quilt is now lost, its legacy remains strong, while various quilters since have made replicas in tribute. The way Ricks seamlessly blended politicised subject matter with a distinctly female method of production proved just how resonant an art form quilting could be, and her influence continues to be felt throughout culture today.

I have always wanted to make a shirt dress but had always been very intimidated to give it a try. The collar and buttonholes were enough to deter me. Having successfully made a few other FS patterns, I felt up to the challenge. The instructions you get with the patterns are unmatched. I felt ready…

Tell us a bit about yourself and what you do.   My name is Georgia, I am a 24 year old fashion designer living in Brisbane, Australia. I’m passionate about slow fashion, minimalism, sustainability and ethics. Why do you sew? I have always loved being creative, and sewing has always been a way for me to…