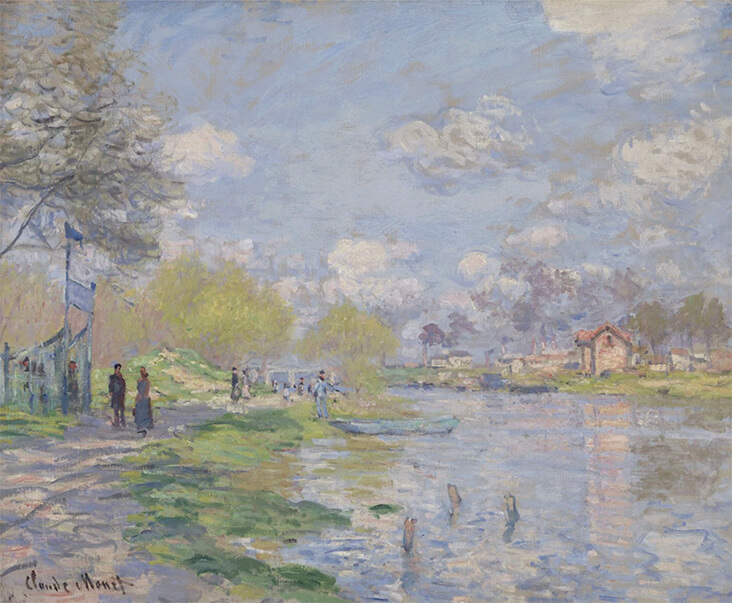 Claude Monet was entranced by the polished sheen of water, observing with fascination how it could reflect sky and land on its glossy, undulating surface. The subtle metallic shade of HEATHER Linen allowed him to capture the cool freshness of this rippling water, with patches of lilac-tinged sky and cloud scattered across its constantly shifting surface. A leader in the French Impressionist school, Monet was driven wild by his obsession with the impossibility of capturing the movement and light of water on a painted surface, writing in his journal, “Once more I have undertaken things which are impossible to do; water with grasses waving in depths… It’s wonderful to see but it drives you mad to want to do it.”

Born in Paris, Monet’s family relocated to the coastal town of Le Havre when he was five years old. It was here that his love affair with water began as he spent hours trekking across the wide-open coastline. Setting out to become an artist from an early age, Monet initially received artistic training from the College du Havre. In 1856 he met and befriended the landscape painter Eugene Boudin, whose fluid approach to painting the French coast in en plein air techniques had a profound impact on the young Monet. 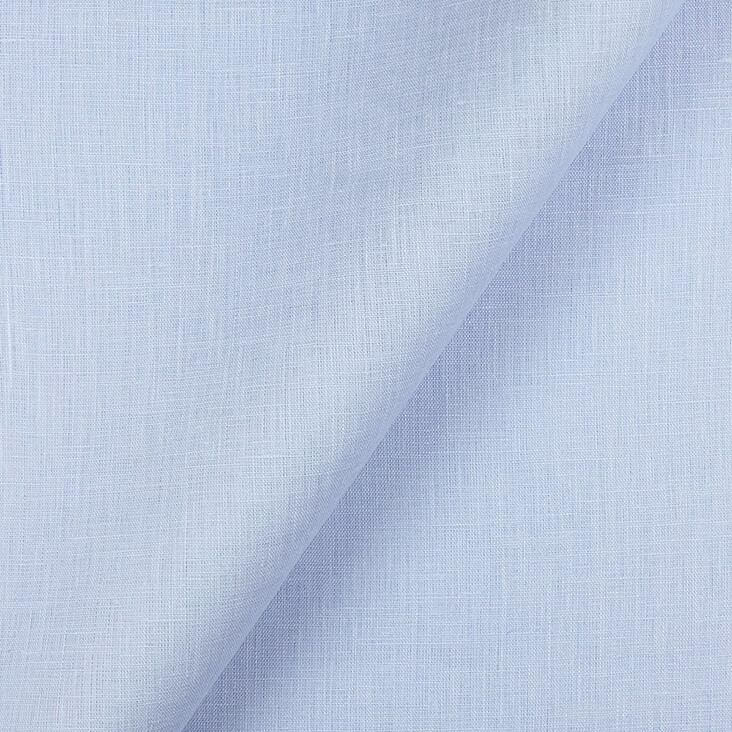 In 1859 Monet moved to Paris to study art; rather than studying at the traditional Paris Salon, Monet chose the more progressive Academie Suisse, where he first met the likeminded painter and later fellow Impressionist Camille Pissarro. Further training in the studio of Charles Gleyre allowed Monet to befriend Pierre-Auguste Renoir, Frédéric Bazille and Alfred Sisley and it was here that the foundations of Impressionism were dug in.

By the 1870s Monet had fully embraced en plein air painting, working directly from life in all times of day and weather conditions with his portable easel and canvases to capture the fleeting effects of nature as they passed before his eyes. Settling with his family in the suburb of Argenteuil by the river Seine, he made reams of paintings exploring the free-flowing, constantly shifting water that gushed past his home. Spring by the Seine, 1875, captures the fresh, invigorating light of spring as pale, icy blue sky opens out overhead, dappled with a small smattering of clouds. But it is the glossy, mirrored surface of rippling water that really draws our eye in, as chilly shades of blue, lilac and silver suggest the last remnants of winter. 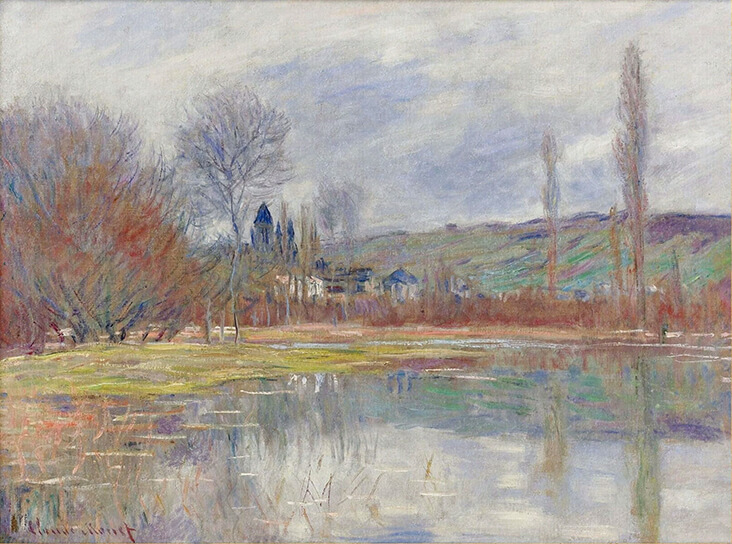 Monet moved with his family to the nearby town of Vetheuil in 1877, but his fascination with capturing the steadily flowing water of the river Seine persisted. Following the death of his first wife, Monet’s work became more brooding and atmospheric, with soft edges and hazy light. Spring at Vetheuil, 1881 is sombre and introspective in mood as dry, bare trees in autumnal browns bristle in the distance. The sky overhead is painted in bruised shades of heather and lilac that reflect in steely cold water below, just flickering with the subtlest hint of movement.

By the 1890s Monet had relocated to Giverny with his second wife Anne, where he established his famous Japanese garden. Monet designed his private garden with a water lily pond and Japanese bridge as a site for contemplation and relaxation. He came to adore it as an isolated oasis from urbanisation, writing, “My garden is my most beautiful masterpiece. I work at my garden all the time and with love.” It was here that Monet was able to truly indulge in his love affair with water, obsessively painting changing patterns of light and weather reflected across the surface of his vast private pond. In Water Lilies, 1906 and Water Lilies, 1907 Monet eradicates the sky completely, homing in on the hazy, ambiguous qualities of water alone. Painted in muted shades of heather, mint green and blue that seem to shimmer in and out of the light, these late canvases reflect the fragility, transience and poetic mystery that is held within the depths of water.