The Hidden Histories of Indigo 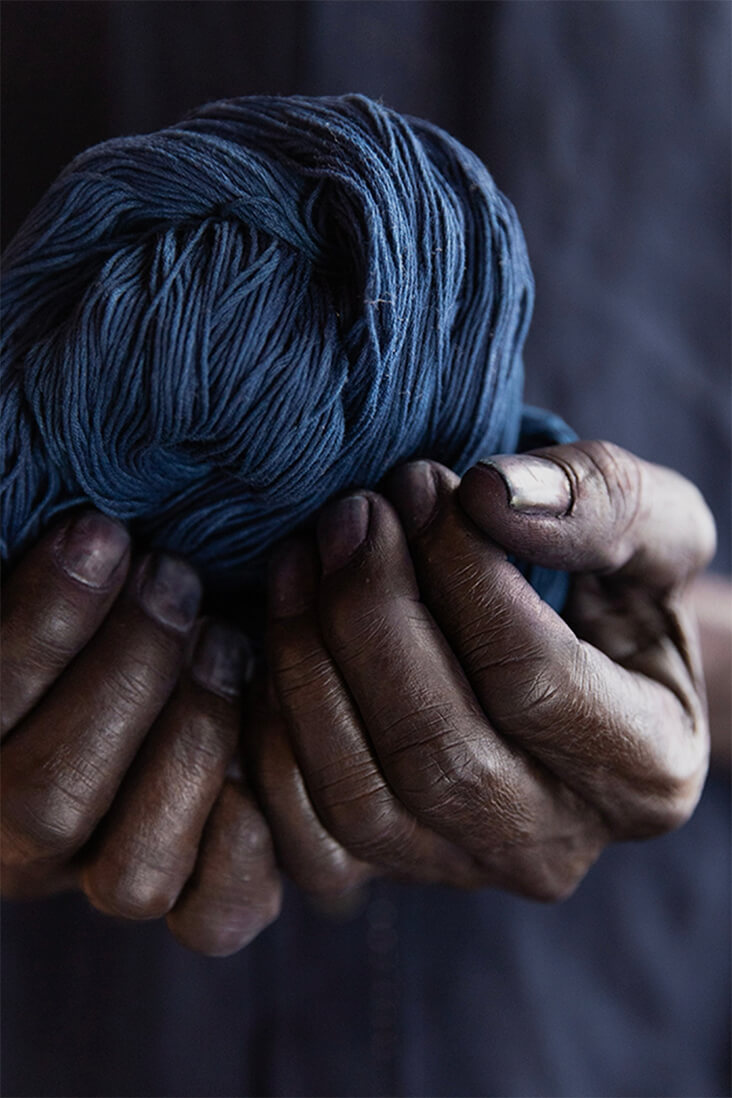 It is hard to imagine the humble-looking, dusty green indigofera tinctoria plant would hold deep within its roots such a vast and complex history. Well known as the origins of indigo dye, this tropical plant has tracks that can take us all the way back to ancient Peru and Egypt, the tribes of Africa, India’s early royalty, the Samurai soldiers of Japan and the Qin and Han Dynasties of China. In this new series, we will explore some of the first cultures that harnessed their own indigenous indigo production, delving into the fundamental role this colour came to play in their customs, rituals and traditions, many of which still exist today.

Indigo is often traced back to India during the Greco-Roman era, because Indians were the first to turn indigo production into international trade. It was rare and difficult to produce, but the European market were said to be so infatuated with this deepest, darkest shade of midnight blue that they named it indikon, meaning ‘from India.’ Indian fabrics had a vibrant, steadfast colour and richness of texture that was unrivalled, making their products highly desirable both locally and abroad. As well as producing pure indigo fabrics in cotton and silk, India also became well known for adding elements of block print designs and exquisite embroidery, producing fine fabrics that were reserved for royalty or those with the most political power and authority. The city of Agra in India was the main centre for indigo production, where various shades of blue fabric were made – the most popular with the western market were known as ‘Bayana’ and ‘Agra.’ ‘Sarkej’, from the city of Ahmedabad also became highly desirable in ancient times. 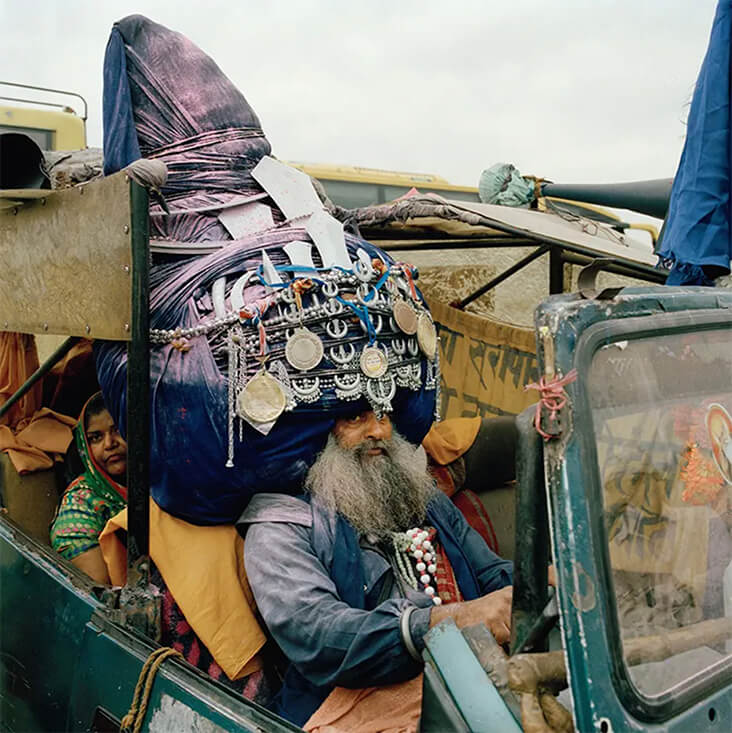 The magical properties of this wondrous plant were also discovered by various other indigenous cultures around the world, including Africa, where an ancient craft of growing, harvesting, fermenting and dyeing indigo has evolved into a highly sophisticated language that continues today. African indigo textiles vary from region to region; batik, tie-dye and other resist processes have become popular with Yoruba people, who add beans, grains of rice, chips of wood, stones and twine added to the dying process to create stunningly intricate designs. Yobura Nigerians also pioneered the technique of starch resist patterning, drawing designs featuring lizards, birds or landmarks in starch paste to fabric before dyeing it. Stripweaving, where strips of indigo and white fabric are stitched together developed in Kong, an area in the present-day Ivory Coast, resulting in fine fabrics that were much-prized and worn by the King and members of court. Stitch-resist fabrics were prominent in Mali and southwest Nigeria, with areas of stitching added to folded and pleated fabric before it is dyed, and later removed after dyeing, to produce dazzling geometric patterns. 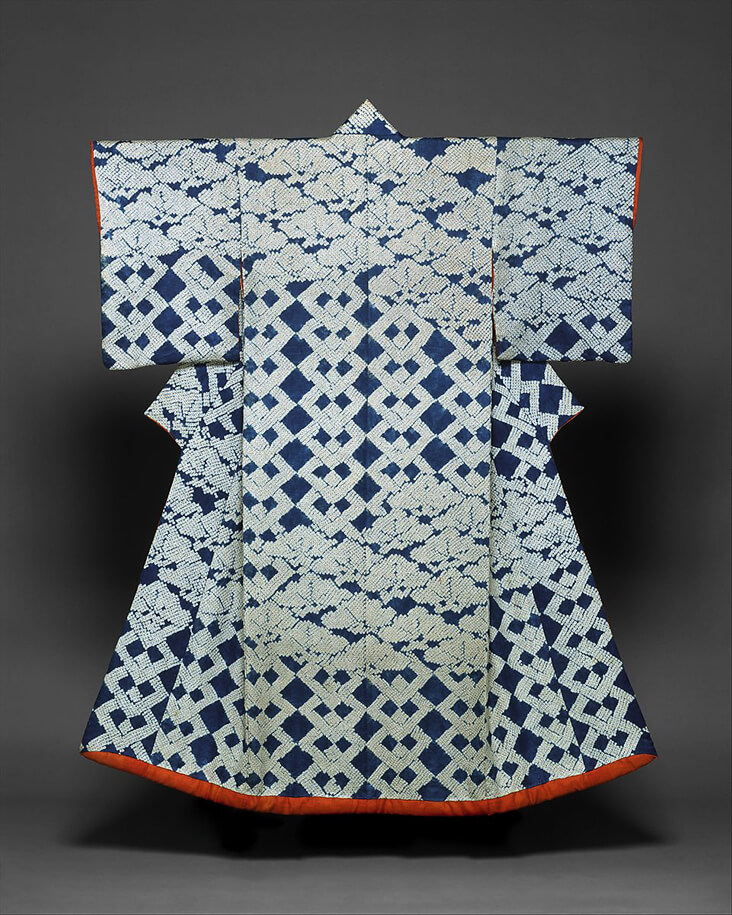 Kosode with Design of Pines and Interlocking Squares, second half of the 18th century, image via the Met Museum, New York

Indigo was introduced to Japan from India through the Silk Road route during the 6th and 7th centuries and became ingrained into their culture, known under the name ‘aizome.’ Rare and highly prized, indigo fabric was reserved only for aristocrats and Samurai soldiers, who wore it under their armour for its antibacterial powers to stop wounds from being infected. From the 17th century onwards Japan became one of the world’s leading indigo manufacturers and the indigo blue fabric so ubiquitous across the nation, colouring everything from bedding and tablecloths to threads and clothing in stunningly detailed designs that a visiting British scholar from the 19th century even labelled it “Japan blue.” At its peak the country held over 1,800 indigo farms, only four of which still survive today, including the Tokushima Prefecture on Island of Shikoku which dates back to 12th century.

But in China, the true history of indigo can be traced back even farther, to the Qin and Han Dynasties of 221 – 220 B.C., where the dye was extracted not just from the indigofera tinctoria but also the strobilanthes cusia, polygonum tinctorum and isatis tinctorial – all these indigo dye bearing plants are still commonly referred to today as Lan Cao, or ‘blue plants.’ Chinese indigo fabrics of the ancient era were defined by blue-on-white, or white-on-blue designs featuring plants, mythical animals and characters arranged into harmonious stories aimed at blessing their wearer with peace and happiness, a fitting tribute to this most covetable and fascinating of colours.