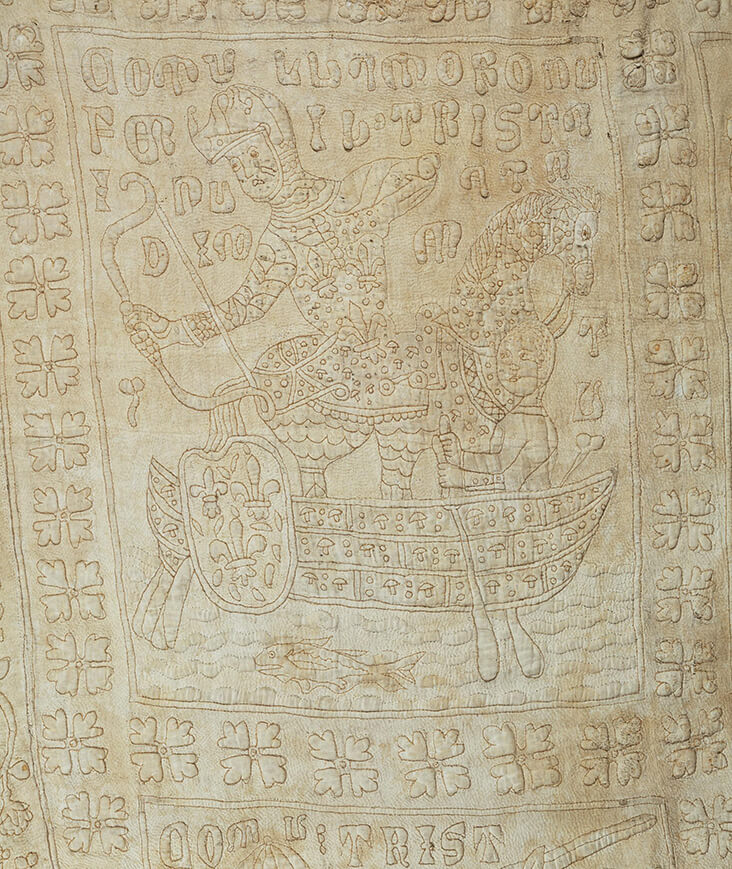 Detail from The Tristan Quilt, made in the 14th century, from the V&A Museum, London

Made with dedication, patience and love, traditional quilts have been passed on through families for thousands of years. Many still survive today, proving how durable the hand-crafted technique continues to be. This deep-rooted longevity might explain why quilting has remained such a popular and enduring habit, one that can still invoke the enveloping comfort and tradition of the past. Now held in museums and galleries around the world, early quilts also offer a fascinating insight into our human history, revealing domestic, cultural and sartorial habits through the ages.

In its earliest days, quilting was purely practical, allowing comforting warmth in bedding and clothing. Though they no longer survive today, it is likely that quilts existed as far back as ancient Egypt; an ivory carving from the temple of Osiris at Abydos featured king of the Egyptian Dynasty wearing a quilted cloak made from stitched together, padded layers. In 1924 archaeologists also discovered a quilted floor covering in Mongolia which astonishingly dated from as far back as 200 A.D. It is likely that the word ‘quilt’ was first used sometime later in 13th century England; evolving from the Latin word ‘culcita’, meaning stuffed sack, the term referenced the process of filling two fabric layers with insulation. 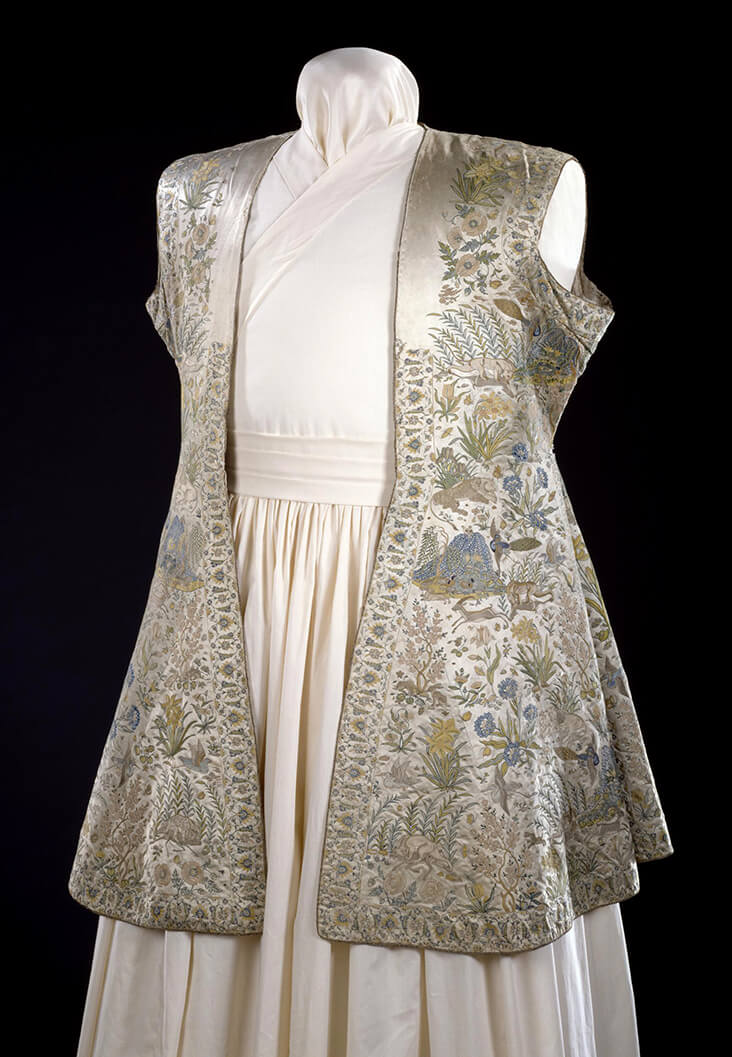 As hand-sewing techniques became more sophisticated and complex, so too did creative attitudes towards pattern – by medieval times the designs adorning quilts had become increasingly complex and adventurous. Sample quilts have survived from the 12th century and beyond in Europe, India and the Far East, predominantly taking the form of bed covers containing rich patterns or telling the exotic tales of love and danger which were popular in medieval times. The Italian Tristan Quilt, made in the 14th century is one of the oldest surviving quilts in the world and reveals this trend towards storytelling in quilts that has persisted through the ages, illustrating the adventures of the medieval characters Tristan and Isolde. Given its warmth and durability, quilting unsurprisingly appeared in many garments of the medieval period. In Europe, Crusaders of the 12th century wore a quilted garment under armour, or as a comfortable, cheaper substitute to the full metal outfit, which later evolved into the fashionable doublet in the following centuries.

In medieval times and beyond quilts were highly prized items that were passed from one generation to the next, so valuable that they often became dowries for women getting married. Making quilts by hand without a sewing machine was a time consuming act, so it makes sense that many were made by large family groups, particularly women, who gathered together to share the tradition down the generational line and to enjoy each other’s company. Complex stitching techniques had to pull all layers of the quilt together, and were given distinctive names to help remember them including ‘Broken Plaid’, ‘Hanging Diamond’, ‘Twisted Rope,’ and ‘True Lover’s Knot.’ 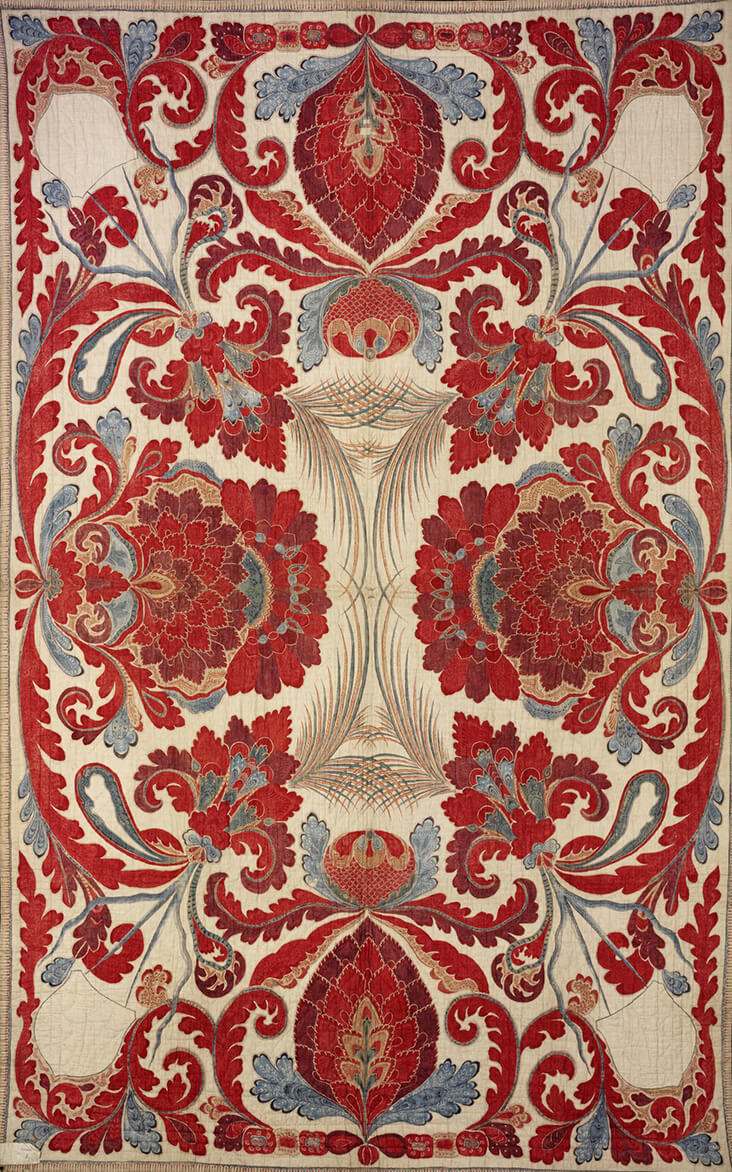 Indian Quilt made in the popular chintz fabric for a European market, from the V&A Museum, London

Some of the finest quilted blankets and garments of the 17th century came from India, made from painted or dyed cotton, or in the fabulously complex chintz fabric which dazzled European audiences and became a much-prized commodity. The V&A Museum’s Indian hunting coat is a prime example of the finery in Indian quilting, made using the highly specialised ‘tambour’ chain stitch to produce an intricately curling floral pattern that holds together the padded quilting, dating from around 1620. 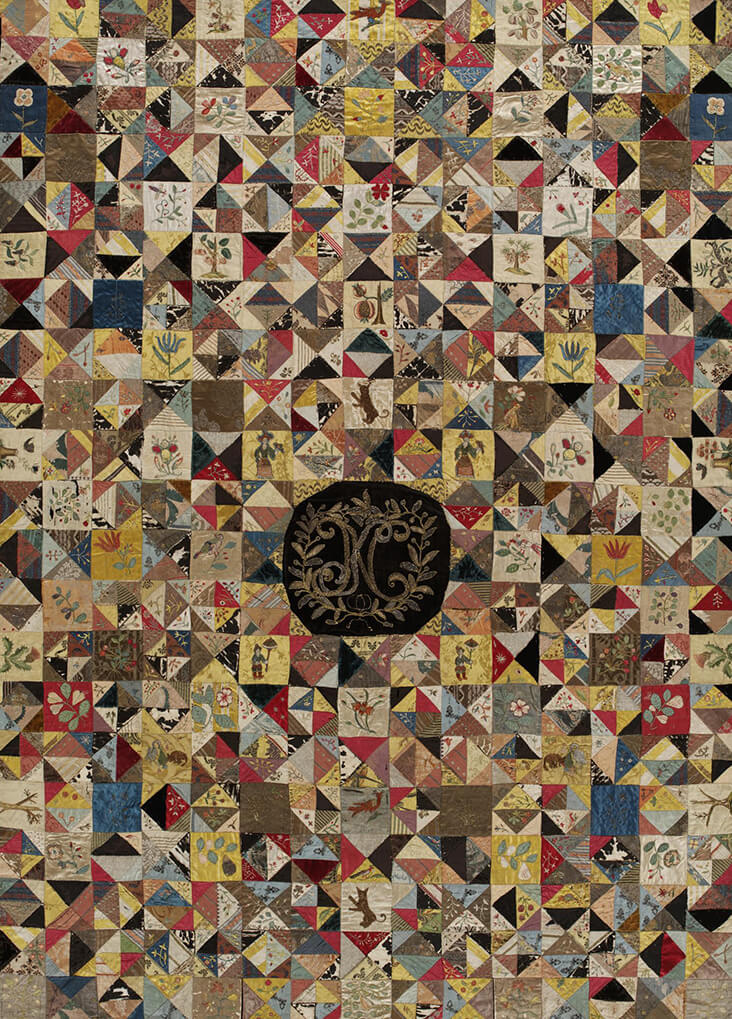 Throughout the 18th and 19th centuries quilting practices expanded throughout Britain and reached an all-time high. Both professional tailors and private makers produced some of the finest examples of quilting in the world, many of which still survive in museum collections today. The British textile industry was booming, offering a wide variety of colours, patterns and prints to work with, which allowed the creation of stunning applique or patchwork designs, sometimes telling detailed stories, or unraveling as Indian or Arabian geometric patterns. Patchwork quilting was a popular practice which allowed thrifty makers to use up scraps of old clothing, or to produce comforting, symbolic mementoes for brides or mothers to be. This mend-and-make-do attitude was carried from Britain and other countries across Europe to the United States in the 19th century, where makers produced stunning, iconic quilts filled with richly intricate patterns and stories that are now deeply woven into American history.