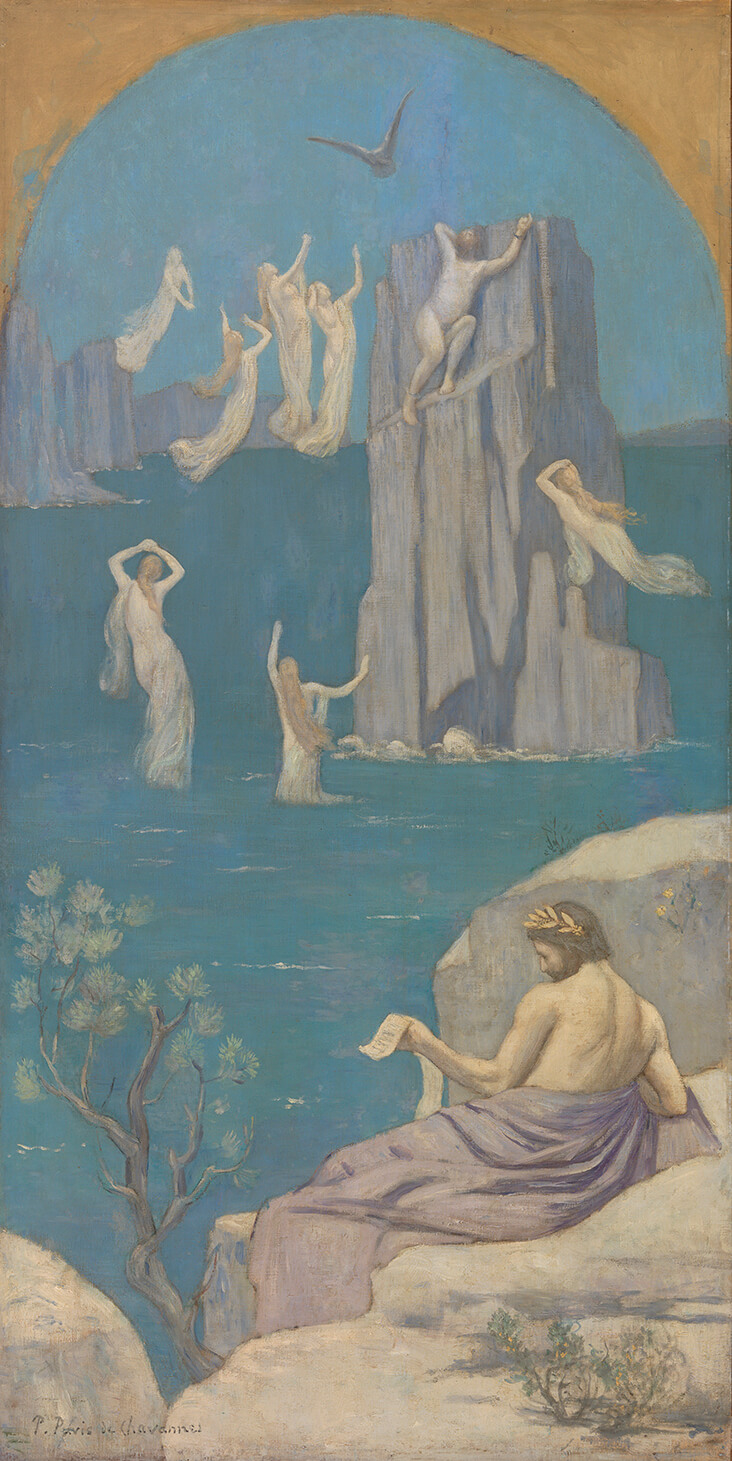 The misty turquoise of BLUE HEAVEN Linen defined the art of 19th century French Symbolist Pierre Puvis de Chavannes, forming distant mountains, hazy shadows or endlessly entrancing blue water. When France was facing political turmoil after the Franco-Prussian War, Puvis’ mystical, icy blue scenes suggested a wondrous, escapist world beyond our own to disappear into. His pared back colour schemes and clean, pure lines are the essence of sophisticated refinement, for which he argues, “the simplest conception proves to be the most beautiful.” 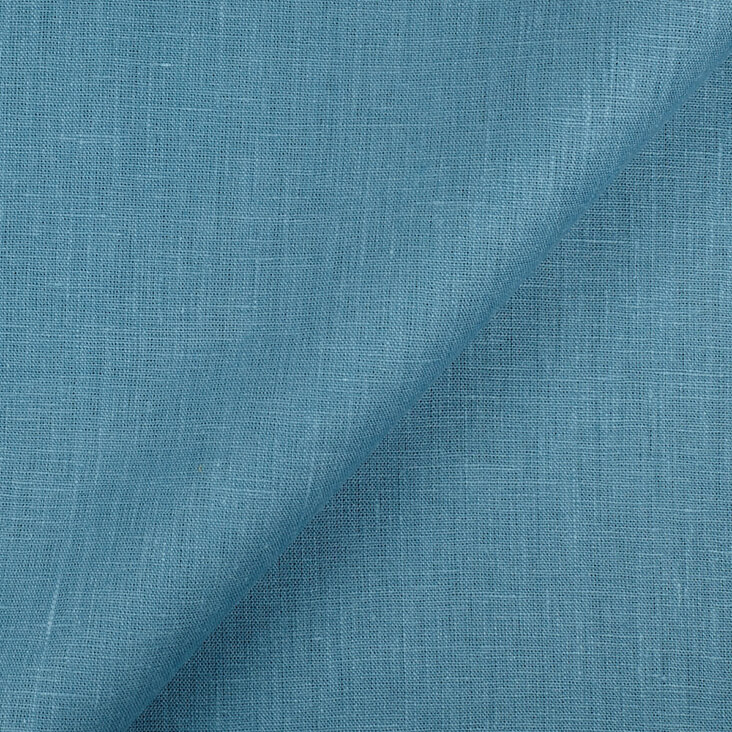 Born under the name Pierre-Cecile Puvis in 1824, the artist was the youngest of four children. His father was a mining engineer and it was expected that Puvis would follow in his father’s footsteps, but it was not to be; illness prevented Puvis from taking the entrance exams for the Ecole Polytechnique in the 1840s. Instead he took on various short art courses in Italy and Paris throughout the 1840s, learning anatomy, perspective and contouring from the old masters, but much of his artistic skill was self-taught, or learned from his lively circle of artistic friends in Paris.

Success came later to Puvis than many of his contemporaries, but by the 1860s he had found widespread recognition for his complex, figurative scenes filled with emotive drama. War, 1861, was made as part of a series of four paintings representing core aspects of human life: Peace, War, Work and Rest. In this quietly brewing scene, barren, dusty tones suggest a wild and inhospitable place, but in the centre crumpled drapes in a rich denim blue stand out, rippling over dazzlingly white female flesh with the crisp freshness of running water. 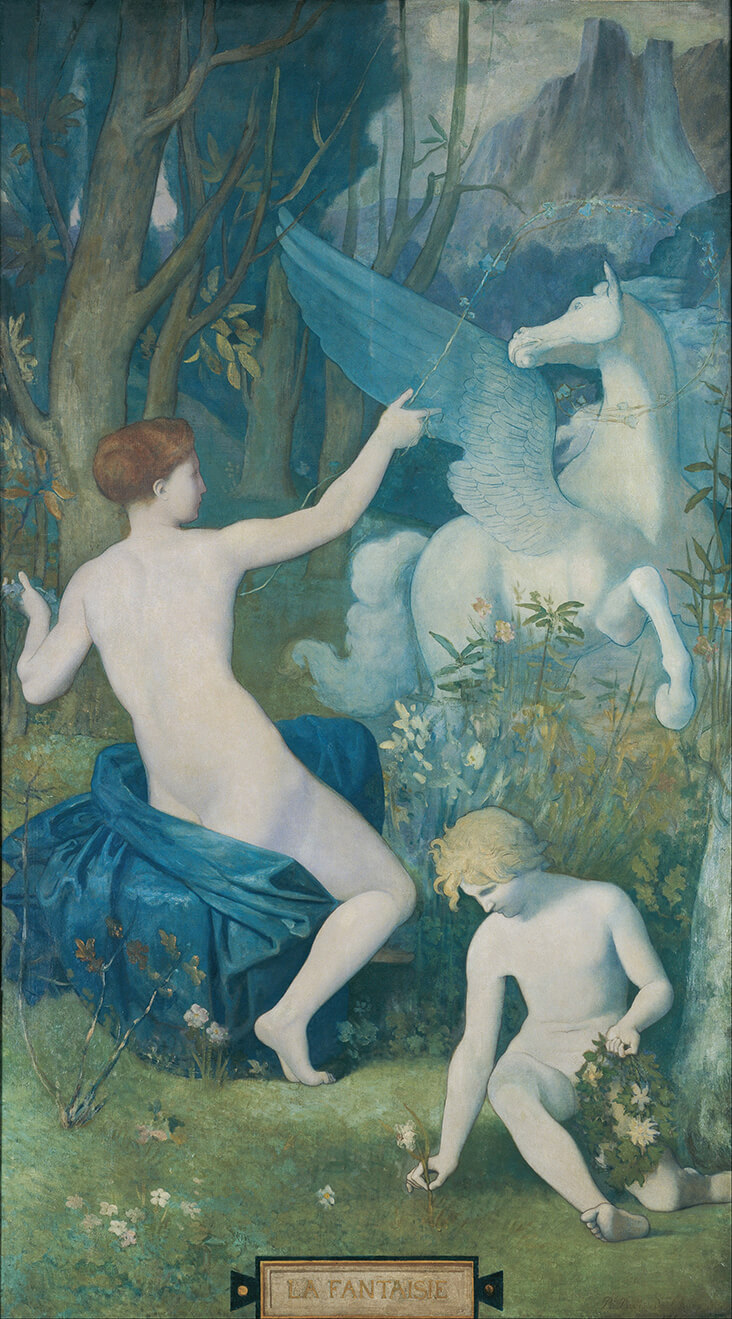 By the late 1860’s this same blue came to flood all Puvis’ paintings, filling them with the mystical light of an early morning dream. Classical, wistful figures wearing long, flowing drapes wander aimlessly through these scenes as if lost in their own thoughts, idly picking grasses, dancing or playing music. Sometimes they are accompanied by winged angels, heavenly cherubs or a flying Pegasus, as seen in the mystical and otherworldly Fantasy, 1868. A flying horse rears upwards to avoid being lassoed by the faerie queen’s slim vine, dipping its wings into aqua blue shadow. This same green-tinged blue is echoed in the damp, darkening grasses surrounding a dazzlingly white angelic boy in the foreground while he carelessly forms a floral wreath.

In Marseilles, Gateway to the Orient, 1868, Puvis explores a much looser, freer language of painting, working en plein air to capture the fluttering life of a real scene in line with the fashionable Impressionist style. But his experimentation with flattened, textured patches of colour and the elimination of detail was a radical new appraoch to painting, predicting the abstracted Post-Impressionist art of Paul Gauguin and Vincent van Gogh yet to come. A flat shard of deep aqua blue dominates the entire scene, worn down in patches with the weathered patina of ancient, sea lashed rocks, while ananymous, faceless figures are patches of fleeting colour and light.

Sacred Grove, Beloved of the Arts and the Muses / 1884/89 / Potter Palmer Collection

Completed over 20 years later, Puvis’ Sacred Grove, Beloved of the Arts and the Muses, 1884/89, returns to the careful precision and quiet, cerebral tranquillity of earlier works. Motionless figures are poised with the timeless grace and sculptural solidity of classical statues, while loose drapes in pastel tones flow carefully over their ghostly white bodies. Beyond them still water becomes a mirror of the palest golden light, reflecting dark trees and icy mountains along the undulating horizon with an entrancingly deep, dark turquoise.