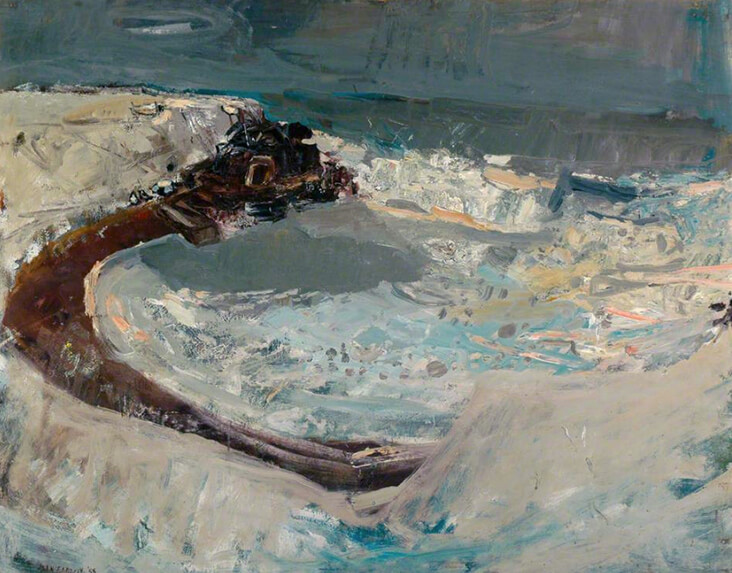 The silvery grey-blue of LAGOON linen became leaden, steely skies in the hands of painter Joan Eardley, capturing the furious energy of storm-laden seascapes in thick slabs, swipes and streaks of moody colour. A master in capturing the wild, elemental and unspoilt beauty of the Scottish coastline, Eardley heaved huge canvases into the landscape during the worst storms, when she could battle against the mightiest forces of nature. Angry, weather-beaten shades, textures and surfaces emerged from the wreckage, like survivors of a great, earth-shattering event. 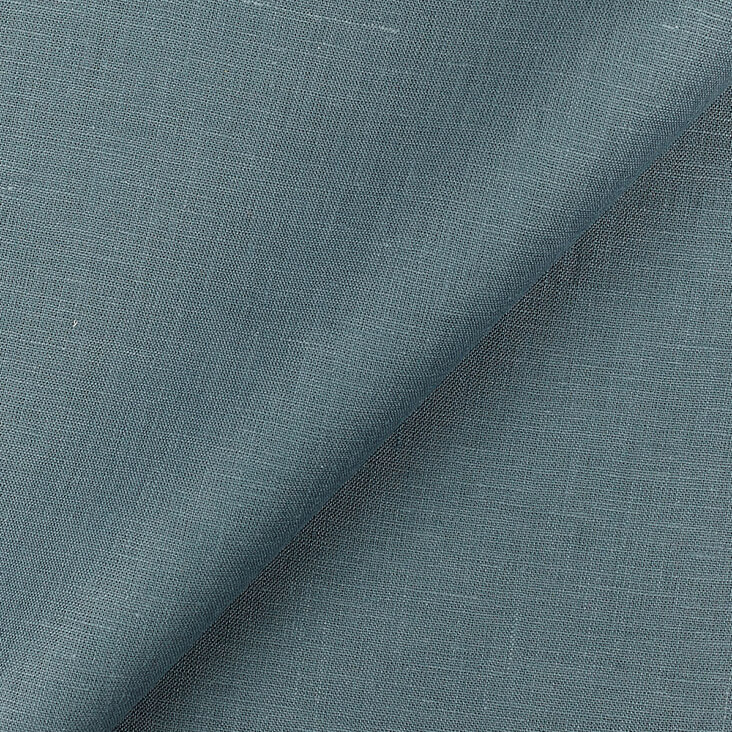 Originally born in Sussex, England in 1921, Eardley’s family moved to the Bearsden area of Glasgow in 1940. In the same year, Eardley began studying at Glasgow School of Art, where she quickly became a standout student, receiving several awards and prizes. During a Postgraduate period of study at Hospitalfield House in Arbroath, Eardley first began a love affair with coastal life, making regular trips to the Arbroath Harbour to sketch the clanging, rusty boats swaying in the murky Scottish sea.

Following a spell of travelling around Italy and France, Eardley returned to Scotland with a renewed passion for the rugged simplicity of ordinary life. In the late 1940s she moved to a rundown, war-torn area of Glasgow, where she began sketching and painting the local tenement children who wandered the streets alone, conveying their brave resilience with raw sensitivity. In the 1950s Eardley first visited the small fishing town of Catterline in the Aberdeenshire area of Scotland, and fell in love with its untouched, tumbling coastlines, which opened out in wide expanses across the horizon. For Eardley they were a welcome escape from the gritty, urban cityscapes of Glasgow and she returned regularly on painting trips, staying in a friend’s house until she had enough money to buy her own second home there. 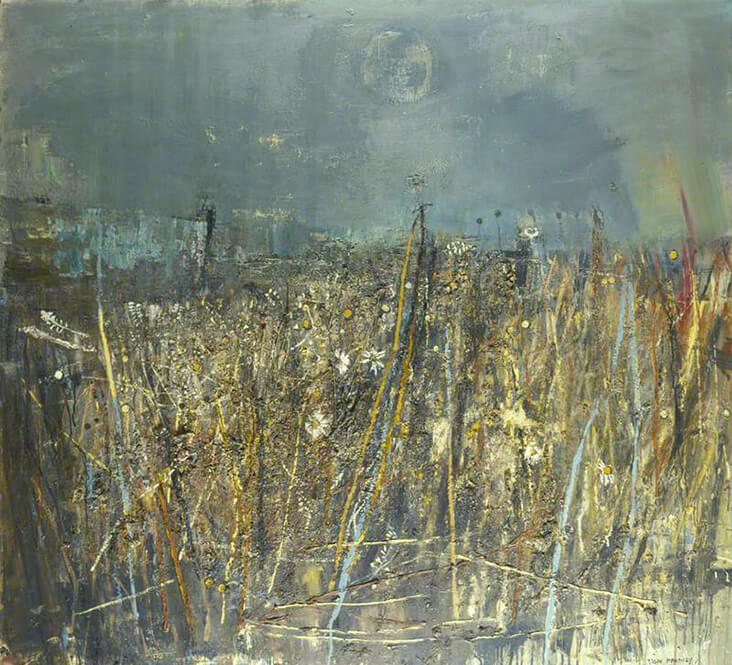 Her canvases grew wilder and more expressive as she developed her signature style; textural tangles of aggressive, scratched and scumbled paint that absorbed the all-consuming essence of the landscape around her. The sea was her favourite subject, and she would watch weather reports from Glasgow, waiting until it was particularly wild before venturing north with her boards and brushes. In Sea and Snow, 1958, the tumultuous energy of a winter sea thrashes across the scene, forming foamy white froth against sea-green shades of grey in the shadowy water and sky, veering irresistibly close to abstraction. 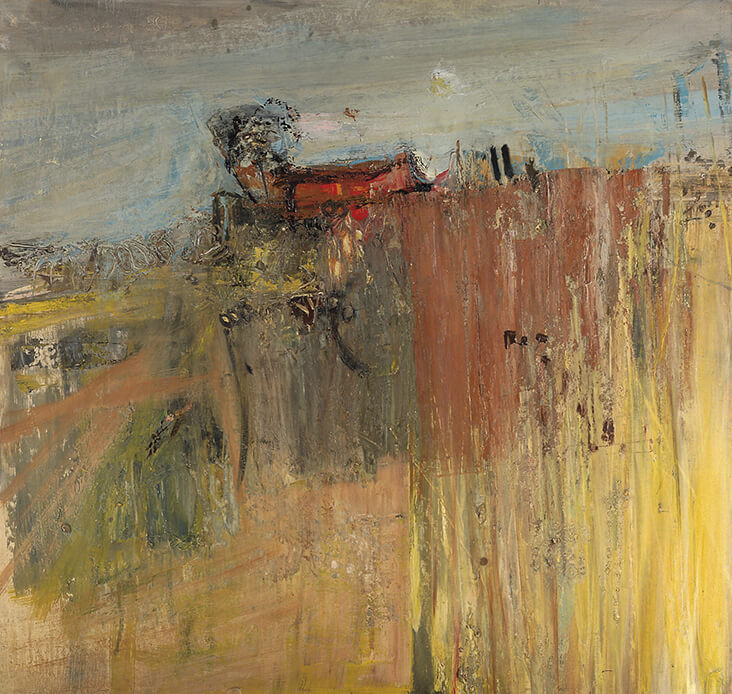 Eardley also went exploring in the surrounding fields, tramping through muddy paths and waist high thickets of wet grass to find new source material. Influenced by Claude Monet’s simple fieldscapes, she made painterly depictions of the desolate places she discovered, as seen in the richly textured Seeded Grasses and Daisies, September, 1960. Here she captures the leaden, brooding Scottish sky with a silvery blue, green-tinged tone that hovers with salty sea air, shimmering like a mirror in the light. In the deliciously textured, golden toned passages below, real daisies, grasses and weeds are embedded into the impasto surface, mingling with pale strands of yellow and white that weave in and out of the light. 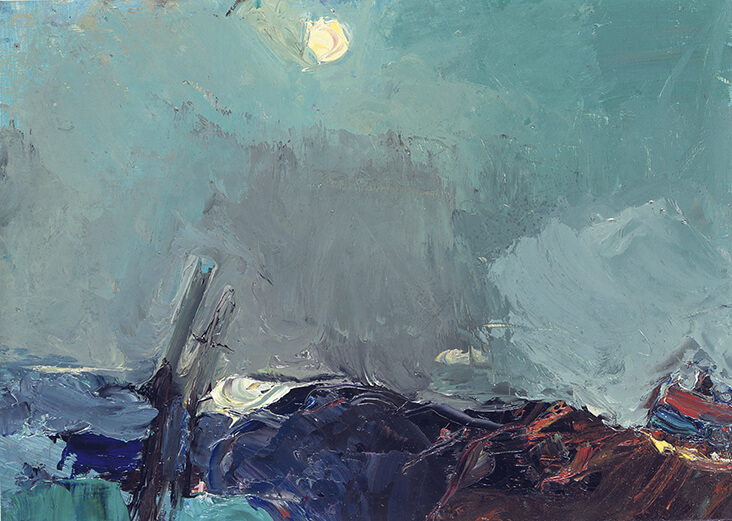 In Catterline Landscape, 1960, the same moody, metallic sky hovers overhead in expressive, horizontal streaks, threatening to burst into a storm. Flashes of brilliant colour pop out below, as yellow wheat burns into a white blaze, complimenting embers of dazzling crimson red in the centre. The later, smaller oil on board study Sea and Sky, 1961 is almost all cloudy, moody sky, as a patchwork of steely, grey-blue and aqua turquoise tones brush against one another, shimmering in the light of the white-hot sun. Abstract patches of warm and cool colours flow with aqueous movement below, just suggesting a link to the grounded, real world, but giving little away.