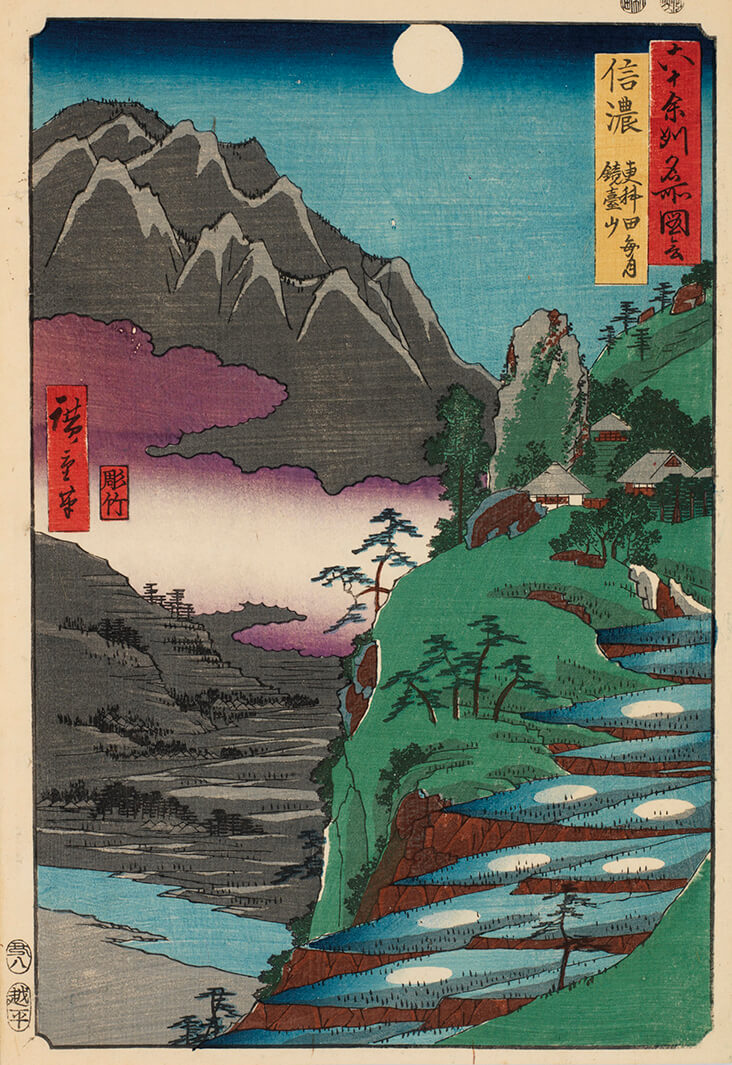 Master of understated elegance, Japanese printmaker Ando Hiroshige’s dreamy, wistful landscapes are filled with the sleek and refined grey of GRAPHITE Linen. In his quietly pensive scenes rich, warm grey tones become the solid mass of enduring trees, craggy rocks and distant mountains, iconic emblems that are built to last. Around them shards of red, green and blue dance with the spectral lucidity of electric light, suggesting the passing fragility of people, seasons and time flitting all around them.

Hiroshige was one of the last great woodblock practitioners to emerge from mid-19th century Japan. As a young man he was drawn to sketching, but when both his mother and father died he was forced to take on his father’s role as warden of the fire brigade. By 1811 his inclinations towards art had spilled over, leading the young Hiroshige to train with the master printmaker Utagawa Toyohiro. It was here that Hiroshige learned a distinctly refined approach to woodblock imagery that would remain with him for life. From 1811 to 1830 Hiroshige’s prints followed the fashionable ukiyo-e tradition, conveying pictures from the ‘floating world’ of Japan, or the everyday playground of the wealthy merchant class, with subjects varying from beautiful girls to actors and samurai warriors. 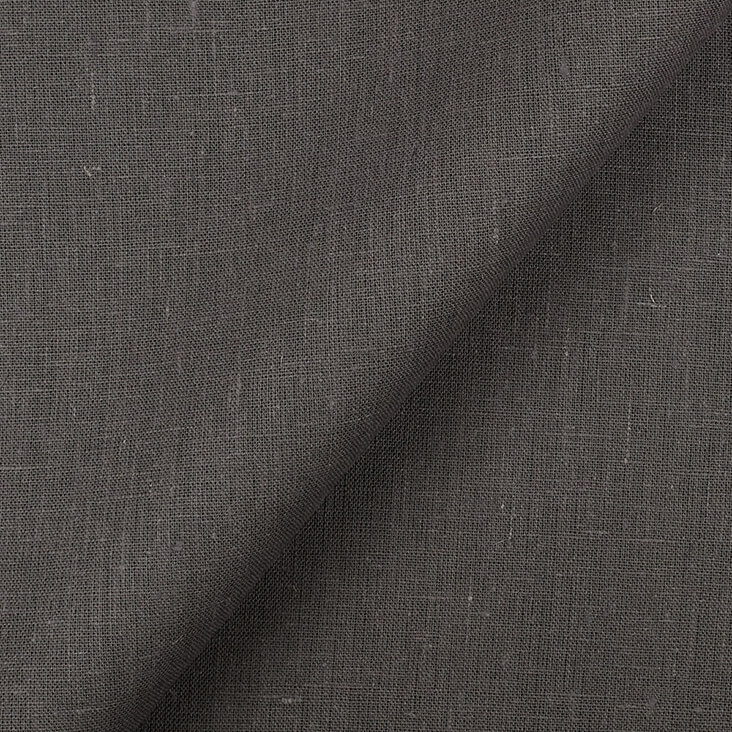 In around 1830 that Hokusai broke away from his teachers and moved into his signature landscape style, conveying a romantic Japanese wilderness loosely based on reality, yet tinged with impending danger and melancholia. Some featured birds, flowers or figures, but his ability to convey the sublime strength of the Japanese landscape as an enduring backdrop quickly earned him a wide following. Hiroshige had a major breakthrough with his series Fifty-Three Stations of the Tokaido Road, made between 1847 and 1852. Before beginning the series, Hiroshige travelled through 53 stations along the Japanese road, making sketches and mental notes along the way. He then produced a suite of 55 woodcuts depicting each station along with the beginning of the highway and the arrival in Kyoto. In his portrayal of the 16th station Hiroshige captures angry, sharp cliffs in sombre tones of grey which cut apart to reveal an iridescent blue sea beyond. 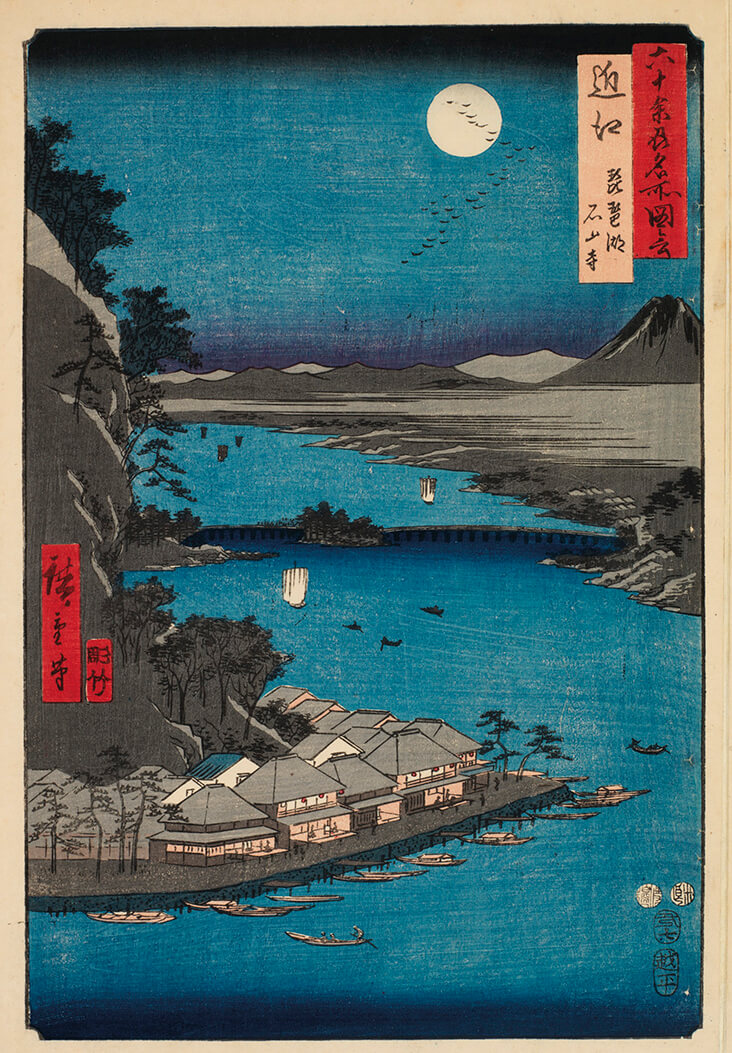 Hiroshige produced his iconic Famous Views of the Sixty-odd Provinces (Rokujuyoshu meisho zue) between 1853 and 1856, creating an impressive sixty-nine woodblock prints, each capturing the unique character of Japan’s individual provinces. Radical approaches to composition and colour emerged in this series; vertical formats and a high viewpoint allowed Hiroshige to create greater depth of field between background and foreground, while perilously steep, mountainous cliffs in hard, metallic greys convey heavy permanence against the light, weightlessly ephemeral forces of air and water. 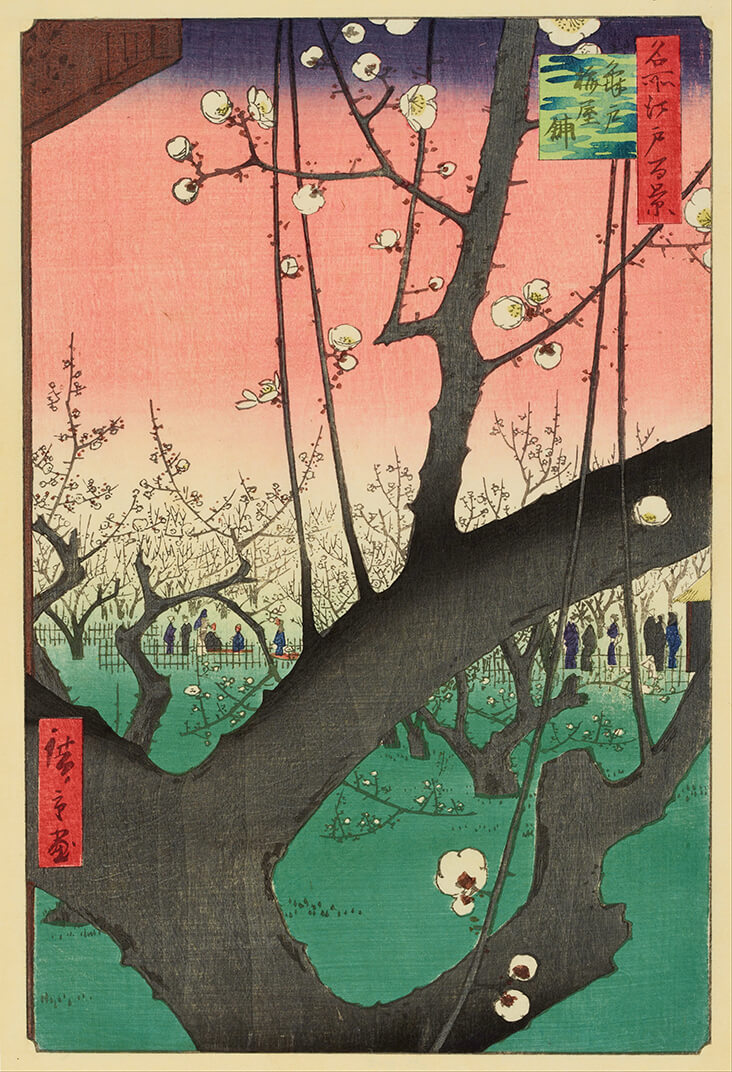 In Plum Garden, Kameido, 1857, traditional Japanese bokashi shading stains a pink tinge across the morning sky, while delicately blooming, white cherry blossoms suggest the transient emergence of spring. Distant figures dressed in blue are an indistinct blur of energy and light, bustling back and forth with the same lucid fragility as the changeable sky. But in the foreground the tree’s richly textured, damp grey silhouette is as permanent as stone, stretching jagged, angular limbs across the foreground that speak of muscular strength, endurance and stability across the seasons and years. 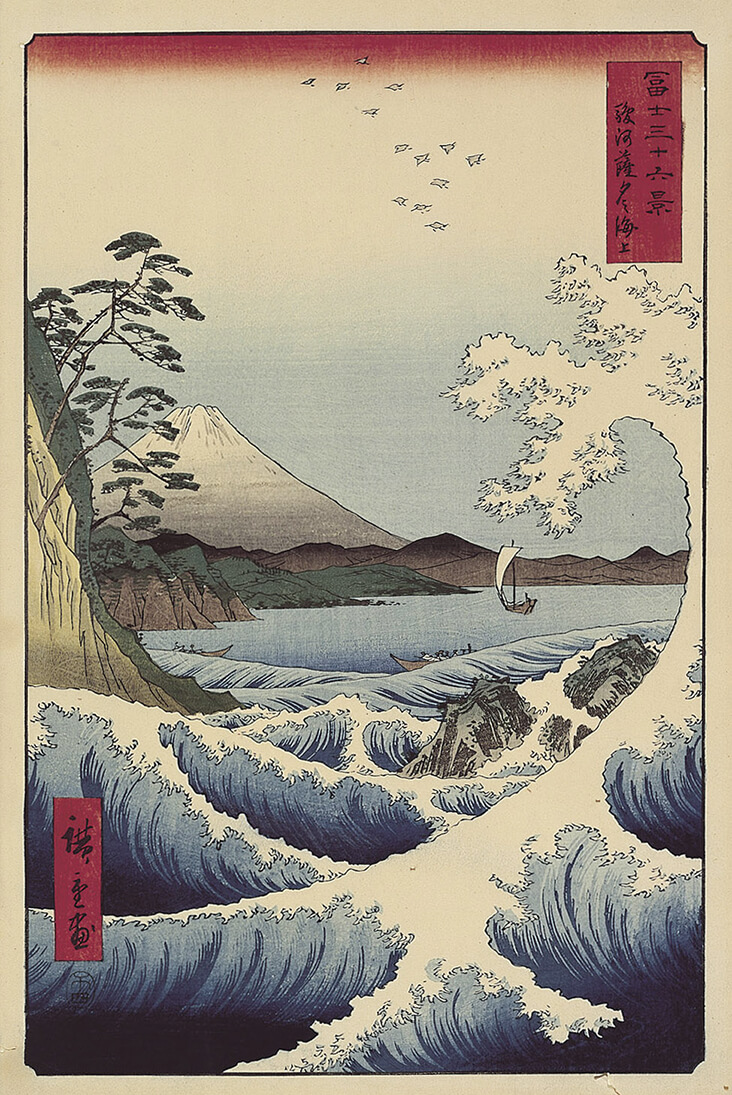 The Sea Off Satta in Suruga Province, 1859

The same balance between fragility and permanence is played with, in the later woodblock print The Sea Off Satta in Suruga Province, 1859, as a choppy, animated sea forms icy white froth that swishes back and forth and swoops into the sky like a menacing claw. This time the solid, enduring grey is pushed far into the background, forming low lying metallic mountains that undulate across the horizon and speak of history and memory, lending the entire image a weighty, comforting solidity.