The next of our artisan embroiderers is Aimee Betts, who describes herself as a “˜Creator of Adornments’. Aimee combines more modern processes, such as industrial sewing and digital embroidery with the more traditional hand-sewn approach to create contemporary embellishment pieces. Her work spans fashion, interior design and visual art and includes modern crafted accessories, jewelry, home wares and objects. She says she is somewhat discontent with ready-made materials and so her main enterprise is to alter the appearance and structure of the material at every stage of production. This means the resulting adornment has been through many design processes and often has many layers of craft within it. 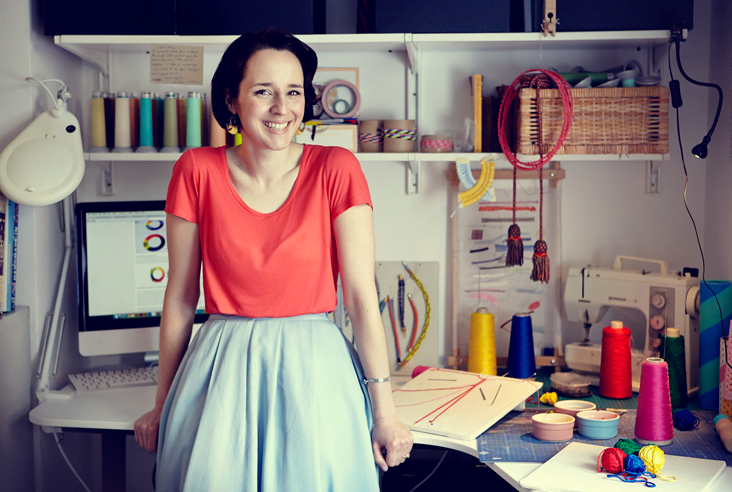 After graduating from Royal College of Art in 2010 with an MA in Mixed Media Textiles, Aimee went to Gujurat for a design residency. Her aim was to be exposed to as much embroidery as possible, and she discovered so many regional styles of embroidery across India. She says “œI’ve noticed that lots of cultures use the same stitches and techniques; they just interpret them differently because they’re using the materials and colors that they’re surrounded by… all of the cultural references are completely different, so whilst everyone could still be doing very similar techniques, they’re just doing them in their own way”. Aimee finds this to be one of the best parts of her practice – textiles takes her to places she probably would not have gone otherwise and allows her to discover new things and take her on new journeys, which she then translates into her work.

One thing that is so evident and unique about Aimee’s solo work is this culture, history and context behind the adornments. She recently produced a collection of Braided Batons, inspired by “œcarved Indian mace heads & Italian sword grips on display at the Wallace Collection, London”. Here, Aimee combines her braiding & stitch techniques to create fresh, bright, modern objects inspired by a more menacing history. Her collection of Ceremonial Tassels are drawn from British Military Dress Uniform seen at Gieves & Hawkes, worn to communicate rank & authority during traditional ceremonial events. The tassels are “œan exaggerated & abstract interpretation of military embellishment, re-appropriating techniques such as cord work embroidery & re-working the characteristics of rope aiguillettes & ceremonial headdress”. Here, she explores how adornments are worn to elevate the wearer to a high-ranking position and display pomp and power.

A similar concept is seen in her work that crosses over from adornments into art – The Adorned Woman collection. The collection is inspired by Iron Age golden torcs as seen at The British Museum. “˜Copper Rope’ is a piece that most physically referential to the torcs & is a celebration of the bold characteristics of the original objects. Here rope is “œre-appropriated by dismissing its perceived functional qualities & transforming it into an object that is both abundant & frivolous”. The specialist copper threads used have been treated with chemicals to allow a radical change in the color, and have then been stitched onto large wooden beads and combined with thick sailor’s rope to create an adornment that is changeable & playful. The result is a piece that is wearable art, and would look as much at home in a gallery as it would decorating a person.

Aimee’s work is all about the application of embroidery, and she finds that “œcollaboration can be a way to effectively extend your ideas”. Much of her more recent work has been in collaboration with fashion houses, jewelry makers and other artisan crafters, creating much more functional pieces, in order to bring embroidery to the forefront of contemporary design practice.’  Aimee recently collaborated with Parisian company Ilado on a collection of vibrant, braided Bola bracelets. The Bola is a chiming pendant traditionally worn in Mexico to bring well-being and protection to the mothers-to-be and their baby. The bracelet is designed to be worn by mother and child and the knotting style is reminiscent of a traditional friendship bracelet – by referencing this Aimee wanted to “œreinterpret the bond between mother & child”.

Aimee has also collaborated with framers and art conservationists John Jones, creating a color wheel mirror, using her circular knitting machine to make an ombre blend textile cord. This juxtaposition of cold, hard and functional materials with Aimee’s vibrant embroidery can also be seen in her collaboration with glassblower Michael Ruh, where the simple glass form of a light is complimented by her textiles in The Harbour Light. This concept extends to some of her more abstract textile work as well, where she secures beetle wings and fine metal threads to finely knitted surfaces, again creating pieces that are more art than something functional.

Aimee working on’ the ombre braid for the mirror collaboration with John Jones. Photo: John Jones

Projects like this are what keeps Aimee inspired -‘  because she is learning new techniques all the time, she says she will think of something and immediately want to try it. Even if it’s unsuccessful, she says you will always learn why it’s bad or why it’s good so the time and piece is never wasted. She does find that some of the work reviews she has are “œreally tough”, but she appreciates people being honest with her or otherwise you can’t learn, you’re just “œkidding yourself”.

Aimee says she has a big sense of intrigue and “œthirst for knowledge” – embroidery is very portable so it means she can take it anywhere and work in lots of different places. However, one of the things that is most important to her is to “œmaintain the tradition of embroidery in the UK; a lot [of work] goes abroad to India and China and being able to have some level of production in the UK is really important”.’  Aimee’s working hard to achieve this, inspiring the next generation of embroiders with her work at schools – she is a Specialist Stitch Technician at Chelsea College of Art & Design, and is a visiting tutor on the BA Textile Design course at Arts University Bournemouth.

Bringing embroidery to centre stage is what’s ultimately most important to Aimee, she doesn’t want it to “œjust be a “˜women’s craft’ or to be undermined and understated”, she wants it to be more acknowledged. She’s very aware of the accessibility of some of her work and art in general as embroidery is so expensive. Aimee is now trying to develop a range of cuff designs, similar to her Broderie Cuffs and Spikey Bracelets that are more affordable, something that will definitely help bring her art and embroidery to the forefront of design.