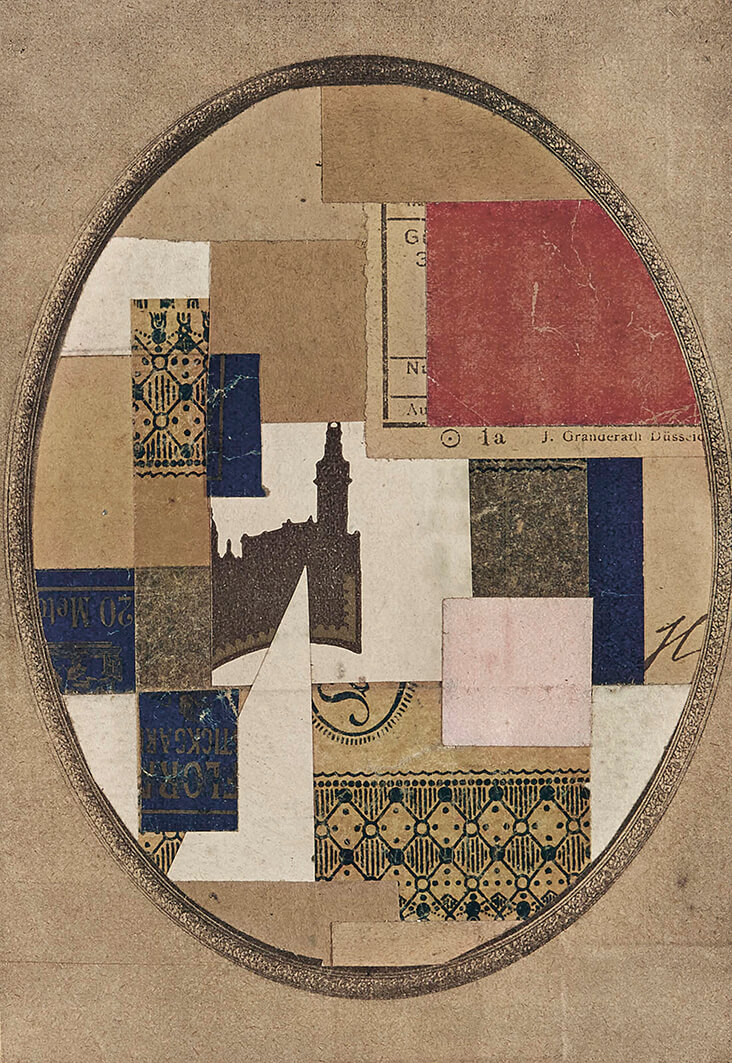 Torn scraps of everyday life, from old bus tickets to old newspaper pages take on a strange and spiritual magic in the hands of the great Dada collagist Kurt Schwitters, who refashioned them into richly textural, densely layered collages. His art merged quotidian existence with a higher realm, proving even the most mundane of objects can be elevated into something quite extraordinary. Schwitters had a particular fascination in buff shades of off-white, beige and caramel alike MARZIPAN Linen, because these were the appealingly humane colours of stained newsprint, drawing paper and old books, the tones he held in his hand, read from, and carried with him every day. By relying on these warm hues, Schwitters invested in his art a deeply humane warmth, one that is as appealingly tactile today as it was almost 100 years ago. 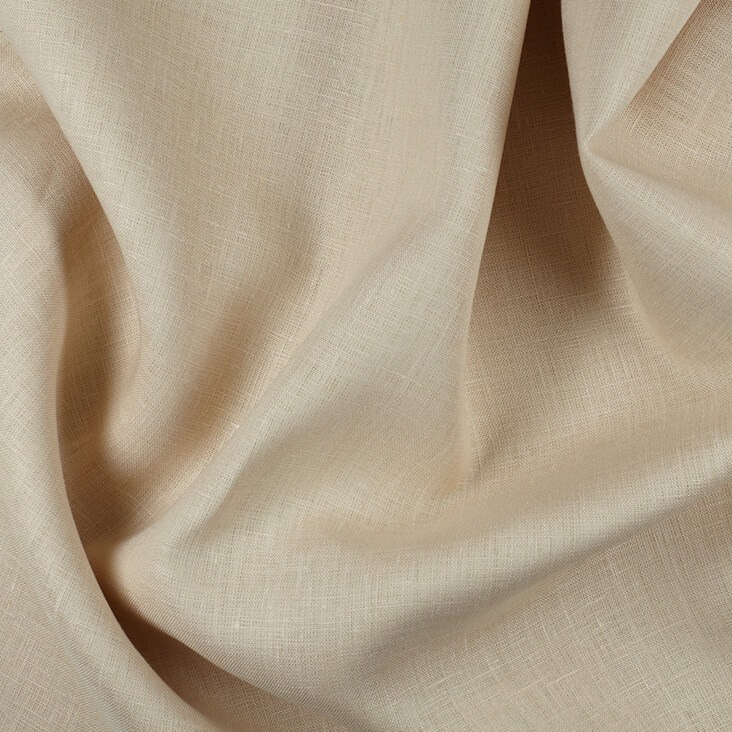 Schwitters was born in Hanover, Germany in 1887, and studied drawing at the Dresden Academy from 1905-1915. His art training was highly academic, and he became a technical draftsman as a young graduate. In 1918, Schwitters made a dramatic about turn when he began making collages from scraps of litter, which he found lying around in the city streets. As his ideas expanded, Schwitters became increasingly preoccupied with the way dissonant fragments could jar and jangle alongside one another and create something entirely new and unexpected. He even took this notion a stage further, arguing that it was the unifying role of art to take the broken fragments of society and piece them back together again into a spiritual new whole. His ideas chimed with many avant-garde artists working in post-war Germany, and he gradually integrated himself with a group of likeminded artists associated with Dada.

In MZ 491, 1922-25, Schwitters creates a dissonant collage out of seemingly unrelated scraps of paper cut into geometric shapes, layering them over one another to create a rich patchwork design. The oval frame resembles that of an old mirror, but instead of reflecting back the real world, Schwitters instead shows us something shattered and incoherent, reflecting the unstable times in which he was living. Yet his new reality here is a richly appealing blend of caramel and cream tones, the warm and humane. This colour palette is offset against cold and mechanical blocks of red and blue, perhaps a battle between man vs. machine. 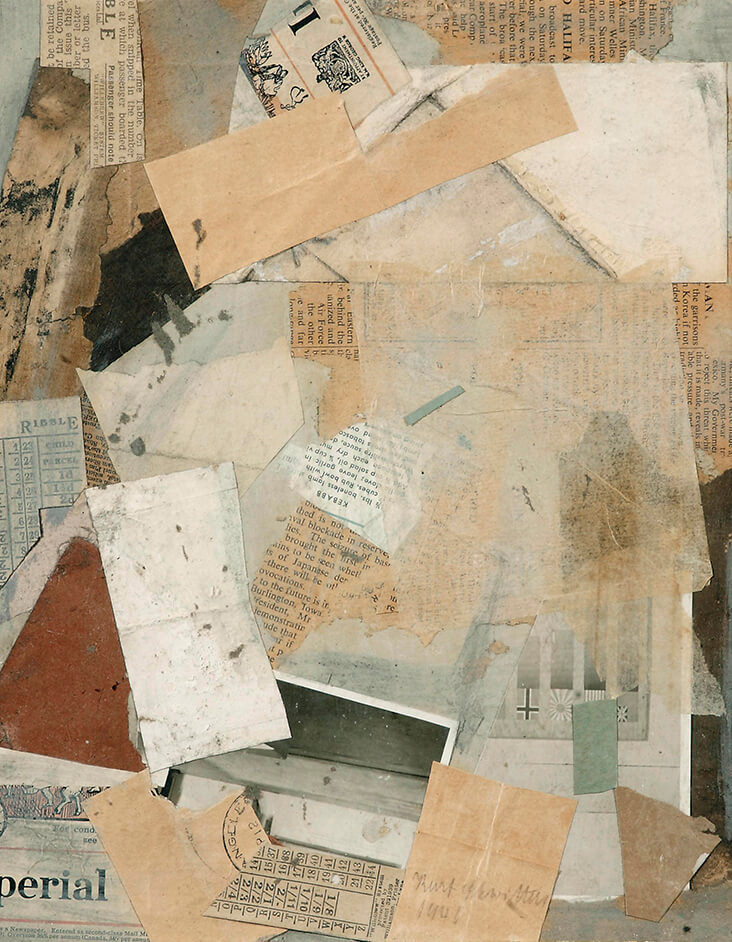 As his career progressed, Schwitters’ art became increasingly complex, layered and chaotic, incorporating a greater range of materials including torn newspapers with old photographs, book pages, paper doilies, bus tickets, and church pamphlets. He also began exploring how torn edges could sit alongside neatly cut ones, and transparent sheaths of paper could be layered over dense patterns to veil and obscure them. In Untitled (perial), 1945-47, Schwitters layers together a blend of neutral cream and camel hues with stark panels or streaks of black and white. He leaves broken elements of text just visible enough to create a visual white noise that fizzes up with frenetic energy. On the right, an upturned Biblical cross is just visible, a reminder of the spiritual hope that still had the potential to hold society together in some way. 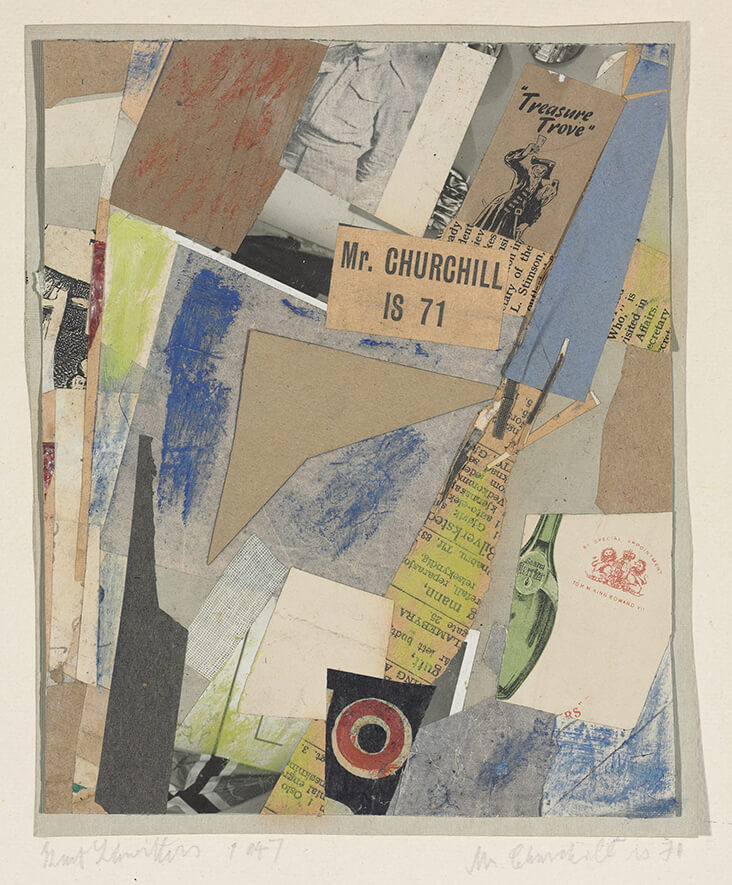 In Mr Churchill is 71, 1947, Schwitters makes a newspaper headline more explicit, a reminder of the time in which his work was made. He thereby connects his art to normal, everyday life, allowing the mundanity of a humble newspaper to become immortalised through the magic of art. Around this headline text Schwitters juxtaposes a complex arrangement of cut pieces, some streaked and concealed with blue and yellow paint. Passages of off-white throughout the collage introduce flickering areas of light, particularly in the bottom centre, where a bright red ‘O’, on a black ground, contrasts sharply with a cut shard of plain, yellowing white paper, an exclamation of surprise or hope, perhaps, expressed in the simplest and most direct way. The great Russian 20th century master Wassily Kandinsky pioneered a bold new language of abstraction, one that was firmly rooted in the spiritual world. He saw art as a bridge between the real world and another place beyond the tangible, one that can only be felt through sonic vibrations of colour, pattern and light. As…