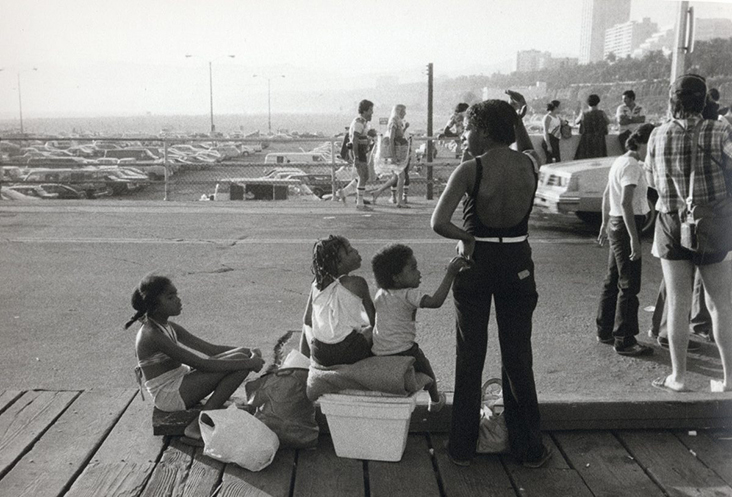 Carrie Mae Weems is one of the most radical photographers to emerge out of contemporary America. In her deeply emotive imagery, she examines how our social relationships define who we are, and give us a sense of belonging in an increasingly uncertain world. Perhaps it’s no surprise then, that Weems became a mother at a young age, and relied heavily on her family to help her raise her daughter while pursuing a career as an artist. These challenges and the intimacy of her family relationships are writ large over much of her photographic work, from her early years as a documentary image maker, to her more recent conceptual ponderings. She describes her imagery as, “the battle around the family…monogamy…and between the sexes.”

Weems followed a less than straightforward path towards success. Although she unexpectedly fell pregnant and found herself a single mother at just 16 years old, her desire to pursue a career never wavered. Her close-knit family in Portland, Oregon were Weems’ bedrock, and it was an aunt and uncle who took care of Weems’ child while she ran off to San Francisco to be a dancer. Later, Weems tried to move to New York with her young daughter bundled on her back and her belongings in a cardboard suitcase, but the challenge proved too difficult and again, it was her family who propped her up. 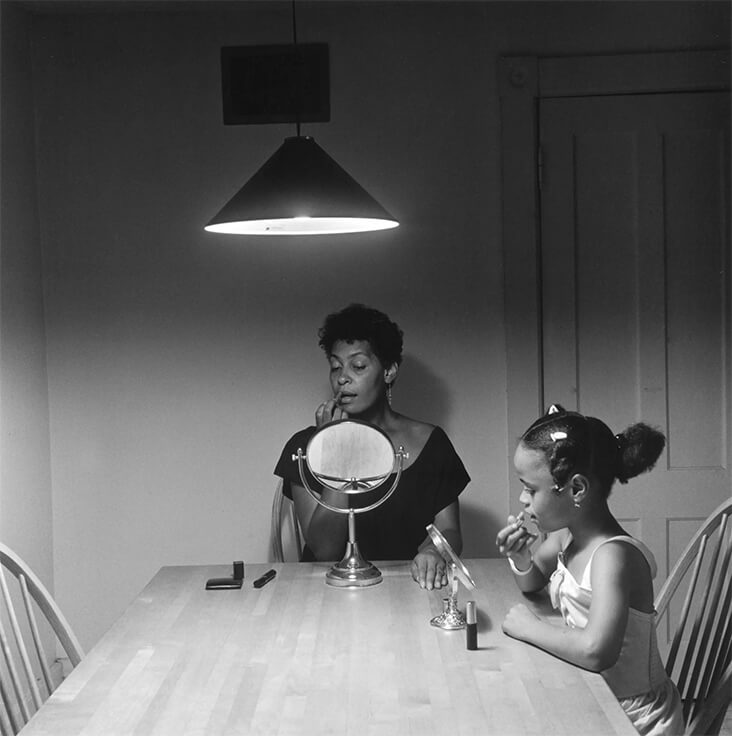 It was when Weems’ daughter was older that she found greater stability and direction, earning a degree from the California Institute of Arts in 1981, and an MFA from the University of California in 1984. Weems’ earliest photographic work of the 1970s and 1980s was in a documentary style, capturing intimate moments from her family life which were steeped in African American history. Her first solo exhibition, staged not long after graduating was titled Family Pictures and Stories. Weems made this series in response to senator Daniel Patrick Moynihan, who had suggested African American families struggled with closeness – she rebukes his presumptuous stereotypes with a stirring portrayal of family life, including childhood snapshots alongside sensitive documentations of her daughter.

In the 1990s Weems made her breakthrough ‘Kitchen Table Series’, using the kitchen table as a prop on which to stage a series of fictional domestic scenes such as childcare, housework and socialising. Although Weems placed herself in the central role in this series, like Cindy Sherman, she assumes an alternate identity here, one of a female African American alter-ego. Describing this character, Weems calls her a woman with a “bodacious manner, varied talents, hard laughter, multiple opinions.” 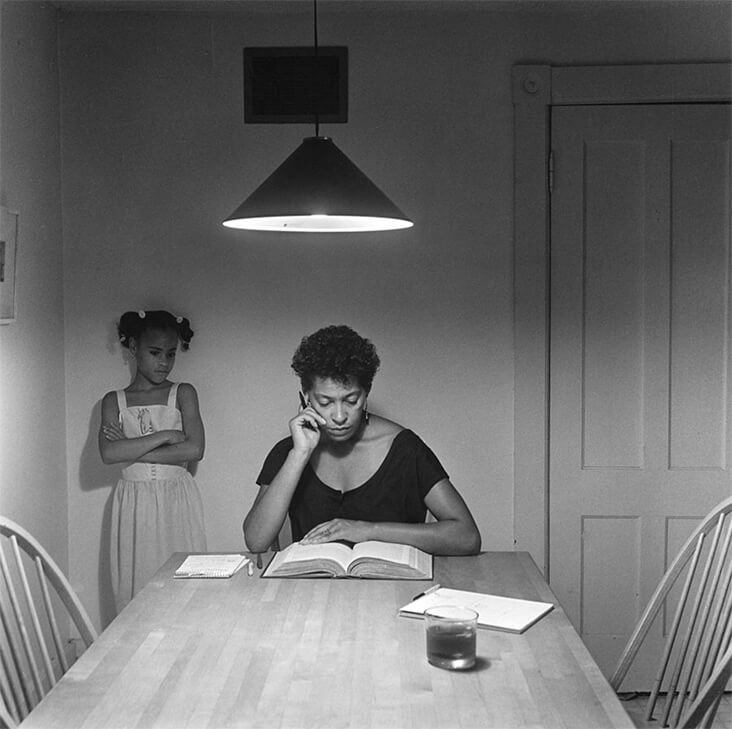 One of the most celebrated images in Weems’ Kitchen Table series is Untitled (Woman and daughter with makeup) (from Kitchen Table Series), 1990, which shows how a young girl learns the traits and masquerades of womanhood by miming the behaviour of her mother. On the one hand, Weems bases the image on her experiences with her own mother in the African American community, and the ways they will be passed on to her daughter, but critics have also pointed out the universal nature of this image, which creates a scenario that so many of us can relate to. In another image from the series, Weems is the distant, distracted mother, reading a book while her (fictional) daughter hangs in the background, and we see the wrestle between the emotional needs of the child and the mother’s desire for independence being played out.

Following on the success of this series, Weems has since taken her art in a range of new directions, including text-based art, film, video and performance. A series of photographs overlaid with text repeat phrases that reflect on Weems’ own relationship to her mother, such as You Became Mammie, Mama, Mother & Then, Yes, Confidant-Ha, 1995-96, a concise reflection on the terms of endearment that her African American family used, and which would no doubt be passed on to her own daughter. 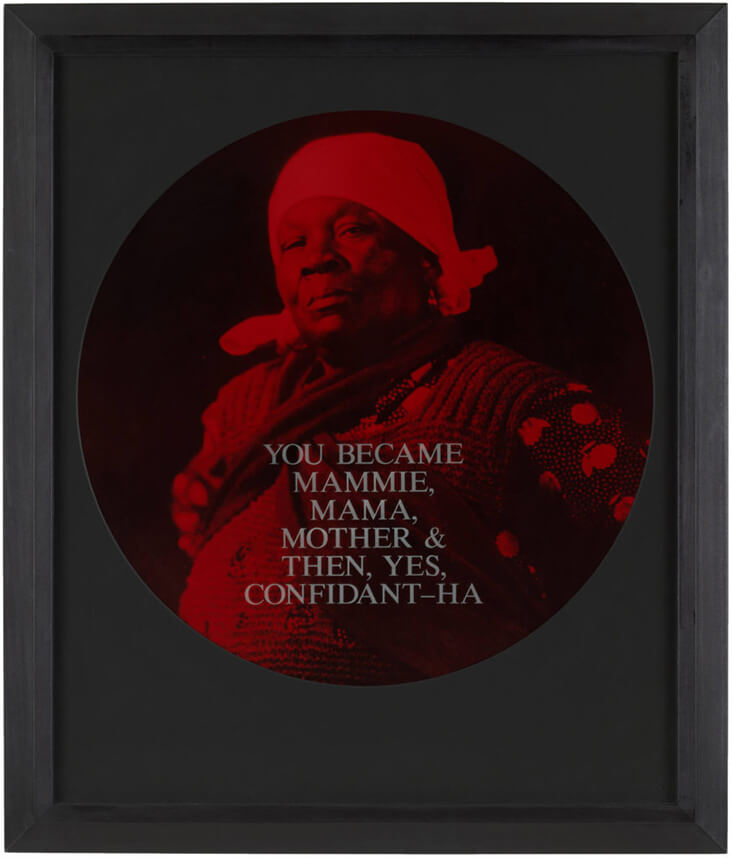 Now married and with her daughter grown-up, Weems continues to question the nature of relationships in her art, and her images ask us to think about the balances of power that so often go on in family dynamics. She says, “Life is pretty messy stuff. Can we use this space, this common space known around the world, to shine a light on what happens in a family, how it stays together and how it falls apart? What women have to be and what men have to be, because you’re always struggling for equilibrium. Somebody always has the upper hand. Every once in a while, you get stasis. If you’re lucky.”

Motherhood is a recurring theme in the art of British sculptor Barbara Hepworth, an intimate subject so close to her heart she would return to it over and over again. Mother to four children, she juggled raising them almost singlehandedly, while continuing to create some of the most important and enduring sculptures of the 20th…