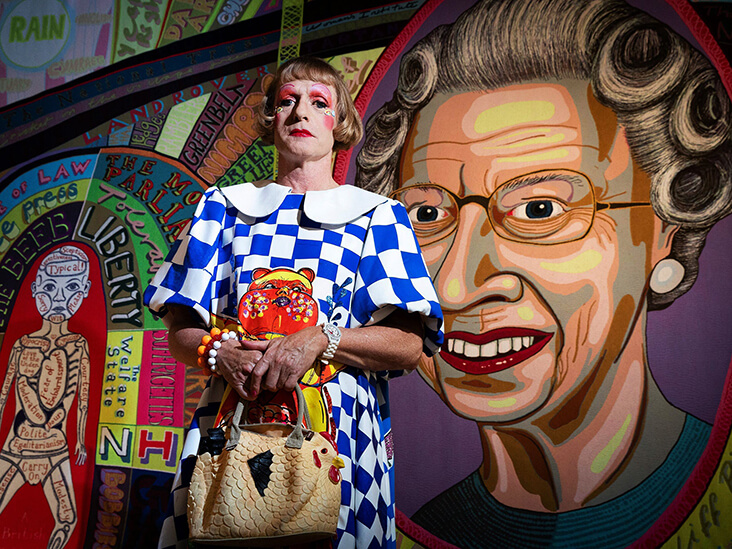 Grayson Perry in 2018, The Independent

Grayson Perry is one of today’s most radical contemporary artists, and his practice is as diverse as they come. Moving between painting, ceramics, performance, textiles, tapestries and more, his fluid approach to art and design proves just how borderless the act of making art can be. This seamless approach also bleeds into Perry’s life, as he moves between Grayson and his female persona Claire, a flamboyant eccentric adorned in pom-poms, frou-frou frills and clashing prints, a celebration of the playful art in dressing up. Fabric has allowed Perry to transition from male to female and back again, and as such it has become a source of lifelong, enduring fascination.

Perry first became drawn to fabric at a young age. As a teenager, his home life was broken and abusive, and he found an escape by disappearing into a fantasy world of his own making. One of his most powerful means of escape came through the act of dressing up in an alternate female character, which he did by borrowing his sister’s clothes and trying on her make-up. The young artist discovered just how transformative fabric and clothing could be, and he was hooked. In his early years, cross-dressing was something to keep hidden away, as he later explained, “I started dressing up before I knew anyone else did it, but that was common for people of my generation and before. There was no internet, no movement as such. We were doing it spontaneously, without realising that we weren’t alone.” 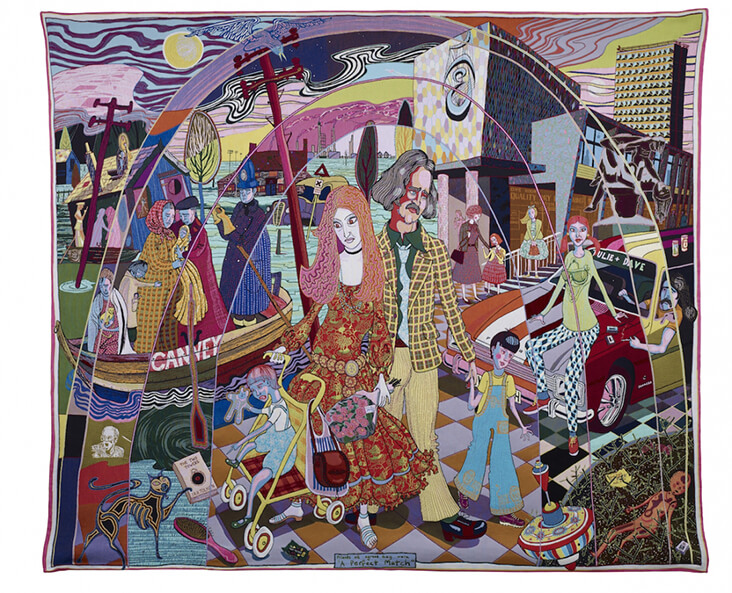 It was as a young art student in Portsmouth that Perry became more open about his desire to dress up, and he began taking photographs of himself wearing various types of women’s clothing as he worked out the styles he most connected with. “These pictures became very important things,” he recalled. As a young man, Perry immersed himself in punk subculture, and once shared a flat with Culture Club singer Boy George, who he would compete with to see who could wear the most outrageous outfits. Perry later realised he preferred the extremity of kitsch fashion, in all its exaggerated flamboyance, and his playful, madcap outfits since they are aimed at garnering as much attention as possible. 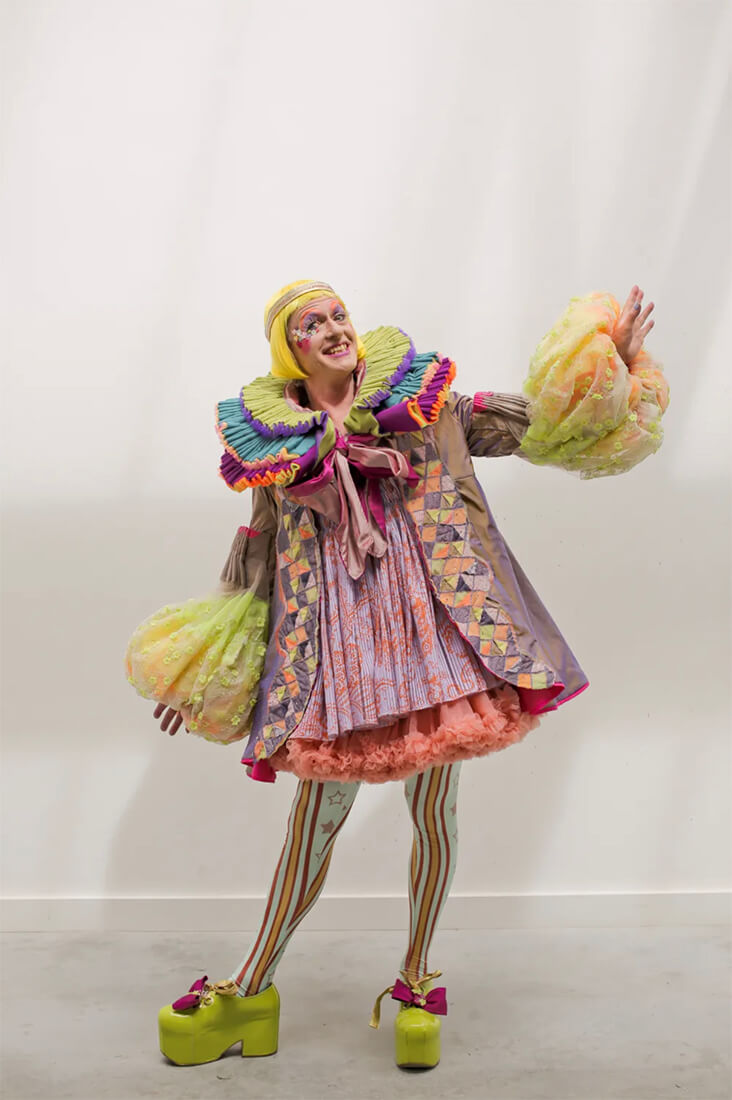 Grayson Perry in 2019, wearing a costume designed by London College of Fashion MA Costume Design for Performance student, Rachele Terrinoni in 2019, to celebrate Perry’s role as Chancellor for the University of the Arts London

This open attitude of self-exploration has played out in Perry’s artistic practice through the years, which he has used to express personal stories about his childhood as much as wider societal issues, including notions of masculinity in contemporary society. Perry has been particularly interested in reviving mediums that have been largely absent from the contemporary art world, and it was his subversive reinvention of ceramics that earned Perry the Turner Prize in 2003. His large, urn-like pots were adorned with controversial and uncompromising illustrations with a darkly sardonic edge. Perry famously turned up as Claire to collect the award, earning him a reputation, one the one hand, as what he called “a transvestite potter”, but also as a larger-than-life character with an appealingly no-nonsense directness. 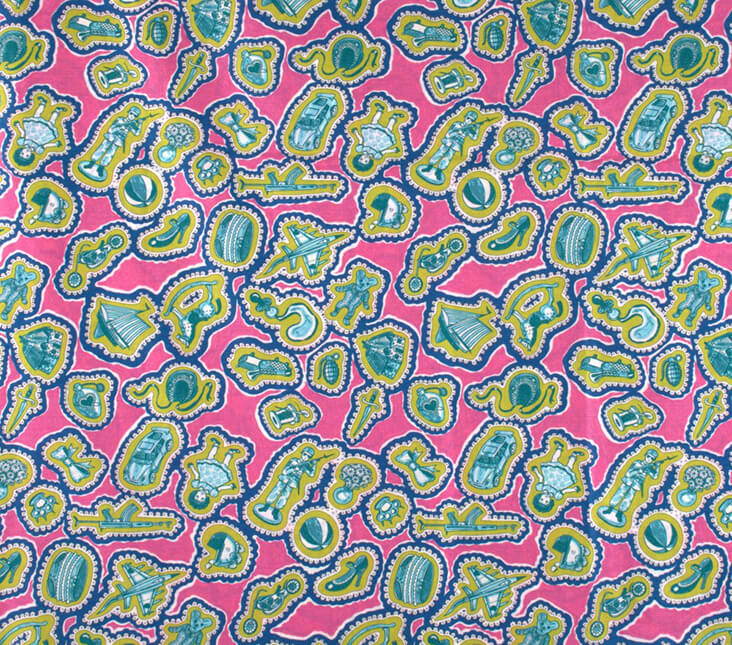 Since then, Perry has taken on many different roles that involve clothing and fabrics. From 2004 onwards, Perry has been buying dresses from fashion students at Central St Martins, challenging them to be as over-the-top and attention grabbing as possible, and building up an extensive collection that is a work of art in its own right. Perry has also worked with Liberty on a series of alternative prints that toy with the traditional, bringing elements of quiet unease into the fabric staple. Woven tapestries are another development of Perry’s ideas, allowing him to explore his richly complex storytelling abilities alongside the age-old craft tradition. One of the most famous is his vast Walthamstow Tapestry, created in 2009, which was inspired both by Perry’s love of early 20th century Sumatran batik fabrics, and the scale and wonder of the Bayeux Tapestry. Read from left to right, it charts one man’s journey through life and the uncomfortable truths faced along the way. 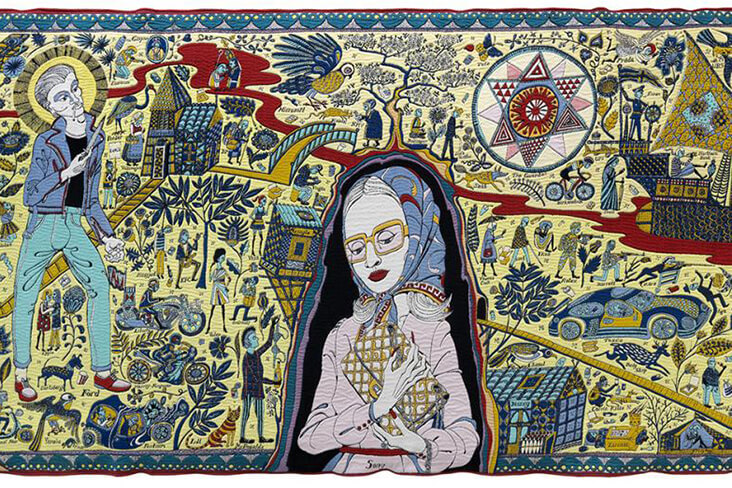 Perry likens the complexities of his tapestries to the multi-faceted nature of human character, observing how colours rise and fall like aspects of our personality, which can change according to situation and circumstance. He says, “…all the colours are present right across the tapestry… that’s why it’s so thick. But the machine brings the colour to the surface when it’s needed. I think that’s an analogy for our character. We’ve got all of ourselves there, but the bit that’s necessary in any given moment comes to the surface.”