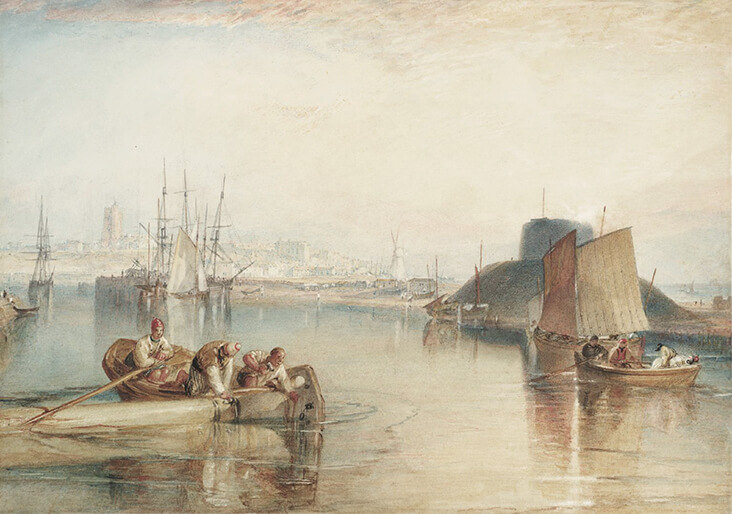 English Romanticist JMW Turner was entranced by the sky, capturing sunlight diffused through cloud with pale, golden shades like that of LEMONADE Linen. These glowing colours were the lifeblood of his art, investing into them the sublime, overwhelming wonder of the natural world, which entirely eclipsed any signs of life below it. As his career progressed, his art became ever more abstract and experimental, abandoning real world references and allowing this incredible golden light to take centre stage. His pioneering and adventurous approach to the light of landscape was unrivalled during his day, spearheading the advent of abstraction in the century that followed. 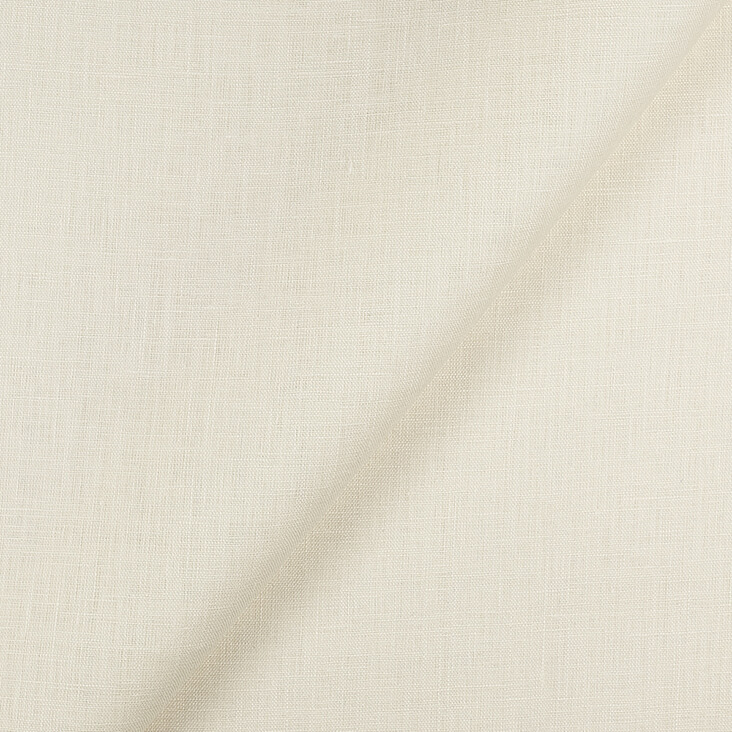 Born in London in 1775, Turner showed early artistic promise, making paintings so skilled his father enjoyed showing them off to the many customers in his barbershop. Turner began training at the Royal Academy Schools when he was just 14 years old, drawing from ancient casts and life models under their rigorous academic training programme. He also supplemented his studies with various work experience placements which would come to inform the structure and drama of his art, including stints in an architect’s office and as a scenery painter for various opera and ballet productions in London.

He first began sketching and painting from life in the 1790s as an aid to his studio work, finding the medium of watercolour particularly suited to his loose, rapid working style. Though intended as cursory studies, these en plein air watercolours are now recognised as some of the finest and most radical paintings Turner ever made, paving the way for the Impressionist movement to follow. 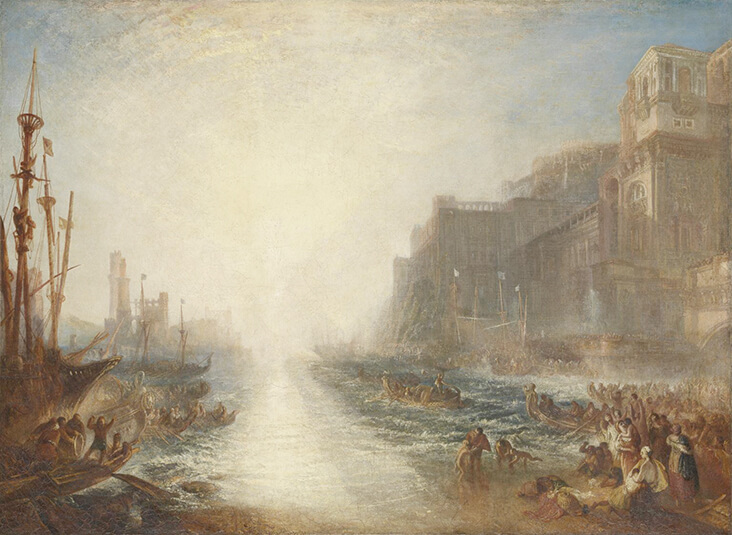 Travel throughout England, France, Switzerland and Italy in the early 19th century broadened the scope and ambition of Turner’s art, leading him to experiment more fully with the expression of natural light seeping across wide, expansive horizons. The watercolour study Aldborough, Suffolk, 1826 was made on the English coastline, capturing the sparkling luminescence of light falling onto still, reflective water, a subject Turner would return to again and again in his quest to convey the liquid possibilities of light. Across the sky clouds gather into thin, airy layers, catching pale golden sunlight in their frothy depths, a colour echoed in the tiny buildings in the far-off distance and gleaming water below.

Light is more dazzling and spectacular in the later oil painting Regulus, 1828/1837, dedicated to the legend of the ill-fated Roman general whose eyelids were sewn open by the Carthaginians, leaving him blinded by the scorching Italian sun. The searing golden-white light in the centre of the canvas is tantalisingly real, conveying the burning, agonisingly beautiful white heat of sunlight as it streaks outwards in broad diagonal lines from the centre of the scene. 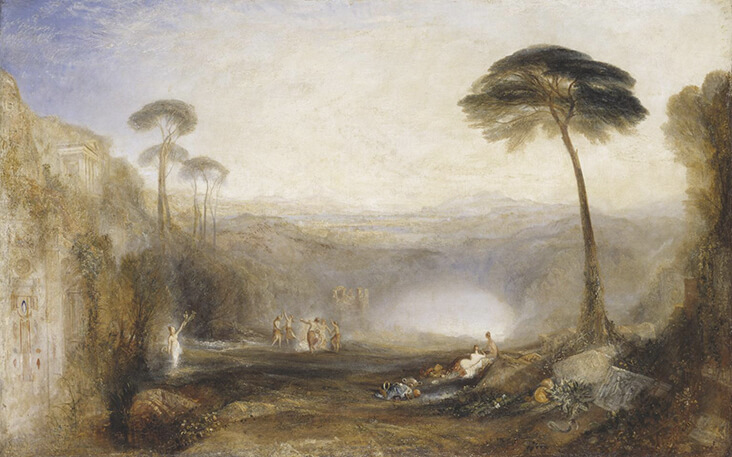 The Golden Bough, 1834 demonstrates Turner’s increasingly abstract approach to painting, as structural buildings and figures are so softened and blurred, they almost seem to dissolve into the misty atmosphere around them. Fluffy, diffused clouds fill the sky, lit up from behind to cast glowing, pale yellow luminescence that flickers across the entire sky and ripples through the faint, faraway mountains along the horizon.

The later painting portraying The Dogano, San Giorgio, Citella, from the Steps of the Europa, 1842 captures the unique watery light of Venice with a reduced palette of pale gold and lilac, offset with a mere smattering of ochre and black to add depth and weight. Ghostly, ethereal white buildings in the background catch the golden sunlight here and there, glistening with the anticipation and excitement of a new day. ”Venice,” wrote a dazzled critic at the time, “was surely built to be painted by Turner.”