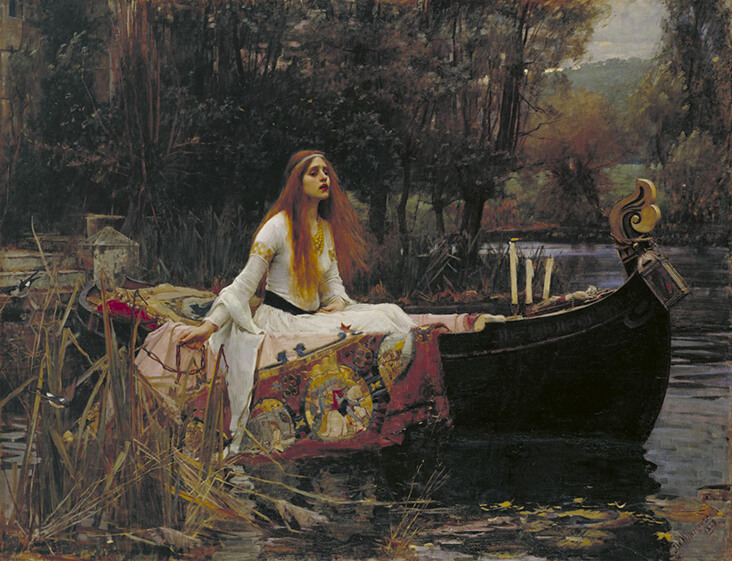 The late 19th century was an unprecedented period in the history of art, a time when the pictorial reality of earlier generations was gradually replaced with the subjective and symbolic. Although artists moved increasingly towards abstract and experimental styles, fabric continued to play a pivotal role in the practices of many, allowing room to play not just with the formal properties of pattern, surface, texture and colour, but also with the emotional and spiritual symbolism of drapery, nodding towards the religious iconography of earlier Medieval and Renaissance times.

One of the most influential and long-lasting movements to emerge from the mid to late 19th century was the British Pre-Raphaelite Brotherhood, whose ideas rippled down through the generations until well into the following century, shaping the Arts and Crafts and Art Nouveau styles to follow. Fabric was an atmospheric, theatrical device in the art of the Pre-Raphaelites, allowing them to conjure up Medieval and biblical stories with loose, flowing drapes, indulgent embroidery and sumptuous, jewel toned clothing. John William Waterhouse’s iconic painting The Lady of Shalott, 1888 captures this Pre-Raphaelite spirit, clothing his tragic, ill-fated fictional heroine in flowing white clothing as ghostly as her pale skin, while the Medieval quilts that line her boat fall decadently into the murky water below as if foretelling her death to come. 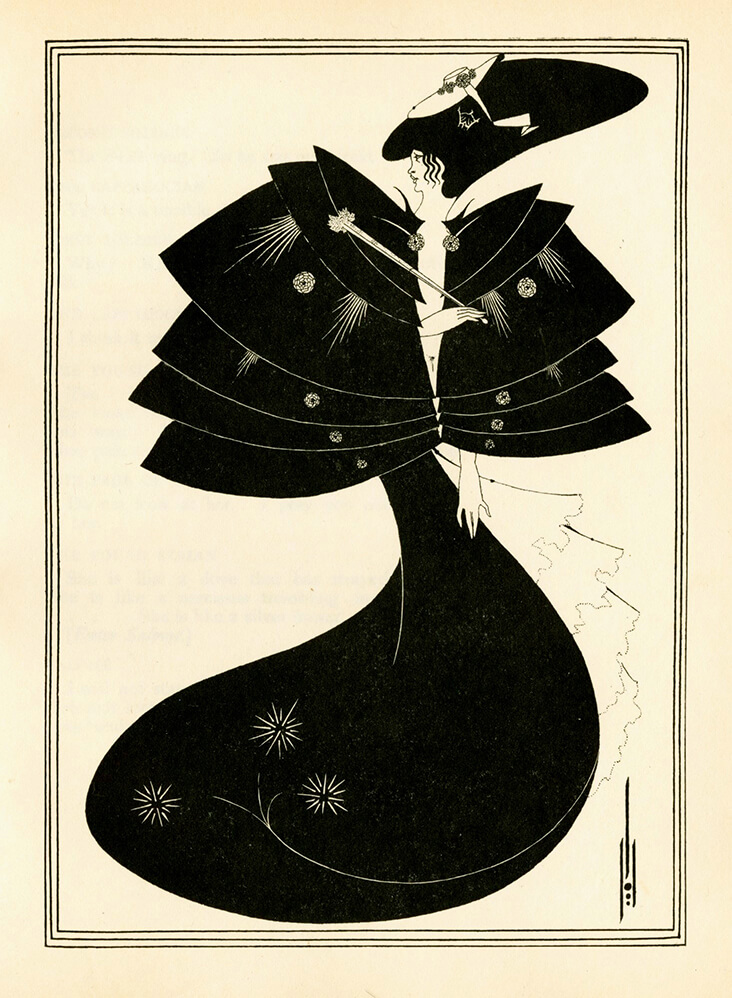 The Pre-Raphaelite emphasis on nature, pattern and ornamentation came to have a profound influence on Art Nouveau style of the later 19th century, with its sweeping ‘whiplash’ curves and intricately ornate floral motifs. British illustrator Aubrey Beardsley might be seen as a bridge between the Pre-Raphaelites and Art Nouveau, taking the former closer to the latter with his highly stylised black and white illustrations, featuring women adorned in the most fabulously indulgent costumes that are positively dripping with erotic danger and beauty. The block print The Black Cape, 1894 is a prime example, illustrating the Salome of Oscar Wilde’s famous play engulfed by the enormous, swirling drama of her jet-black clothing, peppered with sparkling white jewels and encrusted gemstones. 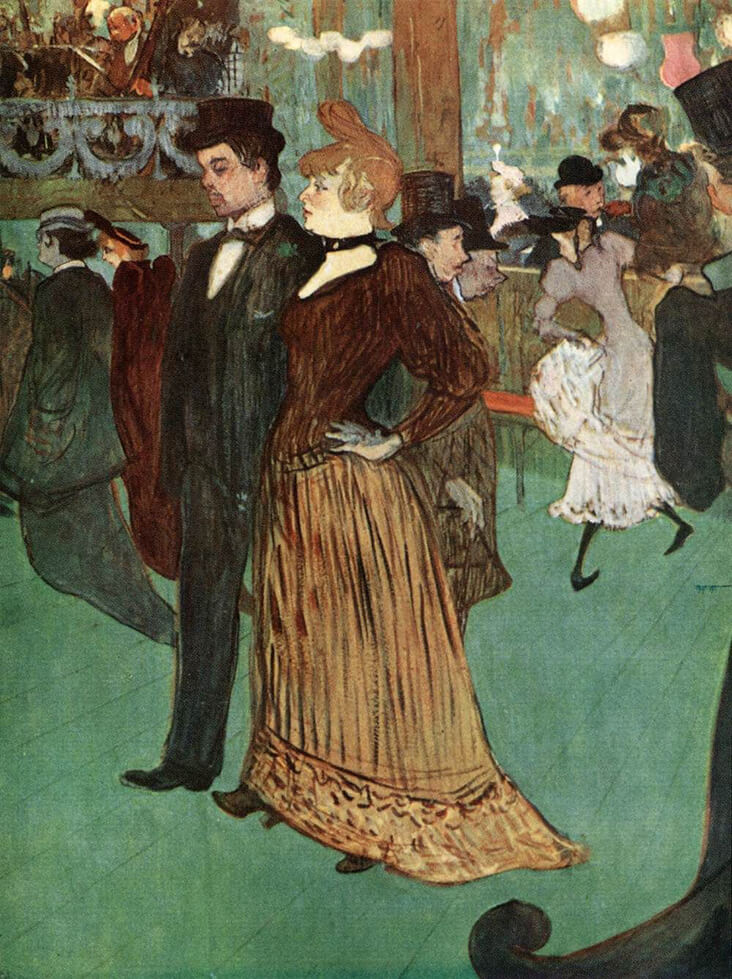 French Art Nouveau painter Toulouse Lautrec shared with Beardsley a fascination of dynamism of sinuous shapes and lines, as well as a penchant for the darker side of life. He is perhaps best known for his paintings of the Moulin Rouge cabaret in Paris, capturing the enticing and sometimes sinister allure of the Parisian nightclub from a fly-on-the-wall view perspective, with swiftly drawn ruffled skirts and collars, corseted waists, feathered hats, and flashes of vivid colour, as seen in At the Moulin Rouge, 1891-2.

The Austrian Symbolist and Art Nouveau painter Gustav Klimt carried this emphasis on decorative pattern a stage further, emphasising the incredible symbolic possibilities of surface and texture with richly decorated canvases that take on a semi-precious quality, much like the gilded religious icons of the past. His world-renowned painting The Kiss, 1908 is a glorious tribute to the heightened emotional state of love, as a man and woman embrace under a luminescent, intricately adorned gold blanket painted with real gold leaf that sparkles with dazzling radiance in the light, engulfing their serene bodies into its midst. 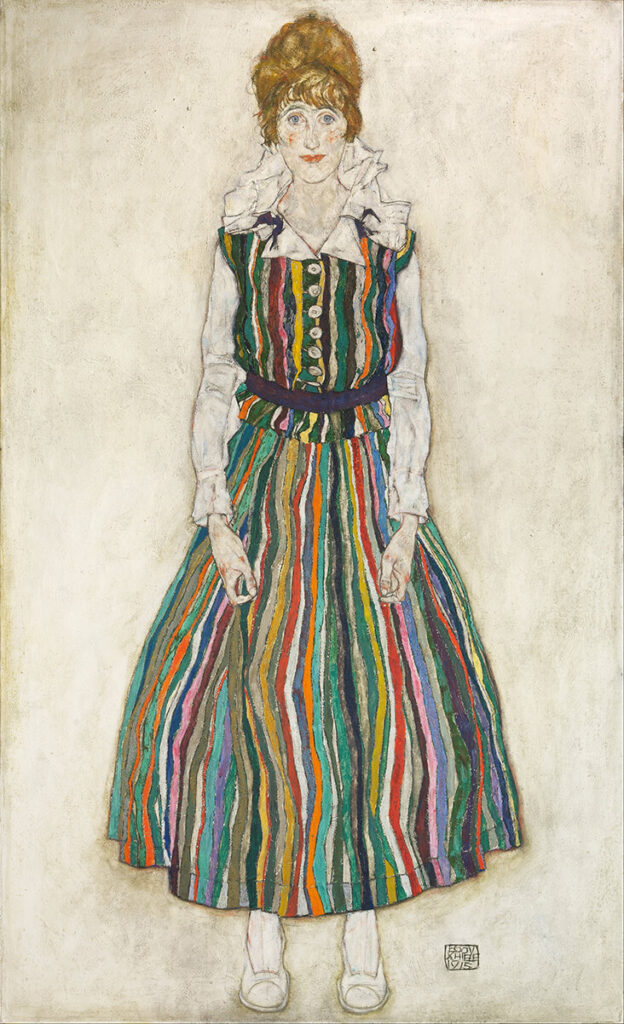 The young Austrian artist Egon Schiele was a former pupil of Klimt, learning much from his mentor about the emotive and symbolic properties of aesthetic decoration. Like Klimt, Schiele made many portraits throughout his short-lived career, but in contrast with Klimt, Schiele’s subjects have a self-conscious intensity, meeting our eyes with theirs as if aware they are being watched, a state that reflected the increased understanding of human psychology at the time. Clothing and fabric also played a role in intensifying the emotional state of his subjects, adding greater depth to their character with varying colours, patterns and brushstrokes. Portrait of Edith, The Artist’s Wife, 1915 is a tribute to Schiele’s wife Edith, posing in a self-conscious and awkward manner with limbs held straight and upright, an attitude reflected in her stiff, starched clothing. Yet it is her dress which takes centre stage, dazzling our eyes with its seductive rows and rows of mesmerising candy stripes, hinting at unseen aspects of Edith’s character lurking beneath the façade.