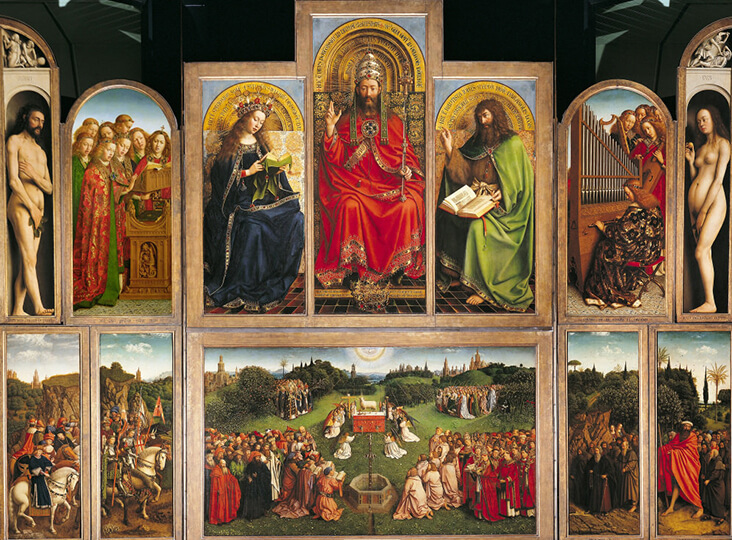 “Painters of the Northern Renaissance clothe their figures in a fabric that has the friable angularity of carvings made from wood.” Andrew Graham-Dixon

During the 15th and 16th centuries, the enlightening ideas of the Italian Renaissance spread throughout Northern Europe, lifting it out of the Dark Ages into the wonder of a new era. Much as Northern artists were influenced by the billowing fabrics and heightened realism of Italian masters, they also developed their own distinctive approaches, setting them apart from Italy in ways that are now almost instantly recognisable. Where Italian fabrics flowed sinuously across bodies and landscapes with the fluidity of water, Northern artists conveyed fabric with a crisp, cutting sharpness and a weighty, sculptural solidity, developing sparkling levels of realism that stunned patrons and audiences alike. 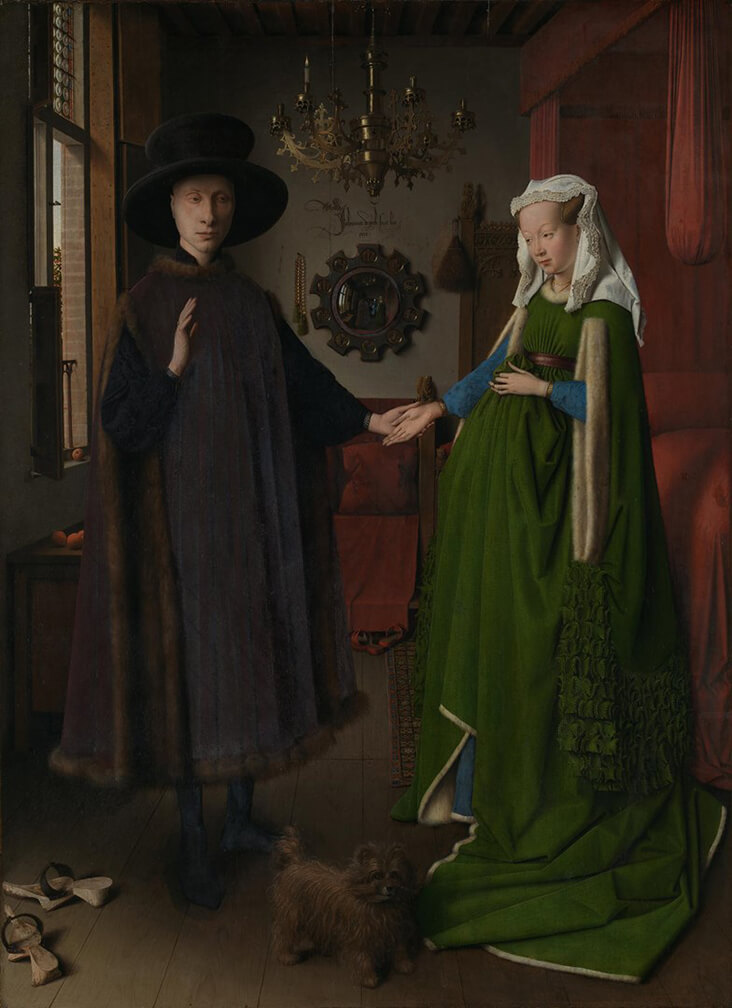 Thanks to the invention of the printing press, ideas from Renaissance Italy spread across large swathes of Northern Europe, including the Netherland, Belgium, Germany, France and England. Like Italy, many cities formed a merchant class of wealthy patrons, who saw in both fabric and art a means of demonstrating their recently acquired status and capital to the outside world. The church also saw the ostentatious, symbolic and narrative potential in fabric, investing their interiors with lavish furnishings and commissioned Biblical altarpieces filled with swathes of dazzlingly bright, unravelling drapes of cloth.

The Ghent Altarpiece, 1432, is often cited as the most important painting of the Northern Renaissance. Completed in The Netherlands by two brothers, Hubert van Eyck and Jan van Eyck, it demonstrates an astonishing level of realism, as 12 separate panels come together, combining stories of both earthly and divine spiritualism. In the central three panels, three enthroned figures sit in unity: the central could be God or Christ (experts are undecided), while Mary is on the left and John the Baptist on the right. Indulgent, weighty fabric engulfs their bodies as if anchoring them to the ground, while their colours of blue, red and green mirror the sky, blood and earth that unfolds throughout the other panels. Fabric also gives these figures a spiritual weight that stands in marked contrast to the earthly, naked bodies of Adam and Eve that flank the outer edges of the altarpiece. 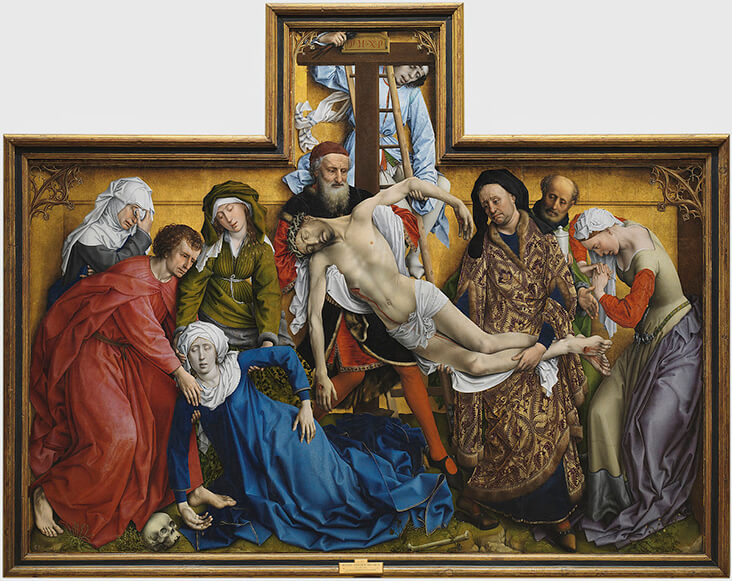 Jan van Eyck’s astonishing and world-renowned Arnolfini Double Portrait, 1434, was painted just two years later. Drapery holds great significance, both visually and conceptually in this dazzlingly real portrayal of the Italian cloth merchant Giovanni di Nicolao di Arnolfini and his bride in their new Bruges home. Their fur lined, jewel-toned garments and interiors are lavish and sumptuous, forming an outward display of their wealth – the high-quality wool they wear was more valuable than silk, while vivid, rich colours suggest the costly process of production. Fabric historian Amber Butchart points out, however, that they are not regal, or courtly aristocrats, arguing, “there is no precious cloth of gold, no expensive embroidery – this is not courtly splendour but mercantile riches transposed into fabric.” 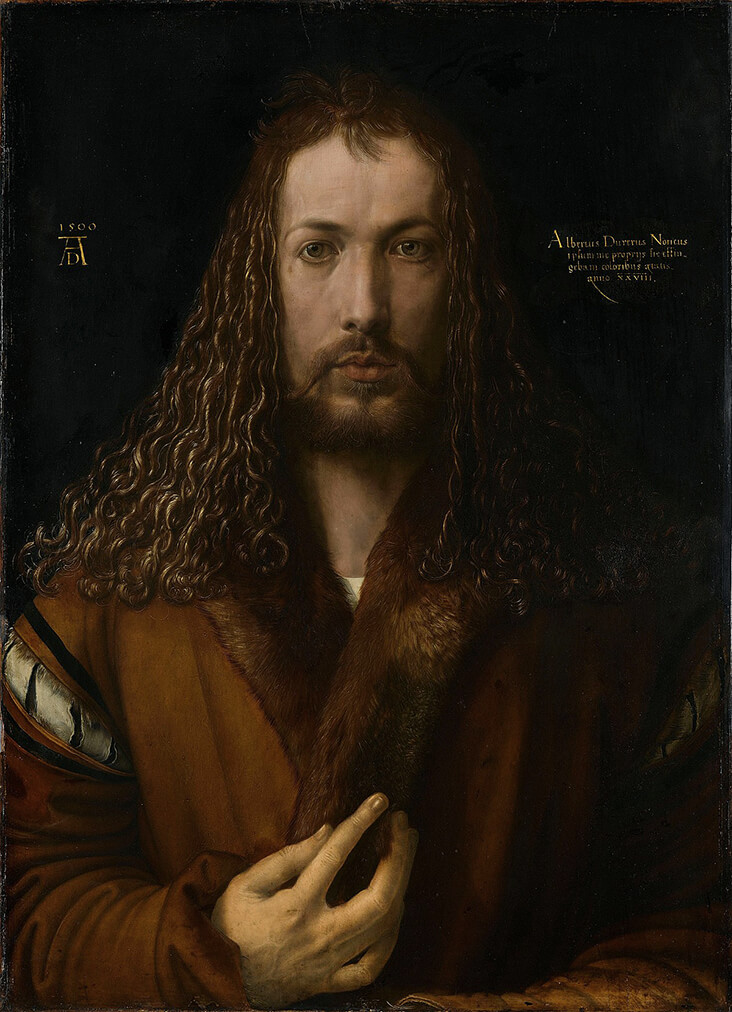 Another influential painter from The Netherlands, Roger van der Weyden, conveys the same solid, weighty fabric as Van Eyck. In his Descent from the Cross, 1435, figures are almost completely consumed by their clothing, which falls across his crowded, shallow frame with the craggy, angular outlines of a rocky landscape. In the central panel, Mary faints into a crumpled heap, while her iridescent blue robes form angry spikes and shards that pull her to the ground, mirroring the devastating grief that consumes her. 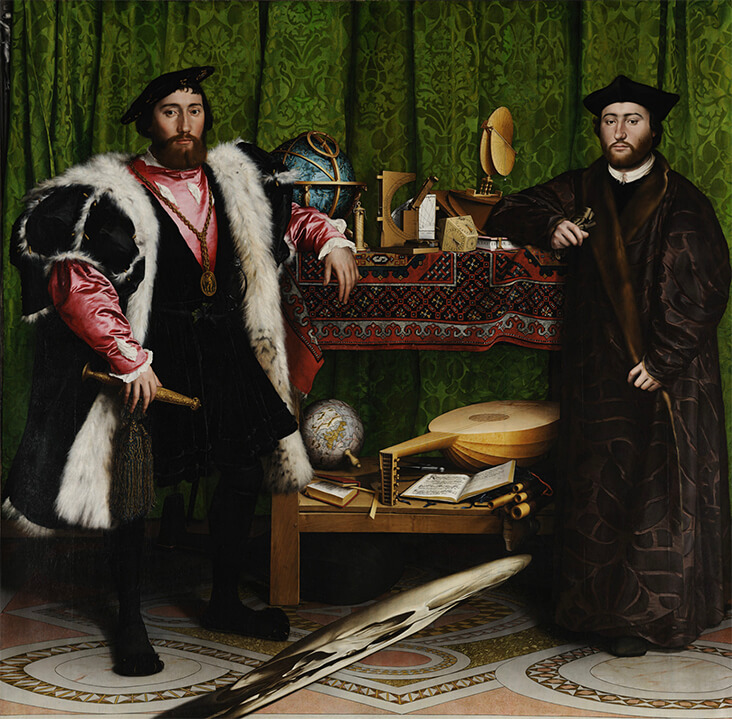 In the austere, restrained paintings of German artist Albrecht Durer, made throughout the mid-16th century, fabric is less animated, forming vertical strands of shadow that gently billow, crease and fold with an understated elegance that is as refined as his pared back colour schemes. Among his greatest works are his self-portraits, which convey his lean, angular physique adorned with muted, angular strands of clothing. Another German painter, Hans Holbein the Younger, became the 16th century’s greatest portraitist, moving to England in his later years to become court painter to Henry VIII. Much like Van Eyck, he focussed on fabric as a conveyor of wealth, as seen in his grandiose portrayal of The Ambassadors, 1533. He paints the diplomat Jean de Dinteville with his friend Georges de Selve, Bishop of Lavaur in richly detailed, indulgently lavish fabrics including furs, velvets and silks, which are tantalisingly, touchably real, while even an elongated skull features in the scene, only seen in full view from a certain angle, demonstrating the virtuoso levels of skill reached by the peak of the Northern Renaissance.

Hitomezashi Sashiko on The Ashton Top: Part ONE

This is a tutorial where I will be sharing how I embellish the Ashton Top (designed by Helen’s Closet Patterns) with Hitomezashi Sashiko. The tutorial is divided into two parts, and in the first instalment, we will be focusing on preparing the grid for Sashiko-stitching on the Ashton Top. After drawing the grid on the…

If you like sewing your own clothes, there will be a time where you will come across a pattern that requires knowing how to sew set-in sleeves and attaching them to the bodice. And this is when this tutorial will come in handy. A set-in sleeve is the most basic of sleeves and as its…