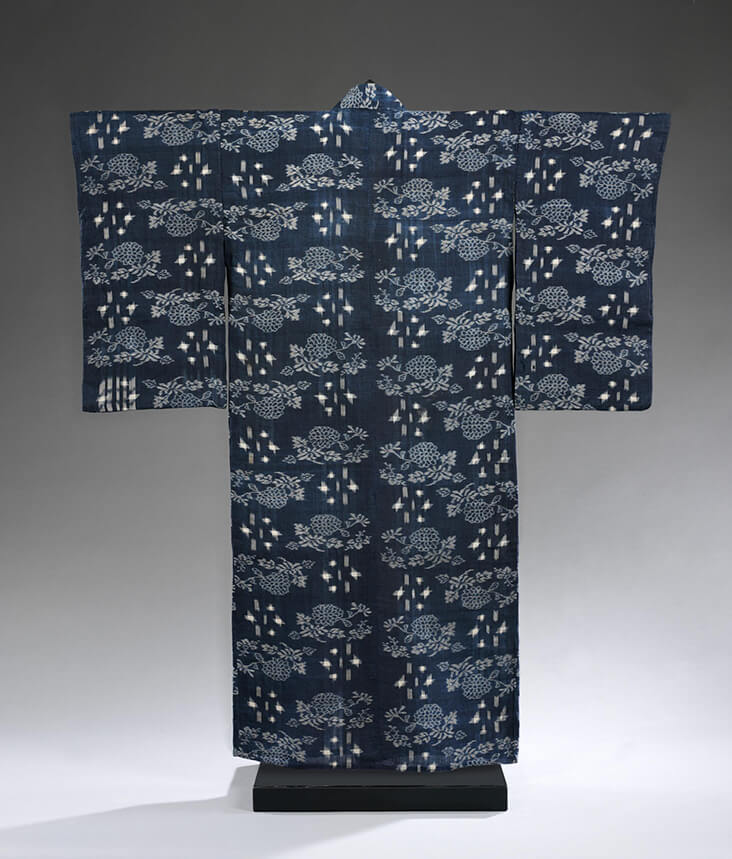 Floral Japanese printed fabric using indigo dye to produce a range of blue tones, from the 18th and 19th century

Indigo’s deep blue has been treasured by Japanese people since ancient times, forming a vital strand of their sartorial and visual culture. Known in Japan as ‘aizome’, indigo dye is so integrated into Japanese society that this deepest, entrancing shade is often referred to as “Japan blue.” Initially only reserved for the wealthiest members of Japanese society, the colour reached its zenith in the 17th century, colouring the clothing and interiors of almost every interior across the nation.

The timing is not clear, but it is believed indigo was introduced to Japan either through the silk trade of India, or through the ancient cultures of China. Evidence does suggest, however, that indigo production had begun in Japan as early as the 6th and 7th centuries. Because it was so difficult to produce, indigo was reserved for the wealthiest and most important members of society, particularly aristocrats and royalty. Early on it was discovered that Japanese indigo dyed fabric has many medicinal properties; its insect repelling and anti-bacterial qualities in particular made it a popular choice for Samurai soldiers charging out into bloody battles. 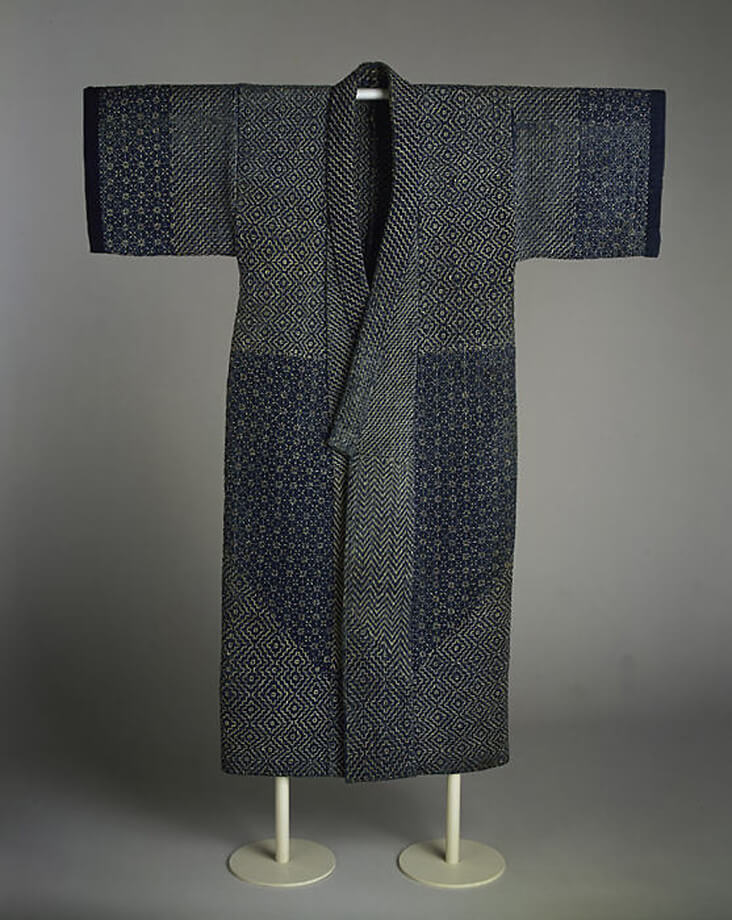 By the 17th century indigo production had increased exponentially, forming a backbone to the Japanese economy and one of the world’s most prolific indigo manufacturers. At its peak the country held over 1,800 indigo farms. During this time, indigo tones became so widespread that an itinerant travelling scholar from Britain labelled the colour “Japan blue,” a name that has stuck ever since. The fabric was especially popular for everyday clothing and household items such as kimonos for men and women, bedspreads, towels and tablecloths because of its moth repelling odour, while it was also amazingly a powerful fire-retardant, forming clothing for Japan’s fearless firefighters. Patterns varied, but usually featured intricate organic or geometric designs which were made using tie-dye or stencil-resist techniques (made with rice paper stencils), or by weaving together areas of dyed and undyed yarn. Some areas practiced a process of binding yarn before dyeing to allow certain sections to resist picking up indigo colour – this could then be carefully woven into highly detailed patterns.

The Japanese tailored their own careful, labour intensive method for producing indigo dye from a range of plants including indigofera and Persicaria tinctoria, a process which they call “aizome.” To release the dye, or indicant, from the plant, leaves are composted and fermented for three and a half months, forming a substance known in Japan as ‘sukumo.’ This is then placed into huge vats of water mixed with lye, lime and other substances and fermented again. Once fully fermented, fabric can be submerged in the vat for up to 30 minutes, before being removed and hung up to ‘oxidise’ in the air on a rope. This dipping and oxidising process can be repeated any number of times to achieve the desired colour – some fabrics are even submerged up to 30 or 40 times to create the richest, darkest hues. 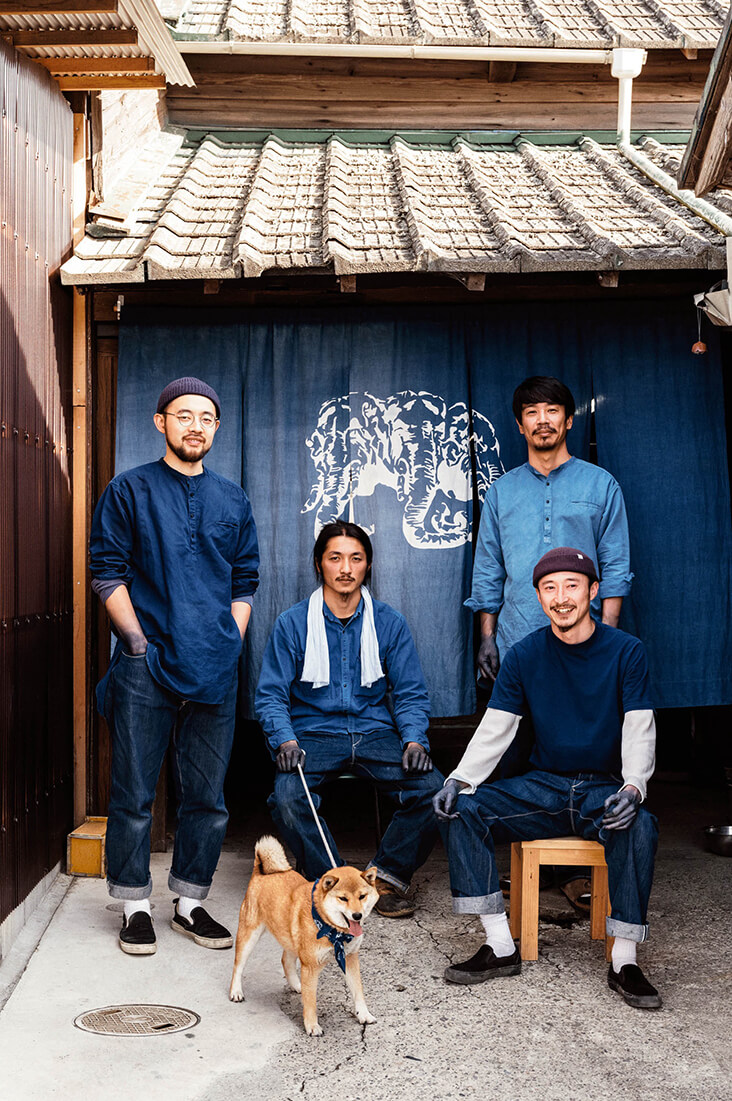 Given how labour intensive and hand-made the process is, inevitably a huge variation in shades of Japanese indigo exist, many of which have been named to distinguish them from one another. The lightest shade is known as “aijiro” (indigo white), while the deepest tone which is closest to black is commonly referred to as “noukon” (navy blue). Fascinatingly, the huge, landmark tower in Tokyo known as Tokyo Skytree was made in the delicate shade of aijiro in 2011, while the Tokyo Olympic Games logo for 2020 was made in this fascinating colour, proving just how ingrained into Japan indigo continues to be. 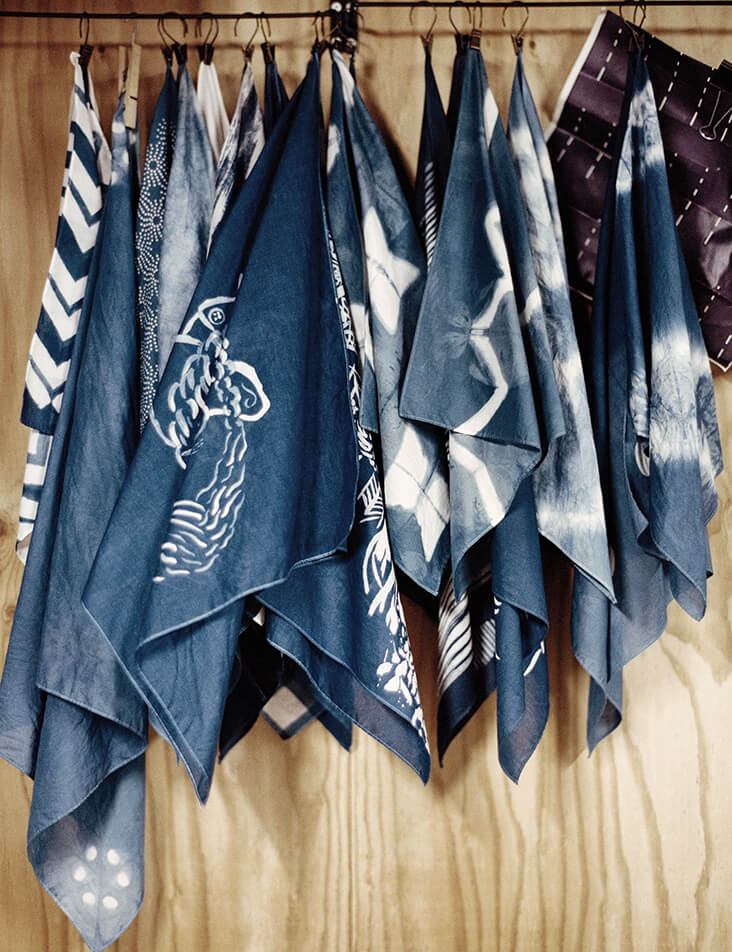 As synthetic variants took over, the traditional manufacture of aizome in Japan has slowly faded way, with only four sites dedicated to this fine art still in production today. One of these is the Tokushima Prefecture on Island of Shikoku which dates back to 12th century. Another in Ohara known as Ai no Yakata is run by the artisan Toru Shimomura, who still rates this most ancient of practices, which involves entirely natural ingredients and the care and dedication of the human hand, as far superior to any industrialised efforts, commenting, “Natural dyed indigo has a depth of colour and reflects the light in a way which is very different from textiles made with chemical indigo dyes.”