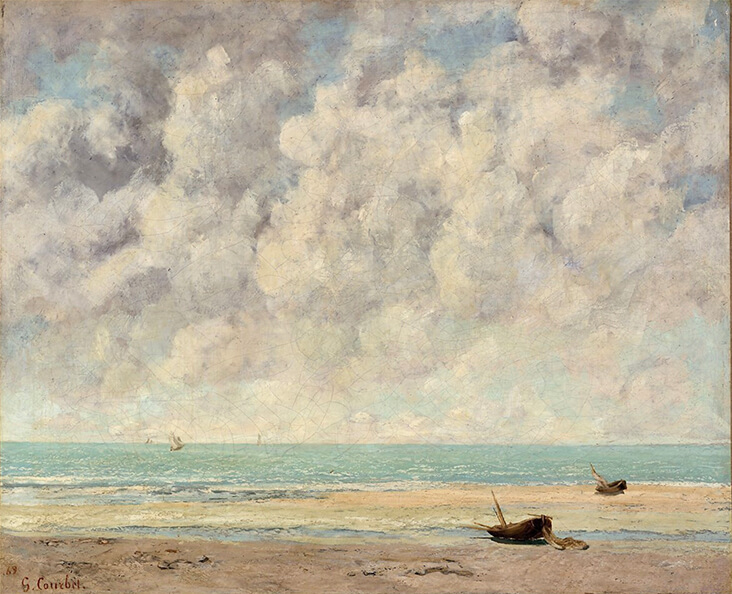 The creamy tone of ANTIQUE WHITE Linen glistened across the great Realist painter Gustave Courbet’s canvases, investing them with the sparkling vibrancy of the French coast. Courbet’s trademark palette was warm beige, sandy or golden tones, applied with a knife to the canvas in thick slabs as rich and heady as buttercream. These streaks came to punctuate otherwise darkened scenes with glowing sunlight, spreading across wide expanses of pale sand, crumbling rocks, and heavy clouds laden with rain. Dedicated to capturing the essence of real time and place in these scenes, he observed how “Painting is an essentially concrete art and can only consist of the representation of real and existing things.” 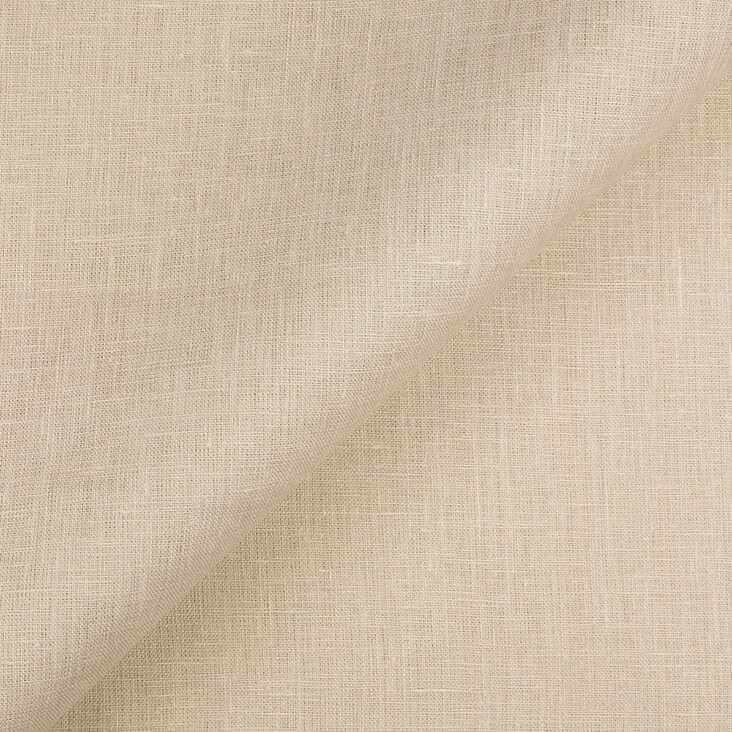 Later calling himself the “proudest and most arrogant man in France,” Courbet originated from humble beginnings. Raised on a family farm at Ornans in Eastern France with three sisters in the early nineteenth century Courbet loved the great outdoors, while his larger than life personality made him stand out among his peers at school. Determined to become an artist, Courbet initially moved to Paris to train at the Steuben and Hesse studio in 1938, but he learned far more by obsessively copying work by the old masters including Caravaggio, Rembrandt, and Rubens in the Louvre.

In the years that followed Courbet began painting family members and paid models directly from life, applying the understanding of light and shadow gleaned from copying Renaissance masterpieces. It wasn’t long before Courbet had joined forces with a growing band of intellectuals in Paris who called themselves Realists, dedicated to the pursuit of the ultimate truth in art. Courbet made his name within this group by painting the gritty realities of working people’s lives on a huge scale, highlighting the simple honesty of their ordinary struggles in a language that the French public could finally relate to. 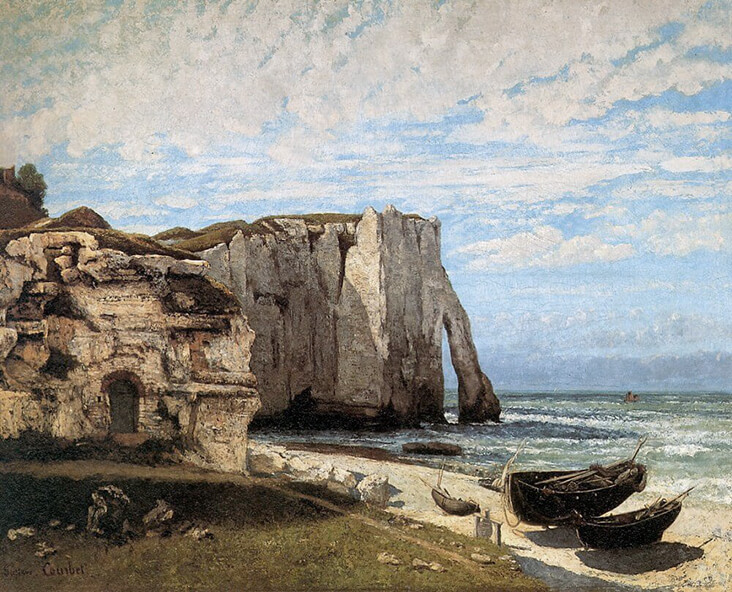 But within the staunchly conservative French art establishment Courbet struggled to gain acceptance for these transgressive, ground-breaking paintings that made a sharp break from idealised, historical traditions. In the face of steady streams of rejection Courbet’s strength of spirit won through – when three paintings were rejected from the 1855 Paris World Exposition, he set up his own pavilion nearby under the banner name ‘Realism’, where an astonishing array of 40 paintings were displayed to the gallery going public, demonstrating a bravado independence that had never before been seen by an artist.

Throughout the 1860s Courbet’s subject matter became more varied, including nudes, landscapes and seascapes, but his quest to paint the truth of the real world became more focussed than ever. Courbet’s seascapes are among his best-known works of the period, capturing with rapid, expressive brushstrokes the mutable nature of light falling across the land. He returned over and over to the Normandy beaches to paint the rugged and untameable ocean from life, calling his minimal sandy and aqua blue views of the coastline the paysage de mer (sea landscape). These paintings, more than any others, had a profound impact on the Impressionist paintings that were to come in the following decade. 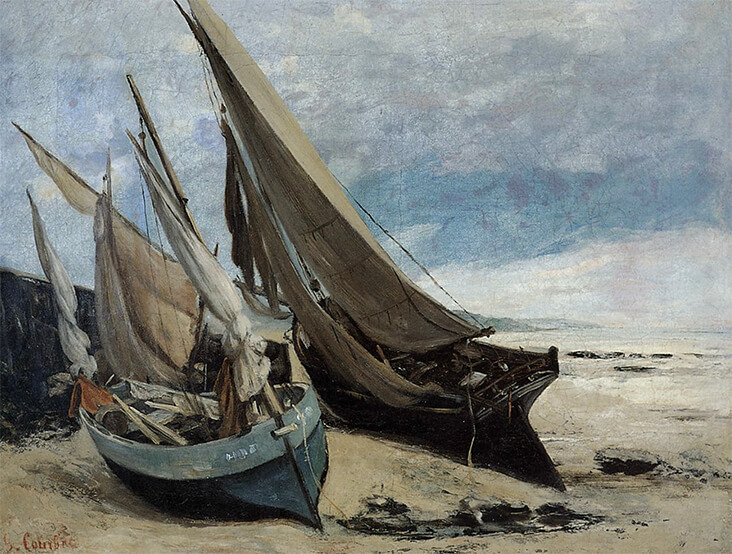 Fishing Boats on the Deauville Beach, 1866

In The Fishing Boat, 1865, a worn down boat falls into a broken heap, a great symbol of the exhausting and life-threatening work endured by fishermen at sea. Modulating shades of brown undulate over its surface, while in the foreground streaks of buttery pale-yellow capture rocks glinting in the last stages of sunlight before nightfall. Boats also suggest human presence in Fishing Boats on the Deauville Beach, 1866, leaning to one side as if weighed down by the excesses of hard work. Around them pale sand is painted with thick slabs of creamy colour, echoed in the natural and unbleached tone of stretched linen sails. Autumn Sea, 1867 juxtaposes a yellowing, thundery sky with furious foamy water below in dazzling pale turquoise hues, while tiny boats disappear onto the horizon. 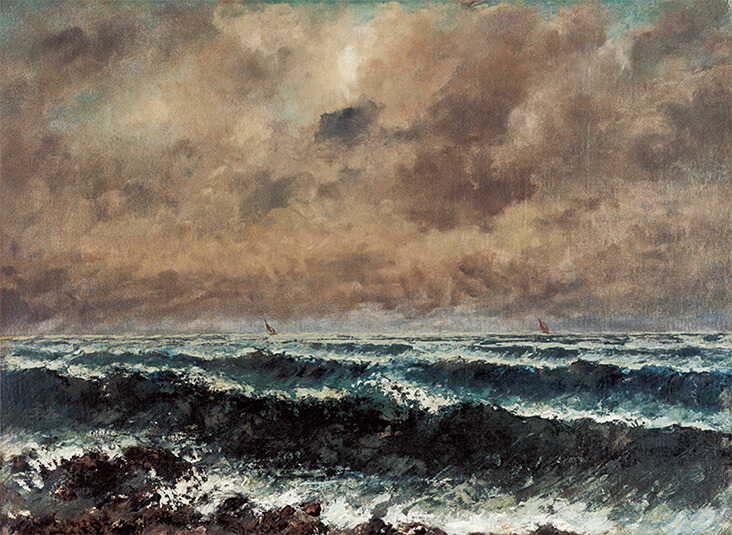 The Calm Sea, 1869 is minimal and calm by contrast, as a huge pastel blue sky opens out overhead, lightly dappled with smoky puffs of white cloud. In the foreground pale golden sand and strips of turquoise, salty seawater form contrasting stripe patterns that ripple in and out of softly diffused sunlight. The Cliff at Etretat After the Storm, 1870 is lit instead by a clear, crisp blue sky, forming sharply defined shadows across rugged cliff faces. With his trademark golden, sandy tones and deliciously thick passages of  oil paint Courbet captures the weighty solidity of these ancient rocks, whose craggy, careworn surfaces are etched into and gradually worn away by the slow and steady traces of time.