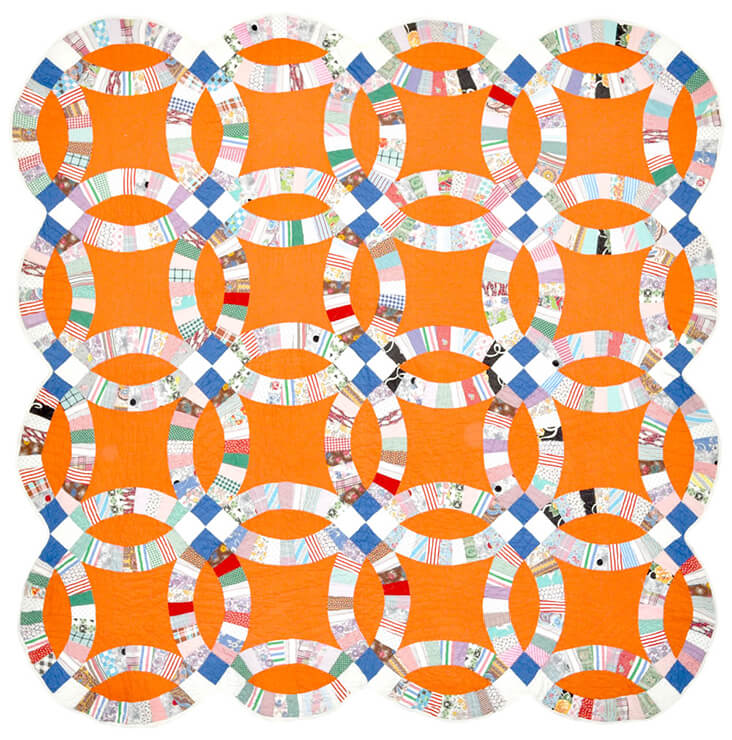 Double Wedding Ring Quilt, 1960-1970, made in Missouri, from the collection of Bill Volckening

“Every quiltmaker in the 1970s (was) an innovator… People made their own rules, broke them and came up with their own solutions to the problems they encountered while making quilts.” Bill Volckening, quilt historian and collector

The 1970s were a landmark period in the history of American quilting. A whirlwind of change led people to the nostalgic and homespun, from the Back to the Land Movement to the Fiber Art uprising, Feminism and the Arts and Crafts Revival. Quilting encapsulated this spirit of creative change, harking back to simpler, preindustrial times driven a mend and make do attitude. When the American bicentennial hit in 1976, quilting became the ideal artistic medium to reminisce about prairie life and the great cultural history of America’s foundations. But looking back, the vibrant, lively quilts of the groovy, 1970s hippie era are also very much a product of their time, as quilting collector and historian Bill Volckening points out, “The first thing that jumps out about the quilts of the 1970s is the colour, but the quilts have relevance beyond colour … a new perspective on old quilts created the revival in quilt making.”

One of the most important occurrences that led to a quilting revival was the Whitney Museum’s exhibition Abstract Design in American Quilts in 1971. Featuring works from the extensive quilt collection of Jonathan Holstein and Gail van der Hoof, the striking optical designs of pieced quilts from American history were compared with abstract paintings exploring the very same geometric, structured language of difference, balance and repetition. Rather than referencing any particular time period, instead, curators deliberately selected quilts with “the greatest visual interest and impact.” Instead of lying the quilts flat, they were hung like paintings on the wall, inviting viewers to understand and truly appreciate the months or even years of artistry that had gone into the making of these intricately complex, richly textural designs. Universally praised, the show signalled the dawn of a new era in quilt making. 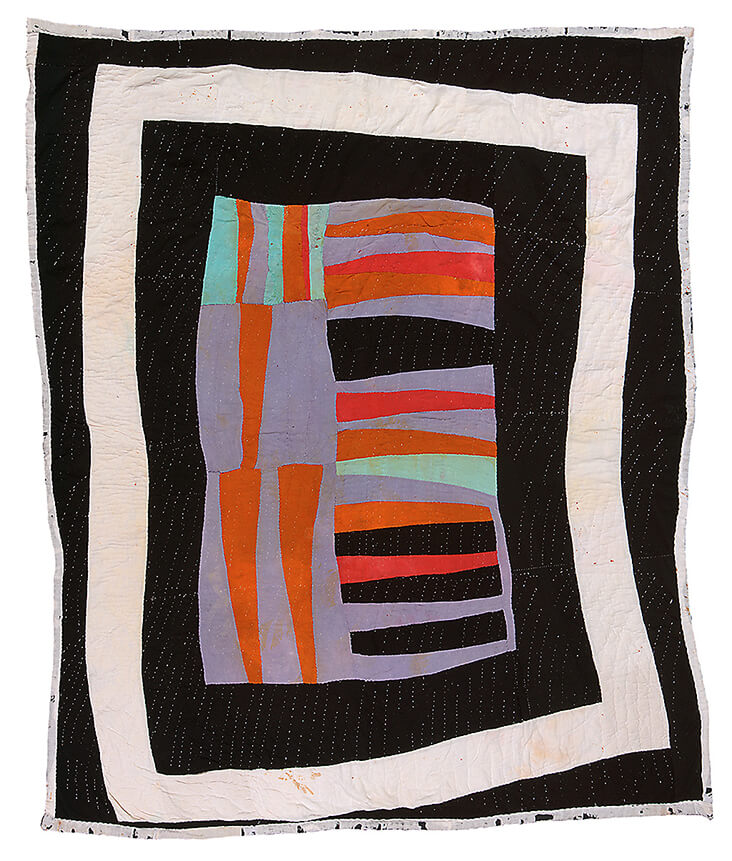 The phenomenon of art quilting arose in the wake of this exhibit, led by Faith Ringgold, Yvonne Wells, MC Lamb, Jean Ray Laurie and Nancy Crow. Each in turn explored how quilting could convey culturally significant moments in time through its history of storytelling, sometimes telling harrowingly dark tales with a language that has strong feminine associations. Many of these artists also highlighted the vital role quilting has played in women’s history over the centuries and their attitudes continue to shape the work of contemporary artists today.

Another watershed moment in the history of quilting came following the American bicentennial. Quilting was by now long recognised as a symbol of the simple prairie life that had built America, as well as a private language for the slaves who fought and died for equality. Because of this, many made quilts in celebration of this history with a distinctly nostalgic feel, echoing the deeply familiar motifs, patterns, layouts and stitches of the past but with a modern twist, introducing new, more contemporary or unusual colour combinations. Following the bicentennial, quilting remained popular through many strands of society, from free loving hippie communes to inspired and dedicated individual makers. Popular women’s magazines also picked up on the trend and helped popularise it, publishing ever new inventive approaches and ideas. Quilt historian Eleanor Levie describes how, “Almost every quilt historian, and certainly every one who started quilting in the early to mid-1970s, can attest the influence America’s 200th birthday had on quilting. As a celebration of our history, this event grounded everyone in the values of root and traditions.” By the end of the 1970s a number of quilting guilds had been formed, aimed at supporting and bringing together this vast and ever-expanding community. 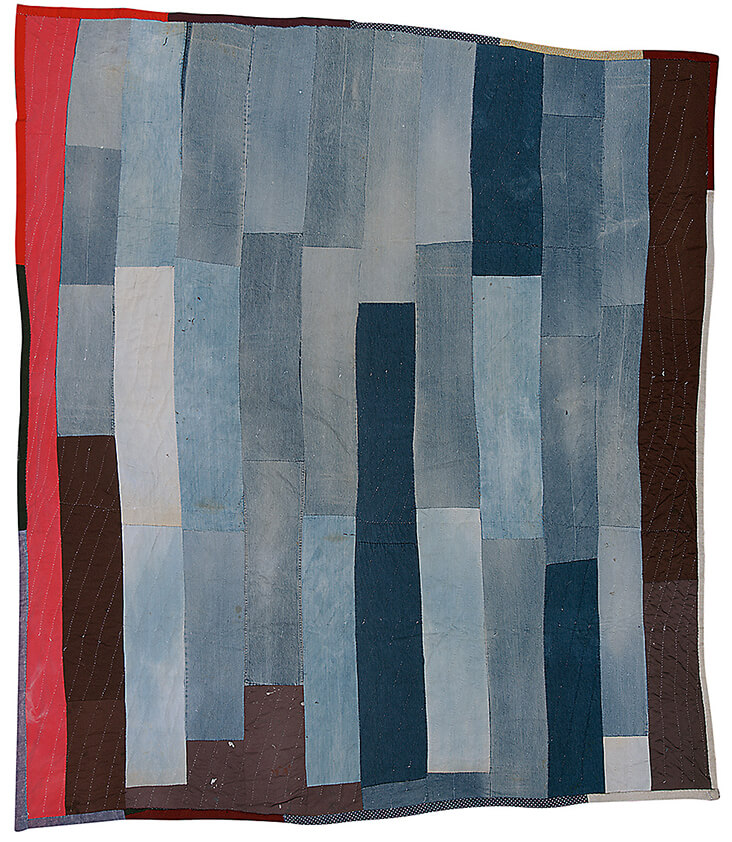 Bars, Work-Clothes Quilt / Loretta Pettway /
1970s “I made all of my quilts out of old shirts and dress tails and britches legs. I couldn’t never get no good fabric to make quilts, so I had to get the best of the old clothes my peoples wore or old clothes I got from other peoples. I get the best of the shirt sleeves or whatever part of the pants wasn’t wore out, like the back of the pant legs, ’cause the knees mostly be wore out—we pick the cotton on our knees.”

Dramatic colours, bold, abstracted designs and free-spirited inventiveness defined quilts of the 1970s era, as makers combined traditional motifs and techniques with innovative approaches to pattern. Crazy quilt styles were particularly popular as they allowed for greater creative freedom and meant quilters could use any pieces of fabric to hand rather than having to buy in a specific type. Many makers were inspired by avant-garde and Modernist abstract art, exploring the same optical effects of colour, shape, texture and pattern, as seen in Marsha McCloskey’s Paul Klee influenced designs of the 1970s.

Cotton was scarce at the time and most quilters had to make their designs from a thick polyester double knit, which was harder to work with and made a heavier, denser end product. But some quilters went to great lengths to hunt out pure, 100 % cotton for a true authentic feel. Much of the equipment that is used to make quilts today was simply not available at the time, including, cutting mats rotary cutters and computerised long arm quilting machines, so it truly was a back to basics era. Quilt templates were made with cardboard or sandpaper, while fabric pieces were cut out with scissors. The final applique and quilting was entirely stitched together by hand, taking weeks, months or years of hard work.

Much has changed since then, but this era was undoubtedly a moment of profound and long-lasting change which continues to influence attitudes towards making not just quilts but many other forms of art for our homes or gallery spaces. Volckening is quick to point this out, arguing, “It was a fascinating time …. which cultivated the roots of modernism.”

Mary Queen of Scots is one of the world’s best known and instantly recognisable icons, with her austere clothing and heart shaped headdress. Crowned Queen of Scotland when she was less than a year old, her tumultuous life with filled with uncertainty, but the way she dressed, from her early years in France, to her…

Fashion, Politics and Power: Famous Monarchs and Their Clothing

“Early in history, it was important to impress your subjects with your wealth and your bling.” Lucy Worsley, Historian Grand, eccentric and flamboyant, Monarchs have embraced the wondrous power of fabric and clothing since medieval times. From dresses weighed down with jewels to suits covered in gold lace, theatricality and drama has defined the clothing…

Woven with the Past: Quilts and Contemporary Art

“Quilts stimulate memories of warmth, security and home, yet their layers can also conceal hidden histories and untold stories.” Sue Prichard, Curator of Contemporary Textiles, the V&A, London Quilts hold a special place in today’s culture, adorning the walls of museums and galleries as totemic mementos of the past. From abstract patterns to personal or…

Stitching a New World: Quilting in the American Colonies

“The history of America can be seen in the history of quilts.” The National Monument of America When pioneers set off for a new life in the United States, many carried with them the great tradition of quilting. Each family came to the New World armed with comforting quilts, some purely practical, others patched together…