SHOP LINEN
Home LIFE LOVERS Have You Ever Had All the Odds Stacked Against You?
Return to Previous Page

Have You Ever Had All the Odds Stacked Against You?

Not too long ago I got a hold of a very passionate creator, Pedro Altamirano. At 68 years old, Pedro has been doing embroidery for over 30 years, has work in all seven continents, and has no plans on stopping any time soon!

Since the Summer of 1977, Pedro Altamirano has focused his embroidery talent on crewel embroidery. He began his hobby during the summer between receiving his BA and Masters Degree. However, he first began regular embroidery as early as 1955, using floss rather than thread.

Taught by his mother, Pedro had an early start in the craft however it was cut short because, as according to Pedro:

“œI quit because in 1955 boys did not do embroidery so I quit after much teasing!” 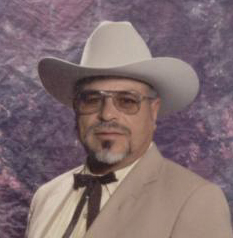 However, that didn’t stop Pedro for too long, and in 1977 he put his talent and creative vision to use once again. Since 1977 Pedro has done over 350 embroidery projects, at first working off structured kits that he would sell, before starting his unique idea: giving away his embroideries to people all around the world, for free!

His idea started when he moved away from working only on structured kits, and began making his own line of embroidery pictures and pillowcases using famous cartoon characters. Of the 350+ embroideries he has created, he has given out over 250 of them, for free, to people he considers very special to him.

Pedro began giving away his cartoon characters because he didn’t want to sell copyrighted items, however it soon became a personal choice to not sell his hard work. To Pedro, each stitch is a reminder of his hard work and something that nobody can put a price tag on.

Although he has been approached to sell some of his work, Pedro remains dedicated to give away his work only to those who have made a special impact on him, people he considers special and sometimes for a special occasion.

In 2005, a pen pal of Pedro’s pointed out to him that he had embroideries on four of the seven continents of the World! At the time, there was a Betty Boop in Portz, near Koln in Germany (Europe) , a Mickey Mouse pillow in Chile (South America), a Phantom in Australia and the Rescue Basset Hound in Indiana (North America).

In May 2006 a Petunia Pig pillow was safely delivered to China, and in mid October another Mickey Mouse pillowcase arrived in Kenya, Africa. This left only the Antarctic without one of Pedro’s embroideries!

However, with the arrival of a framed Chilly Willy in Antarctica in December 2006, Pedro now has an embroidery on every continent of the World!

Pedro begins his embroideries by scanning cartoon characters into his computer, then printing them out 8×10 inches in size. He then traces the design onto plain paper, reloads it into his computer and then prints 3×5 inch prints onto plastic to put into an overhead projector.

He then makes the character templates around 15 inches tall and transfers the template onto a piece of linen using a light box. Finally, he mounts the linen on to 21×15 inch stretcher bars he makes himself out of clear pinewood. Pedro’s landlord makes his frames, and his oldest daughter Sherrin makes the pillows. 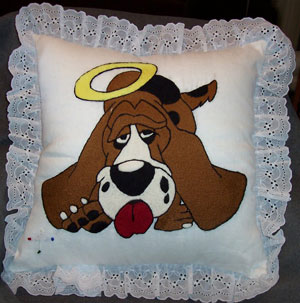 Pedro found Fabrics-store.com around 7-10 years ago, when he couldn’t find suitable linen locally for his embroidery projects. He began buying linen online and on the phone from Fabrics-store.com, and still continues to do so! In fact he’s been so happy with our quality linen, he doesn’t look anywhere else:

“œI have been treated so nice by everyone I have spoken with I have not looked elsewhere for my linen.”

Although each piece of artwork is unique, Pedro’s signature is a White Cross symbolizing his faith in God and Red, White, Green and Blue French knots that symbolize his dual heritage of Mexican and American.

“œI feel that God has truly Blessed me! I have been doing crewel embroidery for 31 years and my hands and eyes are still as good as ever! “œ

It is always so refreshing to gain even a little bit of insight into the personal lives of my customers. By hearing from them even through a short e-mail, it gives me inspiration to share their stories with the rest of you!

I hope you found Pedro’s story inspiration and insightful, and if you want to leave a comment just scroll down and please do so.

If you want to share your own story, then please contact me by entering here and filling out the “œContact Us“ form.

Other posts by Nikolai Karpushin