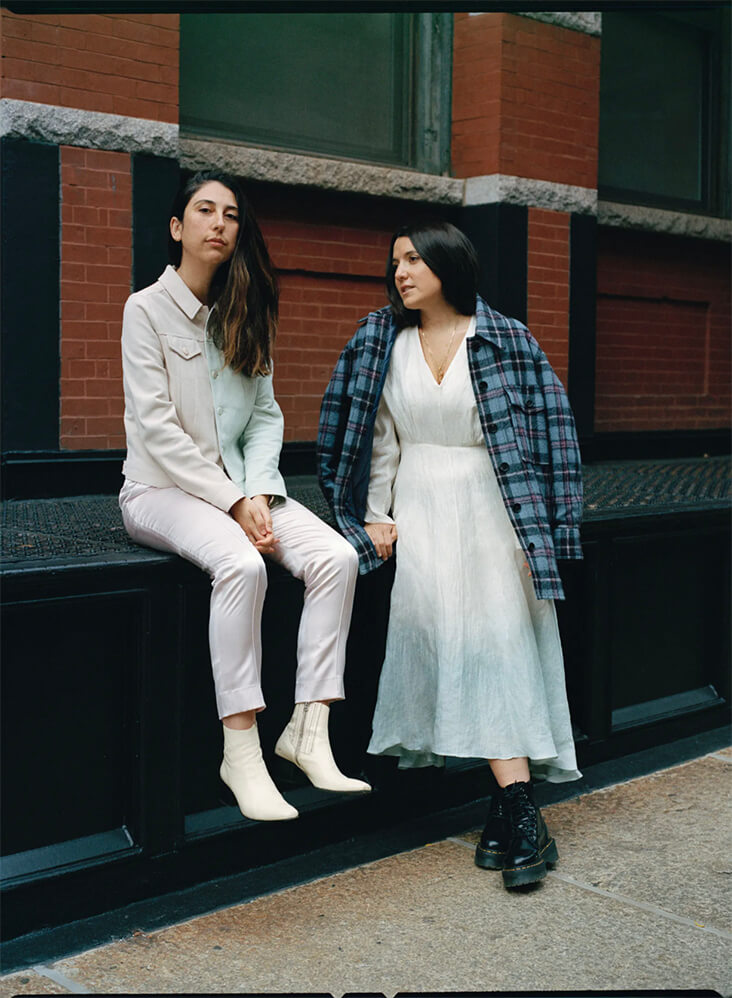 Natalie Shirinian and Elizabeth Baudouin are the force behind NES Creative, a communications agency in New York that represents some of the most in-demand designers of today, including lighting and furniture studio Apparatus, and jewellery designer Yolande Batteau. Partners in life and in business, the duo have two lavish and beautifully designed homes they move between, one in L.A. and the other in New York. Both these domestic spaces are treated as playful arenas (and perhaps even works of art in their own right) where a range of networking events and exhibitions are hosted, encouraging an open and creative exchange of ideas between the designers they represent. “We’re about being a community of creatives where everyone can come together and inspire each other,” says Elizabeth.

The couple who met through mutual friends in New York in 2014, were married last summer in Beverly Hills. Both were initially working in different fields before merging. Natalie came from a background in film and public relations before gradually moving into the design world. In 2010 alongside a couple of interior design friends, she founded NES Creative. At the time, Elizabeth was working as a writer, producer and music consultant and she continued down this path for the first few years of their romantic relationship. 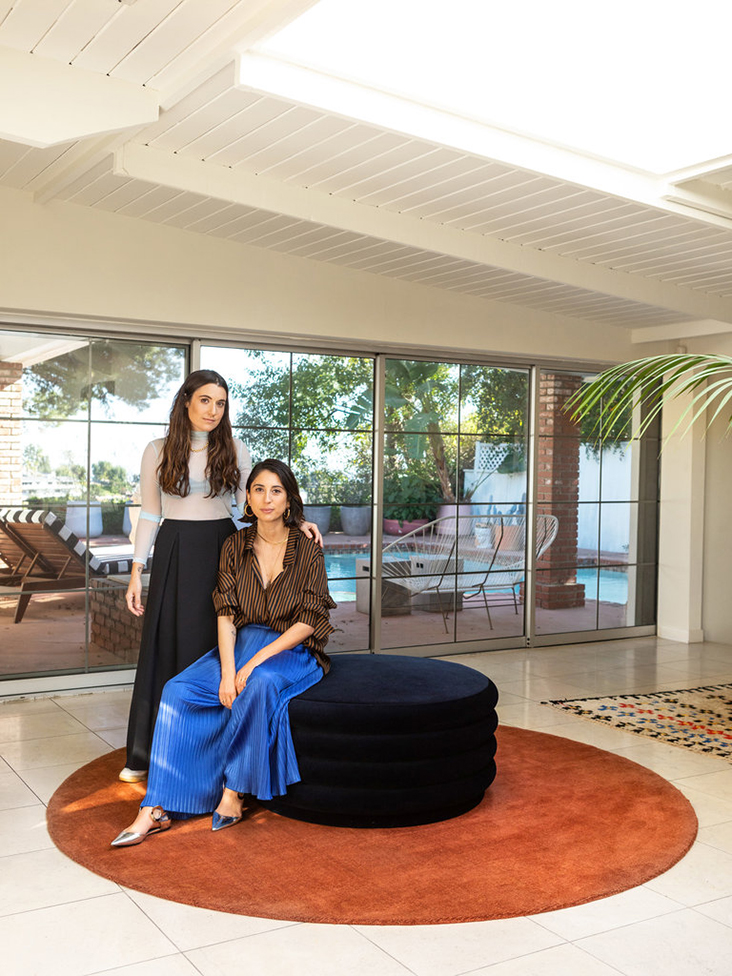 Natalie Shirinian and Elizabeth Baudouin at their Bel- Air home

This meant when they did eventually begin working together, both had their own individual interests that they could bring to the table. Natalie explains, “Working with one another works well for us because we allow our individual strengths to shine.” But she also points out that each of them continues to pursue their own individual interests outside of NES, adding, “We also make sure to give each other space to create our personal endeavours outside of the creative agency.” More recently, Natalie has expanded her interest in film with NES Films, an L.A. based film production company whose enterprises include documentaries and fictional stories about life, while Elizabeth continues to work as a novelist and journalist, and is completing an autobiography about her coming-of-age years in an alternative family in New England. Natalie notes, “As with anything, communication is key and operating from a place of we are always a team. We find the balance in making sure over everything the relationship comes first. After 7 p.m. our project conversations stop and we focus on each other.” 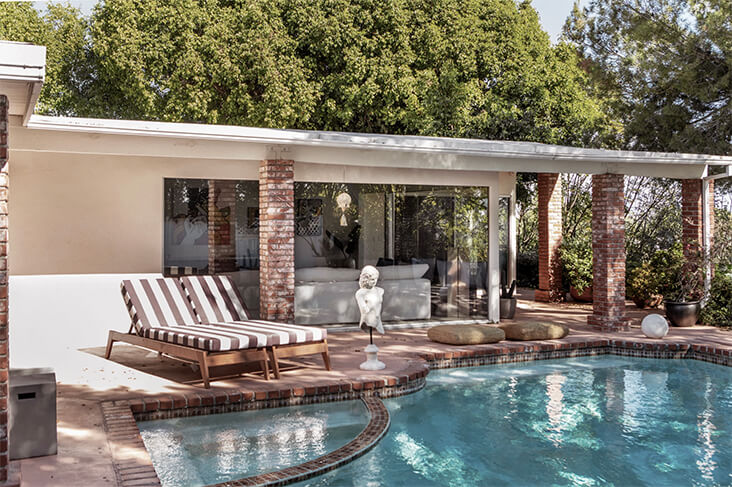 Perhaps the most vivid visual embodiments of Natalie and Elizabeth’s collaborative power are their two homes, which follow in the legacy of Charles and Ray Eames as spaces for creative interchange and endeavours. In Los Angeles, Natalie and Elizabeth transformed a mid-century ranch house into a living art gallery, filled with eclectic, vibrantly coloured works of art and striking design pieces made by their friends and clients, as well as curious oddities found in thrift stores and travels across Europe and the United States. It is as much a showcase for the talent they support as it is a homely living space to live, work and unwind. “Being surrounded by art encourages you to make more of your own,” says Natalie. “This home is a great space to create.” 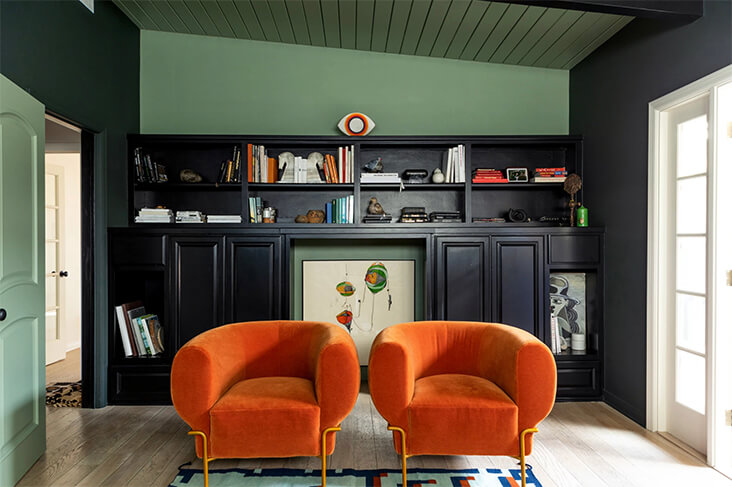 In the office, orange Madda club chairs by Michael Felix pop against dark green walls with mint accents. On the far wall is a drawing by the artist Gloria Noto, who first introduced Baudouin and Shirinian. (Credit: New York Times Magazine)

Their downtown New York loft, by comparison, has an entirely different feel, responding to the urban environment with a sleek, minimalist aesthetic that includes dark walls, printed wallpaper and accents of marble and brass. Lighting was put in place by their friends at Apparatus, while a series of abstract, minimal wall coverings were created by another client, the artist Yolande Milan Batteau. Elizabeth notes how the rest of their New York home was created through an arduous push-pull of ideas that eventually clicked into place, observing that, much like the ethos of NES Creative, “I think it’s a nice blend of both our personalities.”