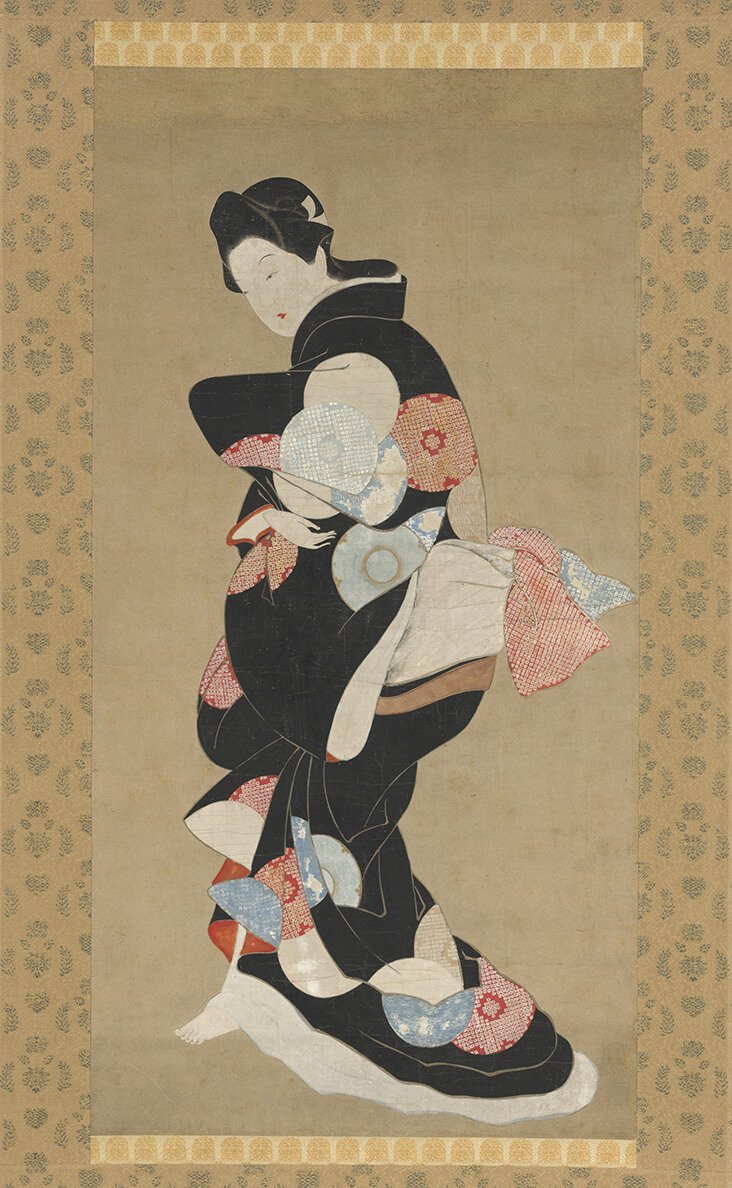 Japanese ‘ukiyo-e’ paintings and prints are one of the world’s richest treasures, illustrating the complex diversity of Japanese life with a bold and instantly recognisable language. A popular strand of Japanese culture from around 1670 to 1912, ukiyo-e, or ‘pictures of the floating world’, illustrate the development of Japan’s bustling city centres as they became playgrounds for the wealthy merchant classes. In their day, these artworks were the equivalent of magazines or advertisements, appearing as posters, billboard signs and book illustrations that showcased the most radical fashion and fabrics of the time, influencing the nature of popular dress. Looking back today, they offer a fascinating insight into the history of Japanese textiles and fashion, particularly since so few fabric samples have survived from this period. In this new series of articles, we will look at the incredible evolution of fashions and textiles in ukiyo-e paintings and prints through the ages and their significance in Japanese society.

Ukiyo-e paintings and prints became popular during the Edo period (1615-1868) and remained so until the end of the Meiji period (1868-1912). Because they cover such a broad timespan these artworks are hugely varied in content through the ages, illustrating an array of subjects including ‘beauties’, actors, courtesans, landscapes, street scenes, folk tales and erotica. The evolution of ukiyo-e prints can be divided into roughly four significant schools, each founded by a leading artist who established his own workshop: The Hishikawa School, The Torii School, The Utagawa School and The Katsukawa School. 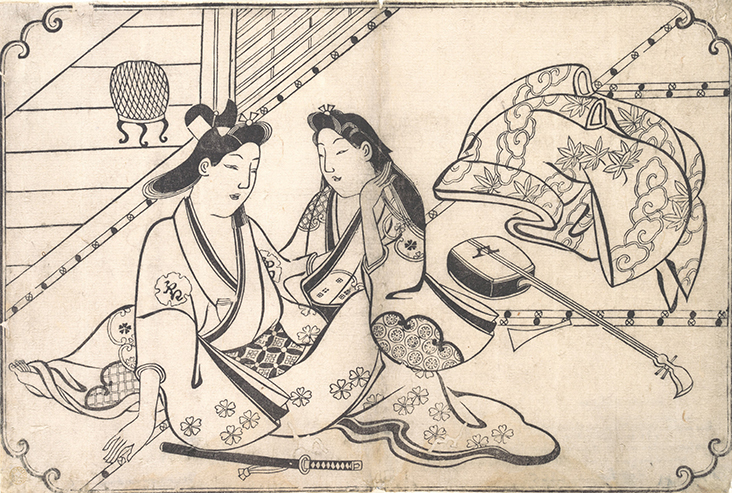 The Hishikawa School of ukiyo-e is generally recognised as the first, emergent phase of the style, led by the pioneering artist and illustrator Hishikawa Moronobu. It was Hishikawa (1618-1694) who first popularised woodblock printing in Edo, recognising that the medium allowed him to produce larger numbers of works at a cheaper cost than his hand-painted scrolls, and to disseminate his ideas into the public eye through the production of posters, book illustrations and prints for sale. Hishikawa’s intricate illustrations are hugely varied, recording daily lives, landscapes, historical scenes and popular stories and fabric is almost always a vital ingredient, adding references to the popular fashions of the time he was living, which is perhaps no surprise since he was trained in his family’s textile business before becoming an artist. Moronobu was a hugely influential figure who ran a busy studio, and many of the artists who trained with him would continue in his legacy. 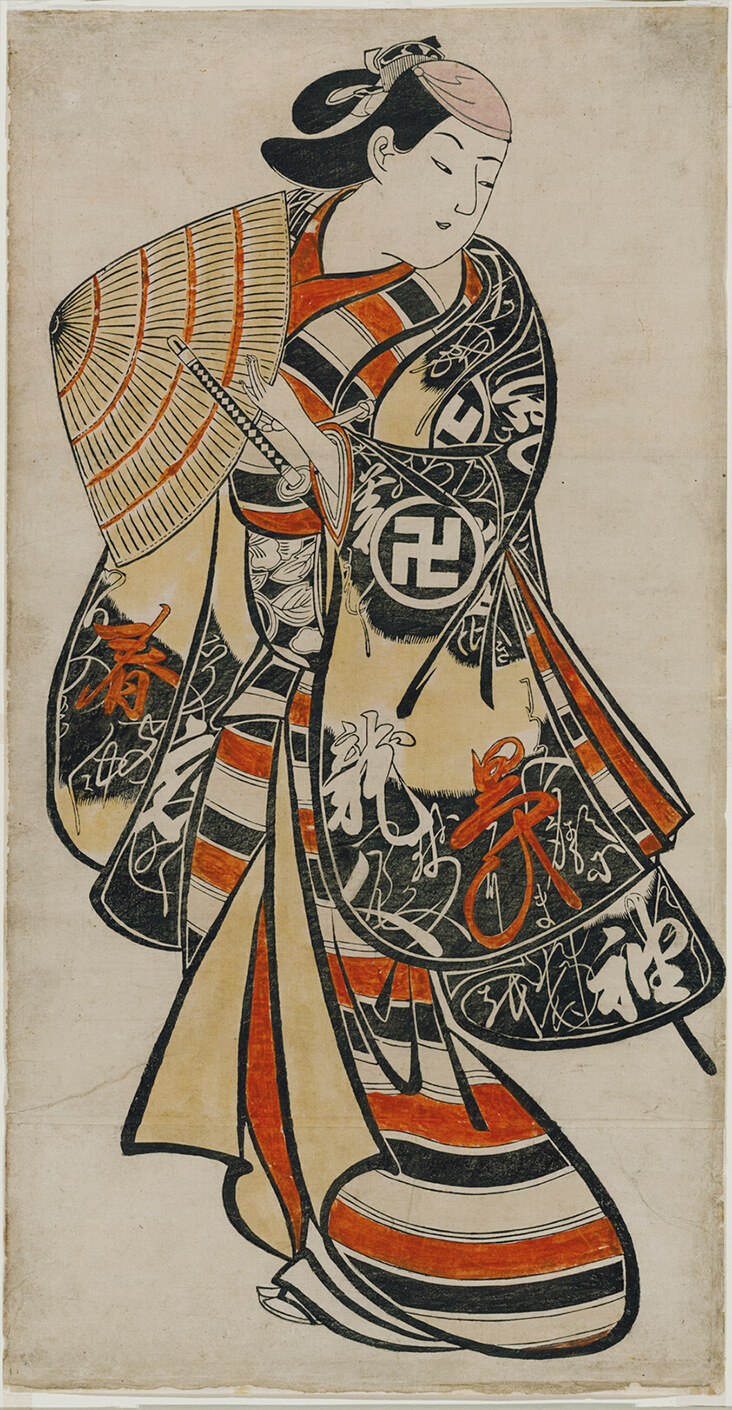 Torii Kiyonobu, The Actor Takii Hannosuke as an Effeminate Youth, 1707, image courtesy of The Art Institute of Chicago

The Torii School of ukiyo-e prints began with Torii Kiyonobu (1664-1729), and his father, the kabuki actor and billboard painter Torii Kiyomoto. Together they founded a successful business in Edo that produced a huge array of prints and paintings, including billboards, posters and promotional material for the kabuki theatre illustrating actors dressed for the stage, with dramatically swirling clothing in vibrant, eye-catching prints, and energised, dynamic poses. The clothing actors wore for stage subsequently became popular for people on the streets of Japan, proving how widespread and powerful the language of ukiyo-e had become. 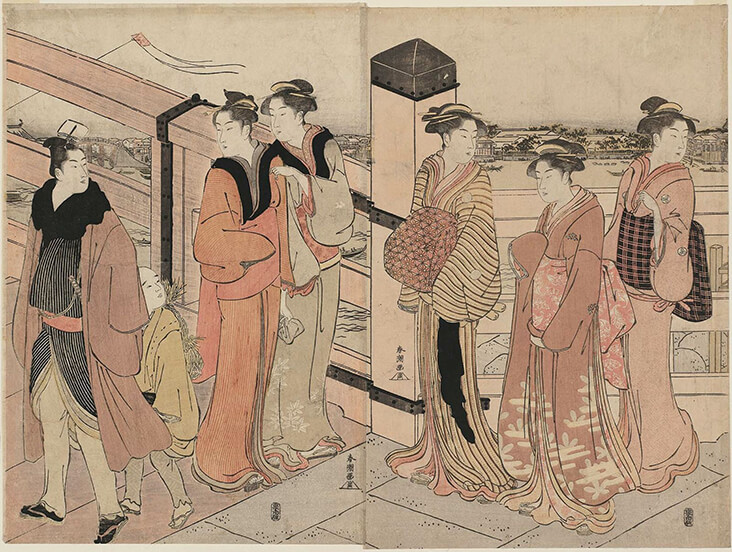 Japanese artist Miyagawa Shunsui (1726-1792) led the Katsukawa School of ukiyo-e, changing his name to Katsukawa as a young adult. Much like the Torii School, the Katsukawa style focussed on the portrayal of actors for posters and advertisements, but it introduced greater levels of realism and less stylisation, creating a believable sense of character and personality into subjects. The Kastukawa School also encouraged the illustration of scenes from ordinary life, such as people shopping or socialising on the streets of Japan, dressing his characters in the latest textile trends and patterns.

The Utagawa School of ukiyo-e prints was founded by Utagawa Toyoharu (1735-1814) and is widely recognised as the most significant phase of the ukiyo-e movements, with far ranging influences that spanned across Japanese society and lasted right through into the Meiji era of the early 20th century. Utagawa’s school focussed predominantly on woodblock prints, which featured elements of Western and Chinese inspired perspective and an array of bold costumes in dazzlingly bright colours and prints. Utagawa often made illustrations featuring high-class courtesans in intricate, elaborate costumes and these, in turn, came to inform street styles in Japan. This era was also a significant period when Japanese visual culture spread throughout the West, informing the nature of fashion and art in a way like never before, an influence that has remained to this day.