“The best of these designs are so eye-poppingly gorgeous that it’s hard to know how to begin to account for them. But then, good art can never be fully accounted for, just described…”

Brilliantly eccentric and ludicrously inventive, the multi-generational quilts emerging from Boykin, colloquially known as Gee’s Bend, in Alabama are now recognised as some of the finest art works of all time. Hailing from a small rural region of Alabama, the Gee’s Bend community is entirely unique in its tradition for sharing an insular, vernacular creative language of folk art through three or four generations of women, one that is still very much alive today. Now held in museum collections around the globe, these quilts tell a remarkable story of endurance, perseverance and ingenuity. Their playful geometric language has been compared with the creativity of jazz music, and particularly abstract art, as Alvia Wardlaw, curator of Modern and Contemporary Art at the Museum of Fine Arts, Houston observes, “There’s an improvisational range of approaches to composition that is more often associated with leading 20th-century abstract painters than it is with textile-making.” 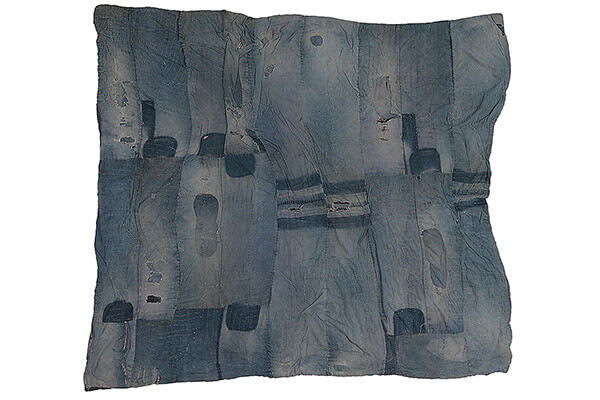 The story of Gee’s Bend quilts can be traced back as far as the early 1800s, when landowner Joseph Gee established a cotton plantation in the Alabama region with a community of African slaves. The farm was later sold to Mark H. Pettway, who established an even larger group of slaves to work the land, forcing them to take his name. Most of today’s Gee’s Bend community are descendants from this painful past, with many still bearing the name Pettway. After the abolition of slavery, many African Americans continued to work for Pettway as sharecroppers within the region. 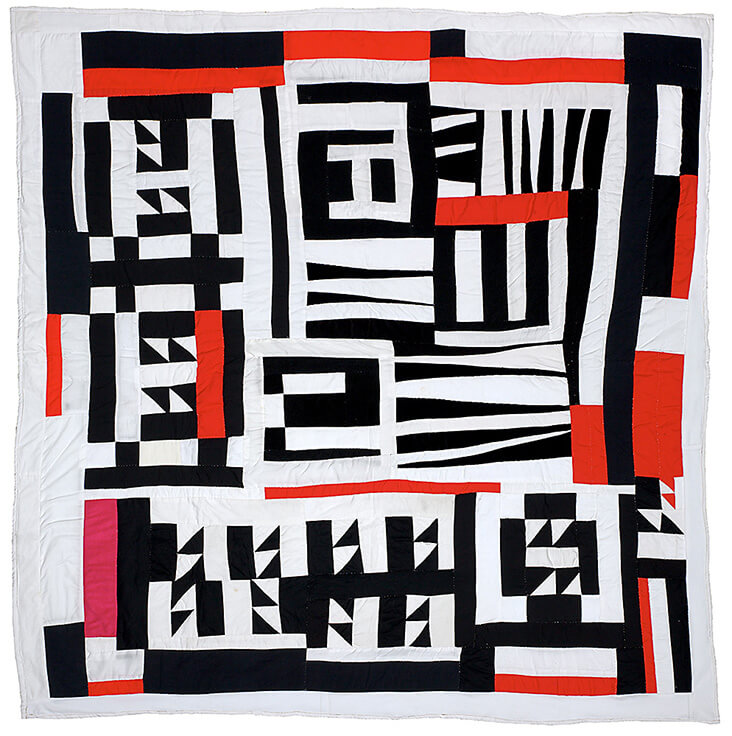 Quilting was a necessity for warmth amongst these African American communities who lived in unheated shacks throughout this period of change, with many integrating the traditions of African textiles into their designs. From one generation to the next, a highly distinctive approach gradually emerged from the area, as makers found endlessly creative ways to revive old scraps of clothing and bedding. When the Great Depression hit in the 1930s, cotton prices plummeted and Gee’s Bend communities were plunged into abject poverty. These times of extreme hardship led to the production of ‘workwear’ quilts, made from strips of worn denim, arranged into subtly nuanced repeat patterns that carry with them the spirit and strength of human endurance. This tradition has remained a popular strand amongst Gee’s Bend makers, as contemporary makers Emma Lee Pettway and Loretta Pettway demonstrate with their playful and experimental designs. 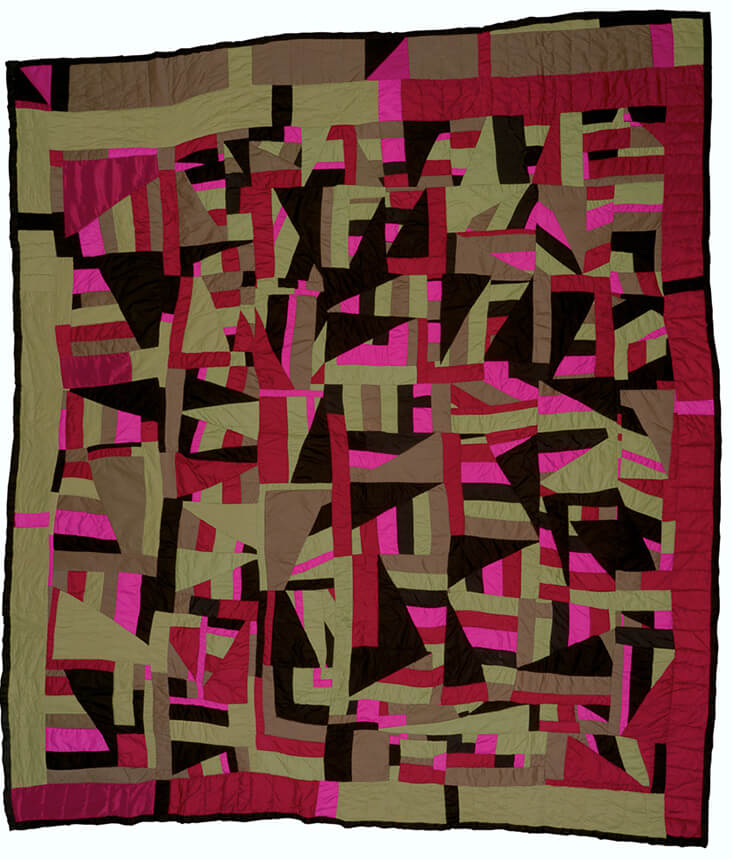 Eventually the government stepped in to assist with the area’s extreme poverty, establishing a co-op project to sustain the area’s inhabitants, one that allowed African American’s to become landowners for the first time. Communities slowly began to flourish and many of the region’s most celebrated quilts were made during this time. A particularly distinctive improvisational approach to quilting emerged, driven by the emotions or desires of their maker, also known as ‘my way’ quilts. These were often abstract in design, combining shimmering, kaleidoscopic arrangements of colour and pattern that gave once abandoned scraps an entirely new lease of life. Girls were taught skills in making and design from mothers and grandmothers, while finding room to bring their own creativity and personal interpretation into their designs. In more recent times, Mary Lee Bendolph’s bold, playful patterns reveal this endlessly inventive spirit of adventure and play. 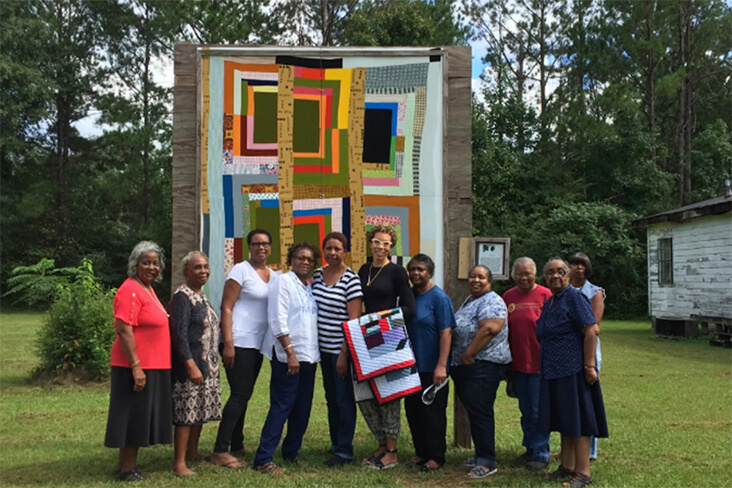 Members of the Collective pose with Amy Sherald (holding a quilt). Behind them is a painted mural based on a quilt Mary Ann Pettway’s mother made. Alex Ronan/The Outline

Some members of Gee’s Bend quilting groups joined the Black Belt Alabama Freedom Quilting Bee Cooperative in the 1960s as a way of generating income for their families, a lucrative enterprise that led to booming sales in New York City. On the back of this success several Gee’s Bend quilters established a deal with Sears to produce a series of corduroy pillow covers. Despite the strict limitations of their brief, makers found surprisingly inventive ways of bending the mould, while many brought leftover scraps of cord home to reinvent into new works of art.

By the 1990s quilting was a dying art in Gee’s Bend, with only a handful of practitioners still pursuing the age-old craft. But art historian William Arnett recognised the extraordinary talent of these makers and was instrumental in bringing their art out into the wider population with a series of high-profile museum exhibitions. Since this time their acclaim has been on the rise, inspiring generations of quilters old and new to resurrect the community traditions. Their astonishing designs from throughout the generations are held in the Whitney Museum of American Art, Philadelphia Museum of Art, Metropolitan Museum of Art, along with numerous others, and lauded as some of the most important works of American modernist art in existence. American painter Amy Sherald paid a fitting tribute to their legacy in her portrait of Michelle Obama, dressing the former First Lady in clothing inspired by Gee’s Bend quilt designs, mirroring their timeless and iconic interplay of geometry, order and chaos.

The car ferry at Gee’s Bend, May 1939. White county government ended the ferry service in the 1960s to discourage voter registration. The whole sewing community has been going crazy about Anna Allen’s Persephone Pants and Shorts pattern since its release in 2018. If you’ve been following some sewing blogs or makers on Instagram, chances are that you’ve already seen versions of it in your feed. It’s been so popular online that we just had to try…

Adaptive layering is something we feel can be practiced all year round. If you are looking for something light to throw on, or feel you need to add a little flair and colour to your warmer layers but still look effortlessly chic, then you probably need a duster! What exactly is a duster you might…

It is not a secret that we here at the Thread just love a good linen shirt in all its airy, free-flowing splendor! There is something so effortlessly chic about a crisp linen shirt on a sunny day. This is why when we find a pattern we like, we just need to share it with…

The 90s trends are making a major fashion comeback to the catwalks around the globe and back into our wardrobes. We seem to be combining some of our favorite old-school styles for a look that’s vintage, plain and simple. Fortunately, the Etoile Dress pattern by the French designer French Poetry checks all the boxes! The…

Even though hot sunny days are over, we thought we would share with you this great shorts pattern called the Orion Shorts by the French designer French Poetry. What makes this pattern so special you might ask? Well, the answer is simple: the perfect blend of comfort and elegance. The Orion shorts are a great…