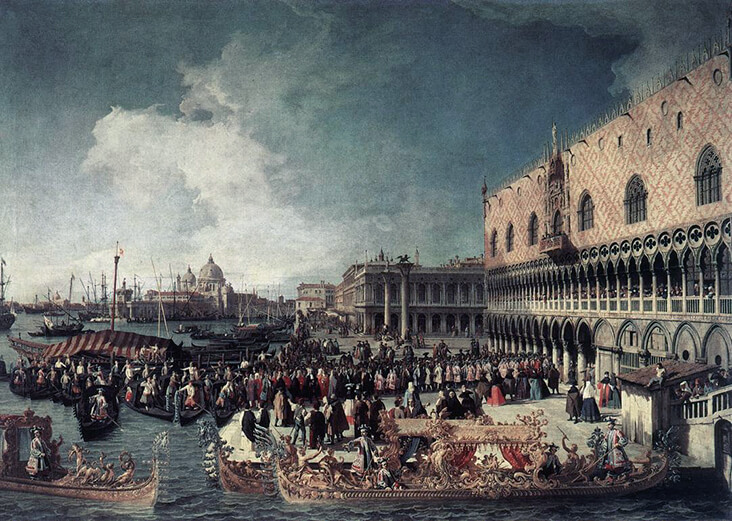 Reception of the Ambassador in the Doge’s Palace, c. 1730

The soft, shimmering blue of REED Linen floods Canatello’s expansive Venetian landscapes, transforming the floating city into a mesmerising, crystalline sea of light. One of the most famous landscape painters of all time, Canaletto made his name with fresh portrayals of his home city, painting wide open skies and metallic water in undulating shades of turquoise and silvery blue, set against golden stonework and gleaming white palaces.

The son of a theatrical set designer, Canaletto was born under the name Giovanni Antonio Canal in Venice in 1697. Both he and his older brother became apprentices to their father, assisting with the creation of painted backdrops for the Italian opera; through his father, Canaletto learned how to intensify brooding skies for greater emotional impact, a skill that would play a vital role in his later paintings. While visiting Rome in 1718 to help his father with the set designs for a series of Alessandro Scarlatti operas, Canaletto began making architectural studies of the ruined buildings around him, enjoying the simple act of drawing what he could see before him. He was also fascinated by the Roman tradition for painting vedutista, or large, panoramic cityscapes – such was their impact on the young Canaletto that he became determined to pursue a career as a painter.

Following his return to Venice, Canaletto began making drawings and paintings of the everyday people and scenery around him. Rejecting the tradition to paint from studies in the studio, Canaletto made much of his work almost entirely on location, a process which allowed him to truly soak up the lighting of his surroundings and infuse them deep into the core of his canvases. By the mid-1720s, Canaletto had begun the paintings that would define his oeuvre – expansive, panoramic views of Venice set amidst wide open skies and shimmering water. 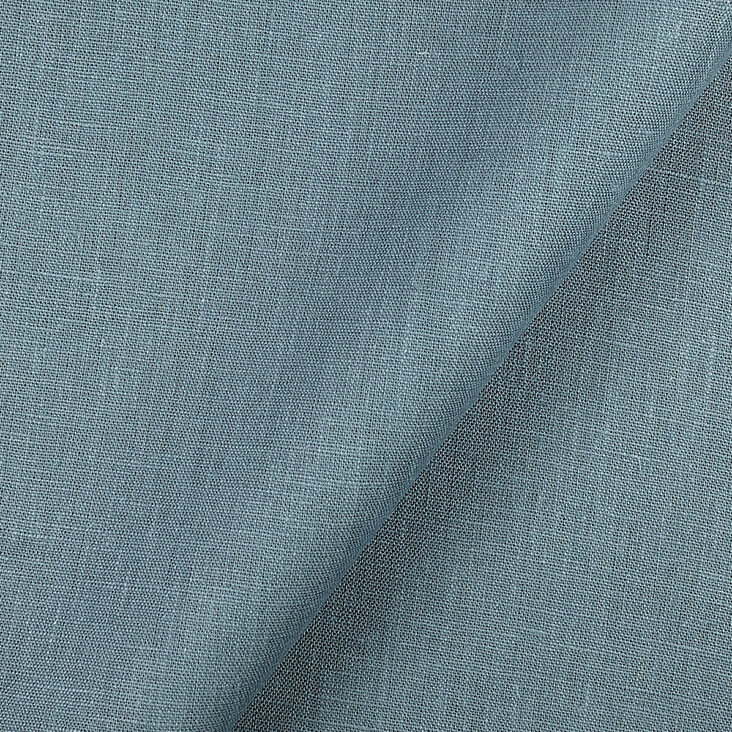 Grand Canal Looking Northeast from near the Palazzo Corner Spinelli to the Rialto Bridge, 1725, captures the city’s shabby elegance as run down gondolas draped in dirty cloths converge in the deepening shadows of twilight, casting long shadows across grey-blue water. A brooding, changeable sky hangs above them with dramatic suspense, slowly shifting from pale turquoise into the dusty blues of the encroaching evening. Reception of the Ambassador in the Doge’s Palace, 1730, portrays the city’s other resplendent side as dazzlingly ornate, golden gondolas, and the Doge’s palace are painted in exquisitely accurate detail, glistening in a caramel-tinged Italian light. A moody sky in rich, metallic blue hangs over the scene, bringing darkening drama and gravitas to an otherwise joyous celebration.

Canaletto’s mature paintings became increasingly detailed as he discovered how a camera obscura could help him achieve ever more precise architectural accuracy, projecting a view onto canvas which he could then trace around. But Venetian light was still the vital ingredient in his sparkling scenes, one which attracted a wide army of followers and buyers, particularly tourists looking for souvenirs of the landmark in the days before photography. The dramatically foreshortened View of San Giuseppe di Castello, 1745 reveals Canaletto’s mutual fascinations with linear perspective and atmospheric light; dusty red and brown buildings recede into the distance, painted with near-photographic accuracy, while overhead an almost cloudless blue sky speaks of raging sunlight, so hot it makes razor-sharp shadows across the scene. There is a colder, starker mood in Venice: The Grand Canal from Palazzo Flangini to the Church of San Marcuola, 1738, as a pale blue sky, shot through with white, casts clear, glassy reflections in the steely water below. Canaletto’s lifelong love affair with Venice is encapsulated here, as his vision of the floating city merges fresh, sunlit sky and molten water into one dazzling whole. Claude Monet was entranced by the polished sheen of water, observing with fascination how it could reflect sky and land on its glossy, undulating surface. The subtle metallic shade of HEATHER Linen allowed him to capture the cool freshness of this rippling water, with patches of lilac-tinged sky and cloud scattered across its constantly shifting…

In Giorgio Morandi’s elegantly understated paintings, closely toned shades of peach, cream and ivory nestle together and embrace one another with fleshy warmth. The blushing peach tinge of PRISTINE Linen was one he would repeatedly return to because it allowed him to infuse his canvases with the softly diffused glow of Italian sunlight, whether falling…

The warm, golden grey of DRIZZLE Linen has been in Californian artist Ed Ruscha’s armoury for decades, colouring sun-drenched rocks, pool sides and dry, parched grasses. His sleek photographs, prints and paintings feature bold motifs and punchy slogans that reflect the urbanised commercialism and luxury branding of American life with a knowing irony, particularly in…