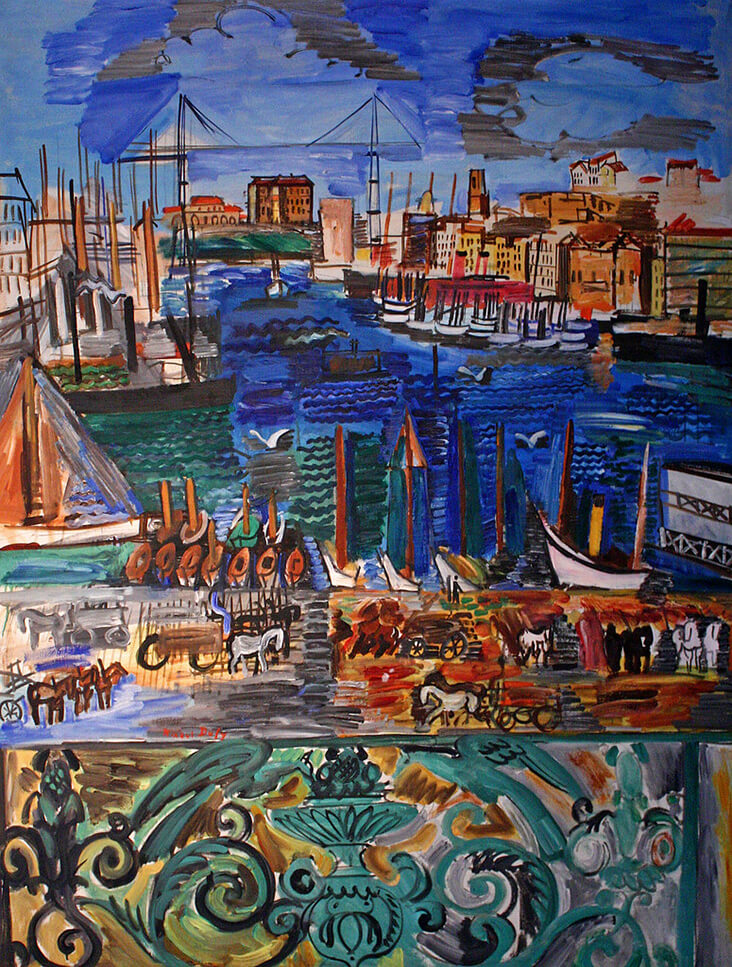 The rich, vivid hue of ULTRAMARINE Linen came to define French painter Raoul Dufy’s art, filling coastal scenes across the Riviera with the entrancing, deepening shadows of night. Known today as one of art history’s greatest colourists Dufy embraced a joyous, technicolour approach to art, colouring paintings, prints, ceramics and textiles with tones as fresh and sparkling as champagne. But blue was the one he revered the most, partly because it defined the marine light of France that he so loved. But he also observed blue’s inherent purity, noting, “Blue is the only colour which maintains its own character in all its tones…it will always stay blue…whereas yellow is blackened in its shades, and fades away when lightened; red when darkened becomes brown, and diluted with white is no longer red, but another colour—pink.” 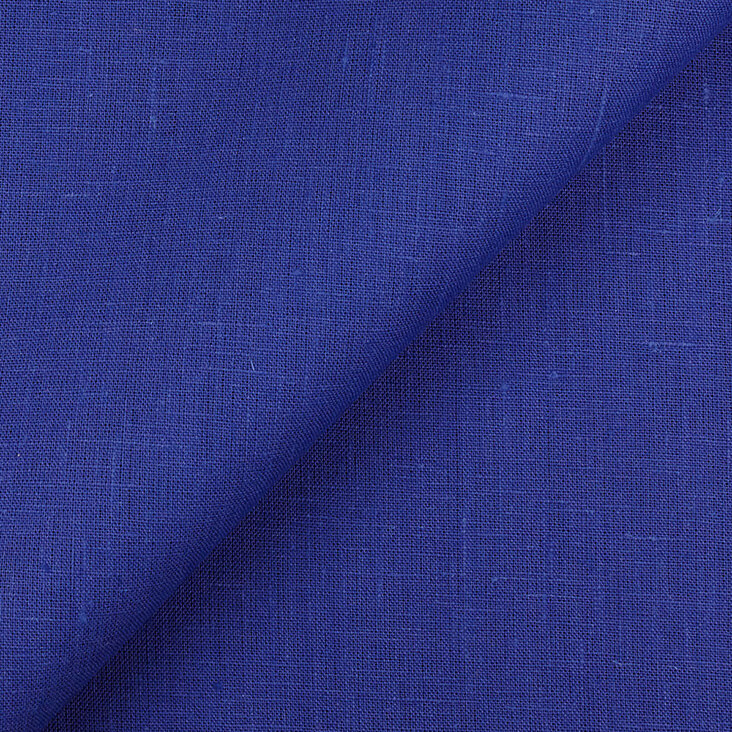 Dufy was born one of nine children to a poor family in Le Havre, France in 1877. After leaving school when he was just fourteen Dufy’s first job was as an office clerk with a coffee firm, where arrivals to the port of Le Havre containing potent aromas lit up his young imagination, investing in him a lifelong fascination with marinas and harbours. Dufy’s first taste of art came through sketching the wavering boats and flickering water here, a subject he would return to again and again throughout his career. From these humble beginnings Dufy moved on to evening classes at the École des Beaux-Arts in Paris, before earning a scholarship place to study full-time at the École Nationale Superieure des Beaux-Arts. There Dufy was taught by the Impressionist Léon Bonnat, who disapproved of Dufy’s radical, unnatural approach to colour.

Undeterred Dufy struggled on, but he initially failed to find recognition in his early career. A vital spark of inspiration hit in 1905, when Dufy first encountered the art of the French Fauves including Henri Matisse and Andre Derain. Finding a deep connection with their violent, explosive energy and heightened, exaggerated hues, Dufy quickly adopted a similar approach to painting, capturing views all across the Mediterranean coast with a light, carefree language and emotionally resonant colour. By the 1920s Dufy had found his signature style, painting loose, airy lines and washes of intensely bright colour onto a white ground, allowing their luminosity to shine through. 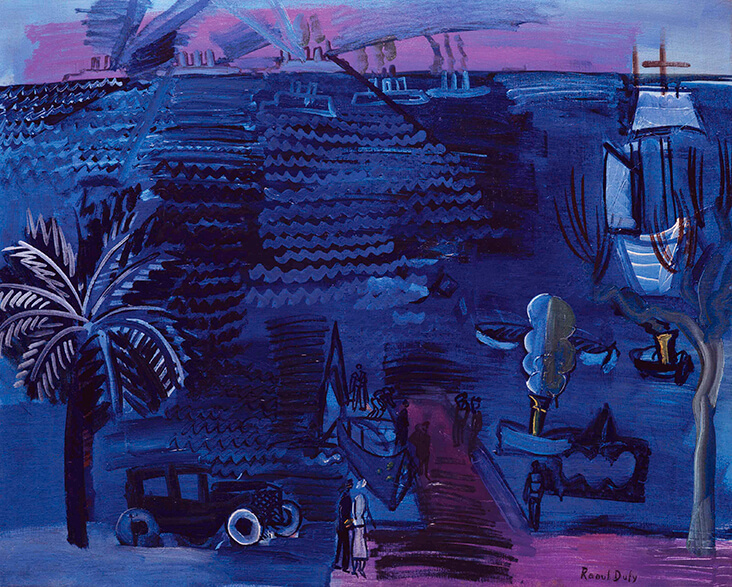 As his career progressed and gained momentum Dufy found himself naturally drawn to subjects conveying the lighter, joyous side of life, particularly scenes of splendour and spectacle such as horse races, regattas, concerts and marinas filled with noisy, clanging boats. The French Riviera was his favourite spot, where he travelled along Nice, the Bois Du Boulogne and Deauville to paint the wide-open views and mesmerising blue water surrounding him. The dazzlingly bright Sight of Marseille, 1925 captures the bustling life of this busy port town in a prismatic myriad of colours as horses and carts trundle along past a noisy jumble of houses. But rich ultramarine blue is the standout feature, forming rippling rivulets of movement across the horizon that echo in patches across the darkening sky. 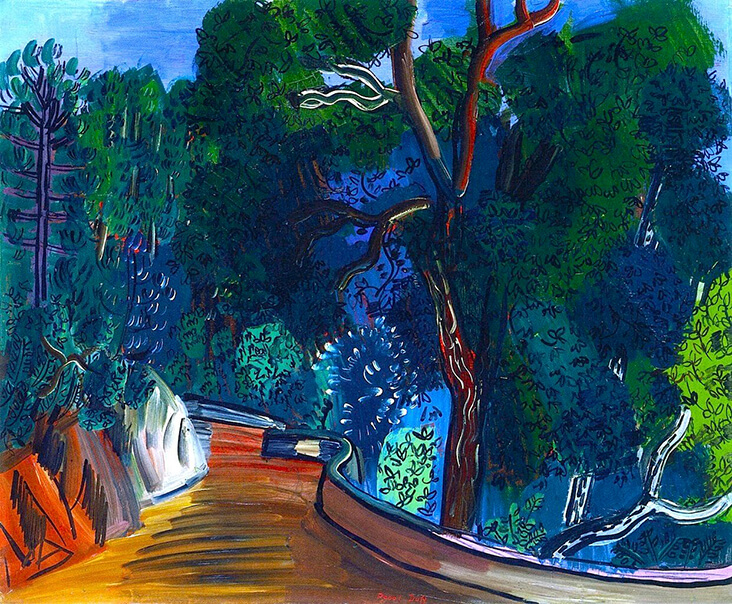 In the later La flotte à Villefranche, 1926 the sun has truly set as moonlight washes intense, deep shades of aqua and indigo blue across the entire scene, capturing the mysterious excitement of a balmy summer night. Cork Trees in Vallauris returns to daylight, but Dufy’s trademark dark blue rustles through shadowy patches in the bunched leaves, lending them the motion and fluidity of water. By contrast, The Bay of Sainte-Adresse, is still and silent as sleepy boats and houses twinkle amidst flat, moonlight blue water. The sky is awash with a streak of vivid dark blue that bleeds slowly from daytime aqua into the pockets of night, a colour that ripples, dances and darkens the rooftops beyond.