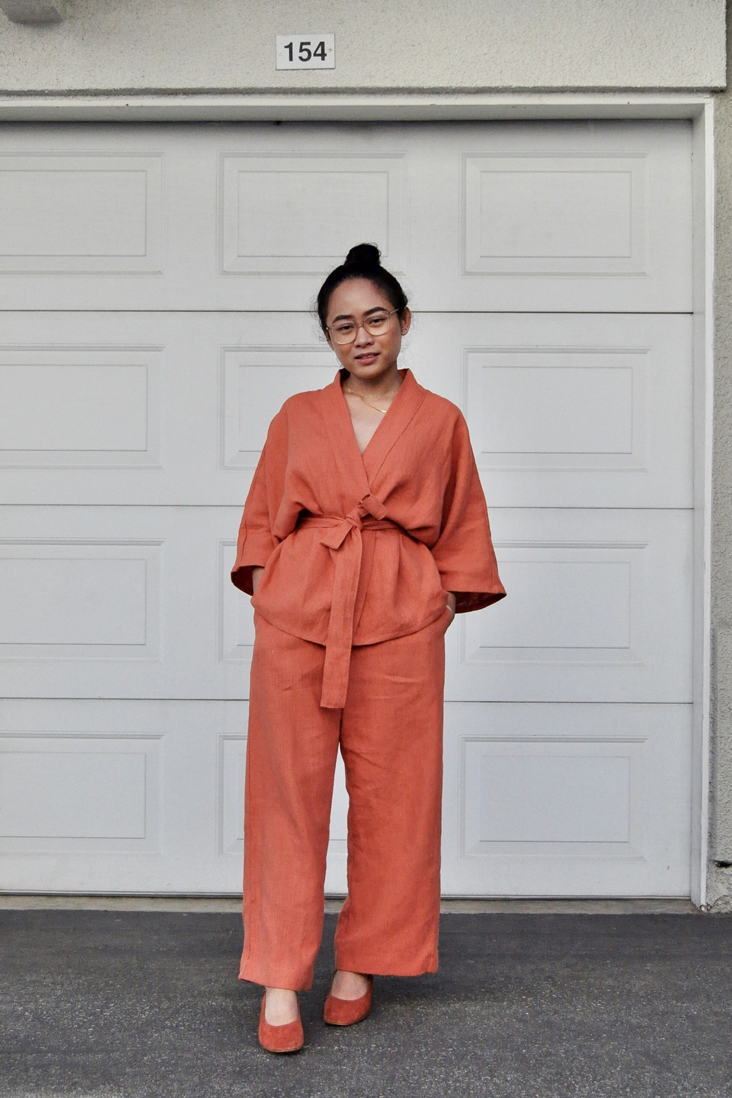 The Akira collection consists of two garments, a cardigan or top and a pair of pants or capris. There are multiple variations you can get from each type of garment, making this pattern very versatile. After mulling over which ones I wanted to make, I decided on cutting a pair of capris and the belted top. The effortless design of the pieces makes each one of them totally wearable and very easy to match with other pieces in my wardrobe. As with other Fabrics-store’s printed patterns, I cannot emphasize enough the clarity of the instructions. I would recommend the Akira collection to any beginner sewist who wants staple pieces in their wardrobe.

I chose the 4C22 heavyweight weight linen in Sanguine for this project. The heavyweight 7.1 oz linen is a long-time favorite fabric of mine for garments. The weight is great for all-day wear because the fabric is breathable for daytime use and has enough thickness to provide substantial layering at night. I use this fabric for tops, pants, and dresses. It’s a rather stable fabric to sew with, while still having a nice drape over the body. I laundered the fabric using hot water and machine-dried it on high before cutting to prevent any future shrinkage.

I’m 5’1” with a waist size of 26 and bust size of 32, which landed me approximately on size 2 – the size I cut for both the top and capris. I did not make any major modifications to the pattern besides taking some length out from both pieces, which I do for every sewing pattern to accommodate my height. First, I took out 6.5” from the top to create a cropped look. Second, I added 0.5” to the hem allowance, making it a 1.5” deep hem instead of 1 ¼”. Originally, I cut the pattern pieces to make the capri length bottom, but I ended up keeping it at a pant length since the pieces allowed me to do so. 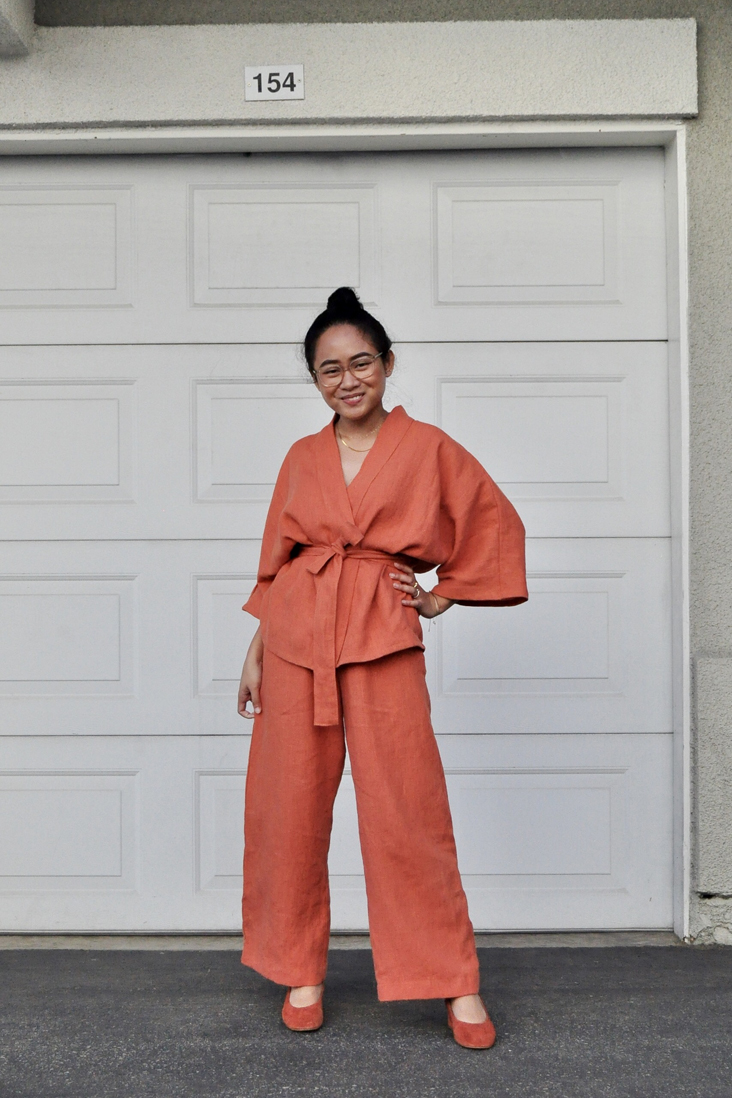 There are a few other things that I did during construction that differ from and add on to the instructions. As mentioned above, I had to modify the length of my patterns, so I left hemming to the end, instead of doing that before sewing the crotch. Because I shortened my top by 6.5”, I had to ignore the suggested belt loop placement and instead place the loops further up on my actual waistline. I stay-stitched the front and back necklines to prevent them from stretching. I knew I would be doing french seams for the top, so there would be a lot of handling done, and I did not want the pieces that were cut on a slight bias to “grow”. Finally, I interfaced the wrong side of where the button holes for my drawstring were located to give the areas more structure.

I hope you enjoy seeing these pieces as much as I do. Working with Fabrics-store linen is always enjoyable, and their linen is a dream to sew! 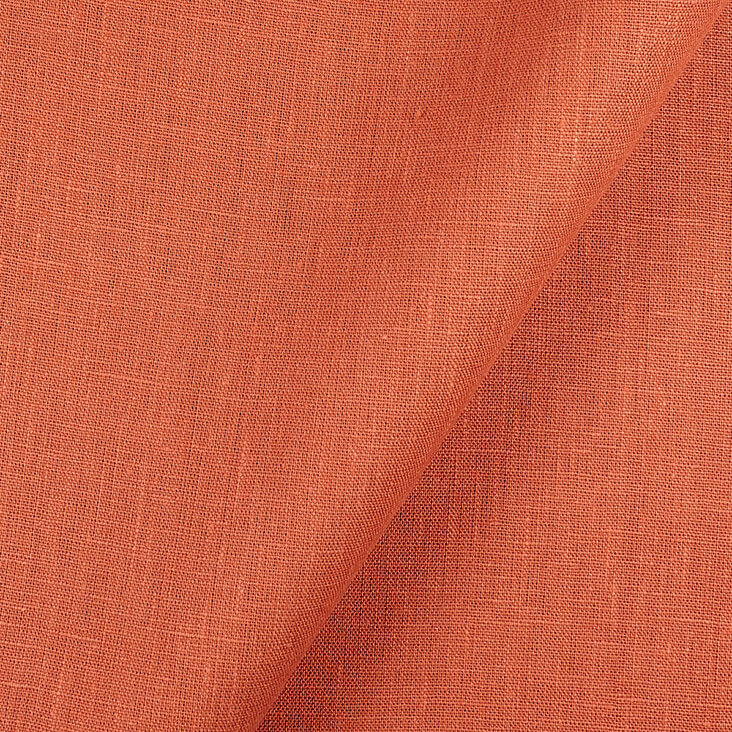 Other posts by Gyasti Averia

Adding a classic fitted trouser to your wardrobe is always a good decision. These pants definitely have all the details of a classic garment worth adding to your collection. I did not have any white pants and I’m so pleased to have added the Riva Pants to my fashion options. I hope you enjoy the…

A couple weeks ago, my family and I took a quick trip to San Francisco to visit friends and pre-plan our wedding, which will take place inside the awe-inspiring San Francisco City Hall. My fiance and I both lived there during college over a decade and half ago, so we figured it would be meaningful…

The Capucine robe is so lovely! I’m excited to share why. Let’s start with the fabric choice that made this super fun! The pattern suggests woven medium weight linen 55” width and all the photos in the instructions are made with traditional texture linen but you MUST consider the linen/cotton waffle fabric as an option…

The Riva Dress. Wait!? The Riva Pattern doesn’t come with a dress option. No, it doesn’t, but it CAN. I like my FS Zina Shirt dress so much that I thought, why not try making a Riva Dress option as well. I saw the potential that seemed like a pretty simple alteration so I took…

I’m back today with a fun, juicy hack for you. I recently made a Nico bias cut dress and admitted to you… I’m not good with making basics. I used the Nico dress pattern to make the camisole and couldn’t resist adding a little of my own flare with a layered tulip-style back hack. This…