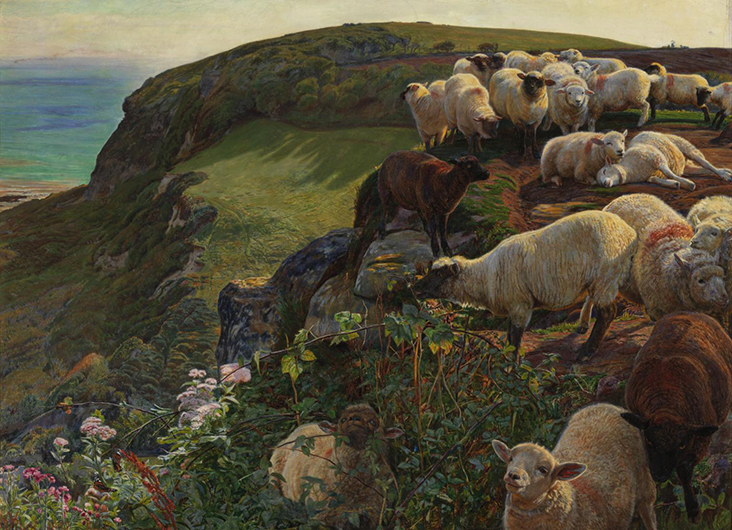 Greens from all shades of the spectrum filled William Holman Hunt’s heady canvases, imbuing them with a rich, mysterious glow. Evergreen Linen’s deep, rustic green brought intensity and depth into his mythological scenes, whether indoors or out, invoking in them the awe and wonder of the English landscape. A leader in the Pre-Raphaelite school of painting, Hunt looked back to the innocence of medieval times, when art was more closely tied to the natural world; as a result, his colours and subjects seem to be pulled straight out of the ground.

Born in London, Hunt was the son of an office manager. It seemed he might follow the same path when he took his first job as an office clerk, but desire won over practicality when Hunt earned a place at London’s Royal Academy Schools in 1844. While still a student he befriended J.E. Millais and D.G. Rossetti and the trio would form the Pre-Raphaelite Brotherhood in 1848. In a shared statement they declared mutual desires to “study Nature attentively” and “to sympathise with what is direct and serious and heartfelt in previous art, to the exclusion of what is conventional and self-parading and learned by rote.” The name “Pre-Raphaelite” made reference to the unpretentious, honest nature of art made before the Renaissance, in a pre-industrial society, which they saw as rooted in the essence of the human spirit.

The care, precision and exquisite skill Hunt invested into his art attracted art collector Thomas Combe, who would become Hunt’s patron and business adviser, helping him to find early success throughout the 1850s. As an active Christian Hunt explored religious imagery in his early art, in a style known today as Symbolic Realism. Hunt’s famous The Light of the World, 1851-52 is a major work from this period, capturing Christ as a glowing night-time spectre against an emerald evening sky. Lamp-light catches his robe and ignites it with olive green radiance and it seems as though he is becoming one with the landscape around him.

Moving beyond religious subject matter, Hunt followed the writing of John Ruskin, who instructed artists to “go to Nature … rejoicing always in the truth.” Composed from observational studies made on the coastline of Hastings, Our English Coasts, (`Strayed Sheep’), 1852 conveys with startling realism the rough and tumble of the land, catching the momentary fall of light across crumbling rocks and meandering sheep, before it lapses into shadowy, earthy green bushes in the foreground. 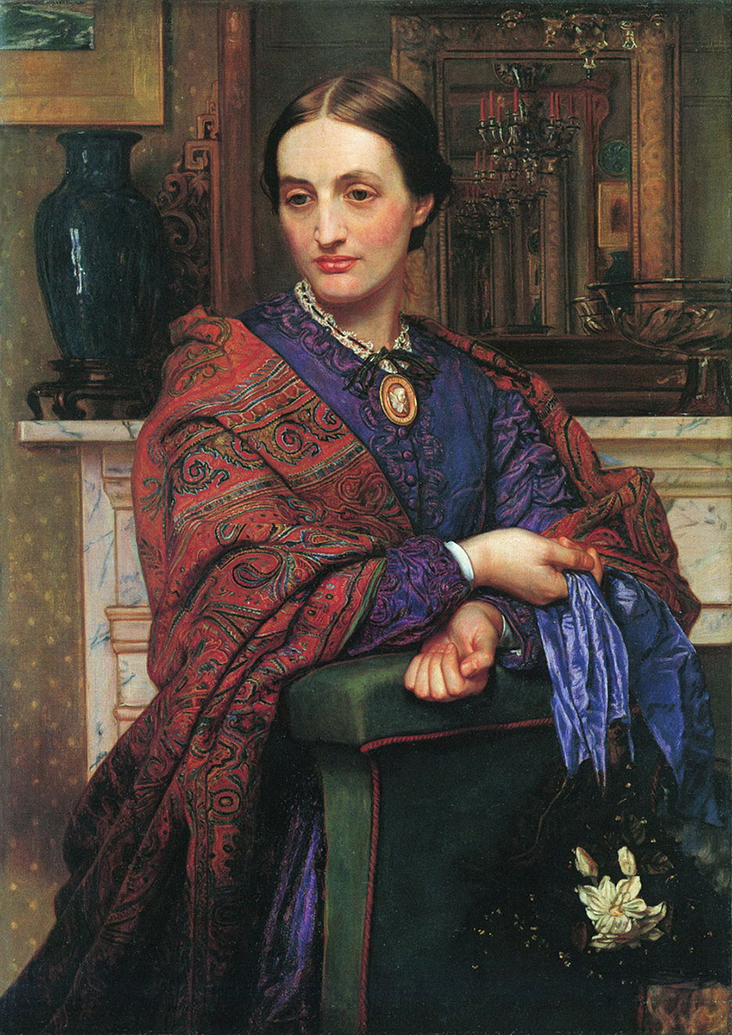 In 1854 Hunt travelled to the Holy Land, where the vivid light and rich symbolism became inspirational influences on his artworks which he would bring to England on his return. Moralising subject matter of his own invention appeared in paintings including The Hireling Shepherd, 1861, which captures a young shepherd distracted by the beauty of a young woman, who allows his sheep to run amok, a parable on the harmful effects of lust. Green forms a lush, fertile setting, falling from vibrant apple tones into darkened shadows, contrasting with the jewel-toned red of his muse’s dress.

Hunt married Fanny Waugh in 1865, although she died just a year later. In homage to his late wife, he painted the finely detailed and powerfully nostalgic Portrait of Fanny Holman Hunt, 1868, capturing his young bride’s youthful beauty amidst glistening, autumnal tones of burgundy, indigo and forest green that nestle with opulent indulgence around his beloved muse.

Colouring flowers, ribbons, veins and pulsing hearts, the iridescent crimson in BIKING RED Linen is the lifeblood of Frida Kahlo’s paintings. Echoing the tinge of red in the Mexican flag, this shade came to represent many forces in Frida Kahlo’s deeply introspective paintings, but a unifying theme was a love for her native Mexico, which…

EGGPLANT linen’s rich plum tone bled into Marc Chagall’s whimsical scenes, colouring them with stains as tart and ripe as fresh blackberries. Inventive colour was a vital strand in his fantastical scenes, taking his famous floating lovers, animals and musicians further from the realms of reality into a wondrous, escapist dream. He wrote, “Colour is…

First things first, this NICO pattern is great. Not only does it come in the most high quality packaging, but it is simple to follow, gives you three styles to sew, and looks brilliant when finished. This dress will fit perfectly into my wardrobe, and I bet it would look good in yours too. I…